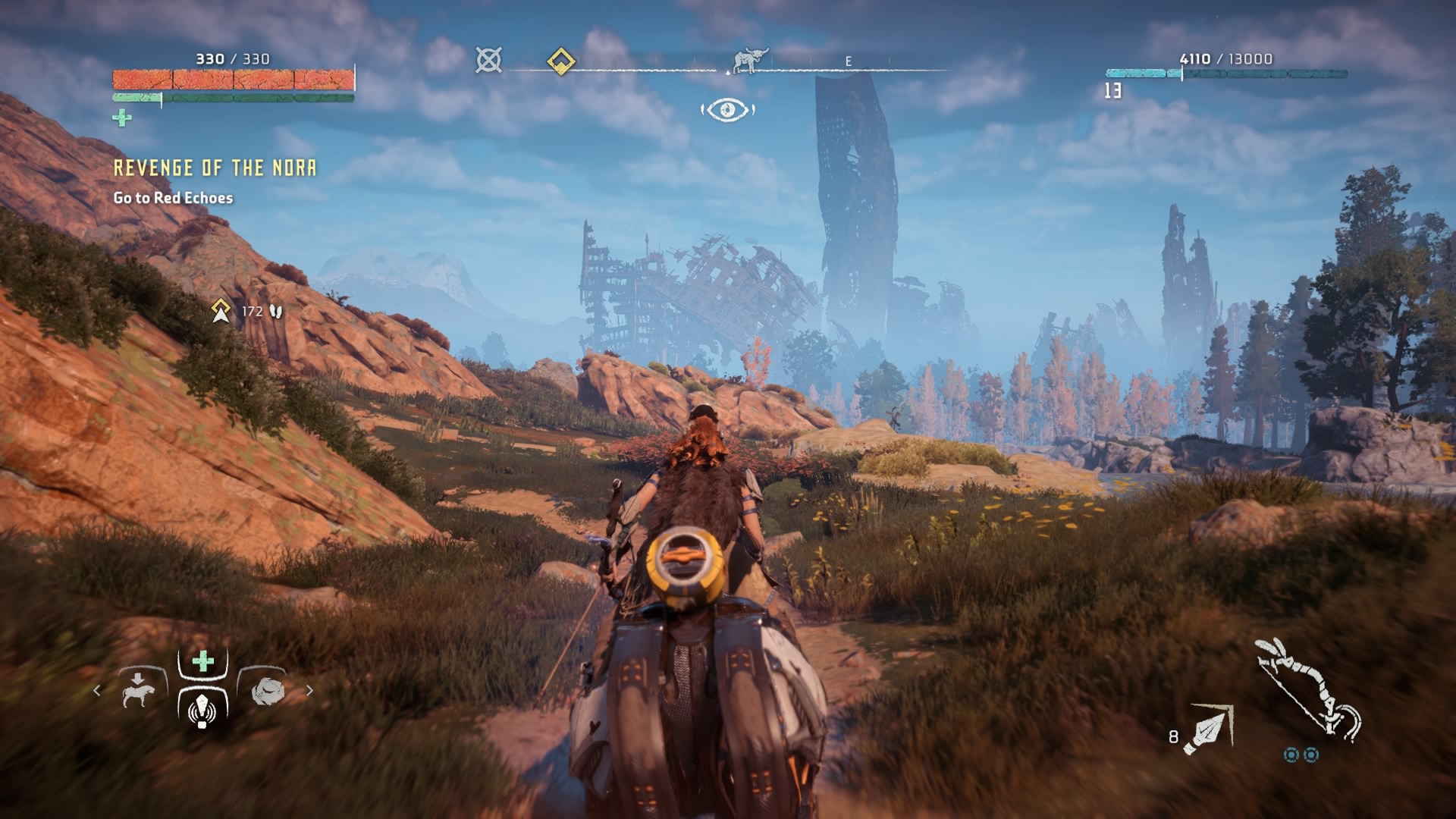 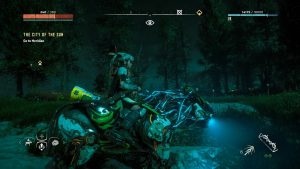 As far as big budget releases go you can’t get much bigger than Horizon Zero Dawn.  You would have noticed the adverts all over the shop, the TV segments and YouTube videos.  For the past month or so it’s been all about the robotic dinosaurs. With Sony apparently throwing all their money behind it Horizon was bound to be a commercial success, but it wasn’t bound to be quite as brilliant as it is.

At it’s heart Horizon is an open world explore-em-up, think Far Cry or Assassin’s Creed.  There is a huge map to roam around and this is scattered with side quests, collectibles, towers to climb up and of course robotic beasts.  So far so formulaic and the meat and bones of Horizon doesn’t do much to change this basic idea.  What this game does do well though is the combat with the robots.

The robot dinosaurs act like real creatures, herding and acting as you’d expect them too. Stuff like robo horses just stand around in groups whereas the larger cat type ones stalk about on their own looking menacing.  Some robots are easily spooked and should you make too much noise or shoot at one of them the rest are likely to stampede away, others will choose fight rather than flight and will come straight for you though.  And of course both kinds of dinosaurs can be mixed in together.  What these behaviours allow you to do though is plan an attack and sneak into an optimal position, prepping the ground with traps and trip wires.

Should your attack go to pot it will be all down to quick improvisation to save your bacon.  The beauty of the combat is that each encounter feels unique and unpredictable, the way it flows between being planned and being chaotic is wonderfully organic. 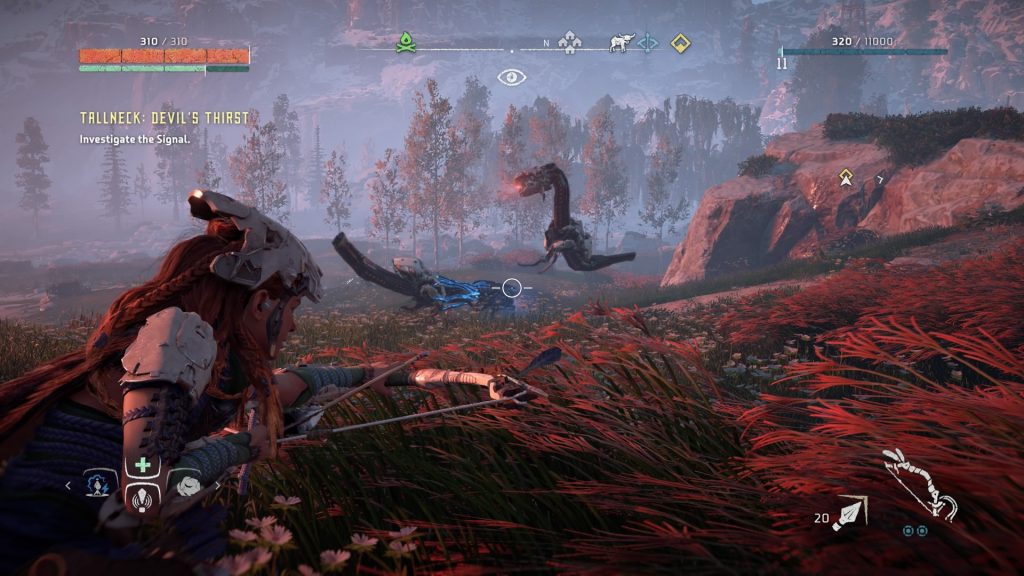 Playing as Aloy you’ve got access to a range of weapons, with a range of ammos too.  These include bows and a rope caster which can set traps and one which can tether enemies to the ground.  When you feel confident with all your options the range of combat choices is pretty vast, should you lay traps and then spook the herd to run into them, or should you call over a machine and covertly corrupt it making it fight for you.  The range of options is impressive, however it is very easy to just use the same tactics for each encounter and to get the most out of the combat experimentation is critical.

Unfortunately Horizon does a pretty poor job of explaining the differences between all these options, particularly in relation to the bows and their ammo types.  There are around eight arrow variants each with different effects, and these are tied to specific bow archetypes.  So in action what this means is you’ll be rocking three bows to make sure you cover all the arrow types.  The first time I met a merchant I was very confused over wether or not the bows on offer were better than the one I had. Not only does the game do a poor job of explaining these nuances but the icons and overall UI used to denote ammo types and weaknesses feels very busy and takes some getting used to. 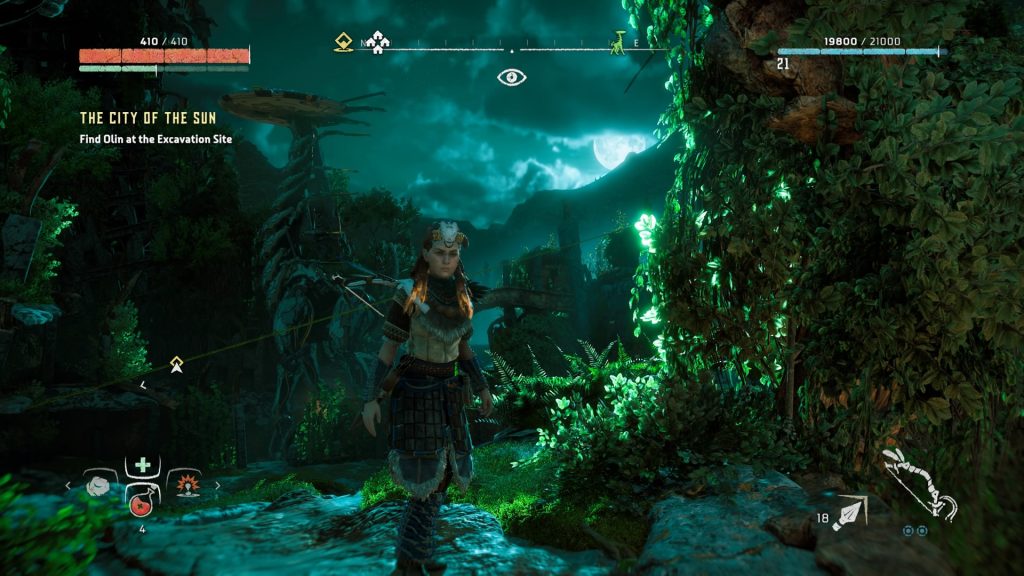 Now I can’t really go any further without mentioning how spectacular it all looks.  Graphically Horizon Zero Dawn is the best game I’ve ever set eyes on, and this is only on a standard PlayStation 4, so I imagine playing on a pro would be ace. The backgrounds and sky look beautiful and looking closer the wealth of detail on Aloy and the robots is breathtaking.  Throughout my time with the game I was regularly stopping to look at things and just take it all in.  Although it may sound shallow the graphics are really great and the game wouldn’t be as good without them.

Although things look nice there are some issues in particular with the lip synching.  It’s probably something to do with the uncanny valley where you notice discrepancies more, but often the lip synching seemed to be totally wrong.  The thing is this is only a little issue and is easily over looked, but when things look this good the small points stick out.

The story of Aloy is one of discovery and revenge.  Things start off small scale but, as the tale progresses,  gradually open up to larger concepts. It’s a tale which certainly got its hooks in me and I was very eager to see where the tale went.  The game also goes places which may not be obvious from most of the previous release images.  The world of Horizon encompasses lush grasslands, arid deserts and snow-capped mountains, and this is only above ground.  Scattered across the map are underground areas which give a glimpse of the pre apocalypse world, with decayed metallic factories and bases.  There really is a lot of variety to be had here.

Outside of the combat there is the now almost obligatory levelling up system and a boat load of crafting.  Experience from kills feeds into combat and resource gathering skills, it’s nothing too heavy and most of the skills only improve certain actions rather than adding completely new ones.  The resource gathering is a staple to the game though and you’ll spend a long time gathering stuff and making more arrows or bigger pouches.  I’m not a great fan of resource gathering but it was so easy here that it didn’t get on my nerves at all. 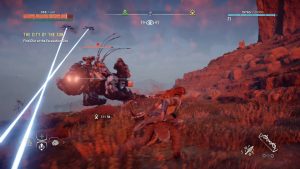 Overall then Horizon Zero Dawn is a brilliant game.  It has a great open world and the dynamic combat is a lot of fun.  This is also a visually stunning game and one which has to be seen to be believed.  This is an essential purchase, and Aloy is rightly the newest icon for the PlayStation 4.

Summary
A graphically impressive game, Horizon Zero Dawn offers an engaging open world and an interesting story. The combat is nuanced and taking down the larger beasts feels really rewarding. This is a must buy.