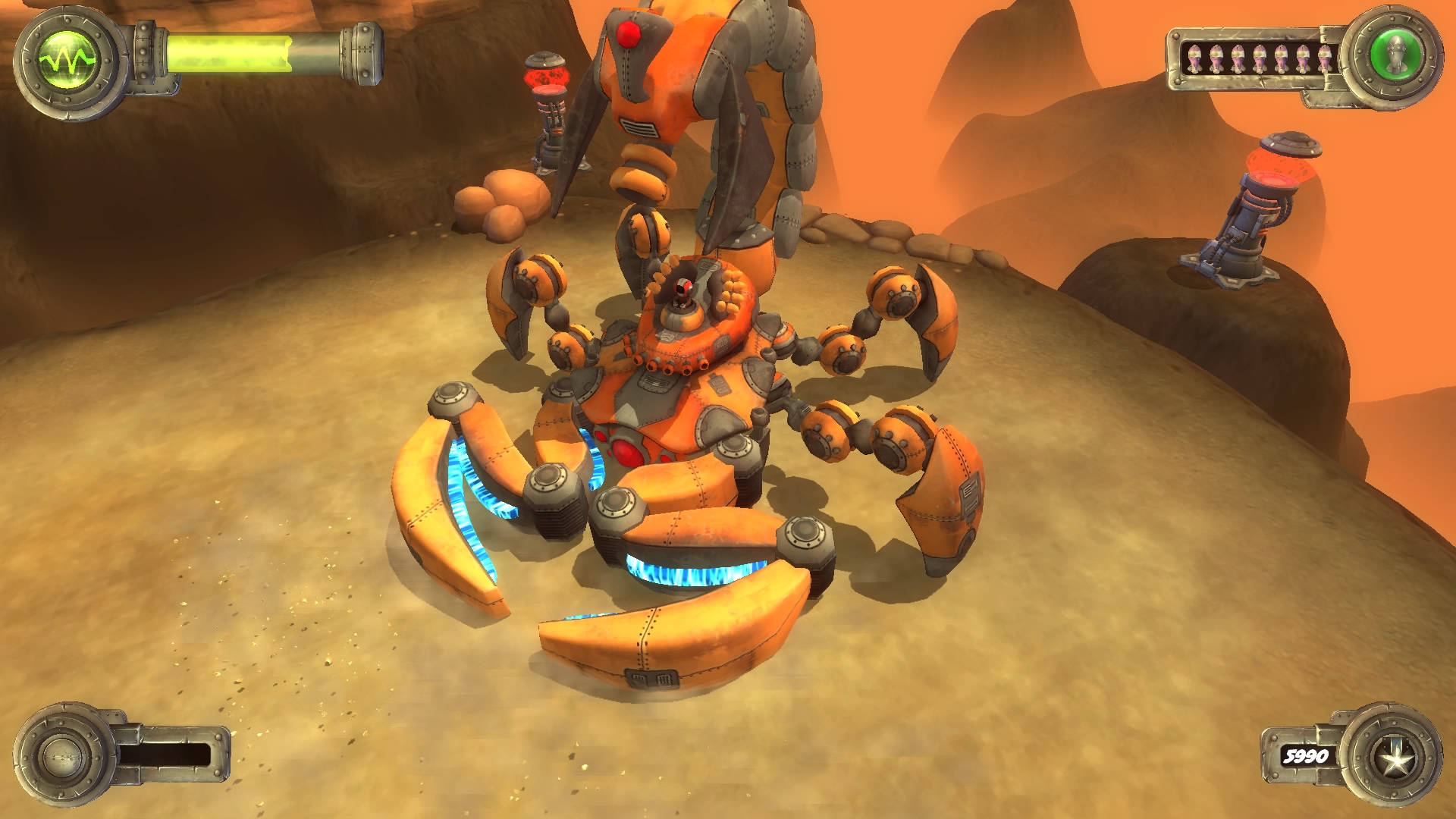 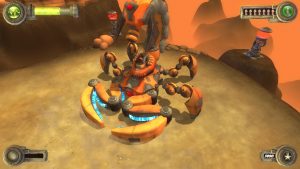 I know, I know. Another twin stick shooter but, to be fair to Eastasiasoft, this exact type of twin stick shooter is relatively rare on the PS4. Blue Rider is one of those ones where your ship is fixed on the screen and the left stick rotates the environment. Recent examples of this are the terrible Project Root and its slightly better follow up Dogos.

Blue Rider has a lot in common with both those games, to its detriment in many cases. It splits the game out to nine levels and each of these sees you flying around the level opening up laser gate things while various robotic enemies spray bullets at you. Each level then ends with a boss battle.

The core gameplay is okay. While Project Root and Dogos tended to be exercises in circling your enemy while trying to shoot them, the level design here doesn’t really permit that, so instead you’ll be trying to take out the enemy from range and using what ever nooks you can find as cover.

However, in comparison to those games your ship is a little bit sluggish and feels weighed down. The intertia on it also means that swift little dodging actions are difficult to pull off. For that reason, you are better off trying to capture the attention of one enemy at a time rather than rushing in. The net effect of that approach though is that the game can feel, dare I say it, a little dull. 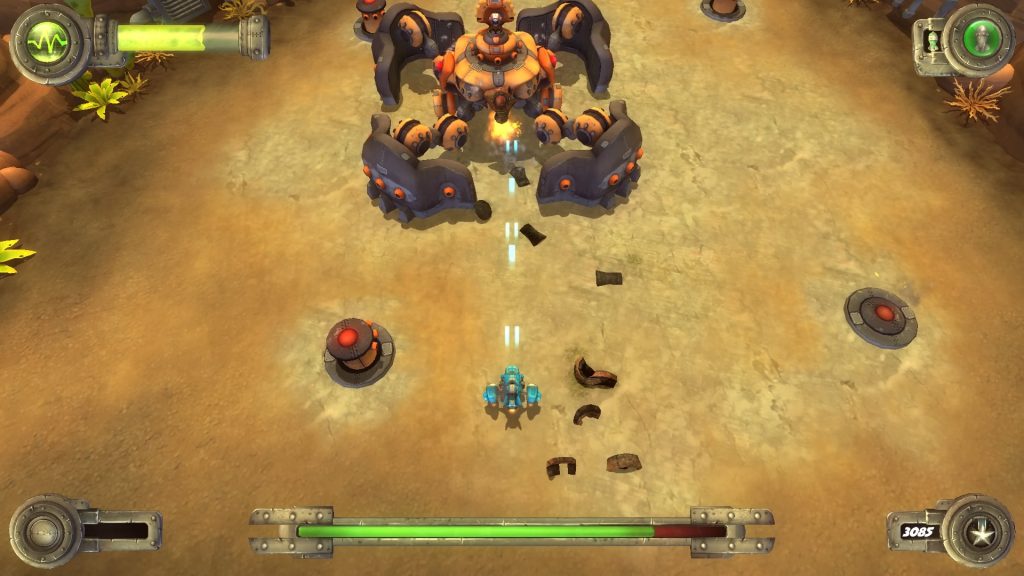 This isn’t helped by the fact that the levels go on for ages. Usually it is between 15 and 25 minutes which is too long for this sort of thing if you ask us. We didn’t like it with those other games and we don’t like it here. Especially as the game has no checkpoints, so painstakingly making your way through yet another samey level (variation isn’t Blue Rider‘s strong suit) just to die on the boss battle and then lose all your progress. Well, it gets old. Fast.

Once you’ve beaten a level you can replay it whenever. The game, by way of one of the loading screen messages, suggests that starting from the beginning is better as you’ll be slightly more upgraded later on but that’s a chore. Especially as the game doesn’t fix your damage between levels.

To help you there are power ups. You can choose between a focused line of fire and a spread fire gun. Spread tends to be best for the main levels where the focused version is better for taking out bosses. You can’t switch at will though which is a shame. 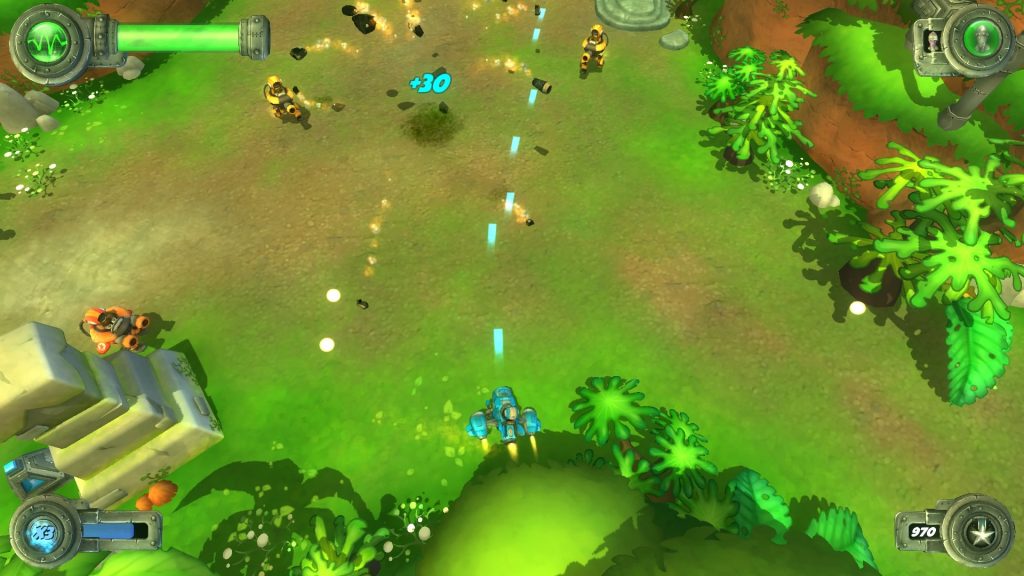 You also have a bomb/missile option that you can use in a pinch. I tend to save these for boss fights but on some levels you do tend to get ambushed and, at that point, you’re better off throwing everything you’ve got at the enemy because you’re not really given the tools to weave your way out of trouble.

Despite its many shortcomings, beating a level on Blue Rider is pretty rewarding. Even if the reward is another, slightly harder level to come. 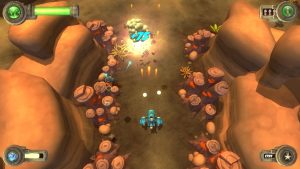 Visually it has a nice cartoony look although the enemy designs and environments are as generic as it gets. The bosses tend to be a little more interesting and they usually have challenging patterns to figure out (without going full on bullet hell).

As such, this is a game that is hard to recommend as a purchase. If it turns up on PS+ one day, we could see ourselves mentioning it in more favourable terms as something that is worth a look but this particular sub-genre of shoot ’em up really doesn’t work very well. If you’re going to make one, have lots of interesting (and powerful) weapons systems, better level design (oh, and would it hurt you to put in a map?!) and slicker movement.

But, as with Project Root and Dogos, Blue Rider is competent enough that we can’t slate it but so generic that it becomes boring. And shoot ’em ups just shouldn’t be boring.

Blue Rider
5 Overall
Pros
+ Competent gameplay + A good level of challenge + Well designed boss battles
Cons
- Overly long levels (with no checkpoints) - Lacks variation - Not enough weapon options
Summary
Blue Rider is the latest example of a sub-sub-genre of shoot 'em up that has never really worked. With its overly long, samey levels, it all starts to feel like a chore pretty quickly but there is a level of challenge here and some arcade fans may get something out of it. But, with better options out there, this is a game that is tough to recommend.