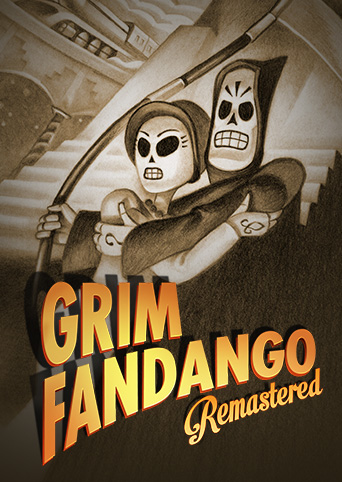 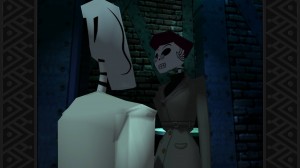 Grim Fandango is a relic. In the past decade of countless sequels and un-needed reboots it stood as an untouchable gem, a crown on the kingdom of the forgotten Lucasarts adventures of the past. As good as the game was it seemed incredibly unlikely we would ever see it again. That was until last year when Tim Schaefer announced that Double Fine and Sony have worked together and wrestled the license away from Disney who had bought and have more or less squandered the Lucasarts legacy.

There is not much I can say about the story without ruining the intrigue, so I won’t do that for the sake of spoiling one of the best examples of pen to paper that exists in our favourite medium. The story follows the hapless Manuel Calavera (but you can call him Manny.) He was once the top travel agent for those passing into the land of the dead, he would sell travel packages to the recently deceased to make their trip across the Eighth Underworld a safer and more pleasant experience. These packages come at a price of the actions that the person had committed during their time in the living world; The low lives and scum have to walk a four year journey across treacherous landscapes filled with dangerous creatures and in the company of others of their distinction. However if they were a saintly person who dedicated their lives to helping others then they would be granted an express ticket on the Number Nine, a direct four minute journey straight to the Ninth Underworld, the land of eternal rest.

Manny deals with the former, weeding his way through unworthy clients in a bid to pay off his debt for his own ticket to paradise. As he begins to suspect that his clientèle is being picked for him and that his colleague is getting all of the good clients he begins to uncover a truth that will send him on his own four year journey across the Eighth Underworld, chasing after a recently dead girl who wrongfully gets made to walk the dead wastes. Although you only control Manny you do meet a cast of colourful characters that help and hinder your progress throughout the story. This cast of Calaca style figures are what make this game special. Everyone has a story to tell and each character adds something, whether it be big or small, comedic or deadly serious. 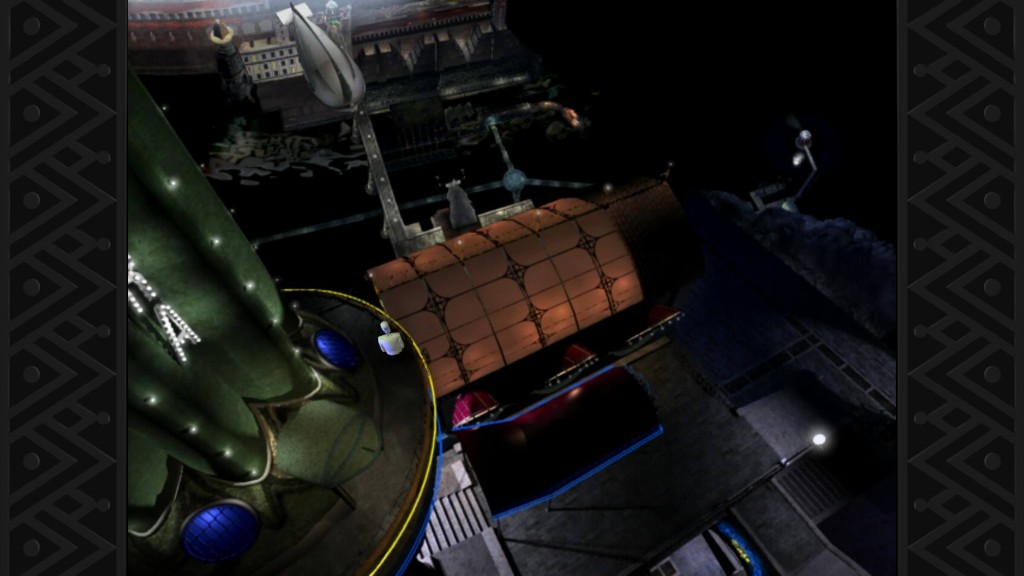 As treacherous as it sounds the Eighth Underworld is a joy to revisit. The pre-rendered backgrounds have been touched up to suit the modern consoles with a added dose of clarity, albeit in it’s squished aspect ratio. The backgrounds look just as good as I remember when I played back when the game first came out. Sadly the polygonal characters are also exactly as I remember, all of the characters bar Manny and his friends are quite jagged in appearance. I wasn’t expecting to have smoothed out models and rounded edges but I would have expected some of the fuzz to be removed from edges. There are also a few animation glitches which which occur during dialogue scenes and sadly some of the cutscenes which are presented out of engine. The spoken dialogue also features similar fuzz which can be quite jarring although it is quite understandable that Double Fine did not want to touch this to preserve the original work and I offer power to them for this decision. Others may find it a bit unsatisfactory though in this day and age. The music is one of the aspects that has received some loving attention, the smooth jazz and film noir style soundscapes really set the scene and they never get annoying to listen to, perfectly setting the mood while you ponder away at the brain teasers.

Grim Fandango is an adventure game so you should know how this works. You approach items and scenery with the left stick and then hit the X button to pick things up you can either use your wits or just rub every item on every piece of scenery to pass a puzzle if you cannot think of an answer. The movement is updated from the classic controls which were more tank like originally. This is referenced by the comical trophy which rewards you for completing the game with it. Good luck sitting through with controls like that though, Grim Fandango is already a slow paced game without having to worry about stopping to turn on the spot like you would in Resident Evil. Why anyone would want to play with this control scheme when a much better alternative is available is beyond me, apart from Trophy hunters of course. These updated controls are far from perfect however. There are a few moments in which they completely break on you. A scene I remember in particular is a part where you have to operate a crane on a cul-de-sac style island, an up and down movement would raise and lower the crane with a five second cutscene attached while the left and right controls just seem to do nothing. In the end I had to tease the crane around until it did what I wanted it to do, but not without spitting and cursing over the repetitive animation that kept playing when I messed up. Luckily these moments are fleeting, they could have been a larger, more considerable stain on such a great experience if not. 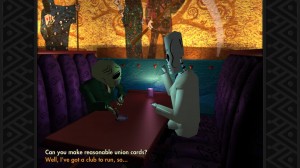 Speaking of the Trophy hunt I have to commend Double Fine for their selection of rewards. You could get most, if not all from a single playthrough but unless you are looking at a guide you are likely to miss at least a couple as they all involve exploring the game to its fullest and for a game like Grim Fandango with its beautifully realised world you should be doing exactly that.

Review 0
8 Overall
Pros
+ A classic style and setting, one that has never been replicated + One of the best stories in adventure gaming history + One of the most likeable protaganists ever
Cons
- Puzzles can be too convoluted at times with a lot of backtracking - Graphical and animation glitches can be jarring - Controls immensely fail during certain moments
Summary
I can't argue entirely that Grim Fandango is timeless. The polygonal characters and jarring visual skips are enough to accuse it of being incredibly dated. The story is what you should be coming here for though, that and the brain aching puzzles with the chicken with a pulley in the middle irreverence. This is a game that deserves your time and attention, whether you are returning to the Land of the Dead or you are new to this adventure.