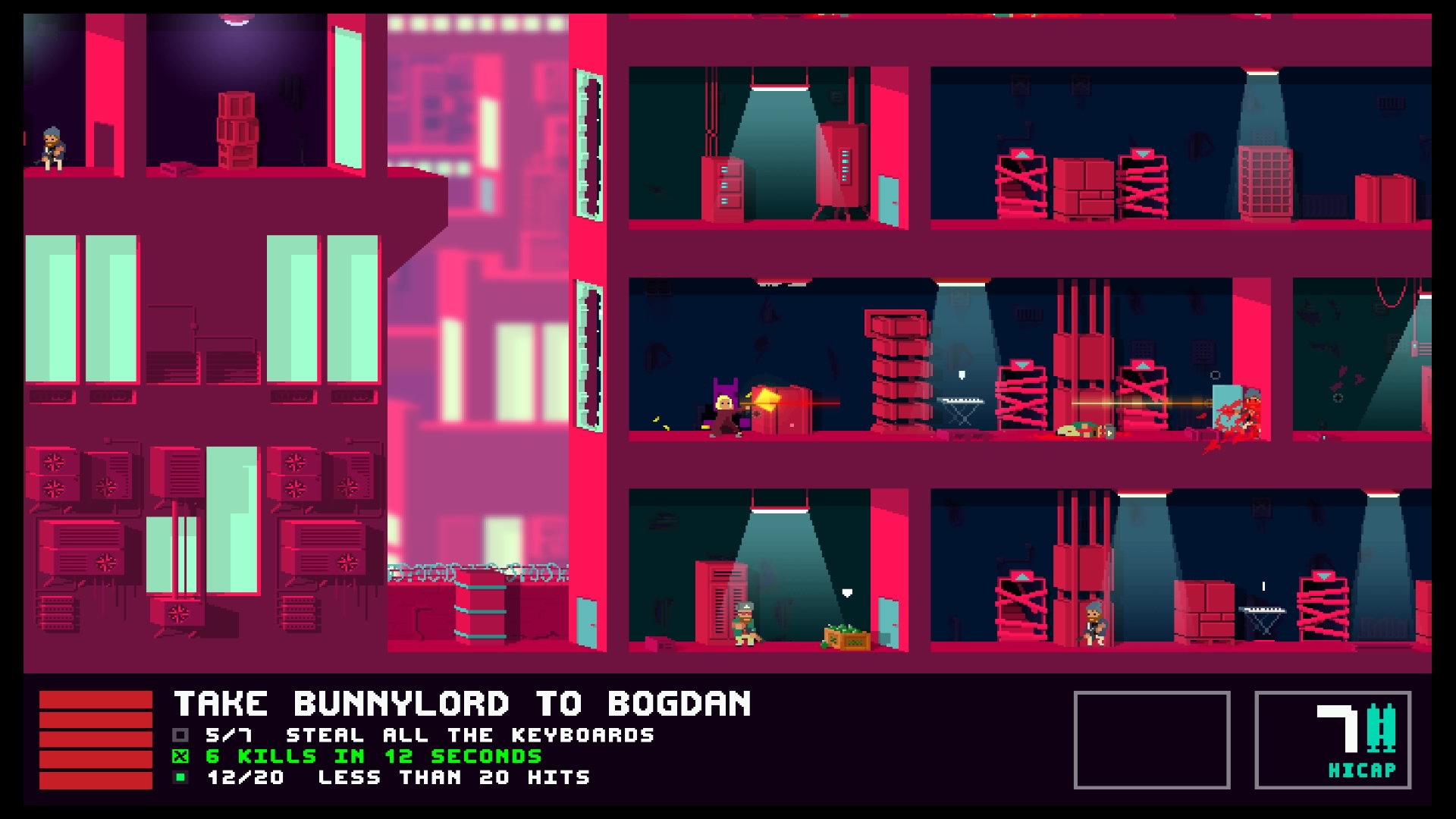 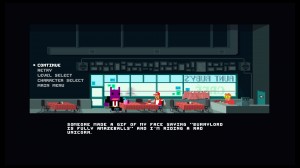 Following their sterling work with the OlliOlli games, Roll7’s reputation as one of the coolest developers working in the UK took another step up when Not A Hero landed on Steam last year and now it’s the turn of us PS4 owners to see what all the fuss is about.

Like OlliOlli, Not A Hero uses a stylised 2D retro aesthetic and cool electro soundtrack but this time the instead of skating along the streets, you now play as an assassin and it is your job is to clear out 21 levels full of enemies all in the name of politics.

You initially play as Steve, a sort of pixelised Danny Dyer, who works for Bunnylord who himself is campaigning to be the mayor.  The odd story doesn’t make much sense, it’s not really meant to, but it is there to break up the action with moments of surreal comedy and it works.  Bunnylord himself, a purple rabbit thing in a smart suit, is quite the character and his text-only monologues seem to go on for a while, the quality of the writing here is evident. 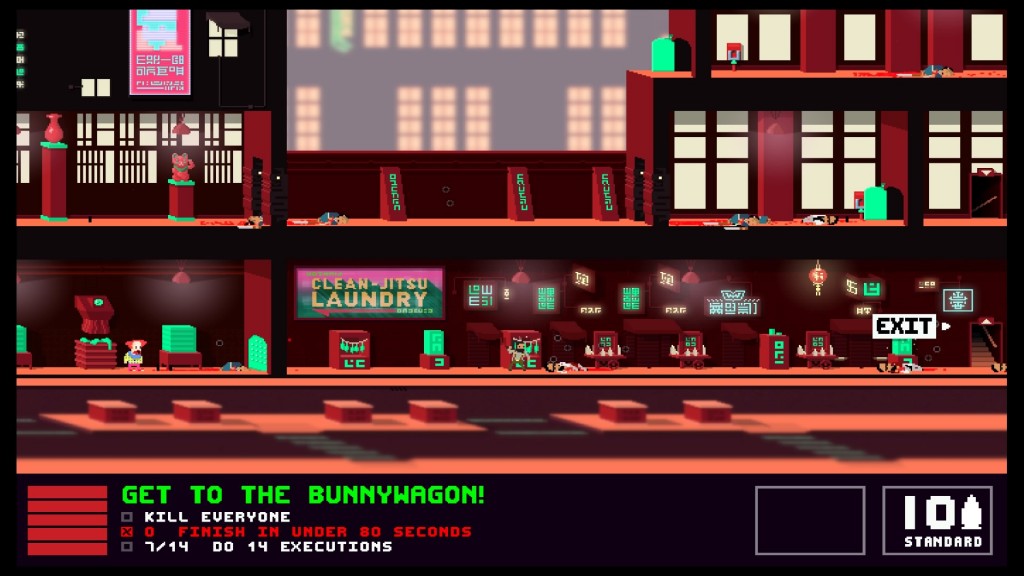 Each level has a main objective and three sub-objectives.  The more of these that you complete, the higher Bunnylord’s approval rating is.  These sub-objectives can range from using a minimum bullet count, beating time limits or rescuing hostages and these can all add a puzzle element (of sorts) to the action.  Adding some strategy to what would otherwise be a fairly standard run and gunner.

The gameplay itself puts you in a side-on 2D environment which can scroll in all directions, kind of like Metroid but without the sprawling.  You are armed and dangerous, able to shoot from distance or slide in and execute enemies up close.  There are nods to the Japanese bullet opera style of film-making that was oddly popular fifteen years ago and it does all feel pretty satisfying when you practically dance through a level, taking out enemies and avoiding damage.

As Bunnylord’s approval rating goes up, new assassins are unlocked bringing with them new weapons and abilities.  Playing with these is pretty enjoyable and some characters are certainly better in different situations than others which adds another layer of strategy to the game.  Each character has a unique look and personality too which brings more humour to the game and these give the game some much-needed variation. 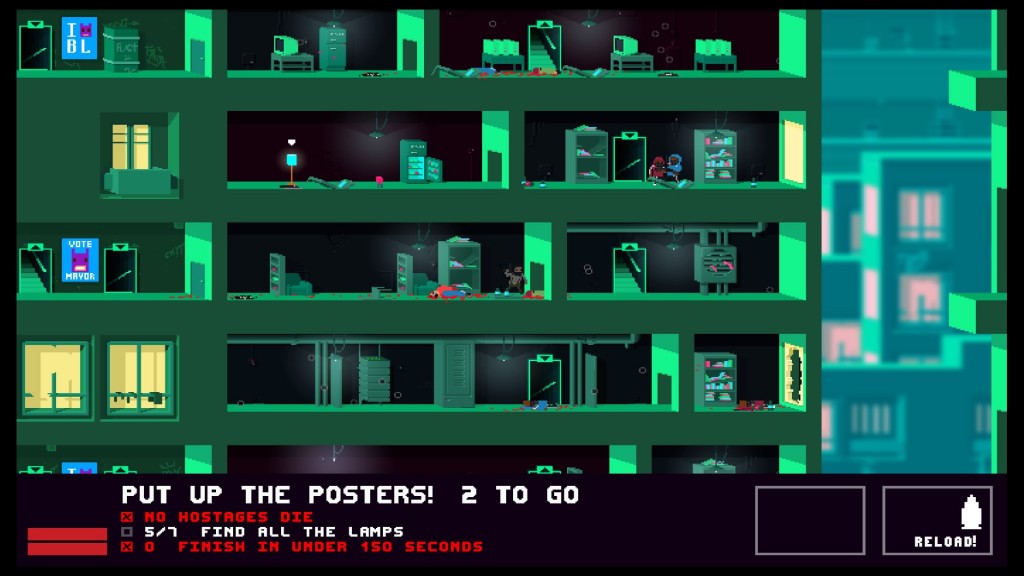 If anything, Not A Hero reminds us of Hotline Miami.  From the weird cast of characters and cool, retro aesthetic to odd, slightly dark story, there’s definitely a connection there.  It also shares some gameplay elements, despite the different viewpoint, as you often need to chain together moments of skill which can turn to moments of bad luck in a microsecond.

It’s not that Not A Hero is too difficult.  Sure, it ramps up a bit towards the end but is never savage but you need to keep your concentration and you do sometimes need things to go your way a little. Death can come super quickly and the game does get a little cheap later on by throwing in new enemies from areas you’ve already cleared.  Perfectly taking out a tough level to then find swarms of enemies dropping in by helicopter is somewhat frustrating when it ends ten minutes of otherwise perfect progress. 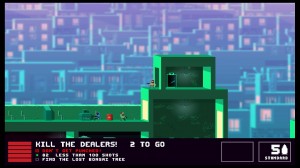 Perhaps the main flaw though is that there really isn’t much variation apparent here.  Level 1 to level 21 are all basically the same thing.  New enemy types are added but they tend to just add difficulty rather than any real spice but at least you’ll be unlocking new assassins to play as (although sadly Steve, the first one, seems to be the best).

It’s easy to like Not A Hero.  It’s smart and sassy and keeps the grinding and sprawl to a minimum.  It starts to sag after a while but the pick up and play nature of it means that it’s a game you can keep coming back to.  It’s not the best run and gunner we’ve ever played but it’s smarter than the average PSN shooter.

Not a Hero
7 Overall
Pros
+ Perhaps the coolest shoot 'em up on PSN. + Easy to get into. + Plenty of humour. + Stages aren't overly long. Great if you hate needless sprawling.
Cons
- It's 2D and it's retro, like everything else these days. - Gets a bit repetitive. - Some deaths can feel a little cheap.
Summary
Not a Hero is so stylish and violent but it can drag after a while. There's maybe more style than substance but overall this is a very good 2D shooter.