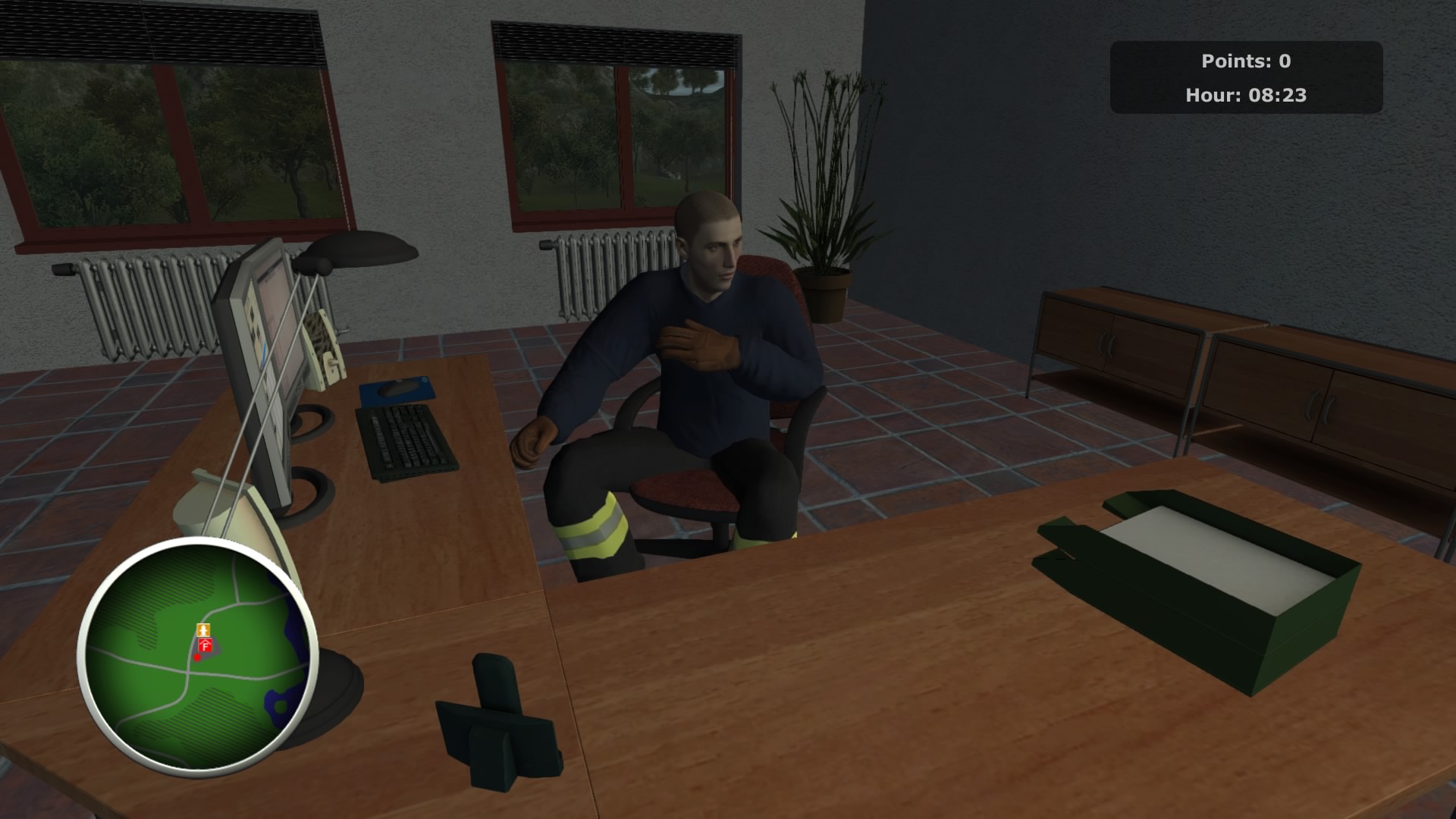 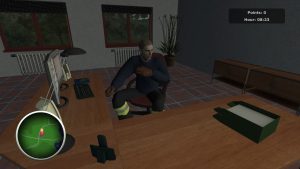 the risk of giving away my review within the first sentence, Firefighters – The Simulation is not a good game. Firstly some background though. This is a re-release of the PC game from 2014, a quick Google search brings up links to it being available on mobile devices too, so I’d set my expectations suitably low. The games website offers the tantalising prospect of rushing out on emergencies with a full crew and living the life of a real firefighter engaging in daily routines and driving a range of vehicles.

I’ve played and loved Farming Simulator 2015 for the PlayStation 4. Yes the controls are complex, it’s repetitive as anything and basically it’s a game about driving slowly in a field, but it managed to make being a farmer fun. It had decent graphics, a basic if well realised world, tonnes of varied activities, hundreds of vehicles and even a simulated wholesale market. These are all things Firefighters – The Simulation lacks.

The thing is as far as simulation games goes being a firefighting has to be right up there. There is boundless potential for exhilarating dashes through red lights to the excitement of entering smoke filled houses to rescue people. While Firefighters – The Simulation does portray these actions it manages to strip out almost all of the fun from them. 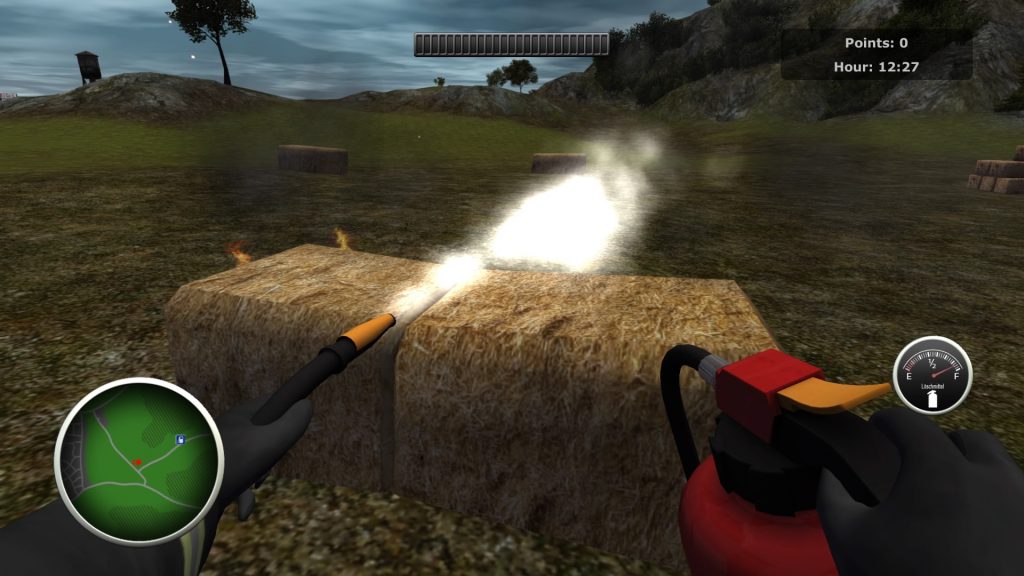 The game starts out with the player character receiving a briefing from presumably the fire chief, although this is a bit difficult to tell as there is no voice acting and the other characters just stand round looking like badly assembled mannequins. Oh they are all identical too, yes, they are all the same bald headed badly animated models. What is also odd about the characters in this game is the lack of collision detection. I was able to walk through my fellow firefighters like some kind of sad ghost.

After the morning briefing I was left to wander round the fire station at my own leisure seemingly without a goal. Although the game’s website boasts of loads of activities that can be completed here there is actually nothing to do. Walking into the canteen or gym sees other firefighters just sort of hanging round doing nothing, there are options to press a button at vending machines but once again this does nothing. After an interminable length of time walking round the firestation a message pops up indicating an emergency and it’s time to pop off to the rescue.

I mentioned above how this game strips all of the fun out of being a firefighter, and this is a prime example. I would have expected there to be a realistic fire alarm blazing through the corridors and a fire pole I could have dropped down straight into the engine shed. Instead there is a muffled lacklustre siren and a slow procession as the characters all make their way into the engine shed. It’s an odd procession too as all the characters in the game seem to glide across the floor, disconnected and seemingly unaffected by the laws of friction.

Once in a fire engine the poor controls really came to my attention. The user interface seems to have been designed with mobile in mind as all the actions are represented as grey squares at the bottom of the screen. Whilst this is handy to give me a constant reminder of what actions can I could do, it looked ugly and simplistic. 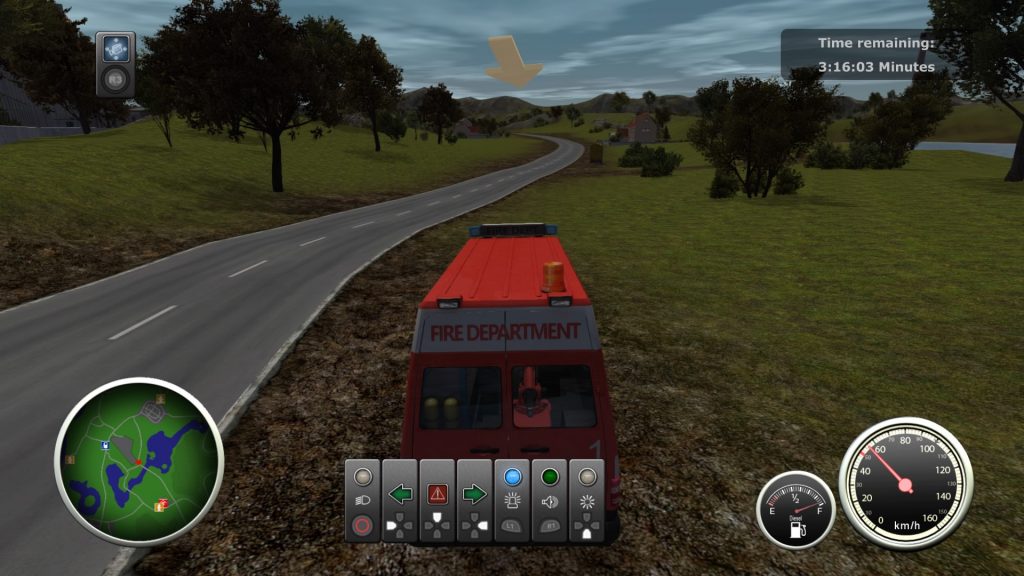 The fire engine I was in controlled like a barge, with floaty controls, a terrible turning circle and a really slow top speed. The lack of collision detection comes back again and the is time it’s the traffic on the roads which were unaffected by the engine I was driving.

Once at the fire the laughable graphics really take centre stage.  The smoke looks like somebody opened a bag of flour quickly and I was struggling to actually make out any flames at all.  Using a fire extinguisher or hose here allows the game to showcase some more terrible effects. There was zero enjoyment to be had in actually putting the fire out.

That’s all Firefighters – The Simulation has to offer.  There is a experience ladder to climb up, put out more fires and score points to access better engines, but frankly the game is so bad I can’t think of anything worse than spending more time with it. 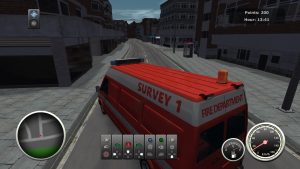 Firefighters – The Simulation is a terrible game in every regard.  It feels like this game was made on a shoestring budget, and then the developers took that shoestring budget and blew it on a night out leaving nothing to work with on the game. I experienced no enjoyment in playing this game and I doubt anyone else would either.