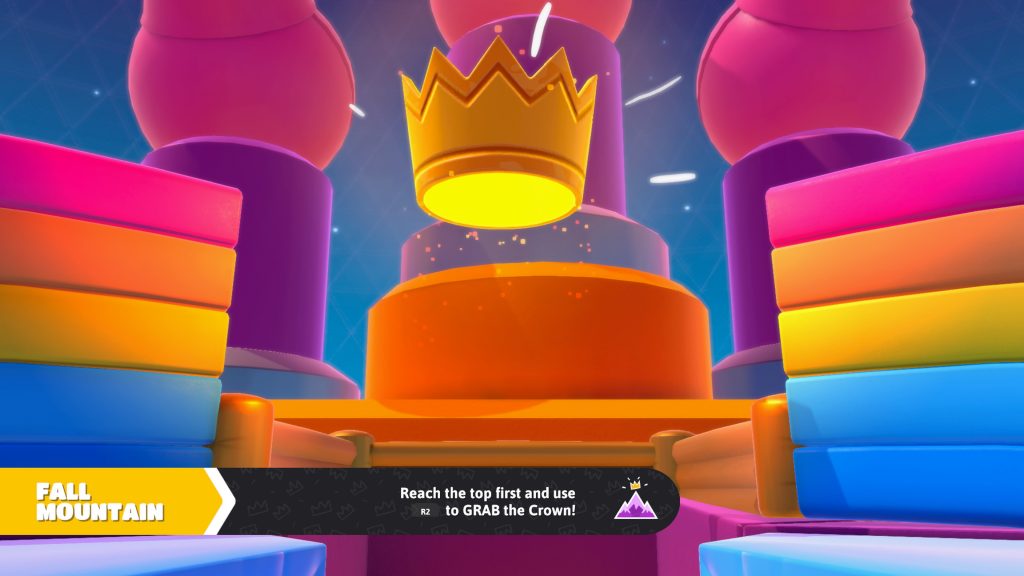 PlayStation Plus as a service can be a real mixed bag. While the online gameplay has improved significantly beyond the laughably latent PS3 era, there are some that still question why we need it at all. Certainly, I was in that camp not so long ago, letting my subscription lapse for a considerable break after not really feeling the need to get online and focusing instead on single player titles. It seems that beyond the online multi, the only real reason I was laying down annual wedge was for the free games that were being provided, which I mostly already played through or those being titles which really didn’t hold interest for me personally.

There have only been a couple of PS Plus titles which I could consider great, barring of course the random AAA wish fulfilment that occasionally happened. What I mean are those indie titles that launch on the same day, that are unique and benefit immediately from a large captive player base that are aching for something decent as a palate cleanser. Two immediately come to mind; Resogun, being the first PS4 freebie and a damn fine arcade shooter and who could forget Rocket League, which I am hard pressed to suggest that it would have done as well, if not for the fact that it was available on day 1 with Sony’s service.

While it may sound harsh as I am sure there are big fans of some of the offerings that Sony have provided, but to reach the Rocket League echelon, you must be something special, unique and accessible to the masses to even have a hope of continuing on as a beloved release. All being taken into consideration, if any game of recent memory has a shot at ticking those boxes, Fall Guys: Ultimate Knockout feels like one of those games. 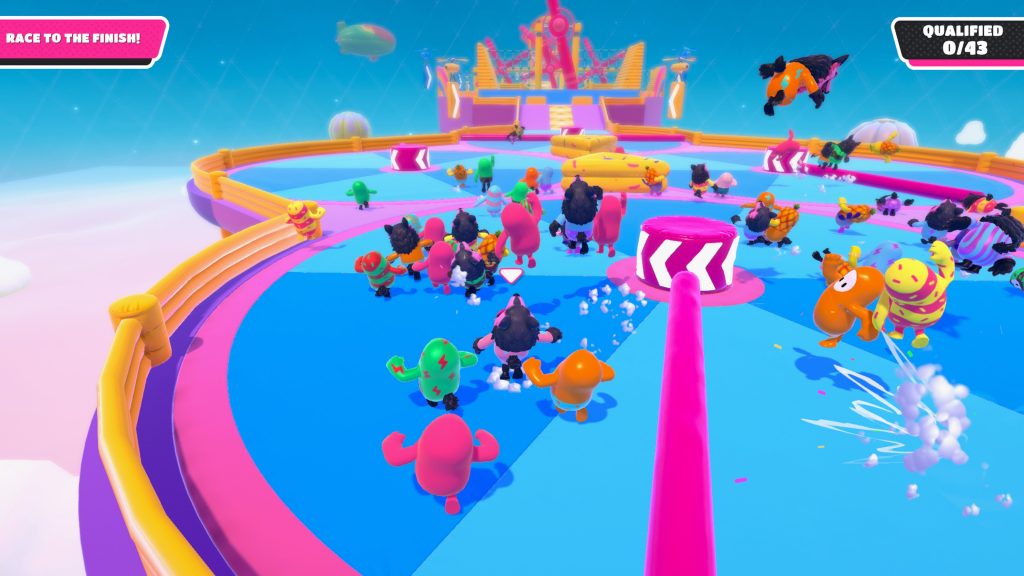 The core premise is simple, you play as one of sixty bean people and you must survive and compete in a series of TV show style minigames until you are the only one left as the winner. Games can range from races filled with obstacles, team-based sporting events, logic puzzles and platforming challenges. None of these games are particularly difficult to approach and any one player can pass by without too much trouble, but when you factor in a horde of bouncy, wobbly blokes trying to do the same, hijinx very much ensues. It cannot be understated just how much you can overstate your prowess at any event when you are one errant step or bounce away from utter failure. It’s as hilarious as it can be frustrating with all the emotions in between. No game from recent memory has made me want to punch the air in victory as much as throw the controller across the room as this.

The key to all this is in balance. You could be the best Super Mario player in the world, able to navigate pixel perfect platform spacing, juggling obstacles and items as much as you like, but it doesn’t matter a jot if the dice rolls and you are out of favour. Take Fall Mountain, one of the stages that decides an overall victor. There is so much stuff being thrown at you, that going fast or going slow is about as equally effective with the winner being decided not by skill alone, but by a hint of RNG that affects all aspects of the stage. It’s the gaming equivalent of watching Takeshi’s Castle, watching the sure-footed Japanese fellow as he races over the skipping stones, only to be caught out by the last one and taking a face full of dirt with him to the shallow pool of sewage water.

The other area in which RNG comes into play is within the team games. If an equal number of players gets eliminated in an event, then you usually see one of these crops up with teams of two to four groups being forced to work together to achieve a simple goal. These can range from capturing tails from opposing teams, jumping through hoops to score points to mini football (proper football that is) games that have players working together to score goals. You are only ever as good as your team in these rounds and it’s easy to see why these modes have seen derision in some of the players that have played Fall Guys so far. Personally I like the team games, as much as the single player ones, they are every bit as nail biting because of the loss that comes with being on the losing side and when you get a good team, nothing feels finer that utterly trouncing two other groups with a double digit lead. 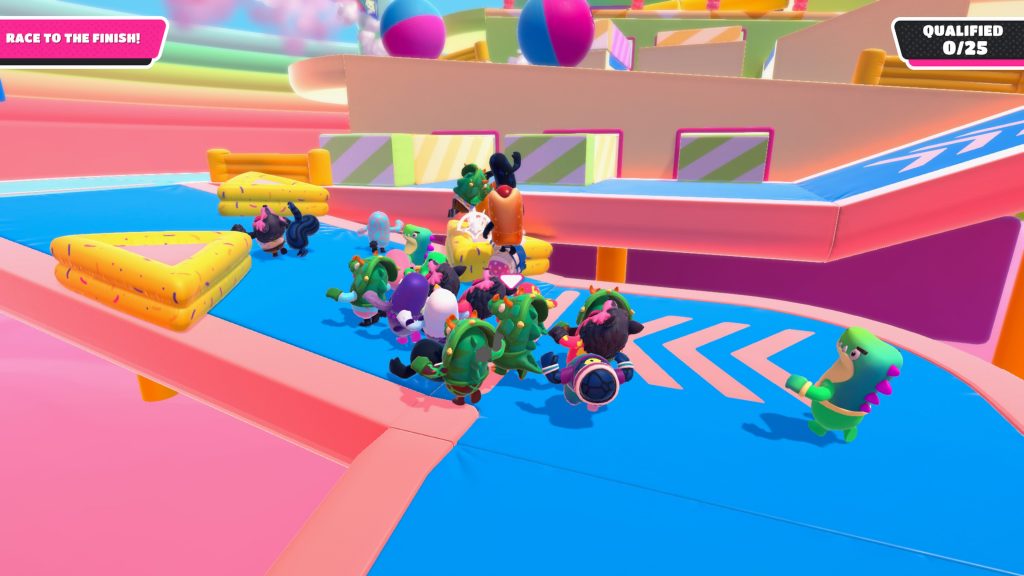 With everything seen so far, Fall Guys is a damn fun game and there is much credit to give to the team at Mediatonic for not only being the first to utilise the genius pairing of Total Wipeout meets Battle Royale, but sticking the landing for the most part. There are unfortunately some areas where the experience face-plants somewhat.

Currently, we are in the first week of the game being live and as such there are several server issues that are cropping up as a result. These are nothing new to the guys that remember Rocket League when it first launched but that it can be quite shonky during peak playtimes. There are also some infrequent glitches that can ruin an otherwise surefire win. For example, I encountered on two occasions in game ending Hex-a-gon where my character would fall through a solid platform, ending in a failure. Also, tail tag events can be a bit random as to whether you are able to capably steal a tail from an opponent when the rules don’t seem to apply to the others you are up against. Admittedly, this could be internet latency as a result, but it’s hard to say when everything else runs so smoothly.

Also, while there is a fair amount of minigames to play through, these often repeat themselves from show to show, meaning that the game gets a bit repetitive during a long sitting. That’s not to say that this is exclusive to Fall Guys however, Battle Royale games have a tendency of being that way, it lets players get used to the mechanics of each stage without alienating players when it comes to the next time that stage shows up. It depends wholly on how you feel about the core experience as to how much you will get from Fall Guys as a whole. Personally, I can see this being a great go-to title that I won’t mind picking up from time to time, also, with the fact that we appear to be in the first season, I am sure that the team at Mediatonic and Devolver Digital will be pushing for more content down the line (and they better.) 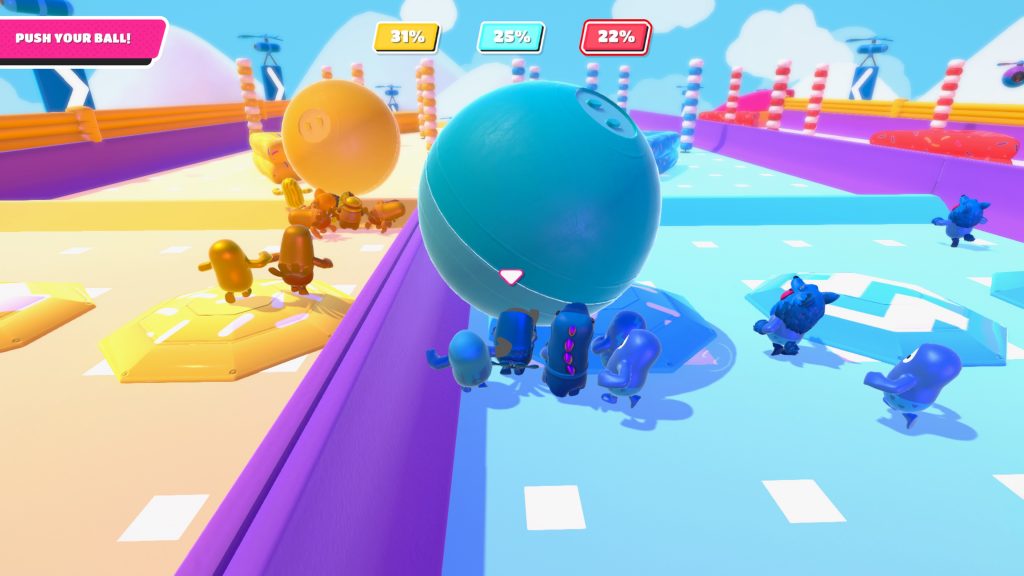 Lastly, one of the aspects that feels most strange to me is the lack of meaningful squad gameplay. Inviting friends to a party doesn’t really add much more than someone to talk to and share the experience with. I can only hope that in future there will be a squad mode of some kind, which would see minigames geared at groups of four with joint wins as a result. We will just have to wait and see.

Lastly, it’s rare that I would mention microtransactions in a game review as I personally ignore them as a rule. When it comes to these for Fall Guys, I was surprised to see how much of the in-game costumes, emotes and cosmetics are achievable through play. There are two currencies, you gain kudos points for competing in events, with bonus’s given for first place finishes or wins. The second currency is crowns, these can only be obtained by winning each series of minigames and honestly, I feel that this is best way it could have been handled. There are no pay to win mechanics here and if costumes are your thing, there is a fair amount on offer that you don’t need to reach into your wallet for, which is a big plus in my book. 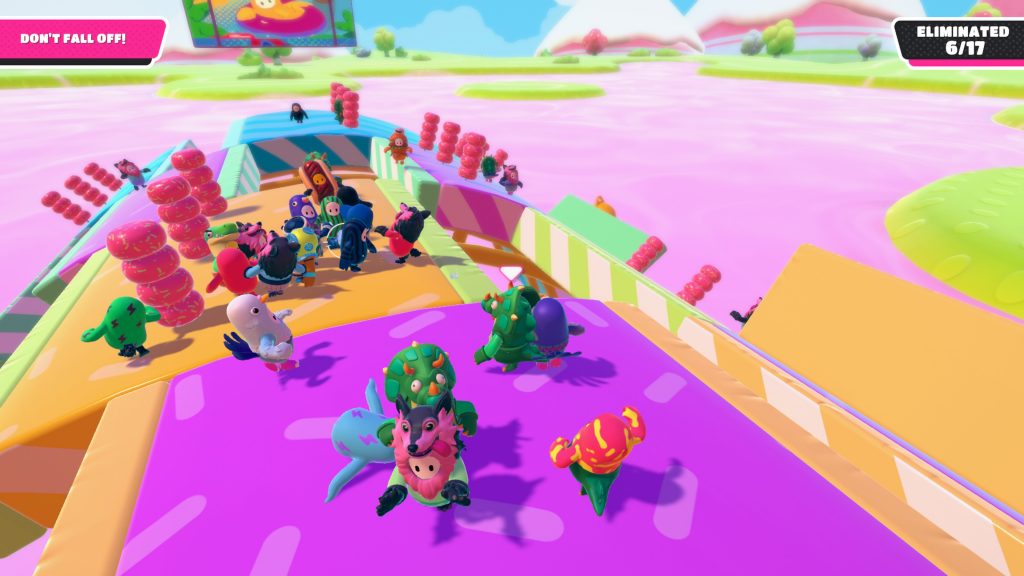 Overall, Mediatonic has pulled together a brilliant combination of genres, one that I am sure that other developers will kick themselves for not thinking up first as Fall Guys: Ultimate Knockout achieves something that most other games, let alone Battle Royale titles can. It may be at times frustrating, random and friendship breaking, but it is almost always fun.

Fall Guys: Ultimate Knockout
9 Overall
Pros
+ Very easy to get into, little to master but oh-so moreish
+ Surprisingly fair and balanced, with minigames that don’t rely on skill alone
+ The most unique Battle Royale game on the market
+ Captures those Takeshi’s Castle vibes perfectly
Cons
- Some minigames can get a bit repetitive over long sessions
- Buddying up with friends doesn’t really do anything special yet
- Early server issues which can rob rewards and cut games short
Summary
A fine mix of Takeshi’s Castle absurdity and nail-biting Battle Royale action. Fall Guys: Ultimate Knockout is the ultimate palate cleanser, almost always fun and enjoyable over long or short bursts of gameplay. Time will tell whether this hilarious and silly game will have longevity but with new levels, costumes and features on the way, the good times are sure to keep on rolling.