This week’s Ratalaika release is Prehistoric Dude, a 2D Metroidvania-style platformer. Yes the platinum is easily obtainable and done so before you finish the game as usual from this publisher, but is it worthwhile otherwise?

You play as Dude and his lunch has just been stolen by a large dinosaur and you want it back. It’s told in some stylised but not unpleasant looking stills but that’s the whole reason for your ninety-ish minute adventure. 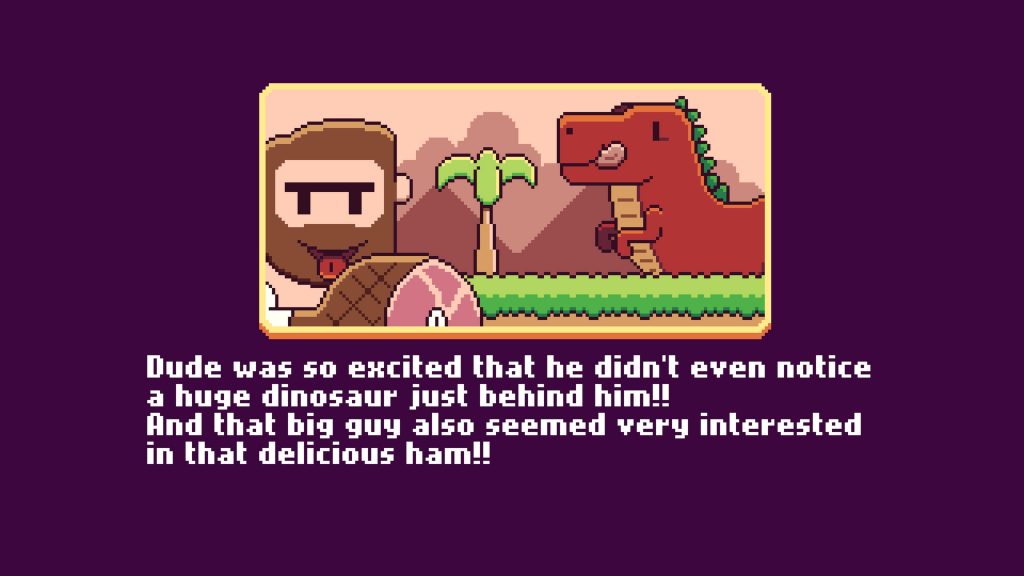 Being a Metroidvania you start off with very little in the way of abilities but will find new ones either in the world or through defeating bosses. You’ll then use these new abilities to progress or return to previous areas and gain new abilities or upgrades through exploration.

You start off with the ability to jump and throw limited axes and that’s it. The controls are fine, though they can get a bit squirly in close quarters. As you run and jump around there will be enemies which sometimes drop items (each enemy dies with two hits from axes) and there are tufts of grass which sometimes drop items as you run through them. Axes are what you attack with but you can also find healing items and fruit, which acts as a type of currency.

Sometimes you’ll encounter closed doors that will require a special stipulation to progress. A silver key generally blocks progress and you’ll need to explore the local area, moving to adjoining screens in order to find it. Other doors can be blocked requiring you to flip all the switches in the area or kill all the enemies. Then there are fruit doors which need one hundred fruit to open. Fruit is easy to come by but if you die then you lose half of what you’re carrying. 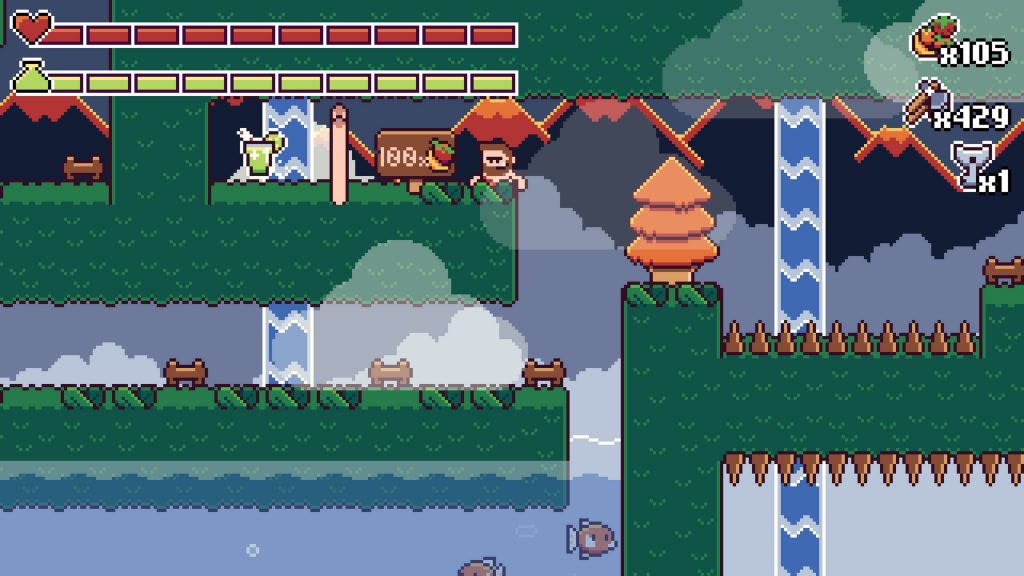 These doors can block the way to a key but they can also hide upgrades to your health or stamina. You only start with two pips of each but will gain plenty if you explore thoroughly. You can also find chests but these only contain a bunch of items you’d find in grass normally, like some axes and fruit. Nice but not really a massive reward.

As you’d expect from this type of game you’ll be running from screen to screen, filling out a map on the inventory screen represented by blocks linked together. At times you’ll find puzzles you can’t complete or platforms you can’t quite reach. If you move on you’ll eventually find the item that will grant you the ability to defeat these obstructions, with the popular double jump and the ability to push blocks some of the first you’ll find. As it’s such a short game there aren’t any other real game changers, except for one which I managed to miss for a long while before going back. 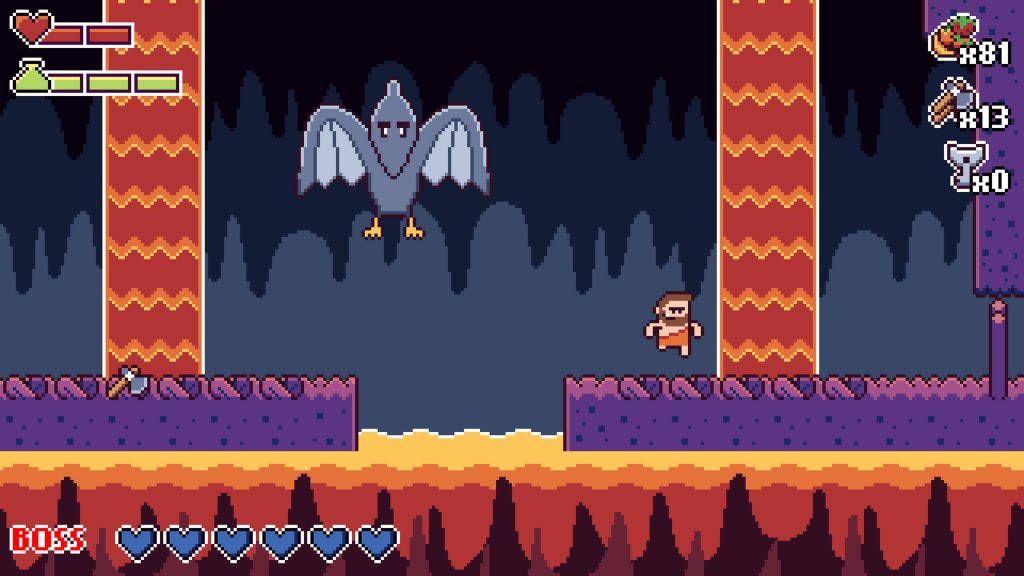 That was the club, a melee weapon which uses up stamina but means you no longer have to rely on limited axes. I had progressed, beaten the first boss (out of three) and was in the second area and I was suddenly getting wrecked. I was getting through areas but I had to stop killing enemies because I didn’t have enough axes and they weren’t dropping enough to sustain my bloodthrist. This was a problem when I reached an area that required me to kill all the enemies to open a gate as I didn’t have enough axes to do so and trying to just run back and forth to collect more resulted in me losing more than I was gaining.

At this point I thought the game was terrible, but really the game had just let me progress without an item that was basically a necessity. In fact once I had backtracked to areas I hadn’t been and found the club I barely used the axes. You’d think a limited resource would be more powerful than an unlimited one but apart from being ranged they are far less useful as the club kills things in one hit. After finding this the game was much more playable and I’m not sure I died again now that I had the tools to defend myself. 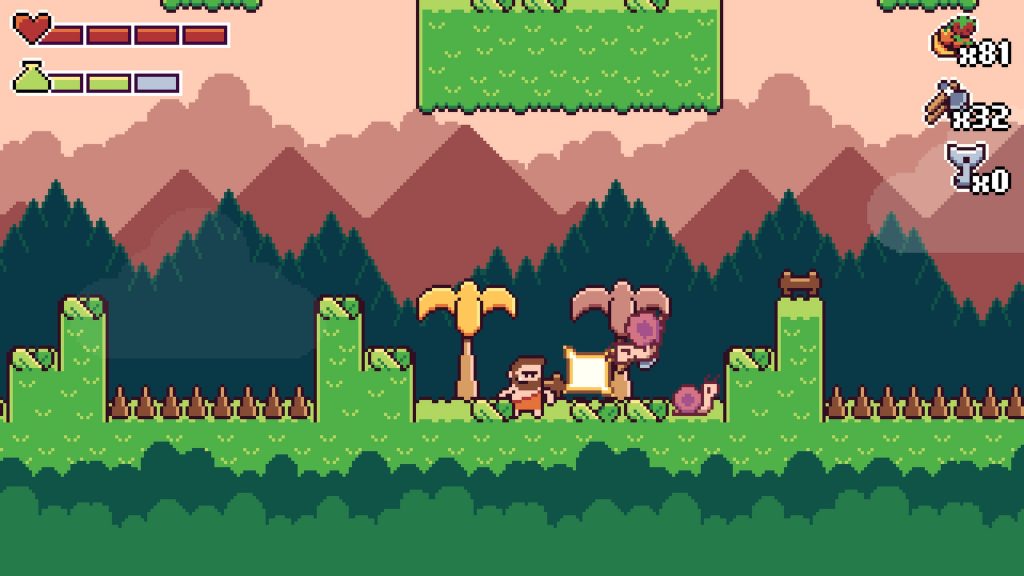 Despite this setback I still got the platinum in the game in under an hour. You get trophies for doing certain things the first time and finding the early abilities. I think you get the last one after fighting the second boss assuming you’ve been thorough up to that point. I finished the whole game, 100%, in about ninety minutes. It felt about right however as the third area was a bit of a chore to explore, basically forcing you to move through screen after screen just to get the key required to progress with little variation in location or visuals. The final area was better thankfully.

Speaking of visuals Prehistoric Dude goes for a retro 2D look as you’ve probably come to expect. I’d say they’re faux-NES quality and although perfectly pleasant aren’t particularly inspired and the bosses are very plain. There are a couple of environments but there’s not a whole lot of variety there either unfortunately. The music is decent and chirpy but I did find it got on my nerves after a while, again thanks to repetition. 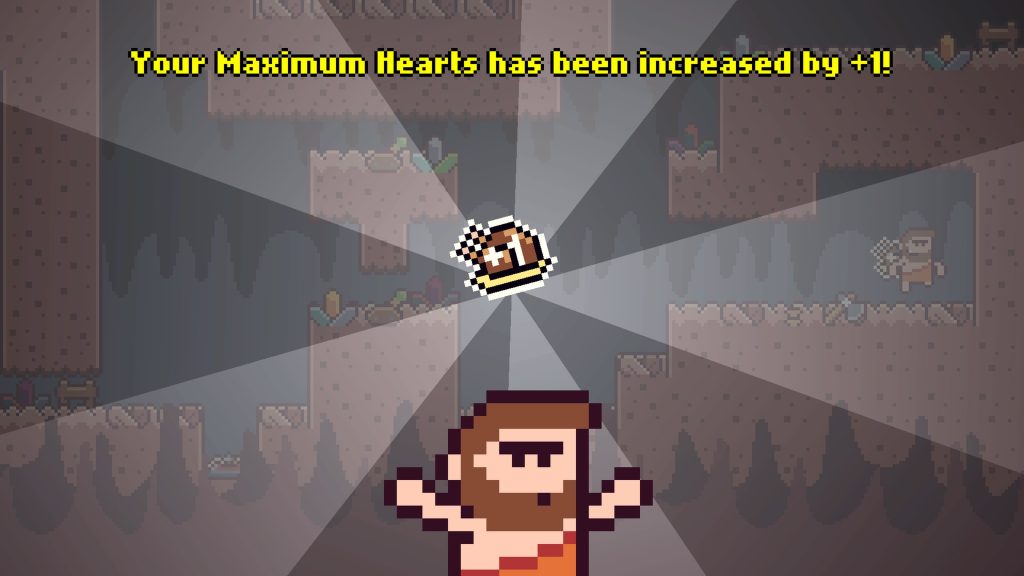 Ratalaika releases another easy platinum in Prehistoric Dude and if that’s what you’re looking for then you crack on. Ultimately like Clash Force I think this is a fine experience for the short while you’ll be playing it but it won’t leave any sort of lasting impression. There are lots of great Metroidvanias out there but if you’re on a budget then Prehistoric Dude will entertain you for the length of a short movie.

Prehistoric Dude
5 Overall
Pros
+ Enjoyable enough whilst it lasts
+ Pleasant visuals
+ Easy platinum
Cons
- Make sure you find the club item!
- Areas are repetitive
- Very short
- Exploring isn't massively rewarding
Summary
Prehistoric Dude is a short Metroidvania-style title with an easy platinum trophy thanks to Ratalaika. You'll have forgotten all about it after a good night's sleep but it's enjoyable enough whilst it lasts.