The sequel to the 2015 title The Escapists has landed on the PS4. The Escapists 2 promises more of the same, but improved in every way. That can only be a good thing, right?

As the title may give away you play as a convict who must find a way to escape their incarceration. I have to admit to never playing the original, though the style and premise interested me. I am aware that the first game left a little to be desired as far as teaching you the basics of the game though and in that respect the sequel is at least a little better. 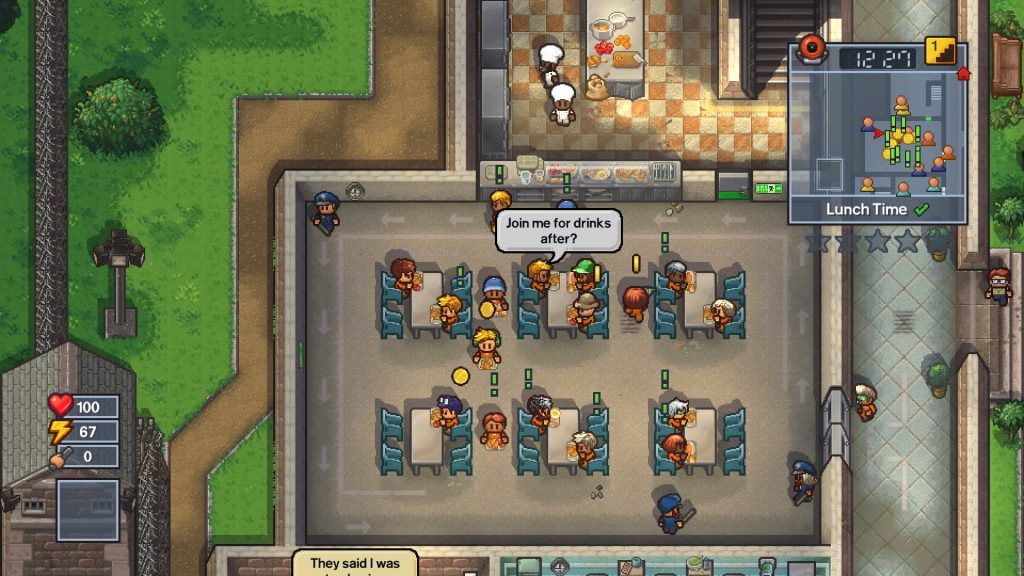 There is a tutorial level which is its own prison designed specifically to teach you how to play. Told in flashback by the character you’re controlling, it’ll give you the basic controls and gameplay mechanics to allow you to function as a prisoner and amateur escape artist. What it doesn’t do is teach you how to plan an escape or spot weakness in security, that’s down to you and good ol’ trial and error.

There are ten prisons to tackle, each quite different from the last but the majority play out in a similar fashion. Firstly you must follow the rules of the prison, which means attending every activity that the prison schedules for you. There’ll be a couple of roll calls a day, exercise time, shower time, meal times and jobs to attend as well as some free time to enjoy. Miss any of these, especially roll call, and the guards will grow suspicious of you and your activities making things more difficult for you. Keeping the guards happy whilst making inroads to your escape is the aim of the game.

There are many, many ways to escape prison, some easier than others, so identifying a plan of action and then working towards it will be the main challenge you face. You may notice a blind spot in the guards patrol routine and decide to dig your way out there. For that plan you’ll need a decent shovel and some supports for your tunnel. Maybe you want to get through the fence, that’ll require wire cutters. Maybe you think you can simply walk out of the front door with a disguise. All of these approaches will need for you to search the prison for items to craft what you need. Searching other inmates’ desks on the sly is the main method but you can buy items from other prisoners using money earned from helping them with tasks or from your prison job. 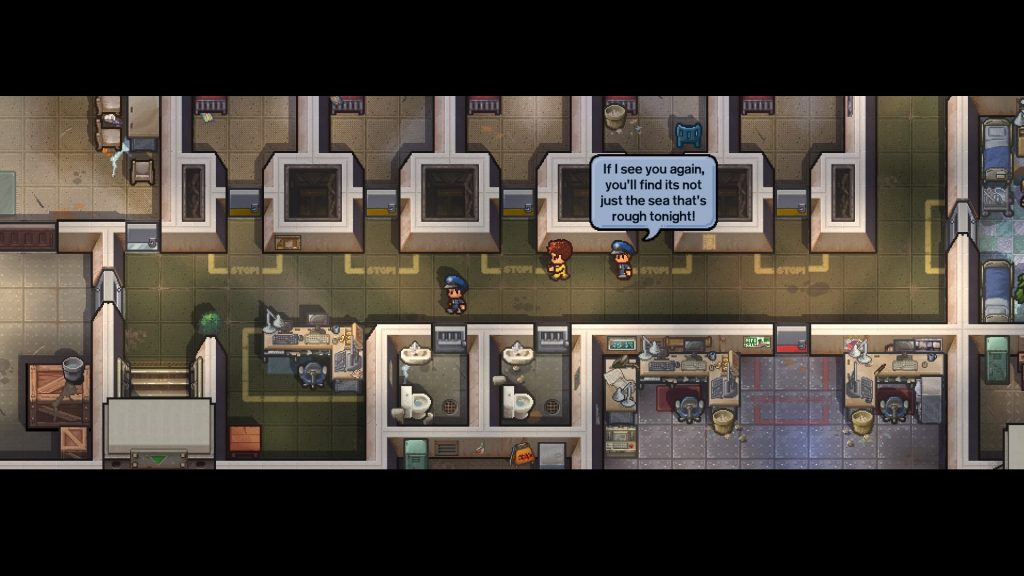 Crafting requires intelligence which can be gained through studying. A bit of muscle wouldn’t hurt in case you get into a scrap which means working out at the gym. You can also gain stamina at the gym which will let you dig/cut/whatever longer before needing a rest. Each tasks you with a basic mini-game of tapping or holding the triggers on the controller and the gains come thick and fast.

Falling into a routine of simply following orders can be all too easy, but doing so won’t get you any closer to freedom. During free time, or any other time you manage to get away with, you’ll want to poke and prod at the defences to see what you can get away with and what will ultimately allow to you get out. Pushing too far will land you in hot water with the guards and any contraband will be confiscated, so being careful and hiding anything that is precious to you is important so you don’t have to start from square one. There is a hidden compartment in your desk for such items but space is limited. Smarter still is, if you can get up there, hiding it in the air ducts where they’ll never be found.

Once, or maybe if, you do manage to escape you’ll be rewarded with a key, which is this game’s equivalent to challenges. Completing the levels in a certain way will grant you a new key, unlocking new levels. Whether you decide to tackle the same level over and over again or move onto new levels to get new keys is up to you, but tackling the different challenges will be where the longevity comes from. In that respect it reminded me of the most recent Hitman game where trying to complete the level in many different ways was a lot of fun. 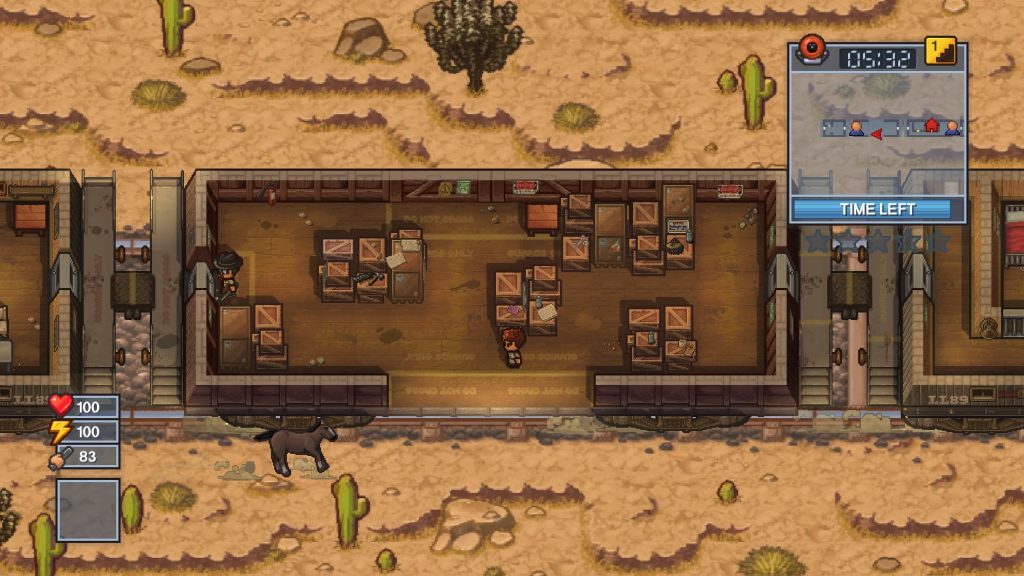 There are three slightly different levels in The Escapists 2 where you’re being transported somewhere, rather than being in prison. These levels give you a limited time to escape and are much more stealth oriented as you need to get the equipment you need from desks littered around without the guards seeing you, there’s no routine or other inmates to worry about. These were very enjoyable and much more puzzle-like and considering the main levels can be played for hours without making any progress these short, tight, focused levels were a breath of fresh air.

Also new to the sequel is the inclusion of up to four player multiplayer. Local and online are available, as well as co-op and versus. Co-op has you working together to escape as you’d expect, with certain areas being only accessible with a partner. Versus is slightly different in that you have a time limit, no routine to follow and the first to get out wins. The co-operative mode allows you to start a game and people can just drop in and out as they please, which is a nice touch though a combined effort is probably best.

The final improvement is the most obvious, the visuals have had an upgrade from the purposefully old school ones used previously. There’s at least a two generation improvement here and it’s very pleasing on the eye. In fact the presentation on the whole can’t be knocked, with customisable characters, great graphics, music and a charm to all the characters as they go about their business. 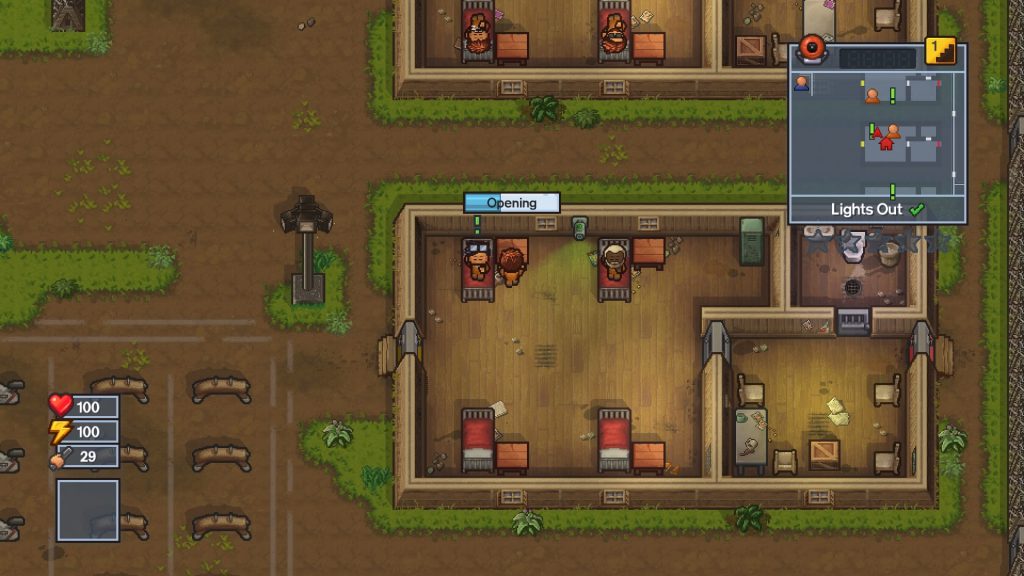 The Escapists 2 won’t be for everyone however. The trial and error nature of the gameplay will frustrate many as they lose their tools for the umpteenth time during a failed break for freedom, some will complete levels but not be interested in going back to try and find another method of escape. Those that do will get hooked, trying to best their escape times and jumping online to help, or hinder others.

So which camp do you fall into? I’m part way between the last two. I’ve completed the first level in a couple of ways, beaten others once, still struggling to get out at all on the rest. There’s no doubt that there’s a certain joy to mastering a level to the point where you can mess with the systems and get out in multiple different ways, but the game can be very challenging so it’s so tempting just to go for the path of least resistance every time. If this sounds like your type of challenge then this is a quality sequel, for others it could end up being a life sentence.

The Escapists 2
8 Overall
Pros
+ Great presentation
+ Many ways to escape
+ Plenty of prisons to try out, the transport ones being extra fun
Cons
- Trial and error gameplay
- Tutorial could be a little more in depth
- Can play for hours without making progress
Summary
The Escapists 2 offers you the chance to try your hand at escaping prison. Turns out that's not as easy as it sounds, with lots of trial and error and failed attempts guaranteed. If you can get in the right mindset however you'll have plenty of fun figuring out multiple ways to break out of the ten levels, both in single player and multiplayer. A great sequel.