ECHO is an enticing prospect, a sci-fi stealth game where you are pitted against an adaptive AI which learns from your actions.  Coming from developers Ultra Ultra who are made up from ex IO Interactive staff there are clear influences from the stealth action of the Hitman games.  I like a bit of sci-fi and ECHO is a game which looks right up my street.

Playing as a third person action game you take control of the character En voiced, rather excellently, by Rose Leslie. En wakes up after a century in stasis where she has been recuperating from a near fatal wound.  Deep in space En is on a mission to revive her partner who now appears to reside in a red tinged cube she carries with her everywhere. In order to do this she makes her way to a planet totally covered in black obelisk like structures. Inside the structures have been kitted out to look like a palace, think Versailles, and are initially eerily empty. 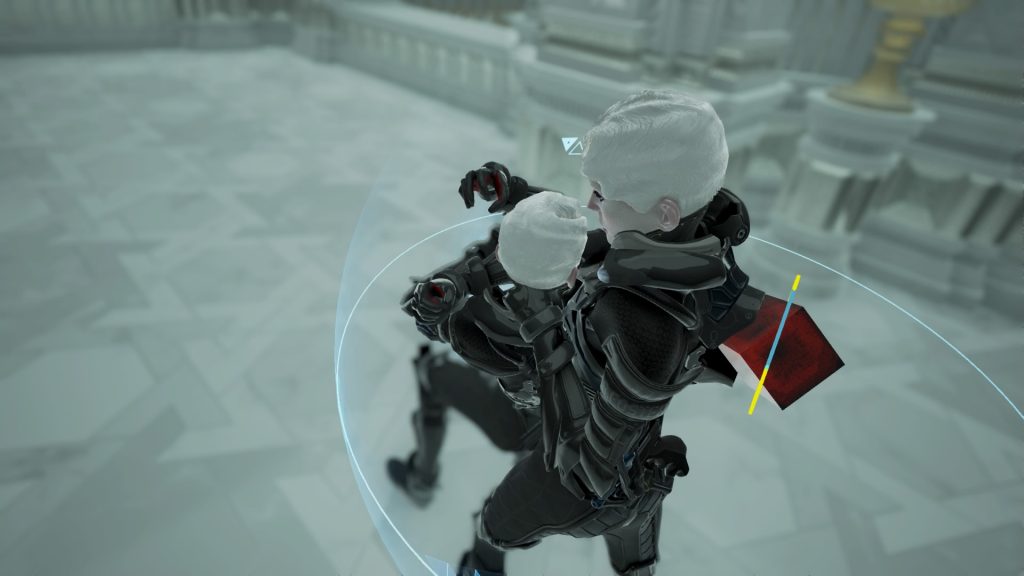 I’ve talked about the plot first because this really gripped me and also there is rather a lot of it.  From starting it will take somewhere around an hour before you get to the meat of the game. A lot of this early time is spent just walking and talking, with plot exposition being centre stage. As an opening to the game it is hugely dramatic and informative although completely at odds with the way ECHO has been promoted as an action stealth game.  This slow start will invariably put some people off.

The main action in ECHO is effectively a stealth game, you’ll be watching the enemies patterns planning routes past them and navigating across rooms unseen to progress to the next area. You can also use deadly force and shoot and throttle enemies to get past them.  In many ways the footprint of Hitman is evident here in the way stealth is implemented which is a good thing.  En has a spherical shield round here which acts as a radar and a warning system.  Enemies are represented as shapes on this shield and change colour as they are either investigating or hunting you down.  It is an elegant system which manages to convey a lot of information in a very simple way. 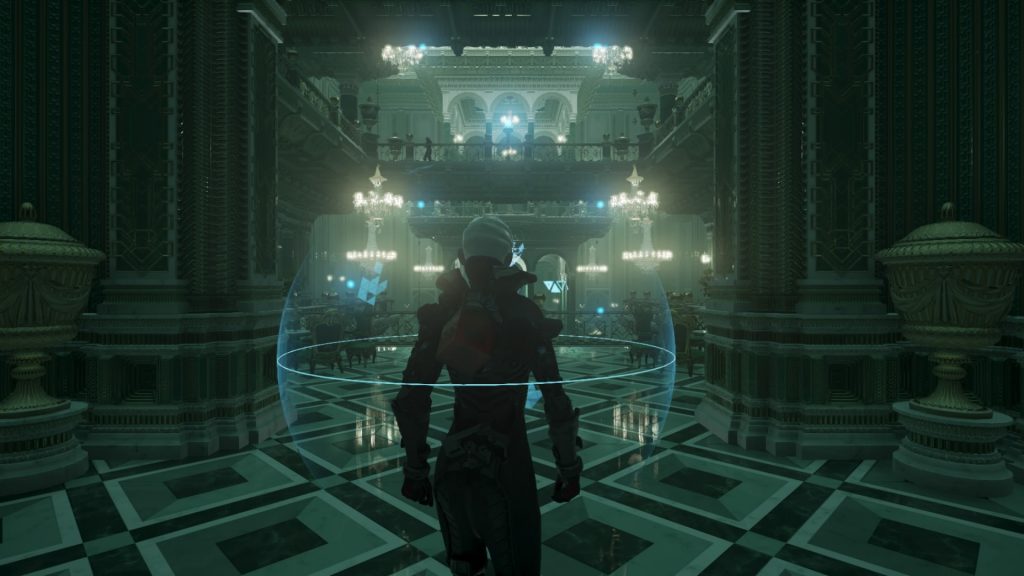 The enemies you face though aren’t just your standard baddies, and this is where the unique hook for the game comes from, as you are facing off against your own actions. An echo is when sound gets reflected back on to you and in that way ECHO is aptly named as it reflects your own actions back at you, effectively pitting you against yourself. Each zone will be populated with a number of characters who look identical to En yet seem to walk about the place on set patrol routes and appear almost robotic, although they are more than capable of killing you.

During this phase you are free to do whatever you want, leap over ledges crawl behind walls run or even shoot your gun. However after a couple of minutes the lights will cycle off and then back on and the enemies will be resurrected and have learnt from your previous actions. Brilliantly during the dark phase the enemies won’t learn your actions so you are free to run and gun to your hearts content without fear of repercussion. This cycle of learning continues and every couple of minutes the lights will go off and the enemy behaviours will change to reflect your previous actions, forgetting their knowledge from the previous phase and learning based on what you’ve just done. 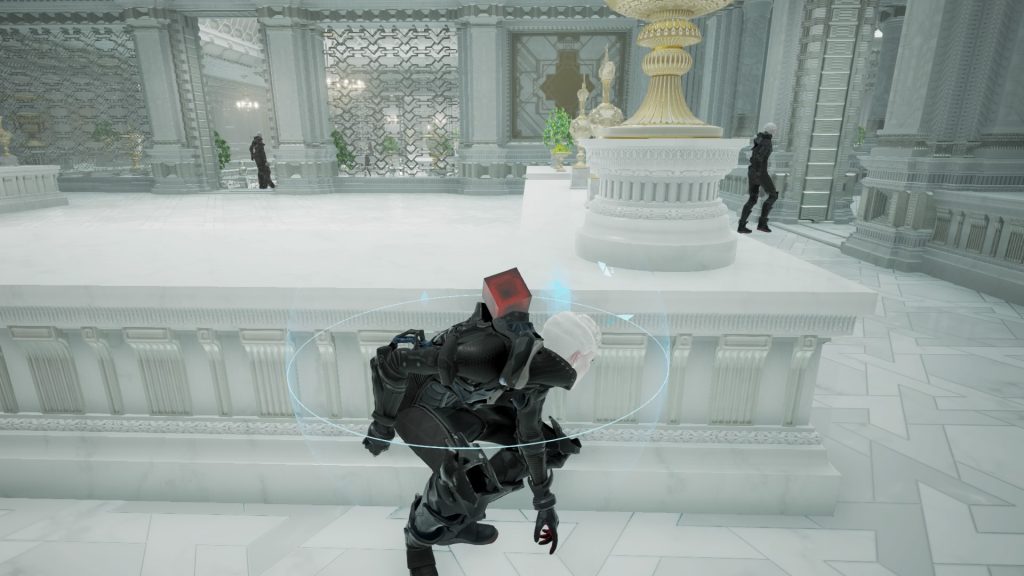 What this means in practice then is that if you have been running around opening doors and leaping ledges all of a sudden you’ll find the enemies are as mobile as you were. No longer will you be able to jump over a ledge to avoid them as they will come barrelling right after you. This is a fantastic mechanic and something I’d never seen before. It works on a number of levels and means that you always need to be on your guard to what you are actually doing, as the more you do the more deadly the enemies become.

It took a while before the rhythm of ECHO fully clicked with me.  The way levels alternate between bursts of action when the lights go out through to the methodical stalking when the lights are up is great, and the musical score when the lights are about to cycle really got my heart rate racing. Although the basic gameplay remains that of hide and seek, there are two kinds of levels on offer. The first sees you collecting a number of orbs to unlock the exit while the other sees you collecting a key to open a door instead. Whilst both are effectively pretty similar to play they do help to add variety to a game which is pretty much a one trick pony. 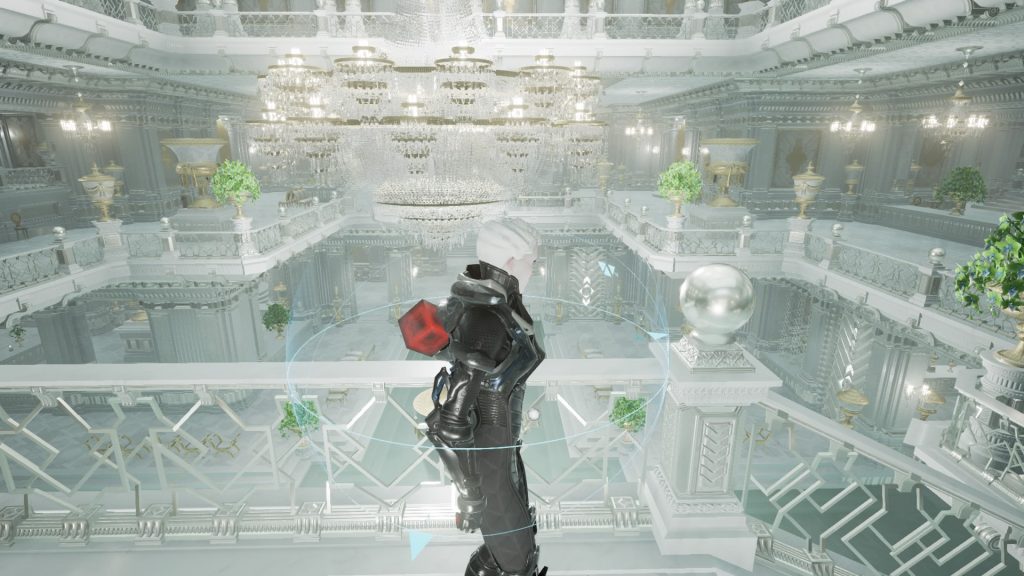 ECHO is split between six chapters which themselves can last anything up to a couple of hours, and each chapter will have various stages to it. However each location is set within the same Versailles like palace and although the various stages do work to offer some kind of variety through colour scheme and decoration, they do all end up looking a little samey.

ECHO is a game with a compelling central idea, a top notch sci-fi plot and some excellent stealth mechanics.  If you don’t buy into the plot then you may be left wondering about the plodding introduction and chunks of exposition which happen throughout the game. ECHO is also a game which demands you understand its rules and play it at the pace it dictates, once the flow of the game clicks you’ll experience some fantastically tense moments.

ECHO
8 Overall
Pros
+ Excellent adaptive AI concept.
+ Great stealth mechanic.
+ Good sci-fi story.
+ Great style.
Cons
- The environments get a little repetitive.
- The large chunks of story will turn some people off.
Summary
ECHO is a game with a compelling central idea, a top notch sci-fi plot and some excellent stealth mechanics. It also demands you understand its rules and play it at the pace it dictates. If you can either get on with, or get past, the plot you’ll experience some fantastic gameplay moments.