As the fifth iteration of an arcade shoot ’em up series that dates back to 1990, Raiden V comes with something of a solid reputation to live up to.  The first four proper Raiden games (there are spin-offs) all started life in as coin-ops but the fifth was an Xbox One release last year and had a pretty good reception.  The PS4 version arrives over a year and half later in expanded form, adding two new levels and, more interestingly, two-player local co-op.

Raiden V is a vertically scrolling shoot ’em up and is relatively traditional for the most part.  You’re at the bottom of the screen shooting upwards and avoiding enemies and bullets that are usually on a direct path towards you.  Nothing special there but the game does have some interesting quirks to it that make it feel a little more involved than the usual shoot ’em up.

The main mode is Story Mode.  Here you select a ship from a choice of three (the fast one, the powerful one and the mixed one) and then select one of three variants for each of your weapon systems.  Then, after the plot is explained to you (I recommend skipping it like I wished I had after it mentioned the Fourth Air Force, 8th Infantry Regiment, 3rd Infantry Division, 18th Mechanized Battalion and the 2nd and 4th Armoured Divisions all in the first paragraph of text), you get thrown into the action. 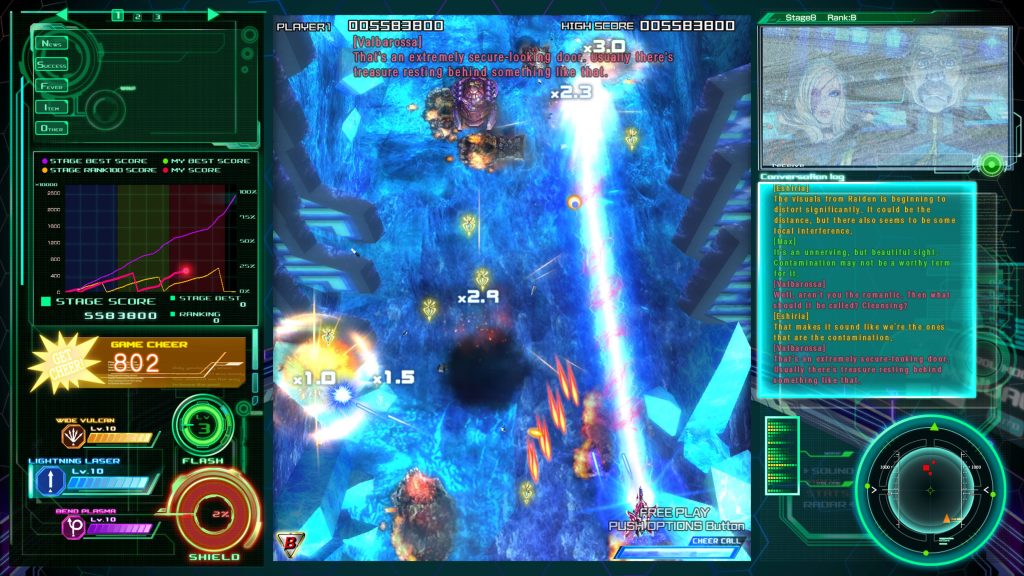 Once you get past all that, it’s pretty much business as usual.  The controls feel solid as you weave around the screen, shooting down the enemies coming your way.  The X button controls your main weapon (a basic bullet spray and your current choice of major weapon) and B fires off a bomb from your initial stock of three and, on a basic level, you’ll not see too many surprises as you fight through the first level and take on its boss.

What’s good is that this isn’t really a bullet-hell game.  Sure, there are times where there are lots of bullets (see above) and it feels hellish but most of the time this is a bit more standard.  Certainly there aren’t too many times where you’ll be inching your way through a sea of firepower, although the occasional boss battle can get ridiculous with the amount of hostile pixels being flung your way.

As the game is a vertical shooter, that means that pretty much half of the screen is used to just frame the action.  On the right hand side you’ll see a pointless mini-radar and, more noticeably, a video feed of two people (Max and Eshiria) who are having a conversation LITERALLY ALL THE TIME.  An extra panel on the right also shows a transcription of their chat which is fine but your eyes won’t be able to go anywhere near that.  The conversation is voice acted but is somewhat lost under the sound effects of the game and the extremely bombastic music which sounds like the band Dragon Force getting into a fight with an orchestra.  The quality of the sound in terms of voice, effects and music is all very good but it is a tad insistent. 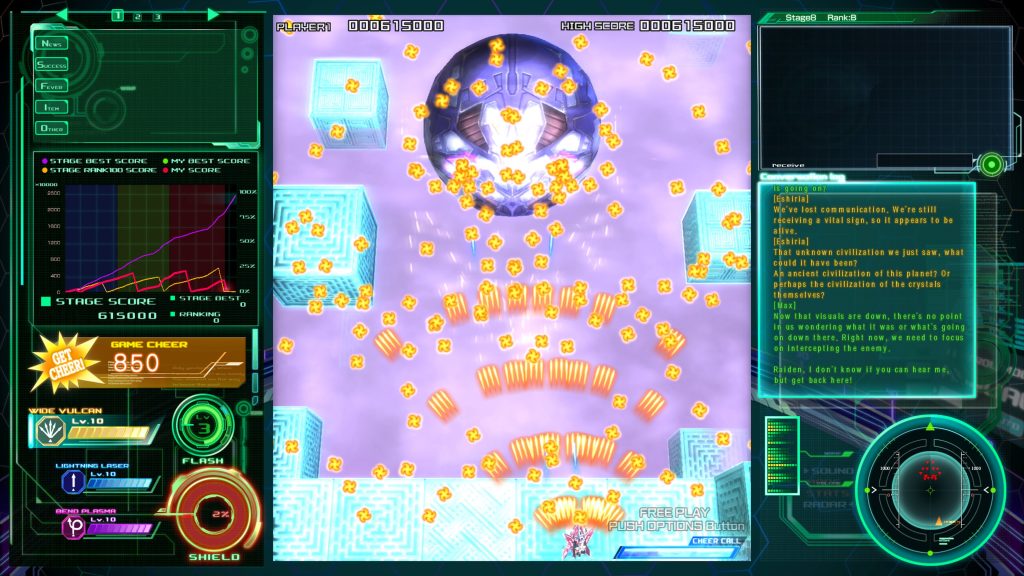 On the left of the screen the information is quite interesting.  At the bottom you’ll see the current status of your weapon upgrades, your flash level (which I think has something to do with your score multiplier) and your shield.  You only have one life but you can take a few hits depending on your ship and which of the five difficulty levels you’ve selected.

Also on the left are two panels that have a connection to other players online.  One is a chart that shows your score against the best player in the world and the average for that stage.  It tracks in real time and is quite a cool feature, even if it is a little disheartening when it looks the heart rate of an old man passing away in his sleep against Dawn French’s during a marathon.  Above that is a small screen that mentions in-game achievements.  These pop up and if you press the triangle button you’ll ‘cheer’ it.

If someone cheers you, you can save up those cheers and use them to activate a power up where extra ships join you for a short time.  It’s a nice feature but I didn’t feel much connection to other people as I was just slamming the triangle button without looking what I was cheering. 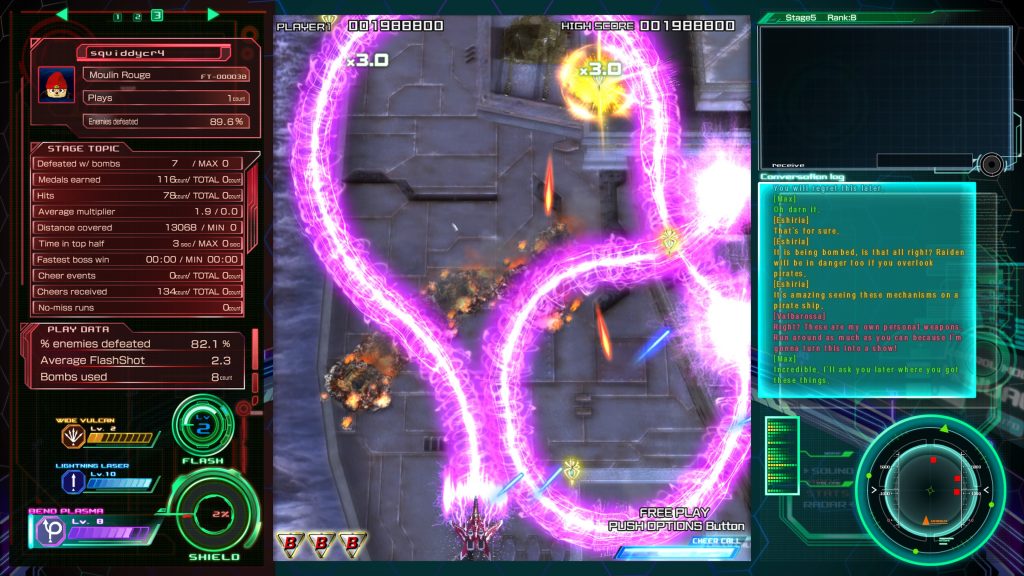 The most noticable element of the game is the sheer amount of firepower your little ship puts out.  At any given time you’ll be using one of three weapon systems.  Vulcan is your basic spread bullet weapon, Laser is more focused damage to a smaller area and Plasma is just a mad sweeping purple ray of doom that seems to target the entire screen all at once, albeit at a slight cost to damage.  The occasional pick up allows you to upgrade one of those weapons (up to ten levels) but will force you to switch.  So if your Laser is fully powered up but you switch to an underpowered Vulcan, there’s nothing you can do until you find another pick up.

Once you get into the game, there are a few issues.  If you’ve ever played a shoot ’em up by Cave, you’ll have seen a masterclass in how to make bullets stand out from detailed backgrounds but here there were plenty of times where death came seemingly from nowhere.  This is a problem almost right away as the game’s first stage is shrouded in fog but some later levels are a bit clearer.  Also, at times later on death just comes from nowhere because of super speedy bullets that you can’t really do too much about.   The game does look quite nice (we’ve seen better but we’ve seen a lot worse) but this can be a real problem.

As with other shoot ’em ups, you’ll need to memorise some parts of the game but Raiden V isn’t as brief as other games in this genre and so that’s quite a lot to remember if you’re going for a 1CC run.  This version does add two levels, which is nice, but it probably is a little too long for casual play (although the game does let you continue when restarting after turning the game off during a playthrough, although it’ll disable putting your score on the leaderboard). 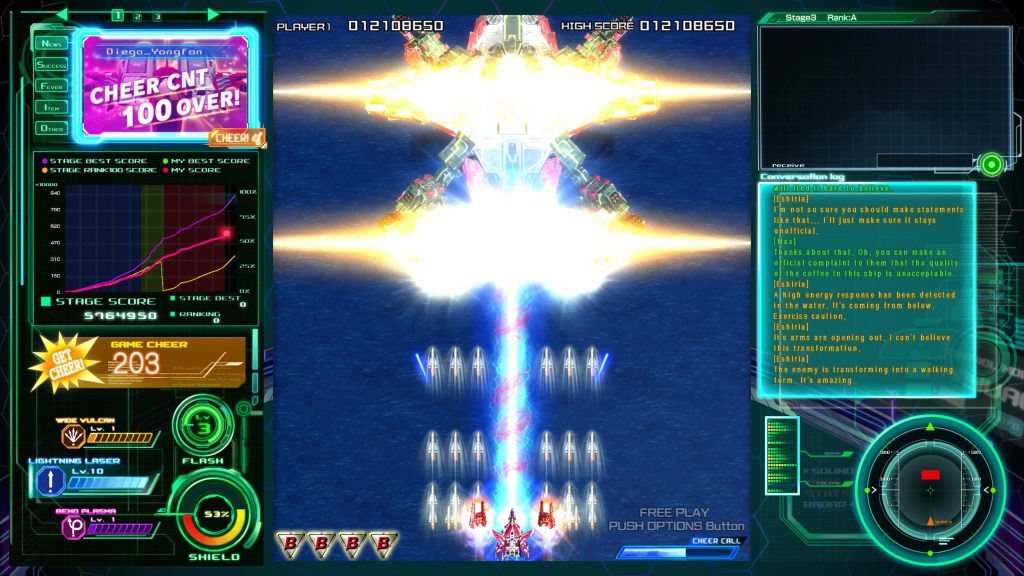 At $35, this is somewhere in the middle range price wise, and so you probably need all these levels (eight stages with branching routes) for value, especially as the game is lacking in variety (as you’d expect from a shoot ’em up).  The game does add a Boss Mission mode where you take on various bosses with conditions on your load out, bombs and cheer.  These are nice because they are quite bite-sized challenges.

Ultimately though, the best players will be competing for high scores and 1CC runs on Story Mode and this game will cater to them but also to more human players thanks to its infinite continues.  If you’re a fan of the genre, this game offers you some high quality shooting action and there are plenty of reasons to like the game.  Minor problems, which have been around since the Xbox One version debuted last year, do spoil the party a little though.

Raiden V: Director's Cut
7 Overall
Pros
+ Good controls
+ Vibrant visuals
+ Solid shoot 'em up action
+ Has some innovative ideas
+ Adds co-op play and new levels
Cons
- Cheap deaths spoil the fun
- Voice acting can be distracting
- Uneven difficulty
- A tad too long for a shoot 'em up
Summary
Raiden V is a very accomplished shoot 'em up that offers a suitable challenge to players of different skill levels but the visuals can obscure the action and death can come very cheaply.