Chaos;Child is a new entry in the Science Adventure series of visual novels that fans of the genre may have experienced through the Steins;Gate games. It is actually a direct sequel to Chaos;Head but that has never been released outside of Japan. The events of that game are referenced but I was able to pick up and follow the story with little trouble. 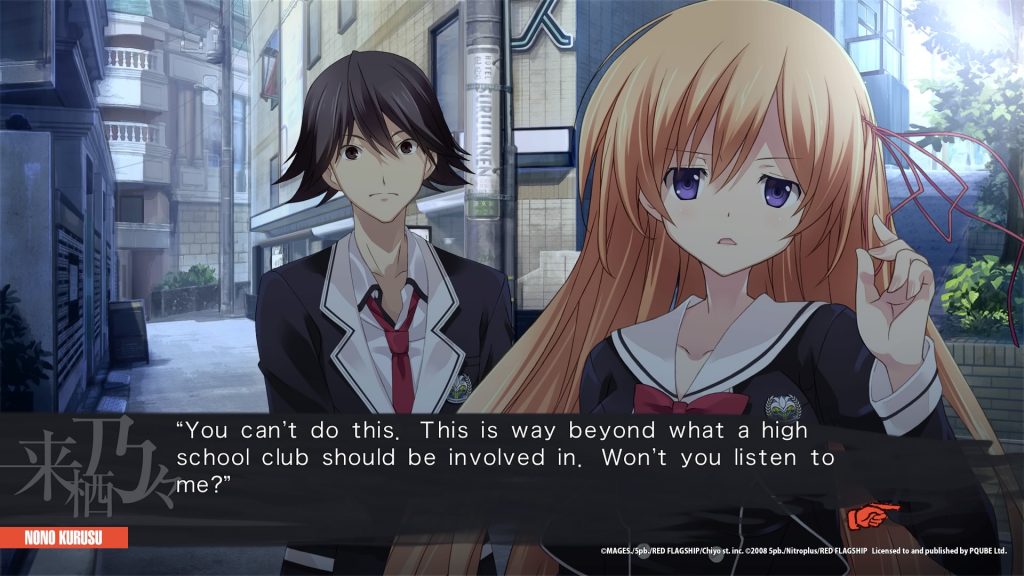 Being a visual novel, although there are a couple of interactions you can do, the story is everything. The main character is Takuru Miyahiro who shares a similar arrogance to Steins;Gate protagonist Rintaro Okabe. He believes himself to be a right-sider, someone with knowledge beyond most people, the wrong-siders. In actuality he is a social loser who struggles to talk to anyone he doesn’t already know and collects magazines that give dating advice. Honestly, my initial reaction to his introduction was not great, he is not painted as a pleasant person.

Thankfully through his interactions with his friends at the school Newspaper Club he quickly becomes rather likeable, which since you spend the majority of the game in his company is a good thing. Being something of an internet journalist he takes an interest in murders that start occurring on the same dates as the New Generation murders, the murders from Chaos;Head. The murders are also similarly bizarre and the reading won’t be for the faint of heart as the intro is dark and gruesome and the game continues from there. The illustrations don’t go into too much detail but the imagery along with the descriptions and audio combine to paint a nasty picture. 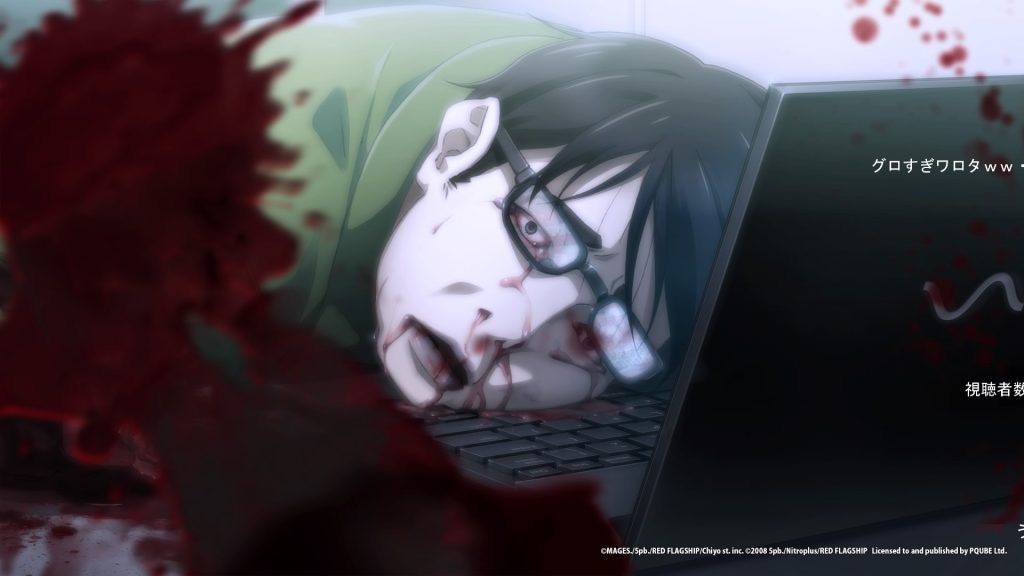 It’s a strong opening which is then followed by some quite poor pacing, which the majority of visual novels suffer from I find. The gruesome murders and important story points are separated by large sections of school life and anime shenanigans which do build the characters but stretch out the chapters and slow the pace of the story to a crawl at times. Once you do get a decent way in though the story does get its hooks into you as new discoveries and concepts are introduced but bear in mind that this game is around 70 hours to see it all so ‘a decent way in’ is a large chunk of time.

You will mainly just be clicking through text but as mentioned earlier there are a couple of points of interaction. One is your evidence board which tracks important information about the murders. At points the game will task you with putting the correct pieces of evidence together, but really it’s just an illusion as if you get it wrong then the game tells you and makes you do it again. The other is more important and actually controls the multiple endings you can see. 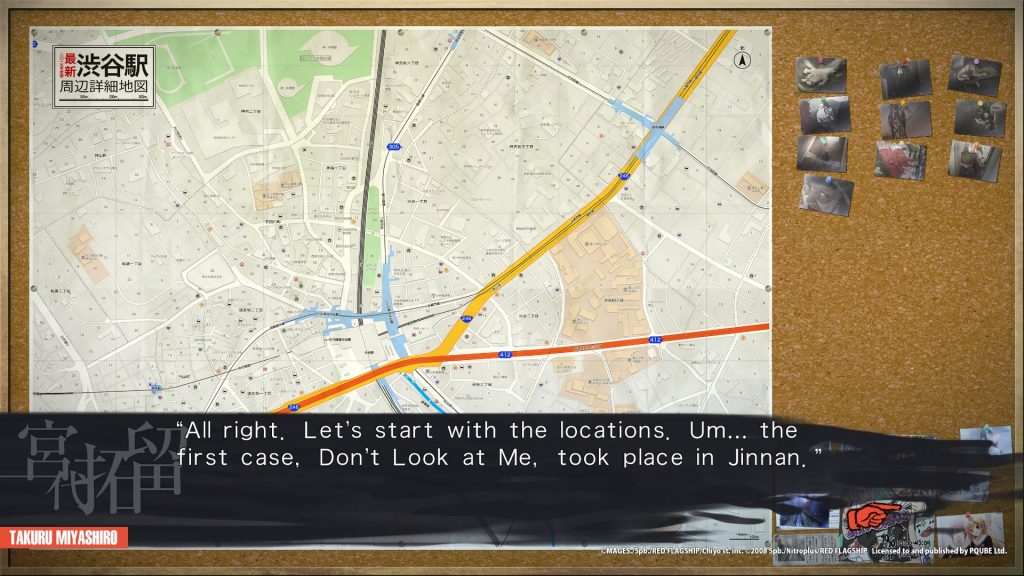 Regularly in the story a Delusion Trigger will appear, where Takuru will be able to have a positive or negative delusion, or no delusion at all. These are basically like the cut aways in Scrubs or Family Guy in that they don’t actually happen and are just in Takuru’s head. These can vary and you won’t know what you’re going to get until you choose it, which may end up with a positive, sexy moment or might have a negative, paranoid moment. Now unlike say a Telltale game where you have a binary choice it is going to be difficult to know how these choices will effect the story. Basically you are controlling how Takuru feels about certain people, positive or negative, and that’s how the story will branch later.

The voice acting is all Japanese but is good from what I can tell, as I have already pointed out the audio work is very good with incidental sounds playing in the scenes that need them and the music being catchy or foreboding as the moment warrants. The art work is all good quality but is probably a step back from Steins;Gate due to the generic anime style. Character portraits have more poses than is the norm for this type of game and the faces animate really well. Important scenes get their own illustrations which again are very well drawn.

There are quite a few translation errors however, with plenty of typos meaning that spaces are missing, words are absent or the wrong word is used in place of a similar word, like an auto-correct error. If it only happened once or twice I wouldn’t mention it but it is a fairly frequent occurrence unfortunately. Not game ruining but it stops the flow when you have to double check what you’ve just read. 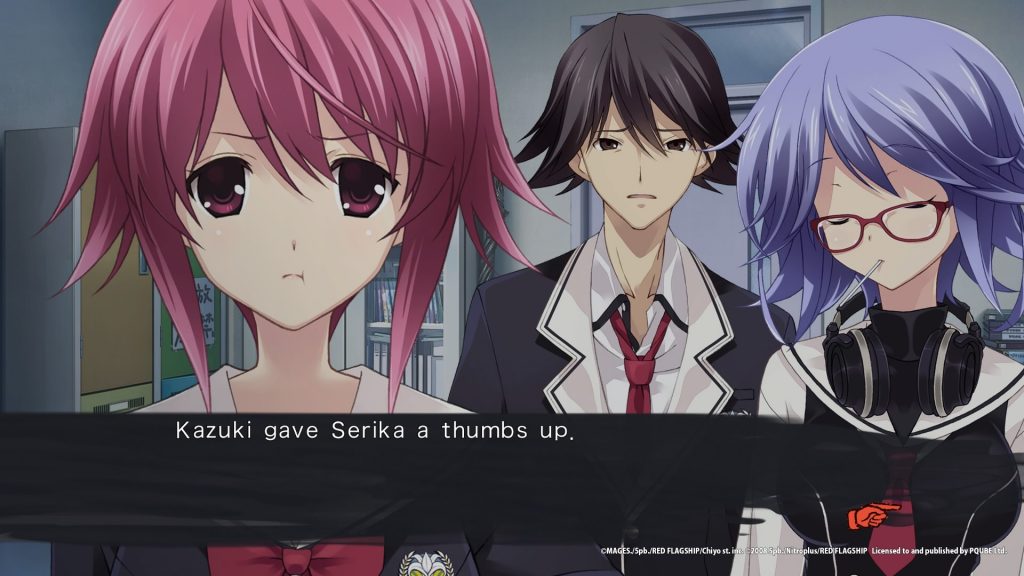 For fans of visual novels this is another solid one if you liked Steins;Gate. I prefer my visual novels to have a little more interaction personally and to have tighter pacing but that doesn’t take away from the interesting story concept and great presentation. You need a lot of time to get the most out of it but fans of the genre know what they’re getting into and will relish it.

Chaos;Child
7 Overall
Pros
+ A dark and interesting story
+ Delusion Trigger throws up some unexpected scenes
+ Great presentation across the board
Cons
- Some poor pacing
- Translation issues
Summary
Fans of the visual novel genre should definitely check out Chaos;Child. There are some pacing issues but the dark tale will eventually take hold of you, helped by its strong presentation and unexpected concepts.