Developed by Aist, DreamBreak seems to offer players a Flashback style adventure, with retro graphics, a dystopian future and conspiracy. What you actually get is an interesting but very flawed mishmash. 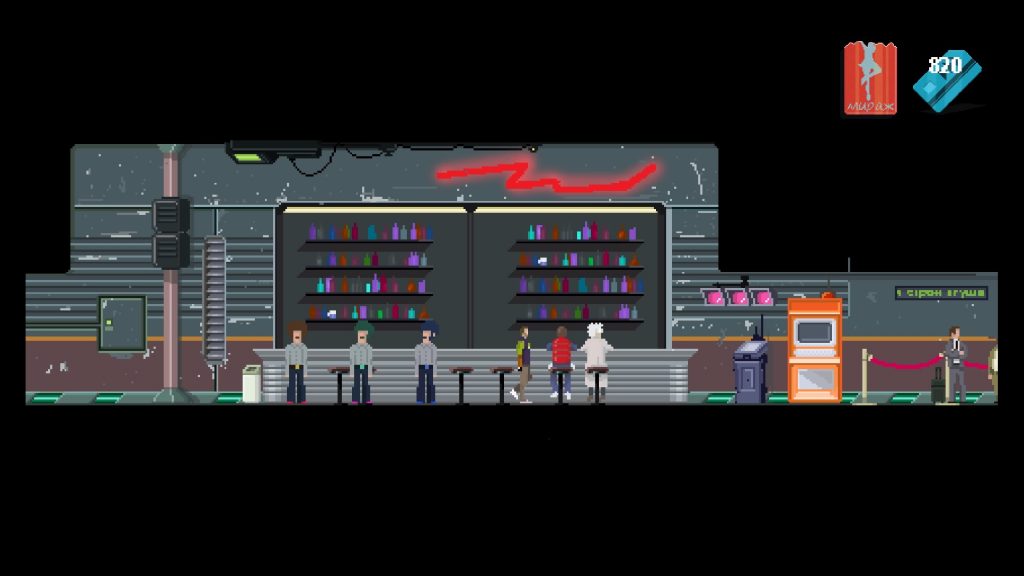 You play as Eugene, a janitor who is dragged into a revolution against his will. This leads him through sewers and factories in Russia where a shadowy figure on monitors around the country delivers constant speeches to the populace. At least, that’s what I think it’s about. Bar some short story scenes that you have to press X to progress through the majority of dialogue (written only, there’s no speech) simply floats above people’s head as you walk past. Combine that with a poor translation, I assume by accident although it sometimes felt like it was possibly supposed to sound like a Russian speaking English, and you’re going to struggle to follow exactly what’s happening. Not that it matters too much, I don’t think there’s a whole lot to it anyway, but it is worth pointing out.

You work your way through this story by directly controlling Eugene, walking/running left and right with some minor platforming which is where the comparisons to Flashback come in. Eugene’s movement is very deliberate, with each footstep animating fully and jumps requiring you to be lined up with the ledge you’re trying to reach up to or horizontal jumps moving the same distance every time, there is no air control or anything like that. You can interact with anything that’s orange which actually works very well, with items standing out but not looking out of place. Your gameplay loop basically boils down to moving across the screen, avoiding obstacles and if there’s something orange to interact with, do so before moving on to the next screen. 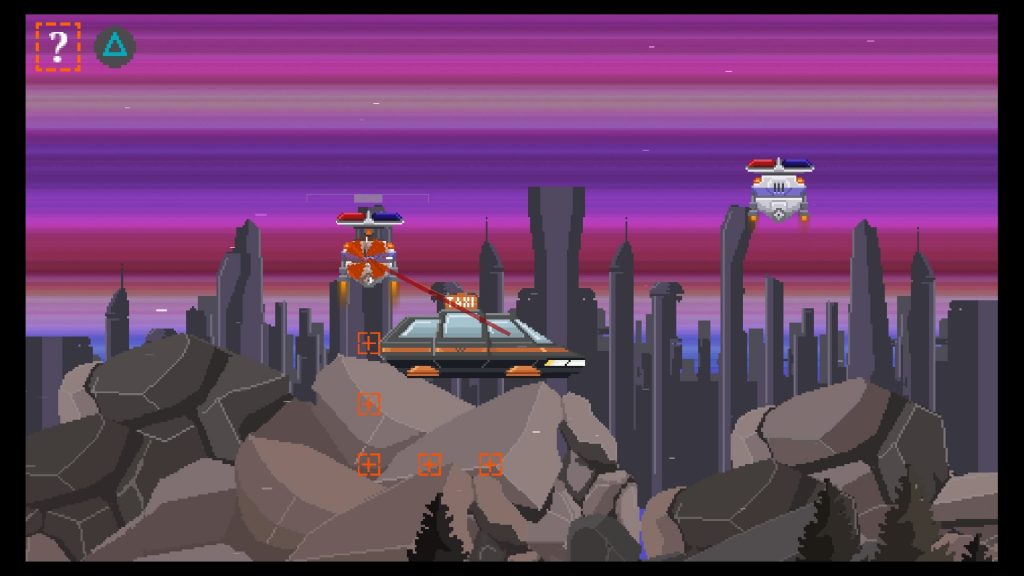 The visual design is very good. As you can probably tell from the images the pixel art is nice, the orange items work and bar a few areas where I wasn’t sure what was a foreground item blocking my path and what was in the background you can generally grasp where to go on a screen. Animation-wise things are less good, at least when compared to their inspiration. It’s fine, but Flashback still has a unique look and DreamBreak doesn’t quite make it. The movements are reminiscent of those old rotoscoped images but aren’t of the same quality.

The music on the other hand is very good, with a decent number of tunes with an obvious loop but I’d still point it out as a highlight. You can collect records throughout your adventure which allows you to access them from a menu (and there’s a trophy for it) so the devs are obviously proud of them and they should be, they fit the mood well and suit the aesthetic.

You can pick up items as you play to use to progress which has seen comparisons drawn to point and clicks but really it’s just an extra step to take before finishing a room. Sometimes you’ll need to find power to use a lift, sometimes you’ll need a tool to activate the power but it’s generally all in the same room or very nearby, requiring little backtracking or any real puzzle solving skills. The only exception is a Pipe Mania style puzzle which pops up multiple times throughout the game where you must rotate different shapes and sections of pipe in order to create a flow of water or electricity. There is very little feedback with these puzzles but, apart from one, you can happily mess about until you get the correct solution by judgement or luck. 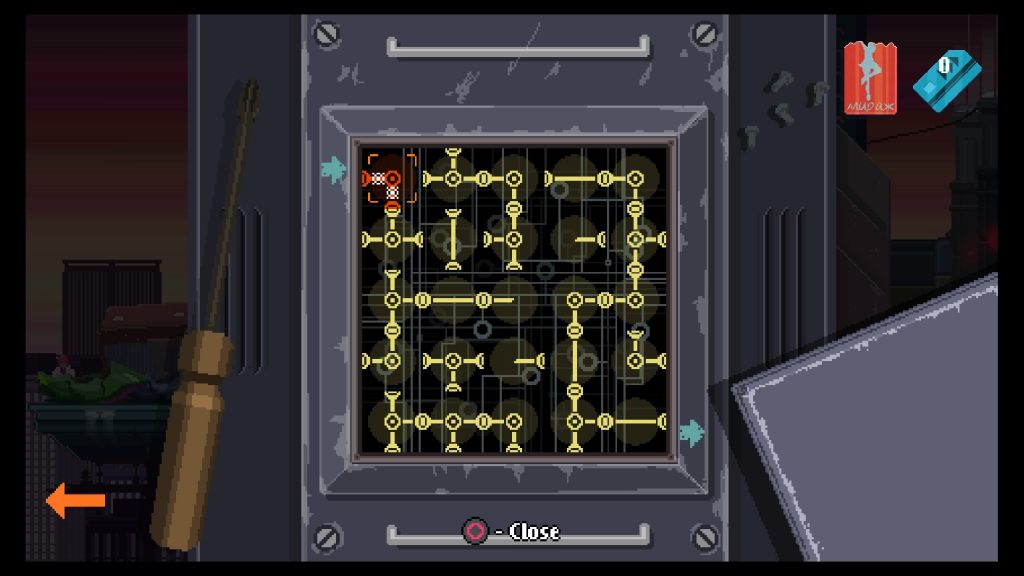 That is not the only different gameplay element in DreamBreak, in fact the game is full of them. There’s an optional arcade cowboy game where you can shoot or deploy a shield, which also teaches you how to do that when it occurs later in the game but, bar a trophy, has no other relevance. There’s a betting game which is required for story progression but simply involves choosing one of three animals with rockets strapped to their backs, the first across the line wins. Then there are the more involved ones which, I’ll be honest, are terrible.

Early on you’re escaping by taxi and are able to hack into the pursuing cars to disable them before they destroy you. To do this an orb rotates around your car, once it makes contact with another car a line of symbols appears and you must follow it using the dpad, so for example if you line goes down three times and then right two then that’s what you press. Do it before the enemy’s bar fills up and they die and you don’t. It’s sort of okay but then goes on far too long, if you fail you go back to the start of the section. Another is basically Space Invaders. Drones are coming down the screen at you and you have to move your auto-firing tank left and right to wipe them out. Again, this goes on too long, with multiple waves.

The gameplay design in general is a little off. Even the basic movement of your character is poor, not in a Flashback way, but more because every time you stop moving Eugene has to face the screen so you’ve got to wait for him to rotate to look out at you, before rotating back to move left/right. It’s so infuriating and just feels like your controller is cutting out every now and then. 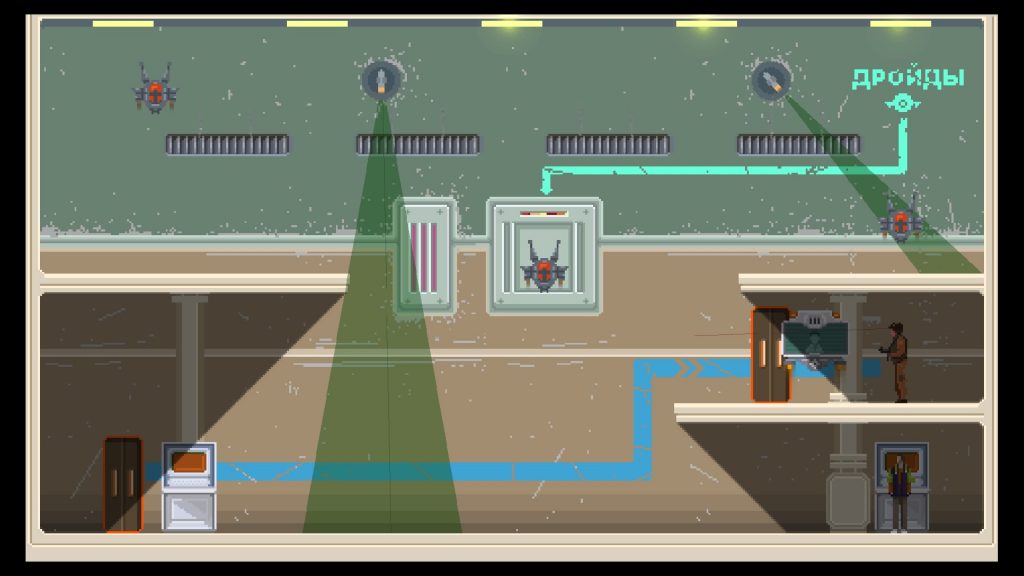 The other thing, which due to the game’s issues I didn’t mind too much, is that you can complete it, multiple endings an’ all (you can continue from the turning point), in about ninety minutes. Which actually works in its favour. If you’ve got a great game then that would be so disappointing, but with a flawed game it means those flaws don’t have time to truly annoy. The price is quite low, the same as the similar in length but much more replayable Bleed, but despite ultimately feeling my time with DreamBreak was just about a positive one it’s very difficult to recommend.

DreamBreak
5 Overall
Pros
+ Visuals are nice, in a retro-pixel way
+ Great music
+ Plenty of variety
Cons
- Controls are poor
- Most of the mini-games aren't fun
- Story is very light with translation issues
Summary
DreamBreak manages to remain enjoyable for its short running time, just about. The pixel art visuals are well done and the music is great, but the controls and multiple gameplay elements are flawed making it hard to recommend.