Arguably the highest profile release at the start of this new generation is Demon’s Souls. How it’s come to this I don’t know, a remake of game that at one point wasn’t even going to be released in the West has come to spearhead the exclusive line up at a new console launch. It makes more sense if you think about how popular the Souls series has become since and the fact that Bluepoint Games are the ones remaking it, as they’ve done before with other titles, and they have done the best job of showcasing the visual potential of the PS5. 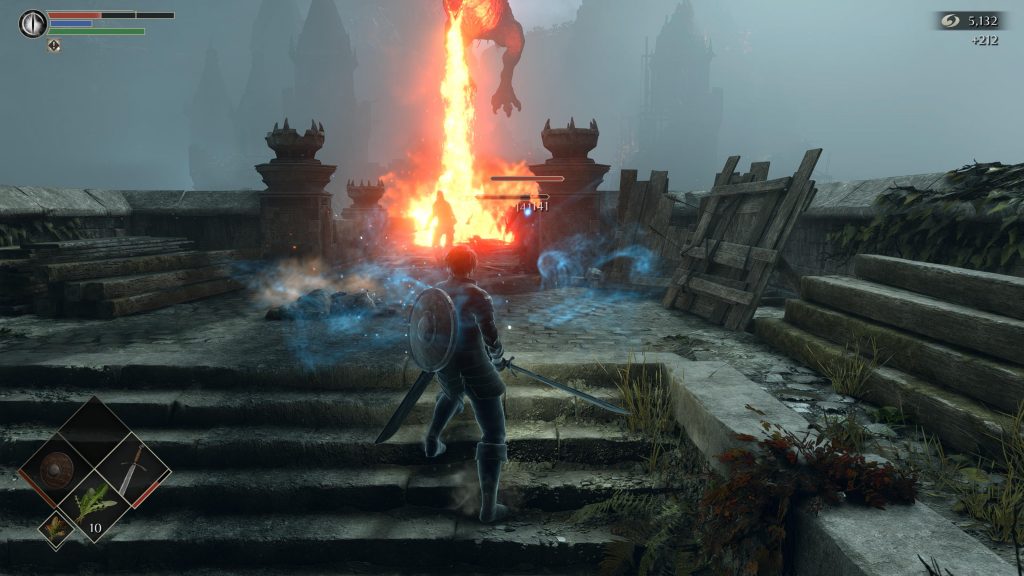 I have a history with Demon’s Souls on the PS3. I imported it at the time, something about it appealed to me but it wasn’t until after I’d played Dark Souls that I really got it. I went on to Platinum it and then when it was given away on PS+ it was a different region with a different trophy list so I platinumed it again. Pure Bladestone is the bane of my existence (deep cut for you).

So here we are with an odd beast really. The first of the Souls games, basically untouched gameplay-wise yet with graphics so advanced it’ll be interesting to see if From Software, who had very little to do with this remake, can match these visuals from a tech perspective in their next game. Being the first of its kind makes it very interesting, they were playing with different ideas and those that work really work and are with the series to this day or are high points across all the games. Those that don’t work can feel confusing and frustrating.

Souls players will be familiar straight away with the gameplay. Demon’s Souls is a difficult action game with strong RPG elements and a focus on exploration. You have a health bar which will chip away as you take hits, but also a stamina bar which dictates your actions. Swinging the huge variety of weapons, dodging, blocking or running will all take stamina. If you run out you won’t be able to act until it refills and will leave you vulnerable so managing this meter is key to success. Enemies can kill you very quickly, so it becomes this dance of avoiding an enemy attack before getting some hits in yourself which, depending on the enemy and your strength, might be enough to kill them. It’s got a unique flow (less so these days) which takes some getting used to, but once you do it’s one of the most rewarding experiences in gaming. 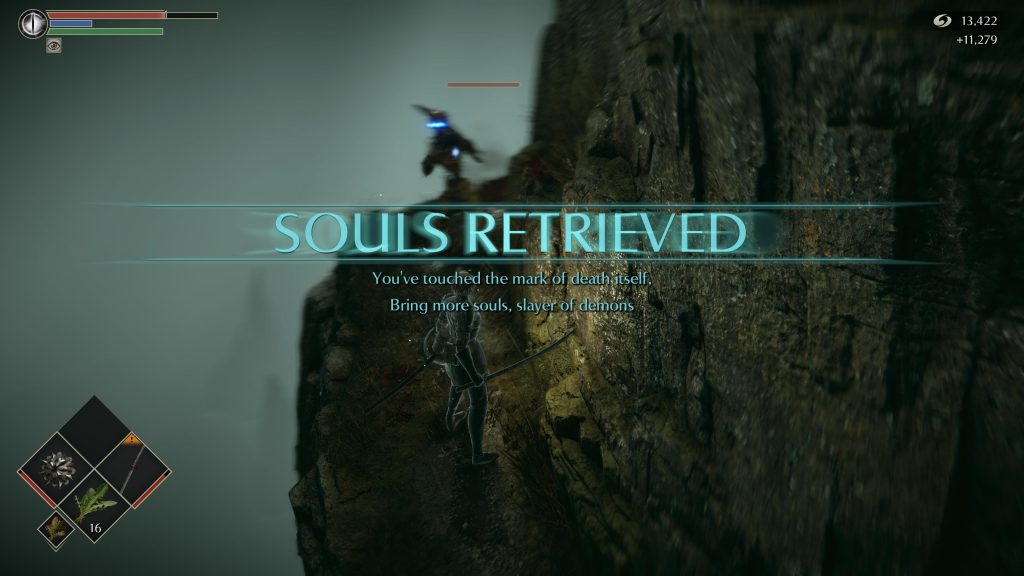 However, you will die. The game starts with a tutorial area to teach you the very basics and one of the basics is death. There is a boss at the end of the tutorial that will most likely kill you, but that’s okay. Once you’re in the game proper you’ll gain souls for each kill you get which will act as your currency and experience for levelling up. If you die you drop these and must return to that location to get them back. If you die trying then they’re gone for good. It sounds harsh but there’s always more souls to be had.

Your first death sends you to the Nexus, a hub area where NPCs gather to sell you goods, store your items, level you up, repair and upgrade your equipment and where you can select where to go next on your quest. Your connection to the Nexus makes you semi-immortal. You may lose your physical body but your spirit form can continue with a penalty to your maximum health and you can gain your body back by defeating a boss demon. Simple really.

There are five worlds to travel to from the Nexus, this isn’t a large interconnected world like in Dark Souls, and each bar the first has three stages you can progress through, the final basically just being a big boss fight (though each stage also ends with a boss fight). As the worlds aren’t interconnected they are more straightforward that in later games, with no checkpoints within each stage. Instead each level will provide a shortcut once you’ve progressed far enough so you do not have to play through the entire level when you die, which is good for attempting the bosses over and over and offers a similar overlapping world experience as later games, but in a simpler form. 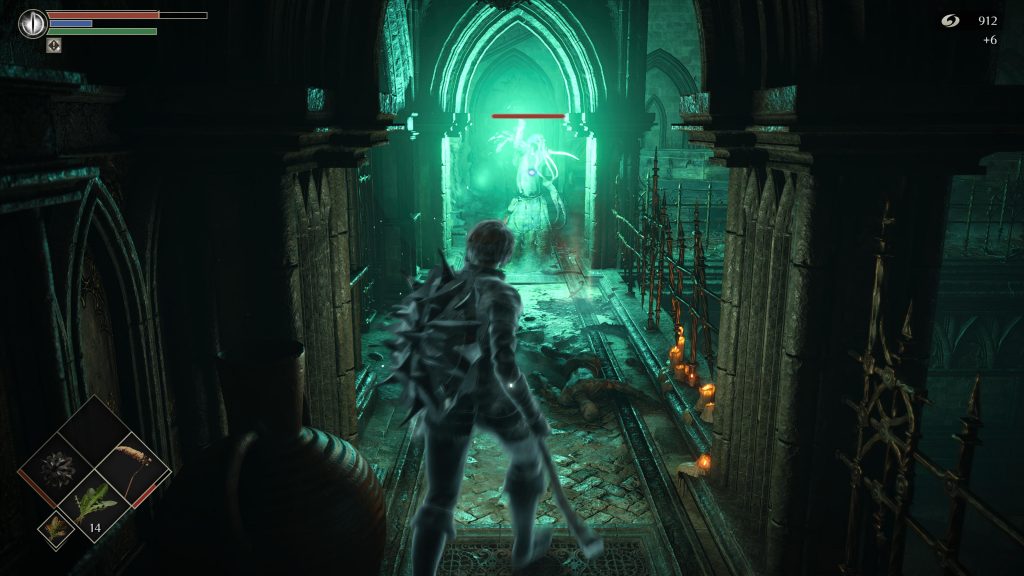 The levels can be tough to get through, with quite challenging combinations of enemies which will take unprepared players a while to figure out and may even feel unfair. The bosses in general are probably easier than later examples, at least for experienced players, but there are a couple of real toughies and a few really interesting ideas like a boss who has a body guard but doesn’t fight themselves or a boss who is controlled by other players.

That’s right, Demon’s Souls has online functionality that reveals itself in a few ways. The most obvious are the notes and bloodstains that are lying around in levels. The bloodstains will show you the last few moments of someone’s life so you can maybe get a clue as to how they died and avoid it. The messages are left by other players to help you (or not) by telling you to look in a certain direction or to be wary of something.

Then there’s the more direct online element. When you’ve got your physical body you can be invaded during a level by another player and you’ll have to defeat them to continue or die trying. An invader will gain their body back if they win and get some souls, but some people just do it for fun. There is the opposite side of the coin however, you can help another player by joining their game to get them through the level and you gain your body back if you help defeat the boss. 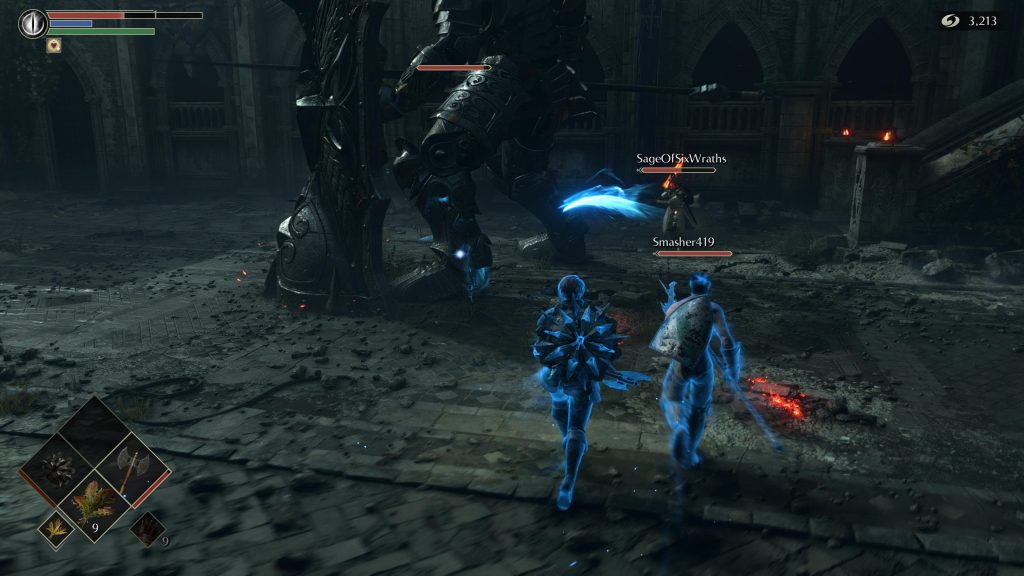 That’s the risk/reward you get for being in body form. You have more health, have higher defence and can summon other players to help you if you choose. However you can be invaded by other players as well. If you don’t have a body then these things aren’t available to you and you have less health. Of course the online portion is optional, you can play offline if you choose but you’ll also be missing out on the messages and bloodstains as well as seeing ghosts of other people playing the game along side you. It’s a major part of the game, but it won’t be for everybody.

All of this was true of the original release as well, but there are some changes for the PS5. Obviously there are the graphics which are stunning and the real reason to jump back in if you’ve played the original. Often I’ll stop and look across the level and it’ll look like a piece of concept art, it’s just so picturesque. You have a Cinematic or Performance mode which offers a higher resolution at 30fps or a smooth 60fps which is how I played. Characters have far more detail (NPCs actually move their lips now!) and the spell effects are fantastic along with the lighting and environmental interaction. Linked to this is the DualSense which uses the haptic feedback, not to the extent that Astro’s Playroom does but it still adds to the immersion and uses the speaker in the controller to great effect. 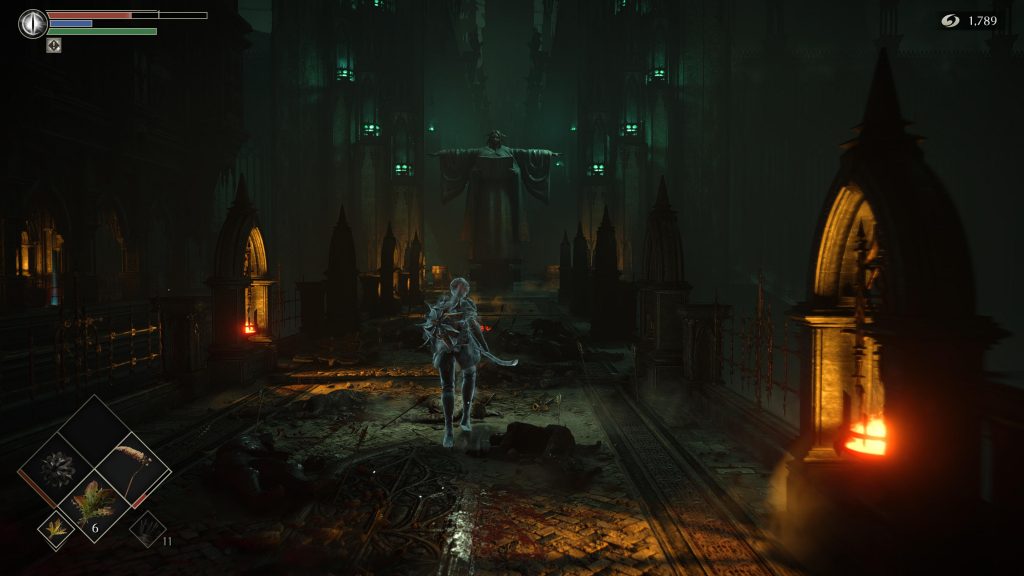 There are some mechanical changes as well. The World Tendency, which is a system too complicated to go into here but basically alters levels and creates new events depending on your actions, now isn’t influenced by being online which gives you more control. It’s still not really explained at all though (luckily the wiki for the old game still applies for anything you are unsure about, of which there will be lots). You can also send stuff to storage from anywhere, which kind of negates the point of an inventory limit but does fix the problem from the original of trying to pick something up, not having the space and possibly losing the item until New Game +. A slight adjustment for that is that grass (your healing items) now weighs more, so you can’t be running around with near enough infinite heals like you could before.

There’s a photo mode (that also acts as a pause, a Souls first) with different filters, poses and expressions. There is also the new Fractured Mode which can be activated at any time and basically mirrors the game to give players a somewhat new experience. Oh, and I’m getting used to it now so I almost forgot, the loading times are incredibly fast. You barely have a moment to think after dying before you’re thrown back into the fray.

There is no real extra content, a few new items here and there, which is probably the correct approach all things considered. The sixth, broken arch stone which was cut from the original release hasn’t been made available. Some of the reaction I’ve seen to the voice acting and music, neither of which are bad, just different to the original shows that if Bluepoint had changed too much it would have been a mistake and preserving it as it was whilst replacing the low quality audio as necessary was the right way to go. 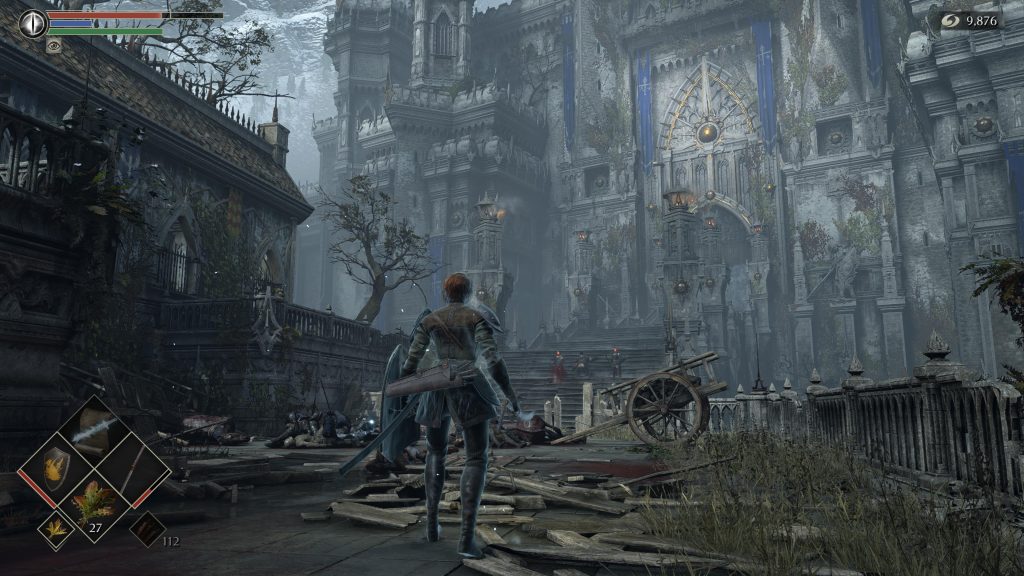 Which brings us to the conclusion. Should you check out Demon’s Souls on PS5? If you’ve played and enjoyed it before and would like some eye candy for your new console then it’s a no brainer, just know that it’s not that different but has an astonishingly lovely coat of paint. Similarly if you’re a fan of Souls games but haven’t played this one then get on it, you need this. If you’ve played a Souls game before and it wasn’t for you then this is still that and it’s up to you if the visuals are enough for you to give it another go. If you’ve never experienced a Souls game then I’d definitely say to give it a go, it’s only the price that’s been inflated for the start of this generation that should make you consider your purchase.

Demon's Souls
9 Overall
Pros
+ Stunning visually
+ Still has some fantastic moments to this day
+ Makes great use of PS5 features
+ Very rewarding gameplay
Cons
- Not all the mechanics are winners
- Pricey
- Nothing drastically new
Summary
Demon's Souls for PS5 is a stunning remake of the game that kick started a new genre. Some of the mechanics have been improved upon since but the experimental nature of it all creates some incredible highs. Of course it goes without saying that it's gorgeous and makes fantastic use of the PS5's unique features as well.