I have to admit to having not played the original Demon Gaze. I have however reviewed multiple Experience Inc. developed RPGs on the Vita (here, here and here if you’re interested) so do have a decent frame of reference. Although in many ways it felt familiar I was surprised by how different Demon Gaze II is from all those other titles. 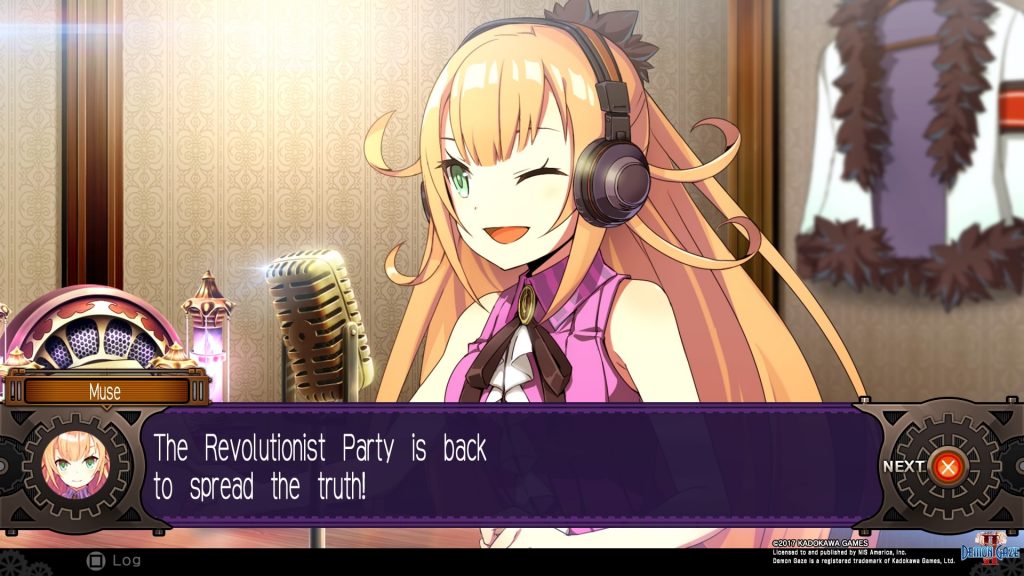 Experience Inc. specialises in dungeon crawling RPGs viewed from a first person perspective. Although Japanese in origin generally they are more open to customisation rather than the linear experience of a traditional JRPG. Demon Gaze II veers back towards a more typical JRPG in that there is far more story and you don’t get to create your own characters in this one. This may disappoint some but there are improvements too.

Anyone who played Stranger of Sword City will know that that game started with a very tough introduction. After creating a character with a complex creation tool you were placed into a deadly tutorial area on the default difficulty. The opening to Demon Gaze II is far more forgiving and the difficulty across the board is more welcoming. After a brief story section you get to choose your character portrait, alignment, a skill and a voice and then you’re put into the game proper.

Your team will slowly build as you progress through the story, rather than creating everyone at once. You are a Demon Gazer, meaning you have an eye that has the ability to bring defeated demons over to your side. This isn’t like Pokemon or Shin Megami Tensei, you can only collect some set bosses. Each demon represents a class that you’ll recognise if you’ve played these games before but you may have to be patient until you get the party you want. Also when a new member joins they generally start at level one which can put you off using them straight away. 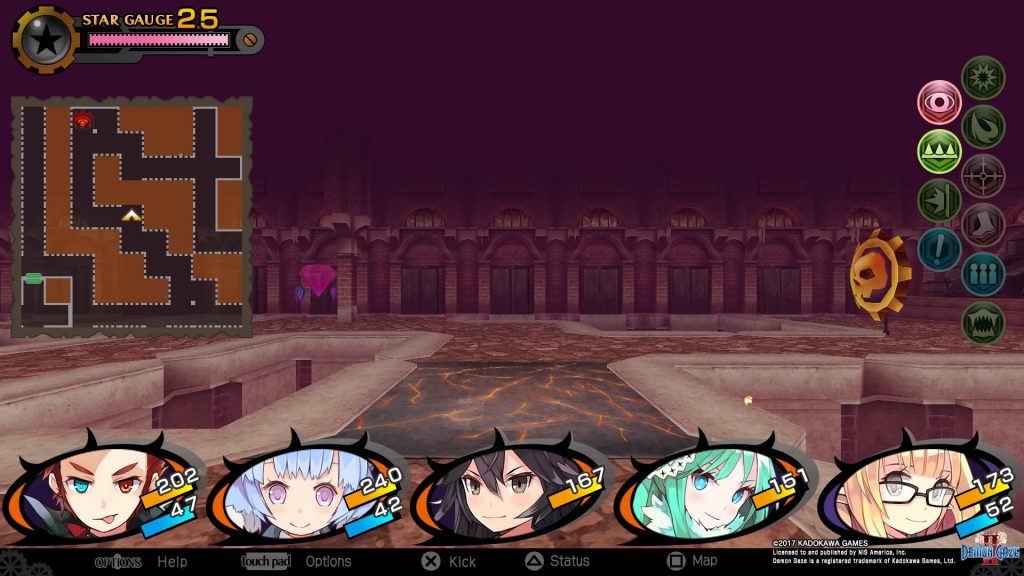 You are part of a resistance group trying to overthrow a powerful dictator who gains said power by throwing unknowing volunteers into a furnace and absorbing their souls. He too is a Demon Gazer and it’s his demons that you’re bringing onside. The story itself is so-so but the characters are varied and quite fun, with each demon having their own personality as well as the other resistance members. I personally changed the voices from English to Japanese part way through but they weren’t offensively bad, it’ll just come down to preference.

Your base of operation is an old theatre where you can buy/sell items, change difficulties, rent out rooms for bonuses and conduct maintenance on your demons. This equates to trying to find the correct area on a still picture of your demon, doing so will gain some affection and maxing out the bar will allow you to go on a date. Completing this will gain stat bonuses and skills for both you and your demons so is well worth doing. It probably sounds similar to Criminal Girls but it is far tamer than that and, although it doesn’t seem like it initially, there are male demons as well as female ones.

Once you’ve worked your way through all the story beats within the base you’ll go out into dungeons. This will be very familiar to anyone who’s played this type of game before. You fill out a map, one block at a time, as you work your way through the dungeon. There are locked doors, items, traps and enemy encounters spread around the map as well as some low frequency random encounters. Each map is split into districts and by taking over the districts you’ll draw out the demon that runs it and you can defeat and capture it allowing you to move on with the story. 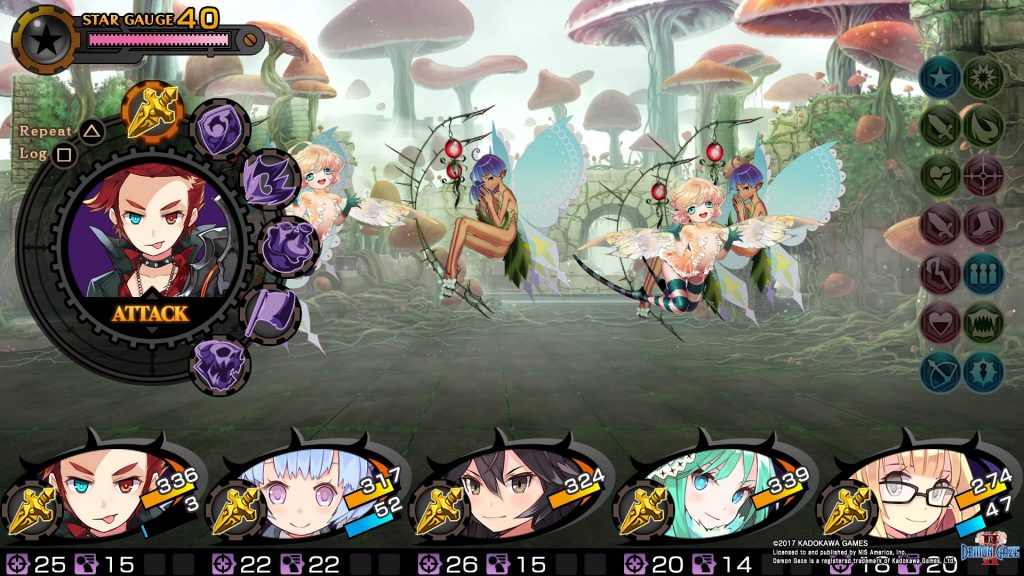 There are crystals that you must activate by putting item generating gems into them which represent different gear you can equip that will reward you with a random item of that type after a battle. This is the only way to get gear other than buying it which means you tend to get gear in waves rather than constantly acquiring new stuff. Activating all the crystals opens a portal that will lead to the boss demon after a brief puzzle. The dungeon exploration is again a little simpler than other Experience Inc. games but things do get more complicated as you get further in.

This is also true of the difficulty. On the default setting things remain overly easy for a long while but you will eventually encounter a boss fight that’ll cause you problems and then you’ll start getting tougher random battles too. As mentioned earlier you can change the difficulty to your liking if you want a challenge or want to make things easier but the default is far more forgiving than usual although it does eventually ramp up. You should have plenty of abilities to tackle the challenges as they arrive however. 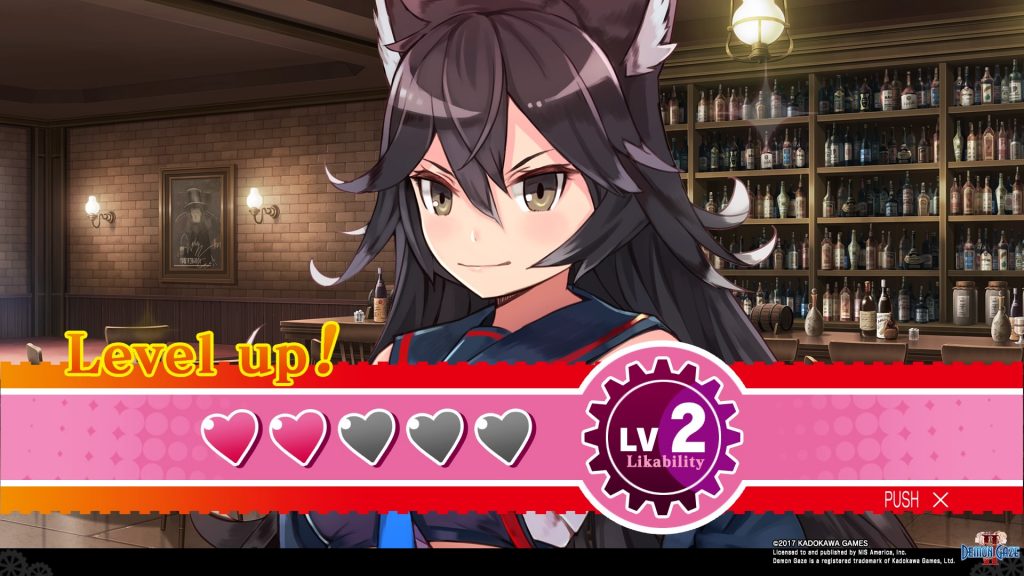 Battles are turn based with your characters lining up in rows against enemies who can also appear in rows. You can set how many you want in the front or the back so you can have one ally in the back providing support and healing whilst everyone else is in the front or you can even it out with more ranged attackers. You choose your actions for each character such as attacking, using an item or using magic or skills and then all the actions play out, including the enemy’s, in order of speed. You can press triangle to quickly blast through the actions if you’re confident, you can press square to check the battle log if you are unsure what happened and if you simply want to repeat your actions again then a press of the triangle button will set it all up quickly again which is great for getting through the easier battles.

Visually this will not test your PS4. It is also on the Vita which explains the low tech though not unpleasant visuals. The environments are 3D but are quite angular as everything has to be made of squares for the map but there is a variety between areas in theme and colour that makes them distinct. Characters and enemies are 2D but are high-res enough that they look good on a big screen.

Although not technically animated the still images move about and squash and stretch as they do actions. The one exception to this is the boss characters which have moving limbs but unfortunately it is quite a crude version of the technique that Vanillaware use and it doesn’t look great as limbs just flop around with little weight. Friendly character portraits are pretty good though they only have one pose with different facial expressions and the females have obviously had more attention paid to them than the males. 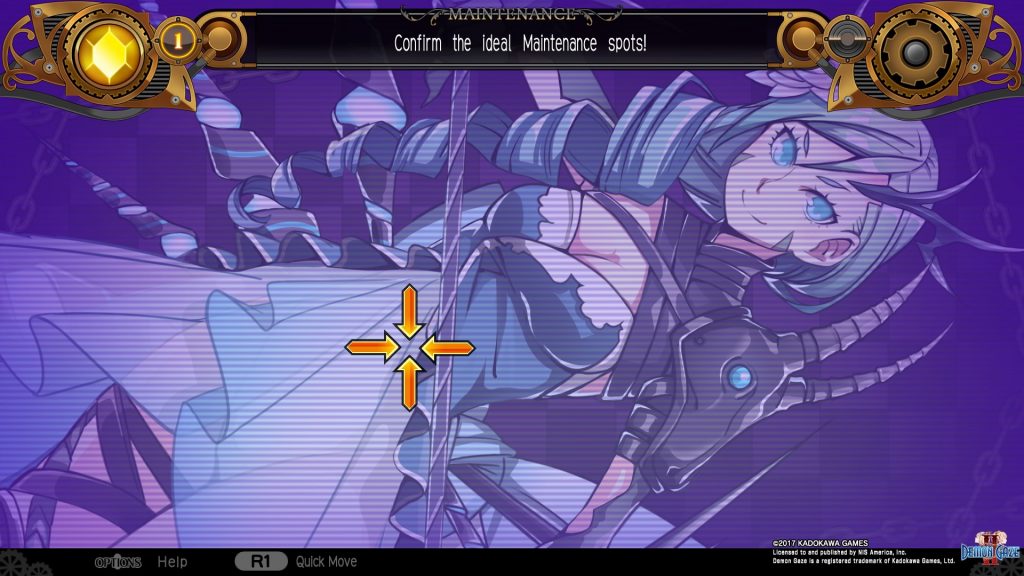 Demon Gaze II is one of the more interesting dungeon crawlers I’ve played. The difficulty level is set, by default, so that you don’t have to bang you head against a vertical difficulty curve straight away but at the same time the lack of difficulty in the early stages takes away a little of the reward as you can just plough through it. You can adjust the difficulty if you’re experienced with this type of game but I feel the lack of character customisation will disappoint many fans of the genre. The stronger focus on story and characters is very much a good thing from a developer who usually lacks in this department which gives you more of an incentive to continue playing than to just gain levels and get new gear. Fans of the genre will enjoy this with a few manual tweaks but, more importantly I feel, newcomers to the genre have a great introduction to what can be quite a daunting genre.

Demon Gaze II
8 Overall
Pros
+ Difficulty curve has been smoothed out somewhat
+ Pleasant characters and more story
+ Presentation is good as long as you remember it's a Vita game
Cons
- Less customisation than you usually get
- Default difficulty is too easy for a long while
- Doesn't take advantage of the system
Summary
Demon Gaze II offers a friendlier introduction to the first person dungeon crawler than most. More story and less customisation will upset some but the colourful characters and enjoyable gameplay loop will win over new players.