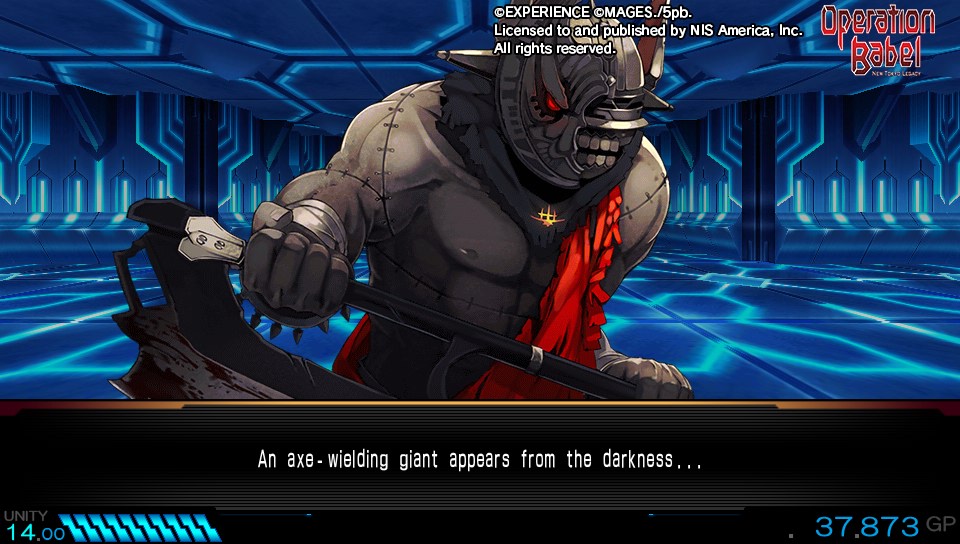 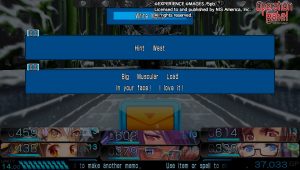 Almost two years ago I reviewed Operation Abyss: New Tokyo Legacy and here we have a direct follow up in Operation Babel: New Tokyo Legacy on the PS Vita. It’s from the same developer and continues on from the end of that game so if you’ve played it you’ll know what to expect from the basic gameplay but there have been some tweaks and additions, mostly for the better.

For those who aren’t familiar these games, along with Demon Gaze and Stranger of Sword City, are first person, dungeon crawling RPGs. They’re light on the story, world, characters and all that stuff which most JRPGs consist of and primarily concentrate on the dungeon exploring, levelling and developing of characters and discovery of loot. There are recurring characters and a story to follow but really these can be ignored and are just there to point you in the right direction as far as dungeons go. The world is explored just by choosing a location from a list.

It’s in the character creation and dungeon exploration that the fun is to be had. You have full control over your party and how they progress. The game gives you a balanced party of characters to start but if you want to make new ones you totally can. As with the last game you can choose from a Basic or Classic art style for the characters, with basic just having a detailed but stationary portrait whilst classic is much plainer but changes with the equipment you use. After selecting your portrait you can name your character, select their gender and age and all that stuff that doesn’t really matter.

You can also set their trait which dictates whether they are good, neutral or evil. Characters with the same trait will get on better. From there you can choose their type which determines their starting stats, their voice and then finally, their Blood Code. Their Blood Code is basically their Job Class and so decides what abilities they can learn and what part they’ll play in your squad. There are ten classes to choose from and it’s totally up to you what your party make up is. I’d argue that there are some classes which are required unless you want to make life harder for yourself as in the first game, like a Physician to keep your team healthy and an Academic to disarm traps and identify items but there are items which will do those jobs if that’s what you want. 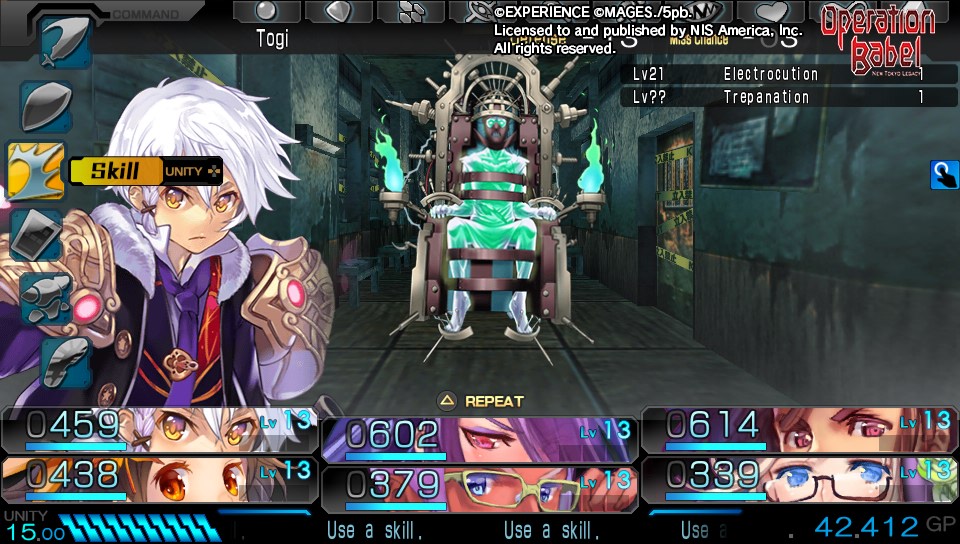 Exploring the dungeons themselves is relatively fast paced and rewarding. As you make your way around a dungeon a map fills in a square at a time, automatically filling in walls and doors and the like. There can be items to collect, hidden doors, illusory walls, traps and enemies to encounter, both in set locations and randomly as you walk about. Like the last game there are Dark Souls style messages on the floor left by other players which can be helpful most of the time.

Once in a battle it’s a turn based affair, as you select attacks, spells, skills, to defend or to use an item. Once you’ve chosen an action for every character you confirm your selection and your actions play out, as well as your opponents, in order of speed. Thankfully Operation Babel has learnt a trick or two from Stranger of Sword City and with a press of the triangle button you can repeat your last set of attacks which in you bread and butter fights saves a lot of time. Also when you confirm your selection you can press triangle again and rather than watch each attack play out (there is little animation so merely reading what happens as it happens) they all play out at once. Against the tougher enemies you may want to take your time a little more but it’s a great addition to expedite the random battles.

Upon victory more often than not you’ll gain an item which may be trapped. With the correct squad member or item you can disarm the trap and gain the item which will need to be identified before use. Although not as difficult as Stranger of Sword City you will want to explore dungeons with caution as if your team wipes you’ll either have to reload a save (there is no saving in dungeons without a rare item) or send in another team to rescue them. If you’re running low on supplies or require levelling up then it’s best to leave the dungeon and return refreshed and/or stronger.

You don’t level up instantly in this, once you’ve gained enough experience you must return to base and ‘Rest’. This costs money and, depending on how much you spend, can also restore your MP and HP as well. Upon levelling up you can put a point into whichever stat you wish and your character may learn a new skill or spell. 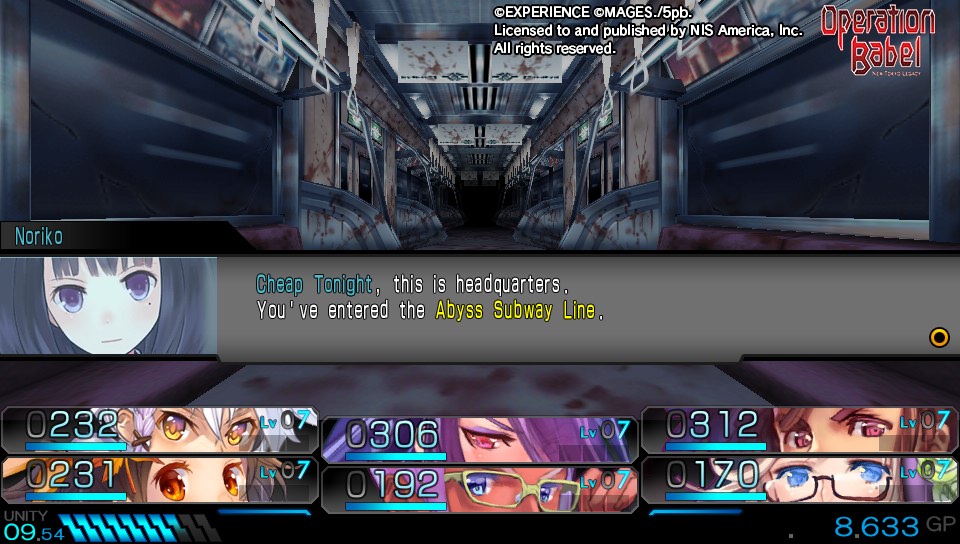 You’ll also have to identify every item you collected which is just busy work. You can pay to have it done or if you have an Academic then they can do it for free, but there is a risk they can fail and gain a status effect from it. You gain a lot of items in one dungeon run so clicking through the list is a bit of a chore and doesn’t really add much. In fact the menus have changed little from the last game which is a shame as they are clumsy to navigate and are labelled confusingly. Checking whether any new items you’ve gained are better for each individual character is particularly painful. Tidying that up would have been much appreciated.

Apart from the battles being quicker this is all much like the last game, but one major gripe I did have with Operation Abyss was that although you could change Blood Code there was little reason to as your abilities wouldn’t migrate over so you were effectively creating a new character. Here every character can have a sub-class. There is a slight trade off in that the experience you gain is split between the two but the gains are too good to ignore, with the new abilities which open up to you and more HP. Your base class dictates what weapons can and can’t be used which was a shame as I wanted to give my Physician a bow to make them more useful on the back row but I couldn’t and giving them a sub-class of Archer didn’t change that but it’s a welcome addition nonetheless.

Presentation-wise is much the same as the last game although there is no English voice over this time, only Japanese. The 2D work is as good as it was before and the 3D graphics within the dungeons are as basic, though not unpleasant. You’ll see a lot of returning enemies from the last game and I recognised some of the music too, though I did enjoy some of the tunes. If you consider this a continuation rather than a full sequel then these aspects can be forgiven. 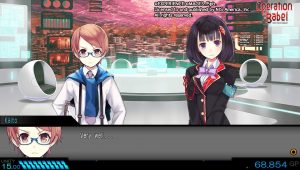 Bearing that in mind should you get Operation Babel: New Tokyo Legacy? I did enjoy it more than the first, but I’m not sure if that’s because I’m getting used to these games now so my learning curve wasn’t so steep or whether it is unquestionably better. If you enjoyed the last one then it’s a no-brainer, it’s pretty much more of the same with some minor improvements. If you haven’t played the first then I don’t think you lose too much by not knowing the story but what changes are there are definitely for the better. Maybe price will be the deciding factor for you, but if you’re into this type of game then this is another decent one on the Vita to sink your teeth into.

Operation Babel: New Tokyo Legacy
7 Overall
Pros
+ Dungeon exploration is fun + Plenty of character customisation options + Battle improvements are very welcome
Cons
- Menus are overly messy - Still some character restrictions in place - Story doesn't add a lot
Summary
Operation Babel: New Tokyo Legacy continues where Operation Abyss left off with a few improvements. The menus could have used some work but speeding up the battles and allowing more character customisation are great additions that make this a must buy for fans of the last game.