From the people who brought us numerous Neptunia titles comes a new JRPG/visual novel mix, Death end re;Quest. Mixing new ideas with a familiar feel, Compile Heart have stepped out from the safety of Neptune and her pals into a more serious arena but can the cutesy characters and serious storytelling fully gel? 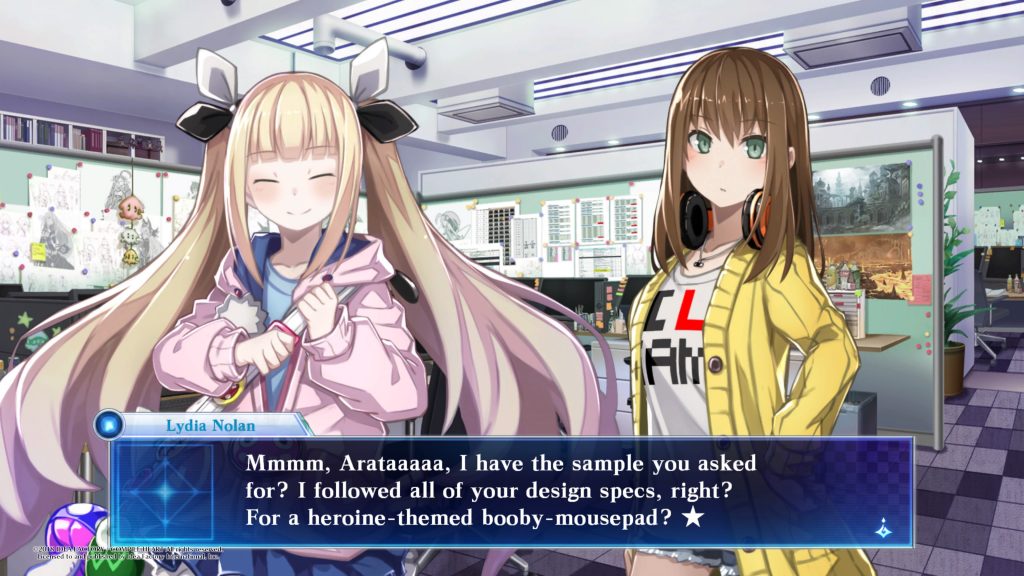 The game is split into two separate parts, though you will have to work through both aspects in order to progress. The visual novel side has you ‘playing’ as Arata, a programmer on an MMO VR title called World’s Odyssey that was cancelled a year ago. He discovers that despite unfixable bugs and one of the developers going missing causing the game to be shut down that the game is still running on an unknown server. Not only that but the missing developer is seemingly the sole person playing the game.

That person is Shina and you play as her in the RPG parts of the game. She has lost her memory so remembers little from anything other than the game world, but upon being contacted by Arata remembers him and that to escape the game she can’t simply remove the VR headset, she has to complete it. There is plenty more to the story, which after a very, very slow start manages to hit its stride bringing other characters into the mix and revealing the mystery behind Shina’s disappearance and why World’s Odyssey is still active. The two sides of the game mix rather well and don’t feel like two individual parts.

That’s probably helped by the RPG side also being quite text heavy. You get to run around dungeons, collecting items either for use in battle or to help progression and you’ll encounter enemies who you can attack to get an advantage when you enter combat, but every piece of progression is bookended by dialogue. If you’re not one for reading in your games then you should stay away as there does seem to be more text than RPG gameplay, though when you do get into combat it has some interesting ideas of its own. 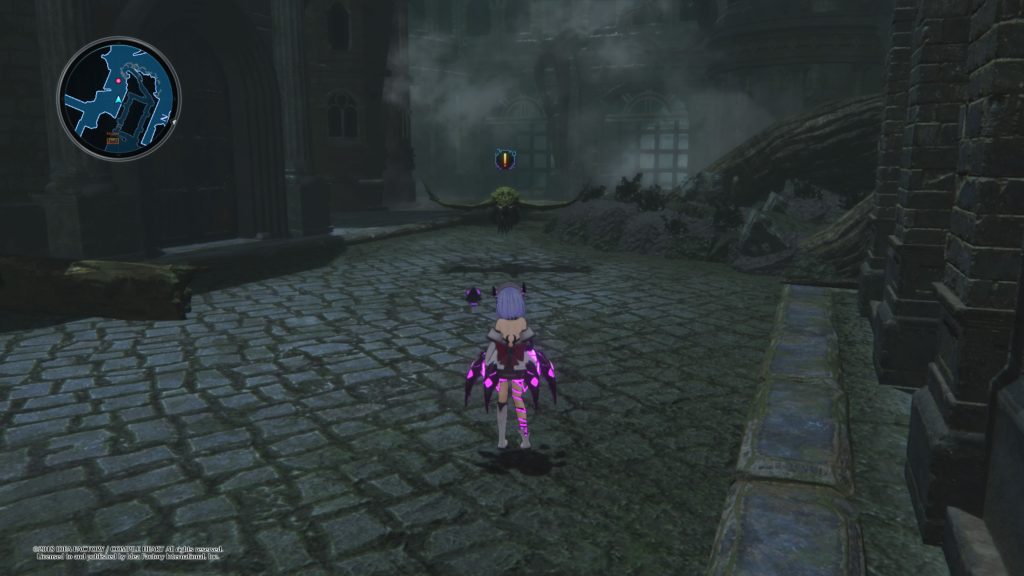 Your party will spawn in an arena that they can fully move around which will have multiple enemies scattered about. Each character moves individually and can choose a combination of three moves to use. This can be three basic attacks, a heal spell, followed by a buff, followed by a magic attack or whatever. Combining certain moves will teach your character new moves, increasing their repertoire permanently. Also, and this is the key to battle, certain moves will knock back enemies. Knock backs will allow you to get some extra damage on an enemy by knocking them into each other, the arena boundary or preferably one of your other party members, initiating another hit. If that hit then collides with the third member of your party then they will do the same and you’ll get some much needed bonus damage. If you imagine John Virgo in an RPG, knocking enemies around like a trick shot then you’ll be on the right track.

On top of that are the bugs present on the arena floor. They take the form of circles of light and if your character touches it then they will take whatever stats the bug represented. Usually that’s a percentage of damage, but can also replenish your magic or give buffs or debuffs. Knocking enemies into the bugs will clear them from the board making it safer to traverse but also increasing the enemies glitch state. If it reaches 100% then the enemy will regain all their health and become more powerful so is best avoided. Your characters can also become glitched which not only knocks off the majority of their clothes but also grants them access to an extra powerful special move.

Also if you remove 50% of the bugs from a level then Arata can help out in the battle using his programming abilities. He can apply buffs like increasing or decreasing glitched levels, he can summon defeated boss characters to help out or, more interestingly, he can change the genre of game for a brief moment. Changing the game into a third person shooter will allow one of your characters to shoot from a behind the back perspective for a short while for example, or a puzzle game will challenge you to clear squares of a certain colour which will be converted into damage depending on how well you do. 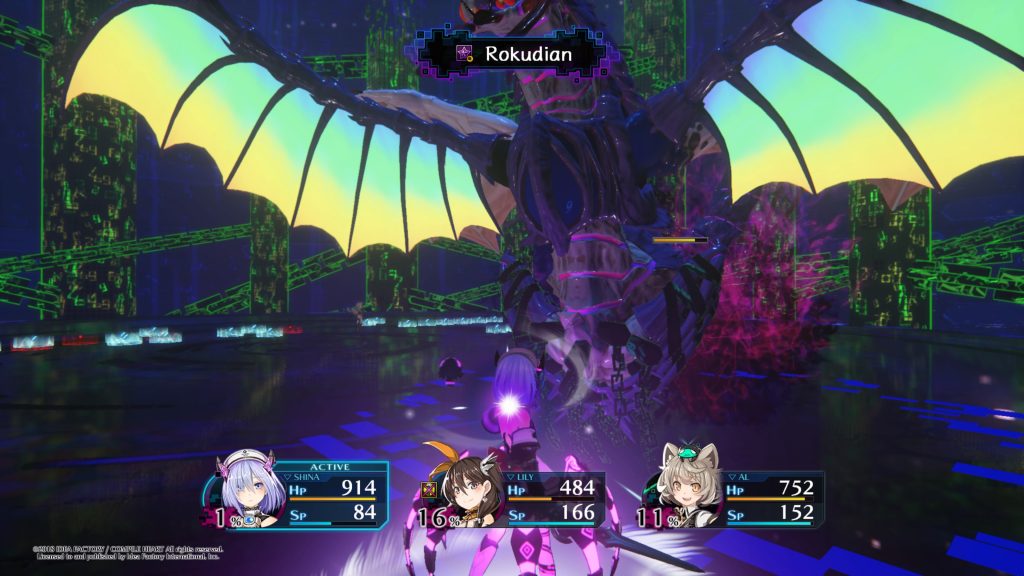 That’s a lot of systems and it works both for and against the game. As there is so much going on the regular battles during exploration can drag from the mid game onwards, whereas boss fights are always fun as you use a combination of regular attacks, magic, knock backs and Arata’s programming to overcome a tough foe.

When you enter a dialogue sequence in either side of the game there is a high chance that you’ll eventually be given a choice to make. Making the right choice will progress the story as you’d expect but quite often picking the wrong choice will result in an instant game over. Unusually you’re actually encouraged to find as many game over states as you can as you are rewarded with items for each different scene you see. More often than not you are allowed to save mid visual novel sequence which is lucky as otherwise you’d be tasked with repeating a lot of gameplay again, though it seems your experience and items do carry over if you do happen to be pushed back.

The instant death sequences can also be weirdly graphic. Not through visuals but through descriptions and voice acting. It is very much at odds with the atmosphere which although serious often has moments between your party members of silliness or light fan service much like in the Neptunia games. I wouldn’t mind too much but some do go on for a silly amount of time that had me raising an eyebrow at why it was necessary. 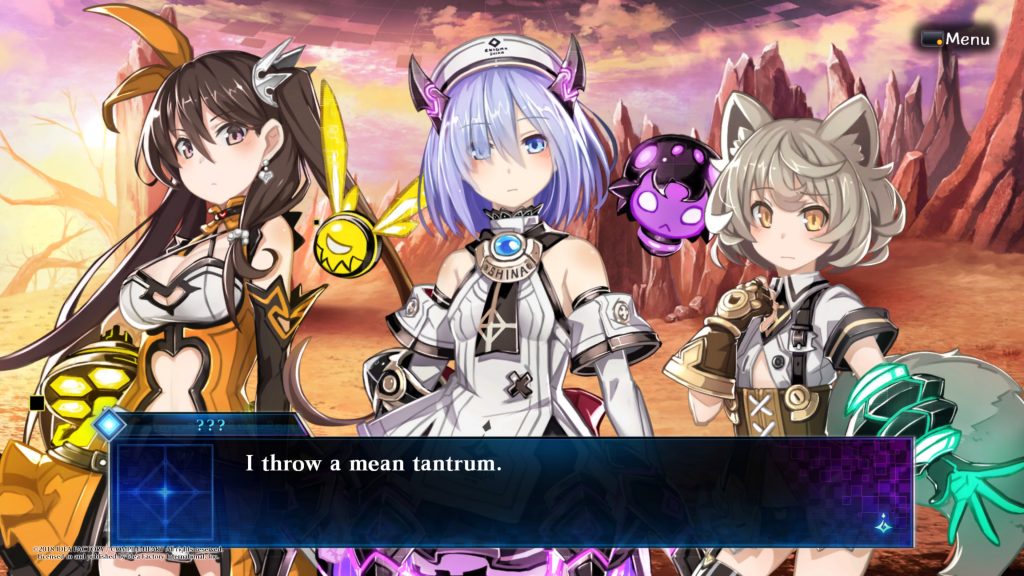 For the right player though Death end re;Quest offers a JRPG/visual novel experience which has plenty of interesting ideas. The serious tone of the story makes it different from the Neptunia games but the cutesy characters fit that mould well if that’s what you’re into. If you lack the patience for a visual novel then this is not the game to convert you but if you’re all about the story then you will happily see past the game’s issues and enjoy the ride.

Death end re;Quest
7 Overall
Pros
+ Lots of combat mechanics
+ Once the story picks up it's very good
+ The two genres blend well
Cons
- Very slow start
- Combat becomes a bit of a slog in the mid game
- Extended death sequences feel out of place
Summary
Death end re;Quest is half JRPG and half visual novel. The serious tone combined with the usual Compile Heart characters don't gel perfectly but the story is worth seeing through after a slow start and the combat has plenty of interesting ideas.