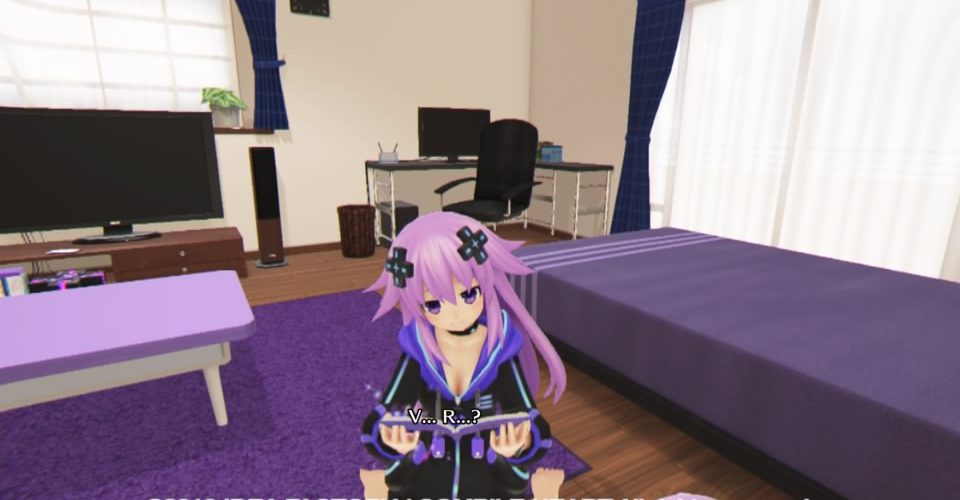 Megadimension Neptunia VII released back in early 2016 to pretty good reviews. The series has no doubt improved since the first release, but we’ve also seen re-releases and spin offs trying to capitalise on the popularity of the characters. According to the wiki there have only been four main entries to the series since 2011 (in the West) but there have been six spin offs and three remakes. This is the forth re-release, Megadimension Neptunia VIIR is Megadimension Neptunia VII but with an extra VR portion and some other tweaks. Having not played the original release I can’t say exactly what has changed, but I’ll review it as a stand-alone game whilst hopefully also informing returning players. 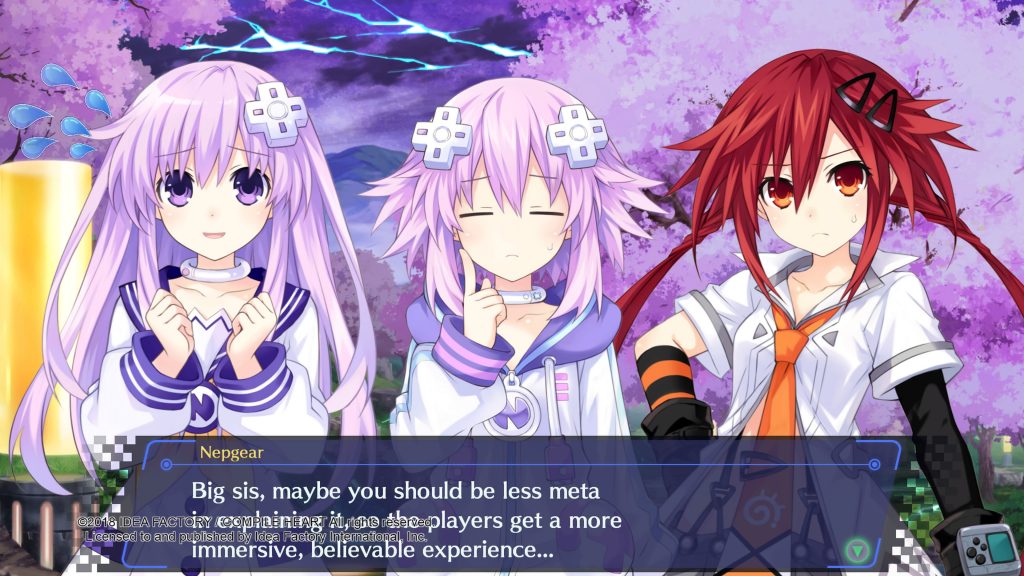 Players of previous mainline entries will feel right at home, despite the changes this is still recognisable as a similar JRPG. There are a lot of visual novel sequences so if you’re here for the characters then you’re in for a treat. All of the main cast are here with Neptune still breaking the fourth wall and never taking anything seriously and Blanc being a softly spoken girl until transforming where she becomes rather foul mouthed and aggressive. If you’ve not played one of the previous games then you will be at a disadvantage but the game does try and introduce characters as they appear. You can choose between Japanese and English voice acting but know that there is far more reading than voiced work, with only the most important scenes receiving voices.

Just a quick pointer for those who don’t know, the characters of the Neptunia games are anthropomorphised game companies with Sega, Sony, Nintendo and Microsoft represented. This doesn’t really mean anything as far as their personalities are concerned but you get the odd nod here and there and all the games are pretty silly, preferring to crack a joke than play things seriously.

The game opens with Neptune and Nepgear being sucked into another dimension by turning on a console with a swirl on the front (sounds like a fantastic system). This begins the first portion of the game where they meet a girl named Uzume who has amnesia but is the last living human battling a giant who is tearing the dimension apart. Completing this sends you to another dimension and another. The story does come back around but, despite there being a huge amount of story sequences, it’s not the story that makes them interesting, it’s the characters. I don’t know if this is better written or if I’m just coming around to Neptunia‘s style but I found the characters to be less irritating this time around, though I’ve never overly disliked them.

I do believe that the story is exactly the same between VII and VIIR so if that’s your main reason to play then you might want to reconsider. 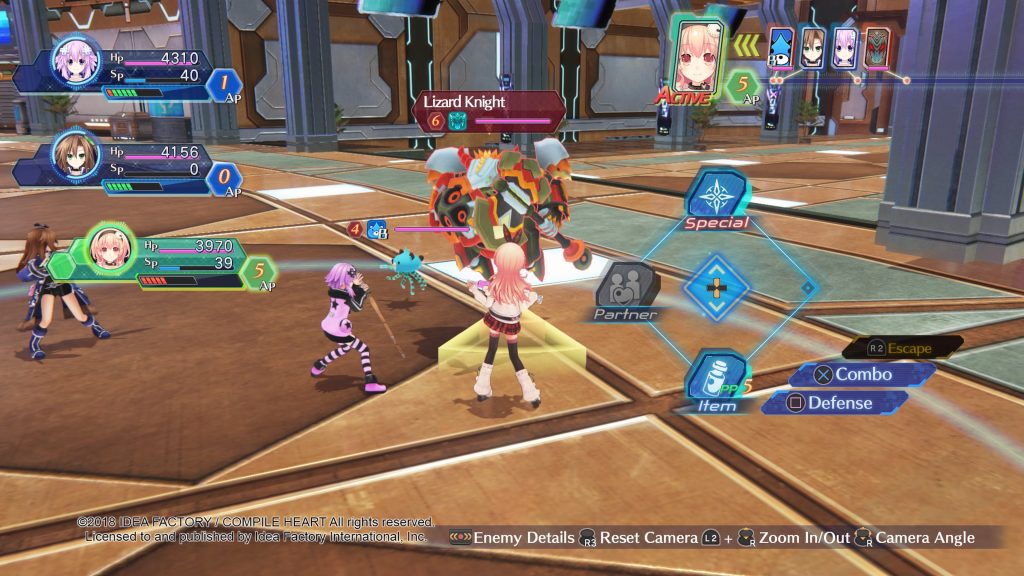 When you do get around to playing you can choose a location on a map which will load in a dungeon. Again, players who have played previous entries will recognise a lot of the locations and music which accompanies them but the PS4 has provided an improvement to the visuals. They’re not going to be taking the thunder from any AAA games but they’re colourful with a decent frame rate.

Once in a dungeon you’ll see enemies roaming around, treasures to collect and objects to smash. Attacking an enemy will give you the advantage of going first when the battle arena loads in, miss or get caught from behind and the enemies go first. In the arena you can move a character around within their range of movement with their attack range represented by a red area projected in front of them. Depending on the character and weapon the attack area might be larger or longer, but get an enemy (or more) in that cone and you can attack them. As you initiate the attack a menu appears giving you the option of what attack to use, each having a different amount of of damage dealt and number of attacks. Each attack costs AP which you can choose to use for a longer combo or save for your next turn to accumulate more points.

Special moves cost a little more AP and also SP. These have different areas of effect, can inflict status effects and have a brief animation to show off. Add to this combination attacks which depend on your characters positioning and both character’s resources and you have quite a few options to play with.

I actually found the battles to be incredibly easy however. There was the odd moment where an enemy would constantly attack the same character and they’d go from full health to dead in one set of actions but generally speaking most fights would be over in a couple of rounds including some of the bosses. You regain all health at the end of battle and you generate AP and SP at the beginning of each turn so there’s no need to rest or use items or abilities between battles. I didn’t mind that and it’s preferable to an uneven difficulty where you’re breezing along and then suddenly can’t progress without some considerable level grinding but with the ratio of gameplay to visual novel sections already unbalanced, breezing through the gameplay sections makes them even more fleeting. 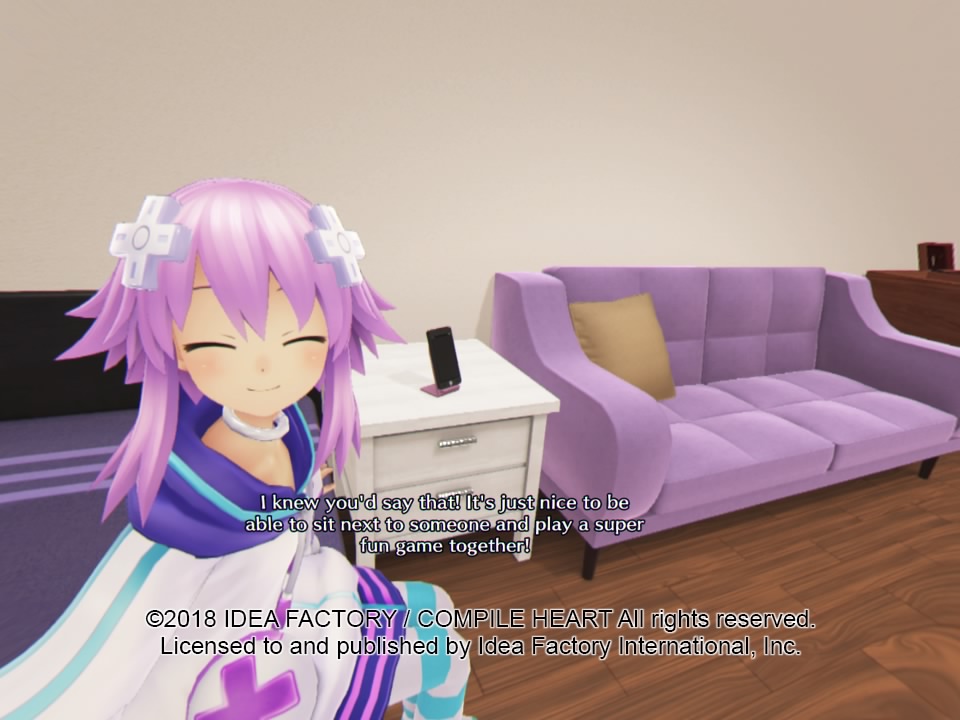 Outside of the dungeons there are a couple of things to keep you busy. Eventually you gain access to scouts which you can send to any dungeon you’ve opened to collect money and items for you. They work in real time and can be upgraded with special abilities to reveal hidden treasure, allow for other scouts to join them in the same dungeon or even find new scouts. They are easily accessed from the menu but you do have to manually collect the items off them every time they return which can get annoying since they’re only gone for about five minutes each. Jumping into the menu to click on them can be a bit tedious, especially if you’ve got quite a few and they’re staggered enough that you’re going into the menu after every fight.

Then you have the main selling point of this re-release, the virtual reality. The majority of the game is VR-free, you can play it in VR the same way you can play any game in VR with it just showing a virtual screen in front of you but there is only one portion of the game that actually puts you in a virtual world and even then a VR headset isn’t required, you can play them on your television screen if you lack the equipment.

Some will just happen as you progress the story whilst others are in a side menu in the ‘Player’s Room’ and will unlock as you go through the game. From here you can also view unlocked scenes, artwork and customize your room with dolls, posters and other Neptunia merchandise. With the VR scenes you choose a girl and then they teleport into your room from Gamindustri and they will just talk at you for a few minutes. Sometimes a marker will appear which if you look at will get a reaction from the girl (if it’s on her face she may ask why you’re staring and act all coy) or they’ll ask you a question which you can nod or shake your head to answer. Beyond that you’ll just be sat there as they talk at you about anything and everything.

I’m not sure what you’d call it, but it’s similar to other titles appearing in the VR space like Summer Lesson. I’m guessing they have more to them as they’re full blown games but if you want to get the feeling of sitting next to Neptune or accepting sweets from Blanc then this may offer you something. I personally didn’t find them that interesting although it’s testament to the voice acting and characters that I was never bored. More could have definitely been done to flesh things out, with more interactions to get you involved. When Blanc brings you sweets she simply puts them on the table for example, when she could hand them to you or feed you one or something else that makes you feel like you’re part of the scene as opposed to just being acted at. 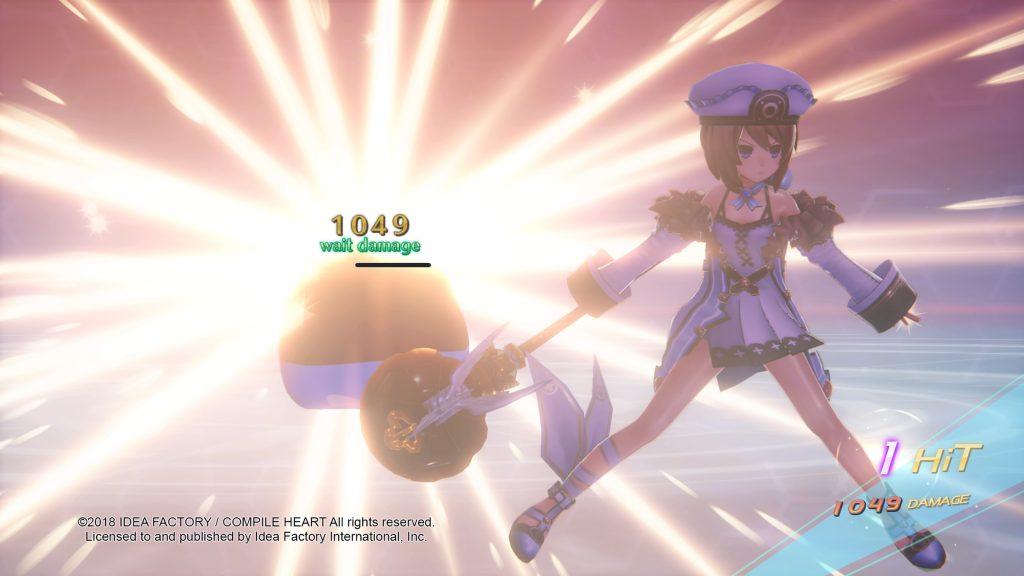 Fans of this series love the characters and Megadimension Neptunia VIIR offers lots of fanservice in more ways than one. If you’ve played the previous version of this game then the more risqué illustrations you’ll already have seen but occupying the same VR space as Nep-Nep and co. may be enough to tempt you back though these sections ultimately feel superficial. If this is your first time playing VII then it’s a very enjoyable title. The balance of visual novel to gameplay isn’t quite right for me but the characters drag things along nicely and the dungeons, whilst overly easy, offer enough options in battle to keep things interesting.

Megadimension Neptunia VIIR
7 Overall
Pros
+ Well presented across the board
+ Combat offers options
+ VR is new and interesting if a little undercooked
+ Characters are entertaining if nothing else
Cons
- Story is the same as VII
- Battles are overly easy
- Still visiting the same locations
- Characters will annoy many
Summary
Megadimension Neptunia VIIR offers the same story as the non-VR release from two years ago, but does make some gameplay changes on top of the addition of virtual reality segments. Only the biggest fans should double dip but this is still a good game for those who have yet to experience it.