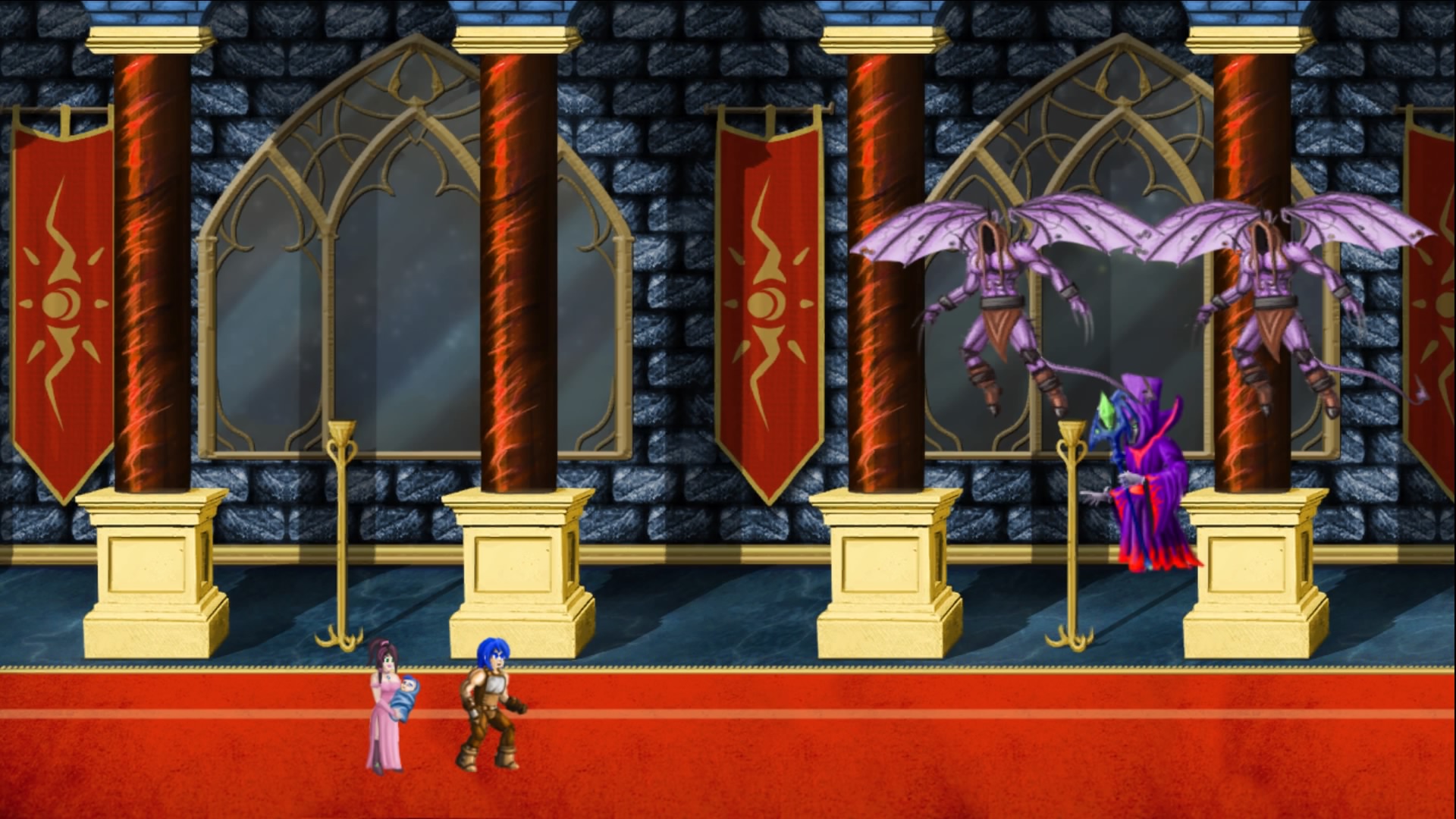 I recently mentioned my history with Games Factory in a recent review and on the podcast, attempting to make 2D versions of some of my favourite games which just happened to be 3D at the time. If I was to try and make a Ghouls ‘n’ Ghosts style game I’d like to think I’d do a better job than Cast of the Seven Godsends manages… 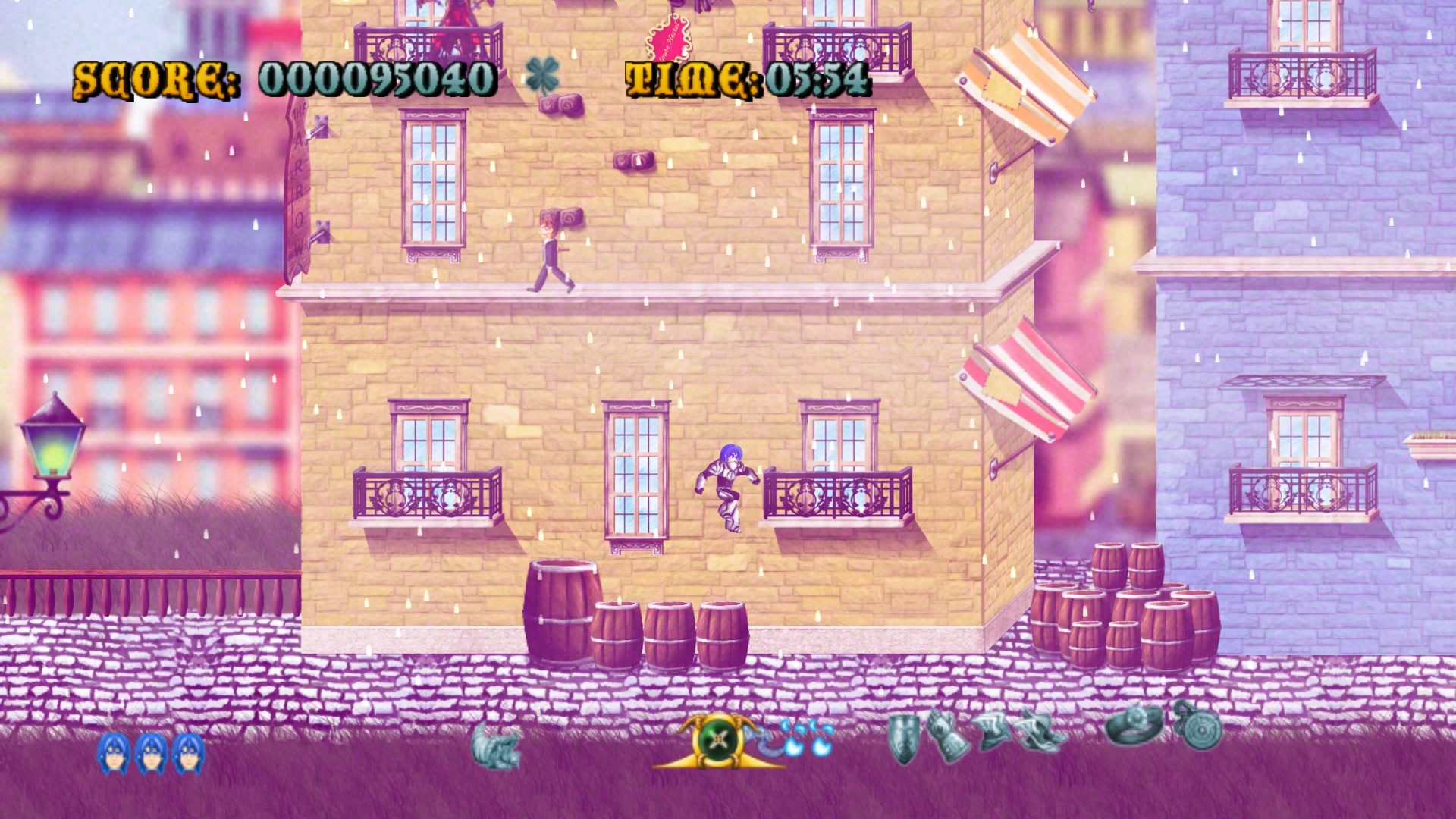 From the independent Italian developer Raven Travel Studios, Cast of the Seven Godsends – Redux is an improved version of the original PC release. Heavily inspired by Ghouls ‘n’ Ghosts and other games of its ilk the developer is really trying to play on nostalgia although it does have a few ideas of its own.

You play as Kandar who, in a scene very reminiscent of Super Ghouls ‘n’ Ghosts, has his baby stolen by the evil emperor Zaraaima. You set out across six levels (with a secret seventh level if certain requirements are met) in order to save both your child and the land of Dareca with the help of the seven gods. Really all you get is the intro cinematic and then you go on your way, I took most of this from the website. There is a reasonable amount of text when you meet bosses but these mostly boil down to “I’m going to kill you”, “Not if I kill you first” except translated poorly and I’m not even sure if it was well written in the first place. Just one example of many I could choose from would be “I’ll be faster than time. Face me again, and i’ll crush you once for all”. Not great I’m sure you’ll agree.

The actual gameplay is designed to be as simple as possible to remind you of 80’s arcade hits. You have two buttons, jump and shoot, though weirdly the circle button is jump and the cross button is shoot. You can adapt but it seems an odd choice. You run from left to right throwing whatever weapon you happen to be holding at the enemy in the same style as Ghouls ‘n’ Ghosts. You can pick up different weapons and some are much better than others, which again is reminiscent of Ghouls ‘n’ Ghosts but surely you want to design your game to be the best it can be, not to remind you of the bad elements of a classic game?

On your travels you can pick up armour, again like a certain classic game, which will give you more hits against the enemies. Cast of the Seven Godsends isn’t as strict as Ghouls ‘n’ Ghosts in that you can take a couple of hits before losing your armour or dying. If you’re wearing armour and you find another armour pick up then you can choose from one of the seven gods to grant you special armour. It takes the same amount of hits but depending on your weapon and god choice you’ll get a different attack and you can hold down the attack button to charge a super move that can do anything from freezing all enemies on screen to summoning a plague of locusts. It’s an interesting idea and is certainly the key to doing well. 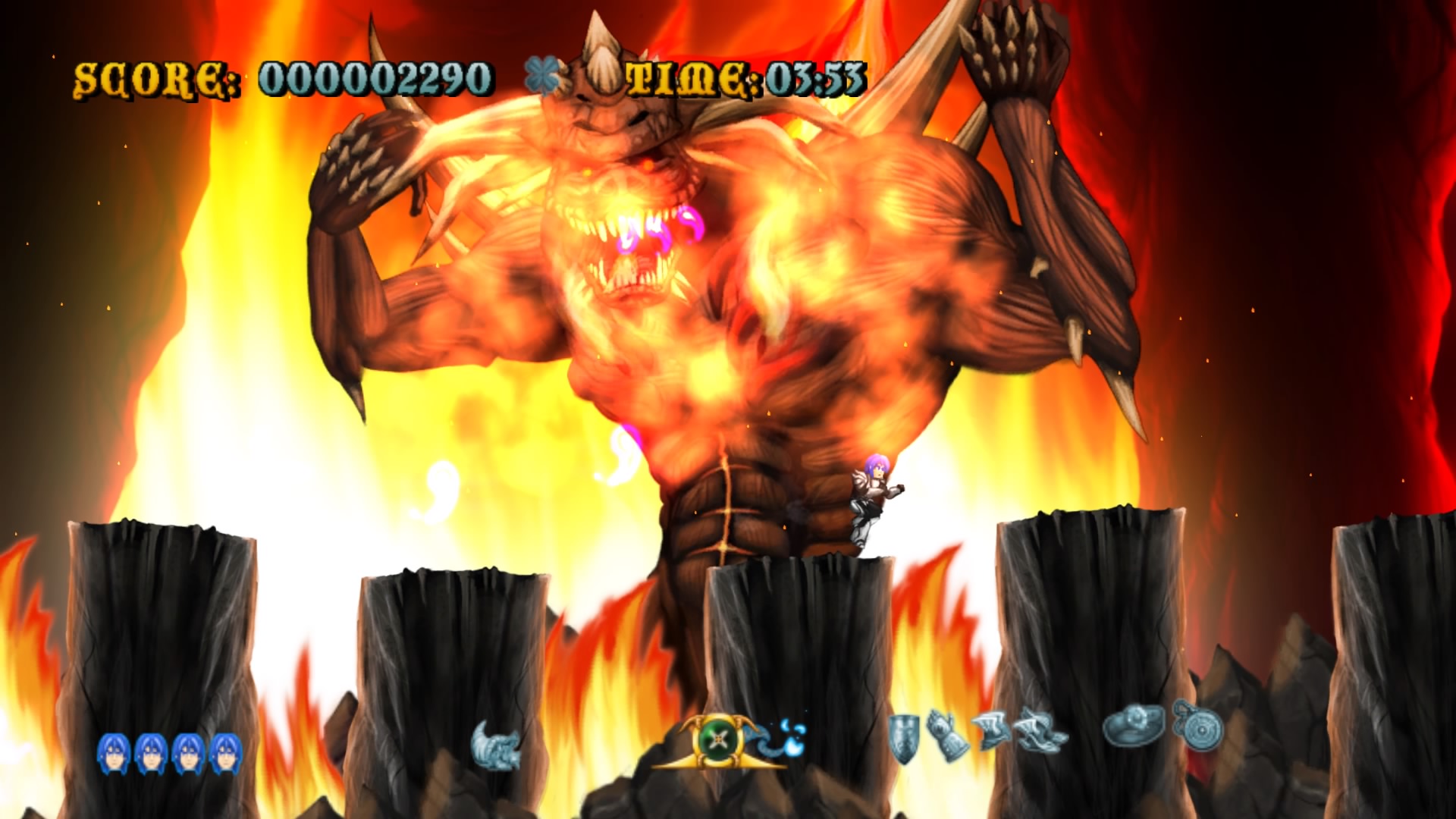 There are some light platforming elements but luckily the jump controls are quite forgiving giving you decent air control so these sections aren’t too bad. Enemies will generally continuously respawn in certain areas and the majority take multiple hits to kill or can only be damaged by attacking the head which is a bit of a chore. Even worse are enemies that have shields and can just block your attacks incessantly. You can mash the attack button pretty fast but I’d have rather have been rewarded for accuracy than tenacity.

There is a mid boss and end of level boss who can be suitably large but lack the memorable patterns of the games they’re trying to ape. Some are better than others but I’ve found that firing off my super if I have it and then mashing on the attack button (to attack the head generally, of course) to be the quickest and so best way to put down a boss.

The graphics do not help in this regard. I have stopped myself from mentioning the graphics straight away as they do not leave a great first impression. Obviously they are 2D but the drawings and animation are incredibly poor, failing to give any feelings of nostalgia but more of a child’s drawings. Don’t get me wrong, that isn’t what they were going for, it wasn’t a design choice. Look around this review, they are just bad, flat drawings. The backgrounds and environments aren’t as bad as the characters but that’s hardly high praise. The music on the other hand is generally pretty good with some catchy tunes.

Enemies and bosses will often fire bullets that are the same colour as the backgrounds and so even seeing the attack let alone dodging it is more reliant on luck than skill. It’s like the developers were fans of this genre but didn’t do any research into why some are better than others. Why do I adore Super Ghouls ‘n’ Ghosts? There are elements that could be described as ‘bullshit’ until you learn the levels and the enemy behaviour but the atmosphere that game generates is incredible, the feeling that you are travelling across the land getting closer and closer to the big bad. Cast of the Seven Godsends fails in this regard.

That’s not to say it’s not fun. The gameplay is fast, the game is quite generous with the amount of lives and continues it gives you so you can keep banging your head against it and if you’re successful the game isn’t too long at around an hour. You can save the level you’re on though it doesn’t save your equipment set up so is best used as a training method on certain levels. There are quite a few secrets as well from multiple endings to the Black armour which you can only get by obtaining three specific god armours in a single life. 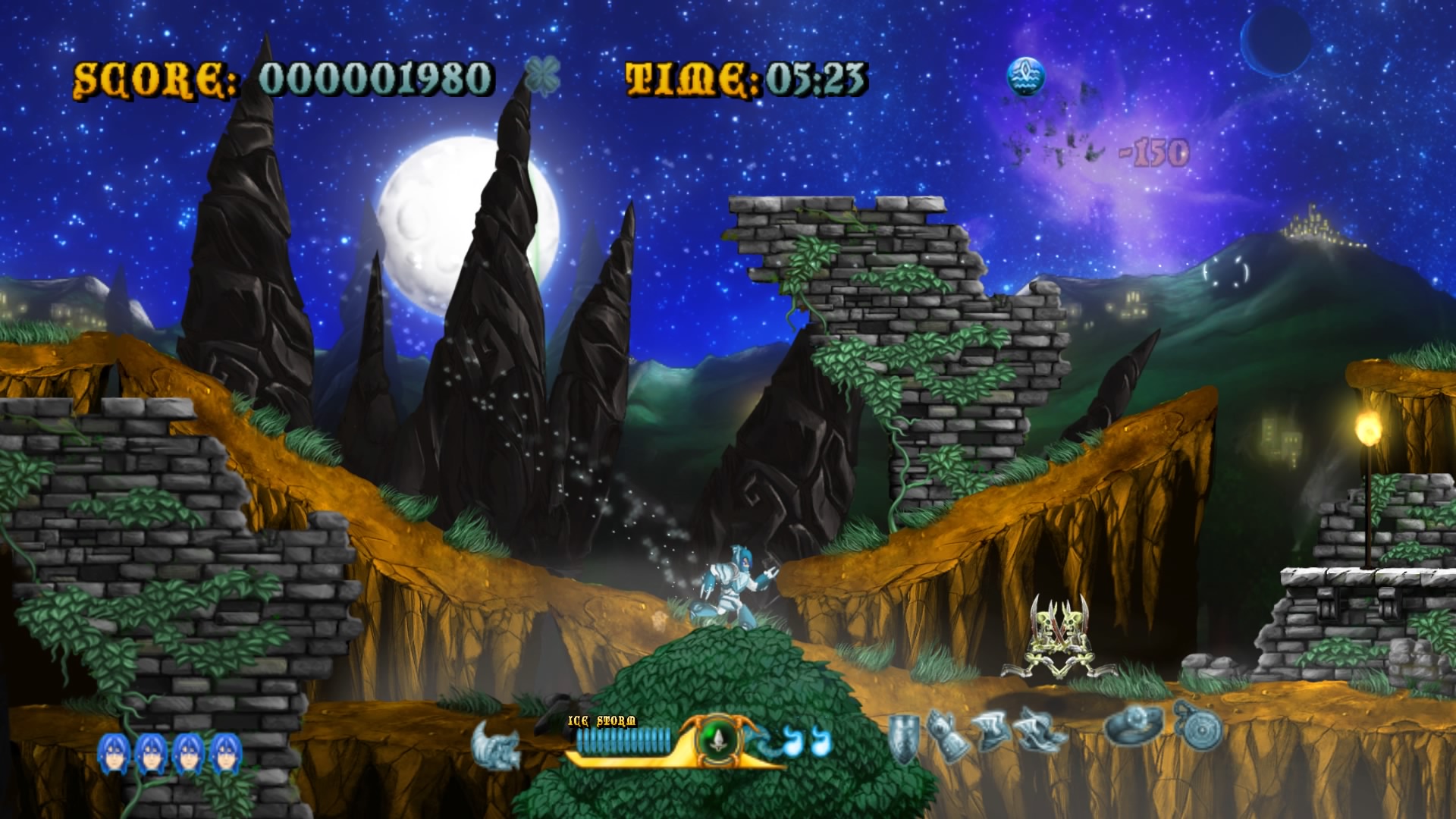 I got pretty far in my initial playthrough and after a short break I went back again. Then the next day I tried again. And again. Cast of the Seven Godsends – Redux is poor in a lot of respects but as a pick up and play game it succeeds at making you want to give it another go. I’m not going to recommend Cast of the Seven Godsends – Redux, there are too many really good games about at the moment, but if you still fancy giving it a go it is reasonably cheap, though I’d argue to wait for it to be in a sale.

Cast of the Seven Godsends - Redux
4 Overall
Pros
+ Pick up and play gameplay
+ God armours are a good idea
+ Generous with lives and continues
Cons
- Art
- Game doesn't feel like it rewards skill
- Tries to rely on nostalgia but misses the mark
- Poor translation
Summary
Cast of the Seven Godsends - Redux tries to capture the magic of old run and gun classics and falls way short of the mark. The various god armours are a good idea and the pick up and play nature is to be applauded but all aspects of the presentation are below par and the gameplay and level design is weak when compared to the greats it hopes to emulate.