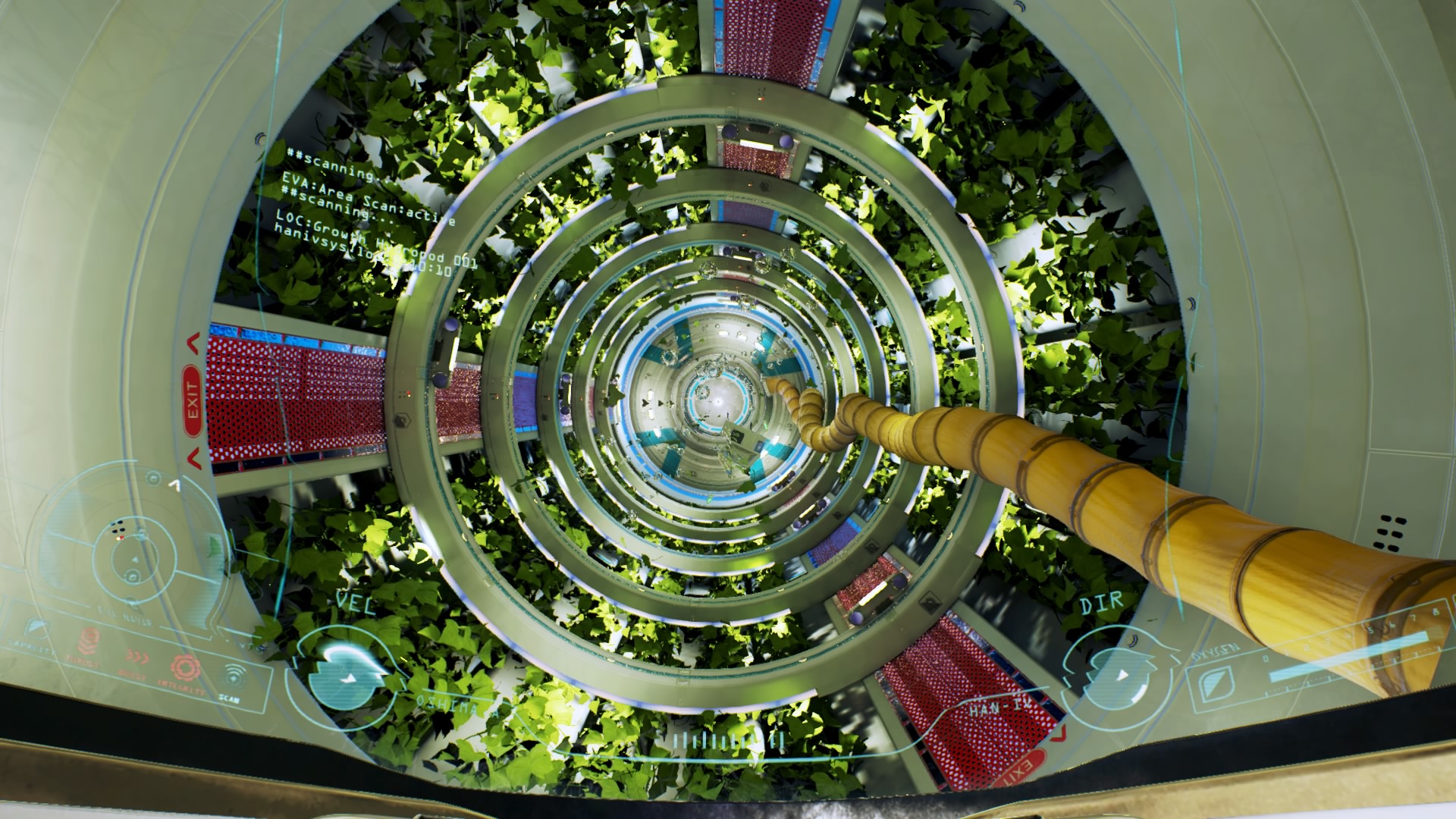 Despite being out there for sixty-odd years, there’s still a tremendous mystique about making it to space. ADR1FT by 310 Digital is looking to touch upon the pressures of being miles and years away from Earth. This first-person adventure aims to deliver a thought-provoking story amidst a four-hour spacewalk and, for the most part, it succeeds.

You play Alex Oshima, the Captain of the Northstar IV which has suffered some kind of catastrophe. Your objectives are to bring the ship’s main systems online and gather as much information as you piece together the hows and whys of disaster. Plot is doled out in audio logs and interactions with mission control. There’s not a whole lot of intrigue but there’s some good moments of character development. It shows its hand relatively early so the moments of tension come from gameplay but I still found it to be a decent tale. 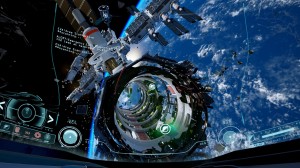 Initially promoted as a VR cornerstone, the movement at your disposal is appropriately floaty and plodding. A brief, mandatory training session dishes out the basics and bestows upon you the importance of managing your oxygen levels. Its not exactly nuanced but its enjoyable to float from point to point as you consider whether to use your suit’s thrusters or get to areas under your own inertia. Moving on all three axis does present some problems with orientation and you can get turned around as you chase objectives, but the game gives you the option to right yourself. As you’re doing a lot of it, its nice to know moving around the destroyed Northstar IV is enjoyable enough.

With oxygen being a managed resource, the early going does present some time constraints. You begin at half-capacity so, if you’re not direct, you can find yourself caught out in the void of space. Oxygen bottles are scattered liberally throughout and you unlock stations that replenish supplies but it’s still frustrating to be caught short. There is nothing more infuriating than being low on oxygen only for the bottle you’re grasping for to be just out of reach. With physics influencing everything, it can lead to some dumb scrambles for objects moving faster than you. The countdown of your oxygen meter provides the game’s only real threat and at least delivers the occasional moments of tension. Later on you’re given larger chunks of debris to avoid but the pressure starts to subside once your suit is upgraded. 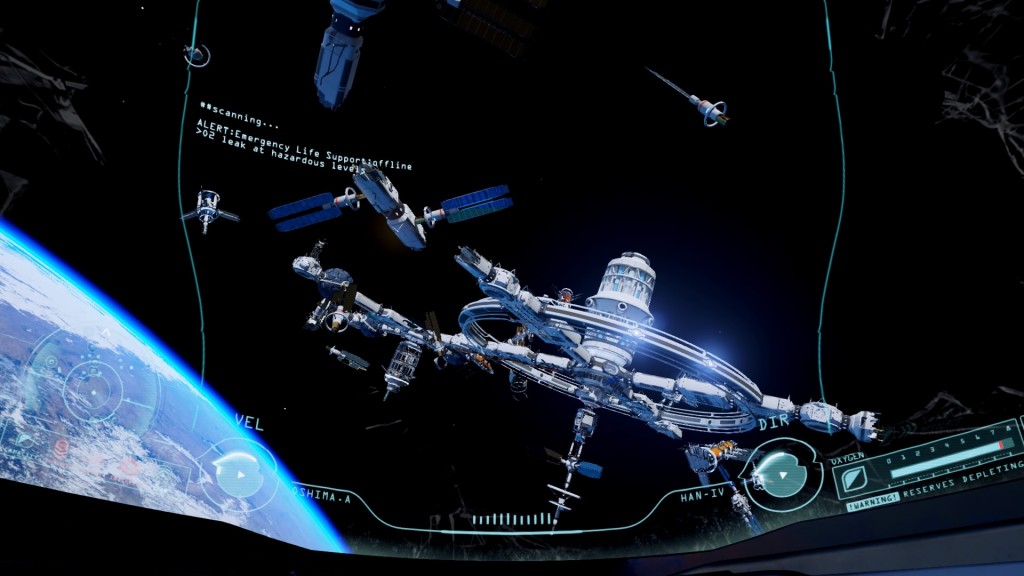 The whole game feels like an elongated fetch-quest as you look to turn on systems and replace faulty cores. Once your done with an area, you move on to the next to follow the exact same pattern. If you’re not enthused, that can certainly make a four-hour experience long in the tooth. There are collectibles and tokens to grab but they’re not essential. They’re mostly on the beaten path but don’t really add more weight to the characters or world. You can ping the immediate area for points of interest which help you meander through the larger gaps

ADR1FT is visually striking. The sterile sharpness of the environments are quite stunning at first glance. Indoors, the corridors can get a little nondescript which can make navigation confusing, unless you obey the handy mini-map. It keeps you heading in the right direction, for the majority. Spacewalks look genuinely glorious as you pick your way through debris or check out the litany of satellites in orbit. Over longer distances, objects will draw in but it feels like a rare occurrence. Restarting from checkpoints, rather worryingly, resulted in a string of crashes. I didn’t lose any saves and it seemed to happen just in the early going, but its still a concern. 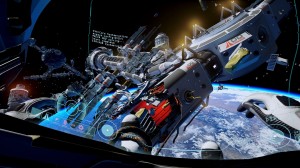 Sound is mostly sparse with electronic beeps of your suit and Alex’s breathing punctuating the silence of space. Dialogue is well acted and the music on offer is appropriately space-like but is also constant. Personally, I turned it off and focused on the ambiance instead.

I realise I’m an outlier but I genuinely like ADR1FT. The movement feels well-paced and the discovery of new areas kept me interested, despite the routine nature of the objectives. I wound up marathoning this and it just about held together for an evening. The story doesn’t really twist or punch but its presented well enough with some magnificent visuals. Response has been very middling, even on the VR platforms and, with no plans to bring it to Playstation VR, that’s a shame. At £15.99, it’s maybe a tougher sell. I’d encourage you guys to check it out but maybe wait for a more palatable price point.

ADR1FT
7 Overall
Pros
+ Great visuals + Enjoyable movement mechanics + Decent story
Cons
- Objectives don't vary - Prone to crash in the early stages - Loses its edge as it goes on.
Summary
Whilst it loses some of it's goodwill in the latter stages, I can't help but enjoy the look and feel of being out in ADR1FT's void. It tells a decent, if not hard-hitting story. Once you get a handle on navigation, it pushes you forward nicely. There's not much variation in what the game requires of you but I found it enjoyable. It's worth a look if you're curious.
We use cookies on our website to give you the most relevant experience by remembering your preferences and repeat visits. By clicking “Accept”, you consent to the use of ALL the cookies.
Cookie settingsACCEPTREJECT
Manage consent