Battle Chasers Nightwar is a crowdfunded game based on the comic of the same name. I doubt I’m alone in not knowing anything about the comic but apparently this was well respected. The game then has been created by the same person behind the comic and is a perfect jumping on point for the tale of Gully and her fellow adventurers.

Originating as it does from a comic there is a very strong narrative and visual style to Battle Chasers Nightwar. The story starts when you escape an exploding airship to land on a mysterious island which is oddly strong in a magic source called mana. The opening cutscene is told through detailed and well-crafted comic style art, a clear nod to the games origins. This art style carries forward through every aspect of the game, with some great character design and animation displayed throughout. 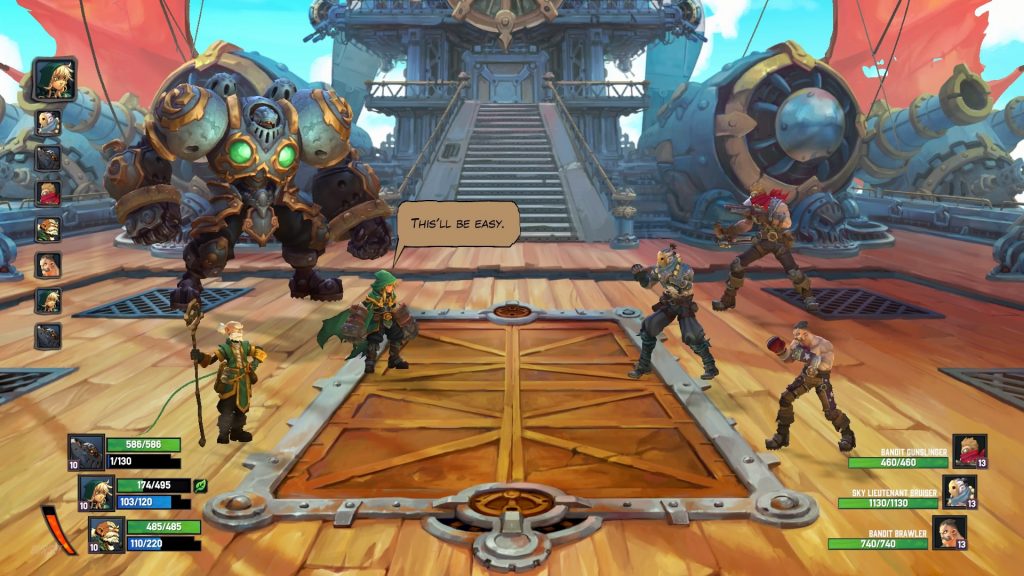 There isn’t an open world to explore as such and the overworld is represented as a map connected through a series of paths which spread out throughout the smallish world.  This isn’t on the same scale as the 100 hour AAA epic RPGs of the world. This world is split into sections, which are gated through the completion of dungeons and from end to end can be traversed in only a short time. The art design is great though with a hand drawn feel to the world and details such as the clouds and water really well represented.  Within this world is a central hub town where the usual RPG staples are all present, inn, blacksmith etc.

The main meat of the game comes from attempting the aforementioned dungeons and it is here where the perspective changes to an isometric view point. There are eight main dungeons to explore and whilst the location of these are set on the overworld, the actual layout of the dungeons is randomly generated. Once in each dungeon you’ll be exploring but mostly just getting into fights. In a nice step you can chose the difficulty of the dungeon before embarking on it, with the higher difficulties wielding more rewards.  These dungeons can also be completed again to gain more experience and this is where the random nature of them really helps longevity. 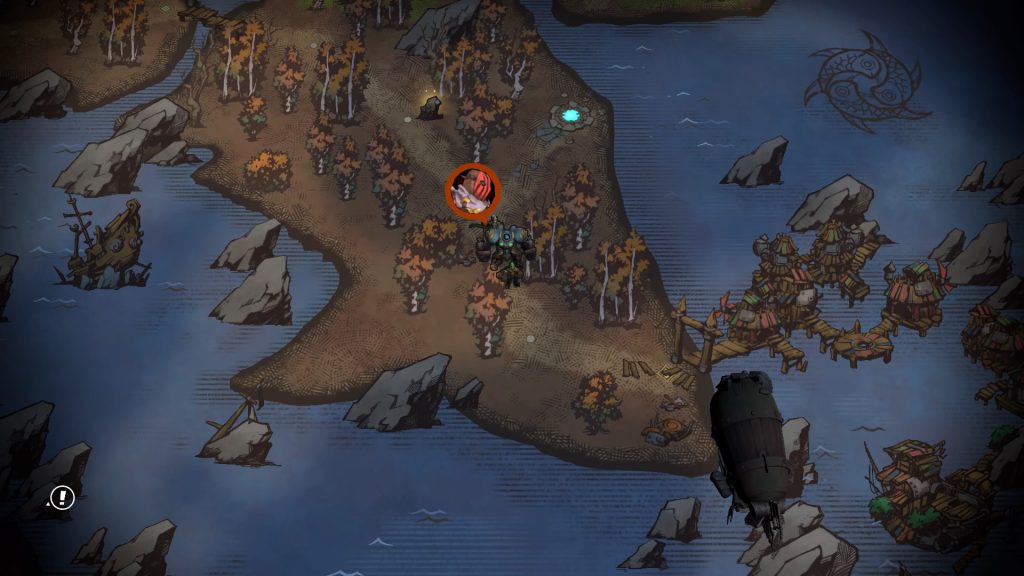 As a traditional style RPG combat is of the turn based variety, with your characters facing off against enemies and taking turns to hit each other.  Battle Chasers does something Interesting with magic attacks though as these aren’t strictly limited to your mana gauge.  Each normal attack not only damages the enemy but also fills up your own overdrive gauge. Overdrive works as a top-up to your existing mana pool and effectively allows for larger more audacious use of your magic abilities.   It means that even if you have totally run out of mana a couple of physical attacks will quickly put you in a position to use magic again.

It is a neat system and has been balanced really well, overdrive is only generated during battle and isn’t carried over between fights, meaning you’re pretty much always able to use your flashiest attacks if you plan correctly. The battles have a great rhythm to them and attacks feel weighty and powerful.  Normal attacks hit immediately and are generally weaker than magic attacks, but generate overdrive.  Magic attacks need to be queued up and can take a short while before they are finally launched, can hit multiple enemies, are often much stronger and use your mana or overdrive resource.  This balance between the two kinds of attacks is great and gives the combat some depth. The combat also has a heavy emphasis on both positive and negative status effects with the challenge coming from managing these and taking advantage of opportunities to exploit an enemy’s negative state. 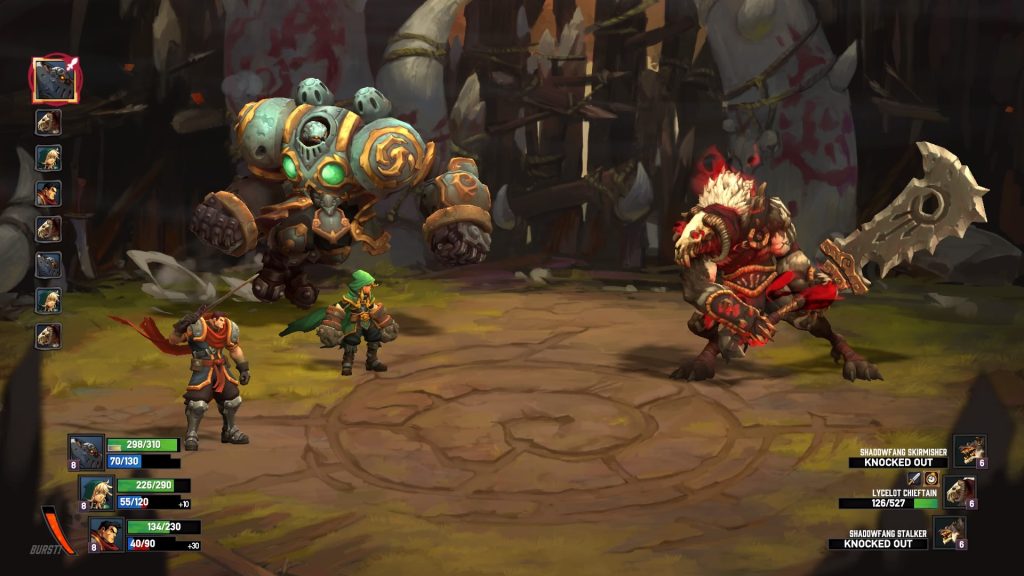 Coupled to the combat there is a range of further customisation options in the form of skills which can be unlocked.  These are passive bonuses to your characters, greater critical chance for example, and you allocate these in any variety you want.  Each skill has a set points value and the amount of points you can use increases slowly as you level up.  It is a welcome addition adding another level of customisation to the combat.

Aside from the fights there are a number of other distractions, from crafting items or potions through to beast slaying and fishing.  Each of these distractions are decently implemented if not massively deep but, there is more than enough there to get lost in if you so wish.  Spending time with each of these tasks will see decent rewards granted to your team and it is well worth checking some of them out. 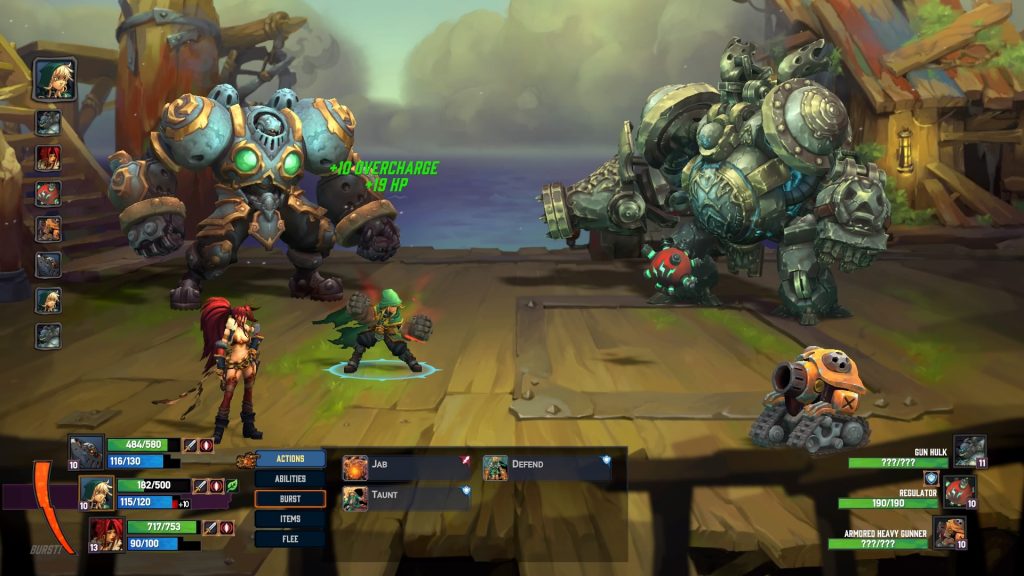 My main criticism with the Battle Chasers is an odd one and comes down to the fact it feels like too small a font was used for the text.  It’s not a massive issue by any measure, but the font is just small enough to make me strain ever so slightly to read it. I wouldn’t mention this at all if it wasn’t for the fact I relied on knowing what my attacks were going to do, which status effects they would inflict and how quick they would be to launch.  It’s not a massive thing and the text is readable, but for me was just a bit too small.

There are also some issue with pacing as about half way through when you’ve unlocked all the characters you need to level them up individually. You can only take three people in to a dungeon and only change your squad at the main town. Disappointingly however experience is only gained when your characters are active in battle. This can mean you can quickly out level your team mates left out of the squad and forces a little bit of grinding into the game.

Battle Chasers Nightwar is a great game. It has an excellent art style with some wonderfully detailed characters and environmental features. The combat is interesting and provides a different take on turn based battles. Whilst it isn’t a massive game there is more than enough to do with a variety of distractions along the way.  Overall this is a very easy game to recommend.

Battle Chasers Nightwar
8 Overall
Pros
+ Rewarding combat.
+ The replenishing magic gauge is a great addition.
+ Wonderful art style.
+ Lots of diversions outside of the dungeons.
Cons
- Not a massive overworld and not on the same scale as large 100 hour RPGs.
- Smallish text makes it tricky to read the details during battles.
- The fact characters don't level when not in your squad results in some mandatory grind.
Summary
Battle Chasers Nightwar is a great game. It has an excellent art style with some wonderfully detailed characters and environmental features. The combat is interesting and provides a different take on turn based battles. Whilst it isn't a massive game there is more than enough to do with a variety of distractions along the way. Overall this is a very easy game to recommend.