Ninja Shodown is the latest effort from Bitmap Bureau, the Southampton-based devs who brought us the enjoyable 88 Heroes.  Much like that game, Ninja Shodown is an arcade/action platformer of sorts with a better-than-retro aesthetic and it sees up to four ninjas tearing around single screen levels slashing their way through each other or enemy goons depending on the mode selected.

Following on from the game’s gloriously daft trailer, this is a game about frantic action with an emphasis on fun and silliness much like 88 Heroes, but while that was a very immediate and punchy game, this has even more focus on pick up and play gameplay. 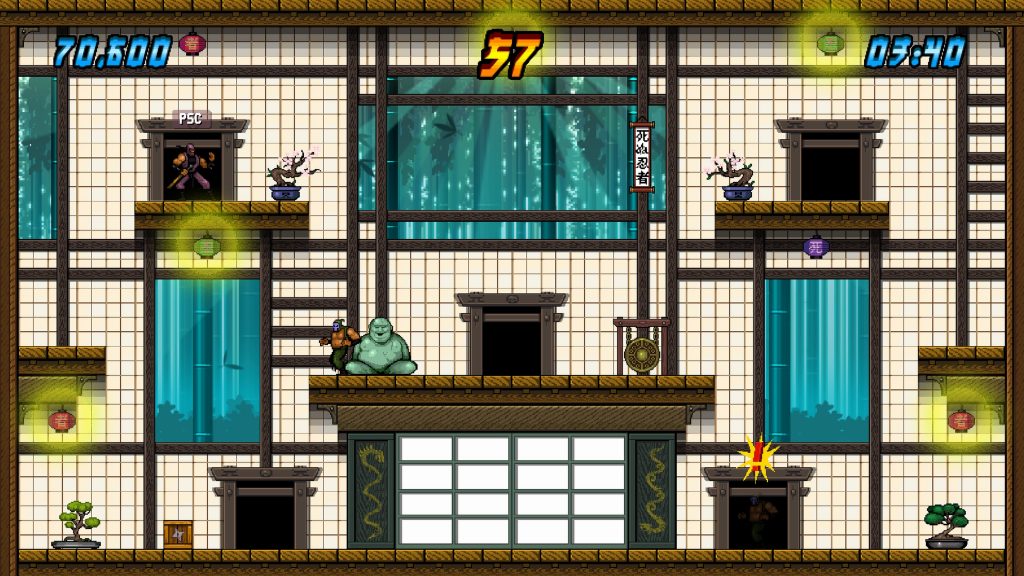 The game’s main mode is Arcade, and sees 1-4 ninjas trying to survive screen after screen full of enemy combatants.  Enemies appear in doorways and can be dispatched with swords, shurikens or special weapons that are found laying around the level.  A handy double-jump allows you to climb up the screen via platforms and a dodge move lets you evade oncoming enemies.  The core gameplay is sound but the special weapons are a mixed bag with a few of them being more of a liability than a help.

This mode has five screens per area and five areas to get through.  I think… I say that because, Ninja Shodown is HARD.  As soon as the game introduces armoured enemies (who appear from the third screen), all bets are off.  Sometimes they’ll die when you slash at them, sometimes you’ll die.  The trick is to get behind them but with so much happening on the screen, that’s easier said than done.  I’ve made it to the second area but there are no checkpoints and death comes all too easily.  I don’t feel too bad, according to PSN very few have made it to the third area either.  God knows what the end of game boss is going to be like as well. 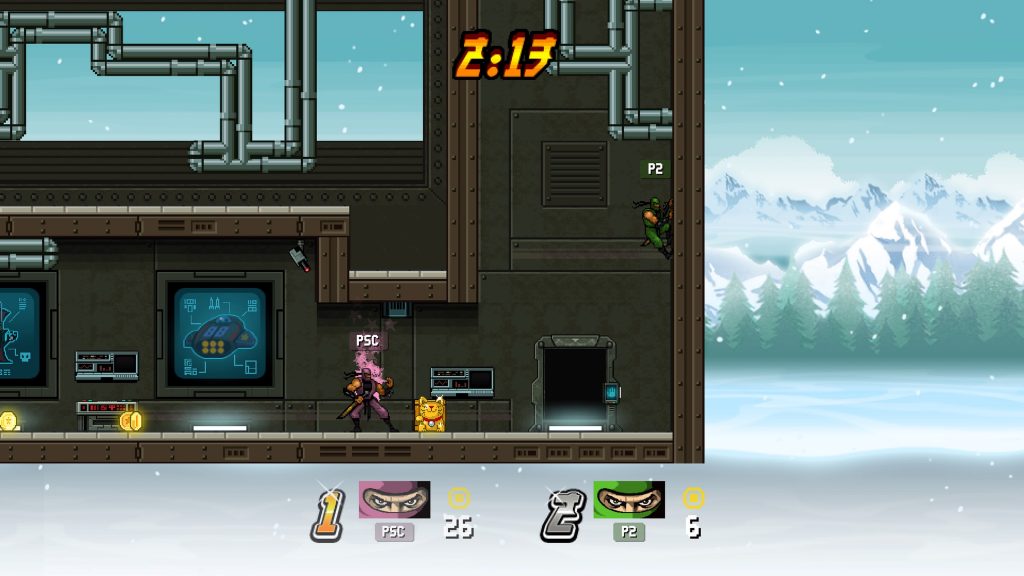 You can, and should, draft in extra ninjas but bear in mind this game supports local co-op only.  The ‘bringing back the golden age of couch co-op’ thing is getting a bit old now, as are we as gamers.  Your best mate down the street now lives miles away and is married with kids and when you do get people together in your house getting them to look past the established party games like Jackbox and Nidhogg is pretty tricky.  And in terms of more direct competition, Towerfall: Ascension will probably get more play than this.  So, online co-op would have been nice but we don’t blame Bitmap Bureau for skipping it as it’d no doubt be a wasteland.  Such is modern gaming.

If you can get friends involved, you’ll want to skip Arcade mode altogether anyway and focus on Versus which offers four ways to compete.  Yes, these all involve stabbing each other with last man standing, timed and crown (get points for keeping the crown or killing the guy with it) all being variations on the same theme.  Coin mode is the most fun.  Golden statues appear and release coins when smashed.  The winner is the ninja with the most coins at the end but coins can be dropped and stolen if you get killed which gives this mode a bit more of a risk versus reward feel. 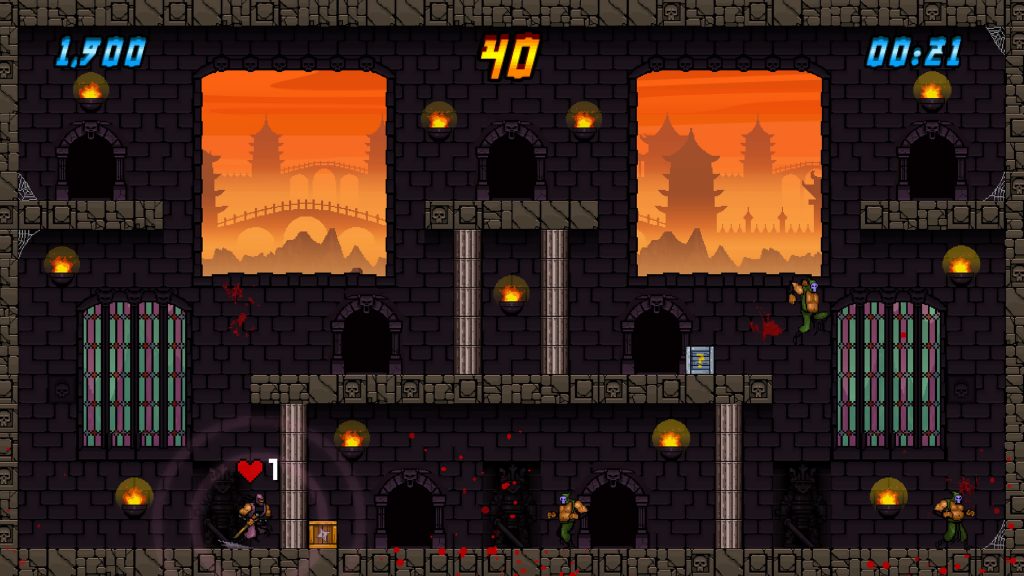 We enjoyed manicness of the game and the presentation which is old school but with a bit more detail than the usual pixely efforts but the difficult really is an issue and there’s not a whole lot of game here.  If the enemies were a bit more consistent in how they respond to attacks and if things were maybe a tad more restrained in Arcade mode, this would be pretty enjoyable but 88 Heroes gives you much more bang for your buck in terms of singleplayer content.  So much so that this games feels like it really could have been a multiplayer mode for that and with all those heroes to choose from, that could have been quite special.  But as it stands Ninja Shodown just isn’t as much fun as it thinks it is.

There is potential here though.  The graphics and controls are on point, the game just needs more content and some tweaking.  If they sort that out and it could be party favourite but in its current form, it’s just too difficult to recommend.

Ninja Shodown
5 Overall
Pros
+ Very immediate
+ Authentic retro presentation
+ Sharp controls
Cons
- Punishingly difficult
- Not much variation between modes
- Lacks content
- Is all a bit basic
Summary
Ninja Shodown is a party game with a sense of fun and chaos to it but the truth is that it's just not as much fun to play as it should be.