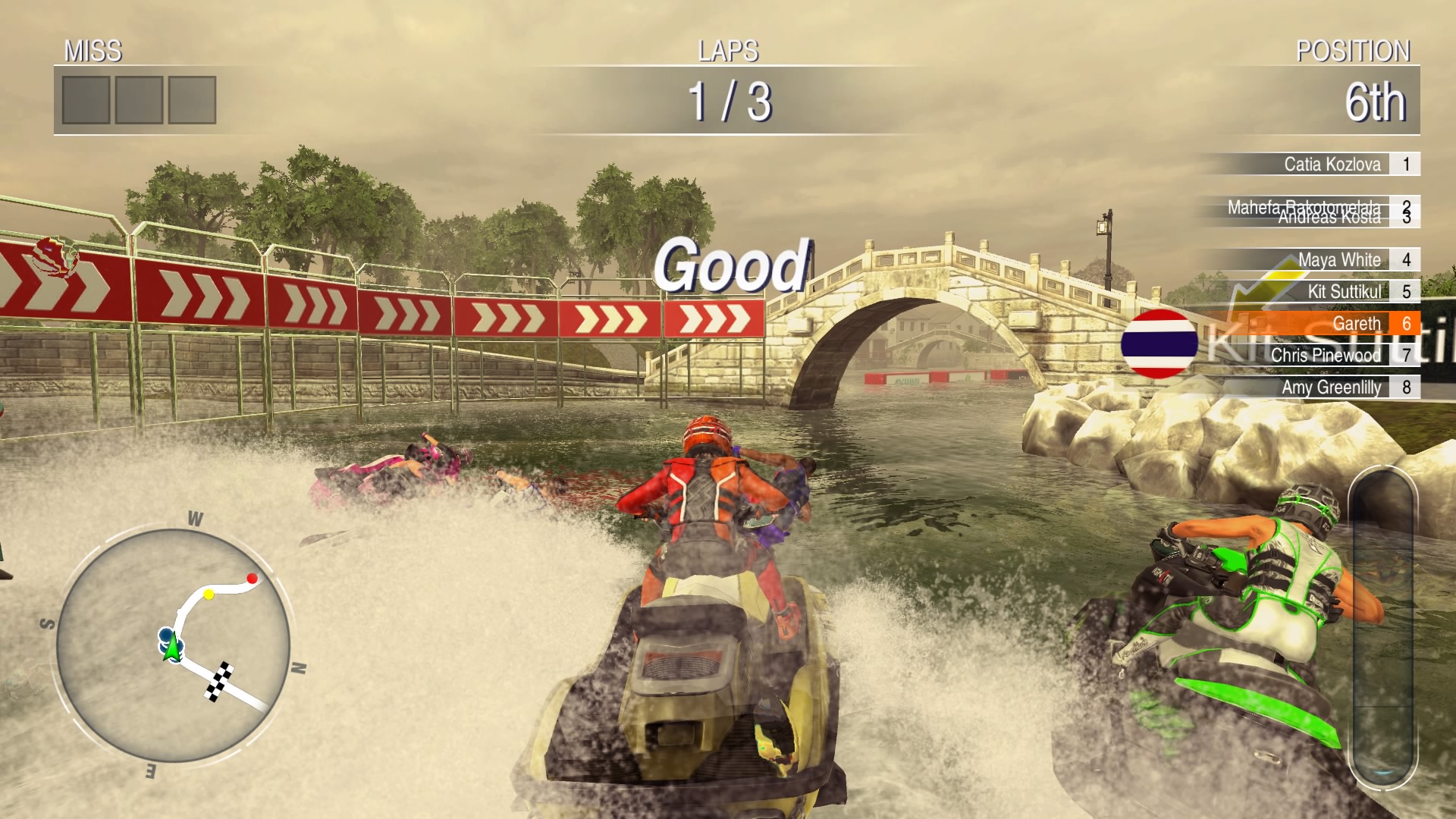 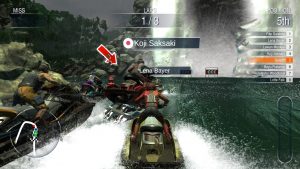 Aqua Moto Racing Utopia is a water based racing game from Zordix AB out now on the PS4. Its stunt and turbo based gameplay places it firmly in the arcade racer camp but does it rival the cabinets of old?

As you might be able to guess from the title and you definitely can tell from the images on this page this is a jet ski racer a la Wave Race 64. Not owning a Nintendo 64 I can’t comment on the quality comparison but I’m sure Zordix AB would love to be compared to something so fondly remembered. All I can comment on is my experience with this game.

Upon starting you are asked to create an avatar. You can be male or female, have a few different outfits and preset heads and hair cuts and you need to name them. This basic customisation is welcome although it ultimately makes no difference to the gameplay.

Then you are greeted with a menu with quite nice, calming, arcadey music and the sounds of waves lapping on the shore. It’s a strong start that does convey the older classics that the developer was aiming for. A quick tutorial teaches you the controls and the two main gameplay types and then you’re ready to race.

There are three types of championships to choose from and these will form the main part of the single player portion of the game. Two are racing based but have you riding different vehicles whilst the other is stunt based. Runabout and Ski are the two varieties with the main difference being the weight of the vehicle. The skis do feel more nimble and you tend to catch more air but the difference it makes to the racing is slim. You are limited to using a ski in Freestyle (stunt) mode.

There are six championships in both racing categories (only three in Freestyle) and all the championships take you on a tour of the different tracks. There are forty-five tracks overall, spread over ten locations which have different scenery and more importantly water conditions. Some have incredibly calm tropical waters whilst some take place in the middle of the ocean and have huge waves that bounce you all over the place. 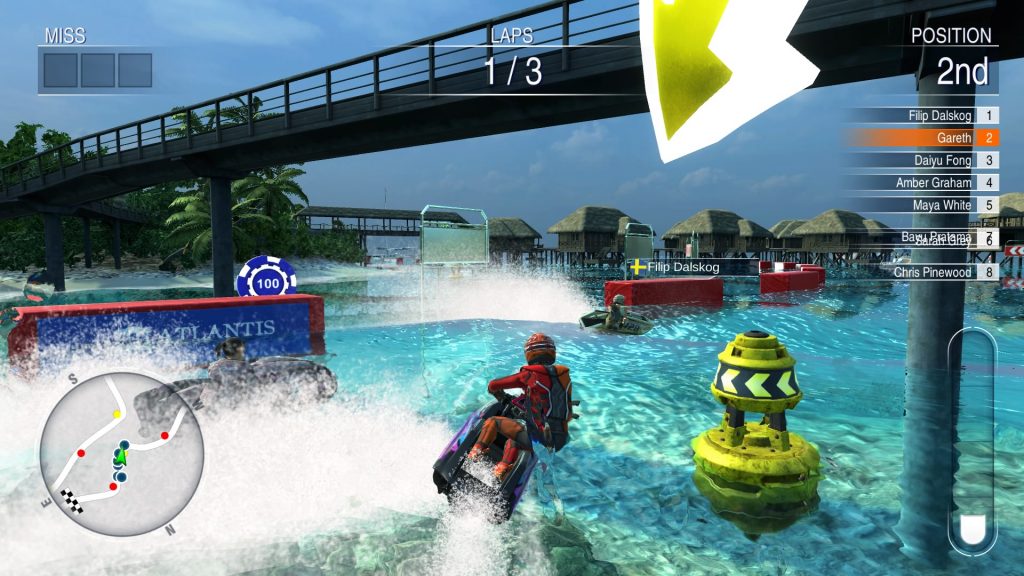 Championships range from three to five races in length and have you competing against seven other racers. Buoys are littered around each course, red ones you have to pass on the right, yellow ones on the left. If you fail to pass on the correct side three times then you are disqualified, but passing close to the buoys nets you some turbo. The closer you are the more you get, ranging from perfect, to great, to good. You can also gain turbo from doing stunts, both on the water and in the air with the aid of ramps that litter a lot of the courses.

You can’t boost unless you have a full meter and I actually found that hitting ramps was detrimental to my race so just stuck to getting as close to the buoys as possible. Although boosting does feel fast it doesn’t necessarily feel like it gains you much ground on the opposition. Perhaps they’re using boost at the same time, the game doesn’t do a good job of conveying that information. My tactic was to just race as well as I could and use boost on a straight when I had it, not to go out of my way for it.

There are credit chips littered around the course which net you extra cash to spend on new vehicles and sometimes there are items that fill your boosts completely but otherwise you just want to keep an eye on the mini-map so you know where to go (very few courses have boundaries drawing out the track) and try to get as close to the buoys as possible. There are shortcuts littered around the maps which again brings back memories or arcade racers of old.

Oh, and try not to get hit by other racers. More often than not if an AI plows into you then it’ll be to your detriment. Sometimes they will go flying off there ski but most of the time you will or they’ll simply push you out of the way whilst they stick to their racing line. It’s irritating but it’s something you adapt to as best you can.

Winning a race nets you twelve points in the championship and the points get lower the further back you finish as you’d expect. If you don’t do as well as you’d hoped then you can actually retry each individual race, so you can keep retrying until you get perfection if you choose which is nice but also hurts the replayability of the game as I was able to get gold on each championship first try this way. Finishing on the podium rewards you with a pot of money, again to spend on more vehicles. 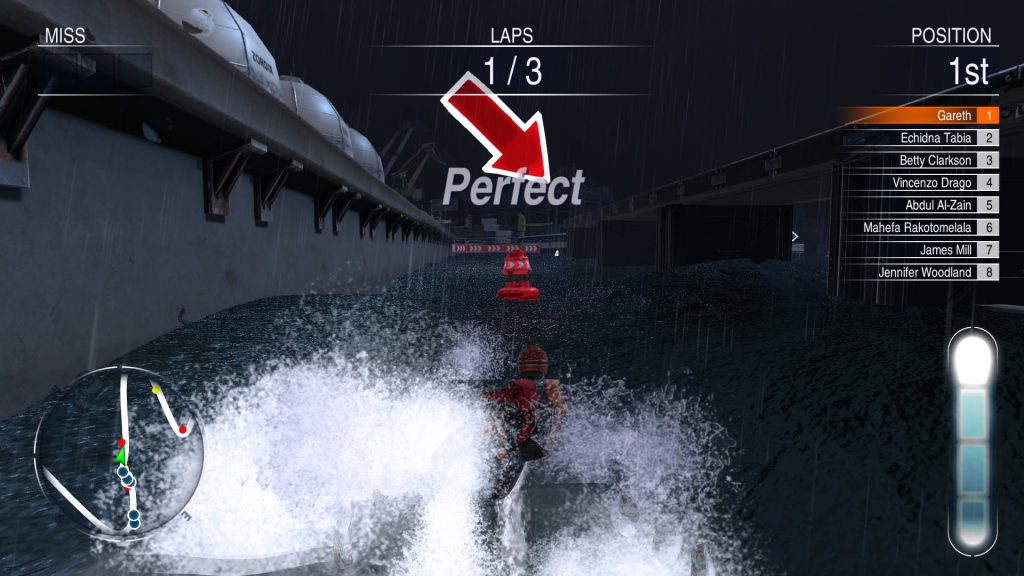 As you win races in championships your rider will level up which will grant you access to more championship courses. Winning gold was enough to unlock the next tier of race for me so it just stops you from jumping straight to the more powerful vehicles from the off. You’ll always be given one ride for that championship but can spend your hard earned cash to buy one with stats you prefer, whether you want more acceleration, top speed, handling, stunt ability or boost. There is a trophy for unlocking all the vehicles which will probably require some grinding but you’ll have plenty of money if you just pick and choose the vehicles you want.

Freestyle has you gaining points for doing tricks. You have a combo meter which goes to a maximum of 3x if you continue tricking and variety will net you more points than repeating the same tricks over and over. You’re competing with other racers again but this time they only exist as a score board on the right of the screen, they aren’t on the course with you. Once you’ve learned all the tricks (there are your basic cardinal directions but also a few slightly more complicated fighting move style combos) then you shouldn’t have too much trouble beating the AI.

Not until the last championship anyway which gets rid of the ramps and tasks you with doing tricks off waves. This was not fun at all as the waves were unpredictable and how your rider reacted to them didn’t feel consistent so you end up wiping by trying to do an air trick with too shallow a jump or lifting off the water whilst trying to do a water based trick and wiping that way. I also had the odd problem with a trick not activating the moment I did the command, delaying to the point where I had no chance not to crash.

It won’t take you too long to get through the championships thanks to the ability to replay each race until you win, but there are a few more modes. Leisure allows you to just ride around the different environments looking for collectibles. Once you’ve collected a specific amount something amusing generally happens (dolphins flying into the sky accompanied by a Hitchhikers Guide to the Galaxy quote for example) but that’s all there is to it.

There are time trials to try and get a gold on each track or stunt course which could keep you busy if that interests you. Beyond that there is online multiplayer but unsurprisingly it’s desolate, but if you have some couch buddies then there is four player split screen to race on or play some minigames like Hockey, Hold the Flag, King of the Hill or Duckling Mama.

And that’s your lot. Not bad for an arcade style racer but the price of £25 is very steep for the amount of content. The racing is fine it just feels a little safe. For an arcade racer I’d expect the skies to be bluer, the waves to have more of an impact and the stunts to be more extreme, but everything is a notch or two lower than I’d like making it feel a little tame. There are some tracks where shipping containers drop into the water or wildlife gets in the way and this could have been exploited far more making the races more hectic and the tracks more memorable. Unfortunately that’s not the case so it’s just a racer on water. 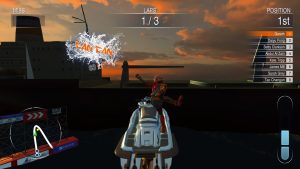 Aqua Moto Racing Utopia is a fun arcade style racer that will keep you busy for a little while if you’re a solo player but might find a slot in you multiplayer sessions if you bring your friends. It plays everything a little too safe and only hints at what it could have been if the developers had pushed things a little more. If you’re in the market for a water based arcade stunt racer then I’d wait for a sale. It’s not bad by any means, just could have been much better with a few tweaks.

Aqua Moto Racing Utopia
6 Overall
Pros
+ Nice environment variety + Arcadey feel + Retry ability is welcome
Cons
- Everything is a little tame - Lots of tracks but a lot are too similar - Stunts are sometimes delayed
Summary
Aqua Moto Racing Utopia is a decent arcade racer that with a little push could have been very memorable. As it is every element is a little too tame making it a lot harder to recommend.