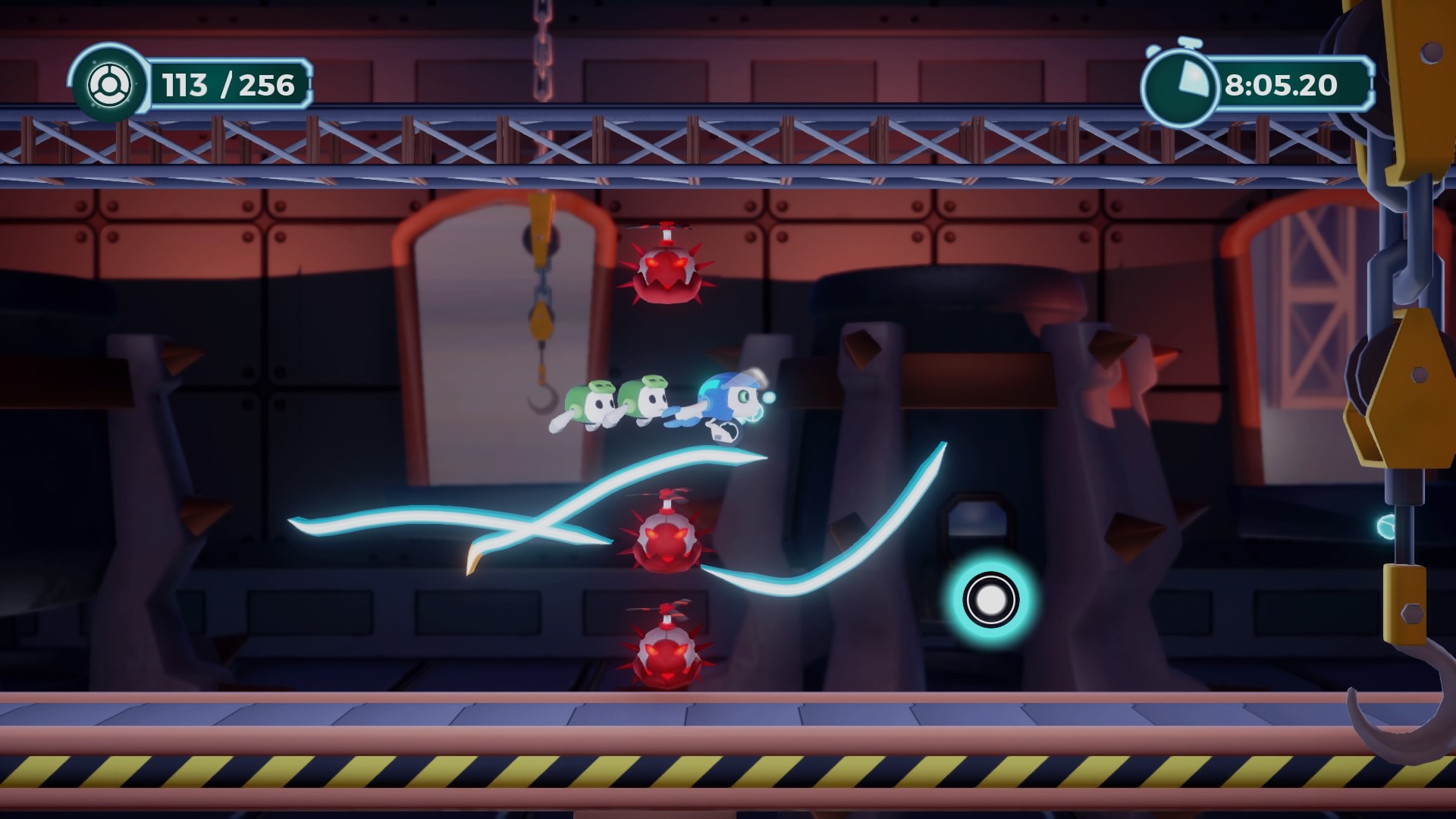 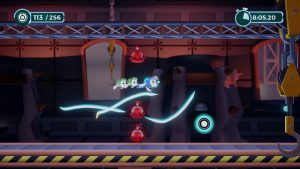 Rolling Bob appears to be a game aimed at the kids.  It is bright and colourful with characters that look like they’ve been ripped from a CGI kids show.  Notionally a mix of puzzle and platform genres the game sees you controlling Bob as he has to collect the BITS and avoid environmental hazards and death.  The big twist here is the way you use the DualShock 4’s gyroscope to draw platforms to help you on your way.  Is this a bold new way to play games or is it a gimmick destined to be forgotten?

The game starts off with a plot dump setting the scene for what is going to come next.  I was immediately turned off by the fact the story being told seems to be sub kids TV level of intelligence.  It was also delivered in a style which felt asinine and condescending, full of twee robots and saccharine sweet design.  This could be down to poor translation as there are examples in the menus of this.  Put it this way you certainly aren’t going to be coming here for a well written and engaging plot.

Bob is an interesting character to control being that he constantly rolls forward.  The triggers are used to either accelerate or bring Bob to a stop, pressing them both together will change the direction he’s travelling in.  This results in you having only sort of half control over Bob as you can’t jump or do anything other then go forward.  What you do have though is a cursor controlled through your gyroscope which can be used to draw platforms over obstacles.  It sort of reminded me of a bit of Back To Bed where you played as the dog and had to protect your master from falling into traps. 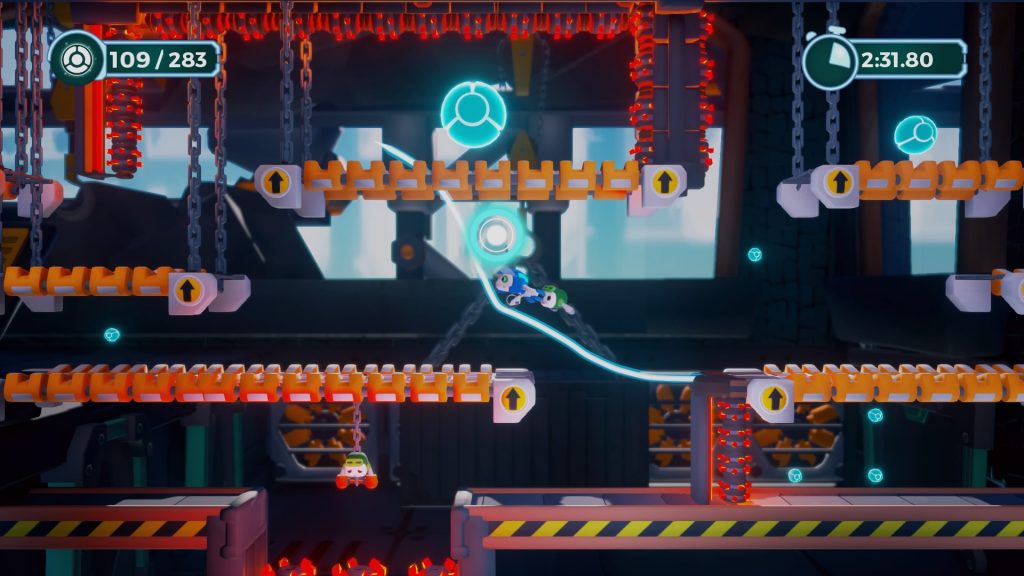 This is where the game falls apart as the gyroscope isn’t an effective way to play.  Throughout my time with Rolling Bob I was constantly fighting the controller when I was asked to draw a light bridge.  The cursor on screen would shake about and not move in quite direction I wanted it to move.  I could write off any kind of fine nuanced bridge building as everything I created ended up looking half baked and badly placed.  Add to this the need to react quickly and accurately in some instances and I was left just feeling hamstrung and frustrated by the poor control method.

Outside of the gyroscopic controls you do have some well designed levels with collectables scattered across the maps.  The aim is to collect all the glowing orbs and BITS, and the levels sort of work.  The levels reminded me very much of Kick & Fennick which was a game I enjoyed, however the frustrating controls really sap any enjoyment from Rolling Bob.

The thing with the gyroscope control is that it’s not designed for this kind of accuracy.  Also as a gyroscope you need to tilt the controller, something that is difficult to do if you play games sat down on a couch with the Dualshock 4 in your lap.  When one of the tutorial tips is to remind you to re-centre the cursor on the screen, and reminds you to do this often, you begin to feel the game is trying to do something with the DualShock 4 which it was never intended to do. 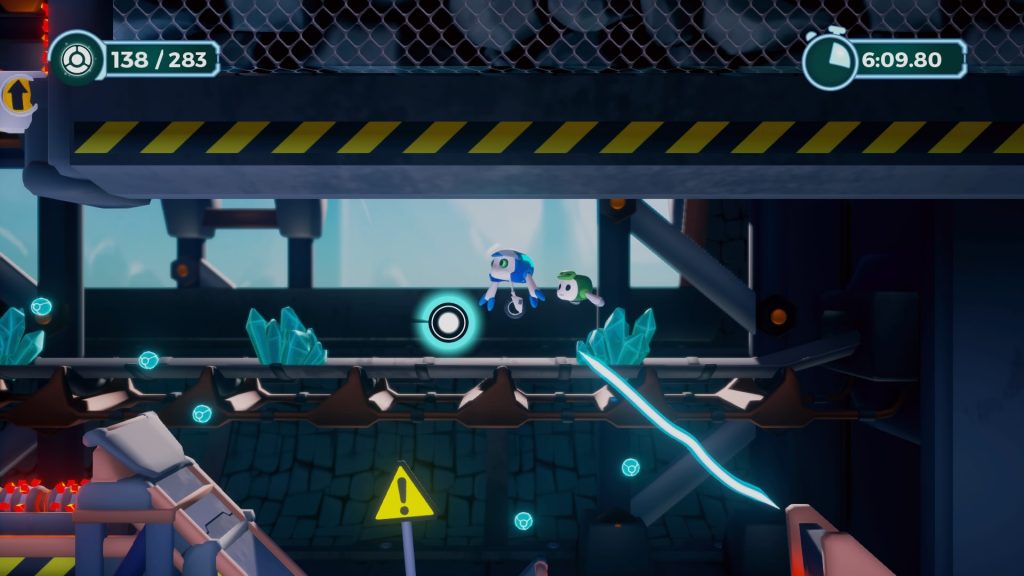 There are moments where the control scheme almost comes together although these are very few and far between.  What I mean by this is that Bob always remains centred on the screen and the cursor for your bridge building is naturally resting at his feet, after you’ve re-centred it.  In open sections if you press to build a bridge it will automatically go underneath Bob who will naturally roll onto the bridge.  You can use this technique to build a never ending bridge and Bob will continue to roll.  These sections feel fun, but come crashing down when you’re asked to navigate an obstacle and you end up hitting the brakes to faff around with the gyroscope trying to build a serviceable bridge for Bob to clamber over.  This makes for a game which has almost zero flow, and feels very stop start. 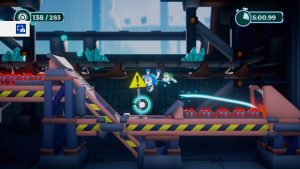 What we’re faced with here is a game with a control scheme which doesn’t work.  This saps all enjoyment from the game and makes it frustrating to play.  Instead of being fluid and fun it ends up being stilted and annoying.  Rolling Bob shows once more why gyroscopic controls are a bad idea.  It’s a shame really as underneath this poor control scheme is a passable 2D platform puzzle game.

The developer has released an update which promises lots of things, see below.  As such I decided to revisit to see if my review needs to be altered.

One of the key problems I had with the game was the control scheme, and the fact the Dualshock 4 wasn’t up for the task.  After playing it post patch I noticed no improvement here, for me the controls remain broken.

I also had issues with the translation in the game, and as is clear from the patch notes this hasn’t got any better. Improovement indeed.

Also I’m at a loss how the graphics have been made “better” as things still looked the same.

As for the performance in world three, whilst this may be slightly better while I was playing the game my PlayStation 4 sounded like it was about to take off, so I’m still unconvinced.

Overall then I noticed no real improvements here at least nothing to make me want to alter my score.

Rolling Bob
3 Overall
Pros
+ When the controls work it is passably enjoyable
Cons
- Gyroscopic controls just don’t work - Bland art design - Some instances of poor translation - Sub kids TV story
Summary
Rolling Bob's biggest selling point is the way it uses the gyroscope in the DualShock 4 to create a unique control method. Unfortunately this control method just doesn't work and actively frustrates the gameplay. Couple this with bland art style and some examples of badly translated text and you have a game which is best ignored.