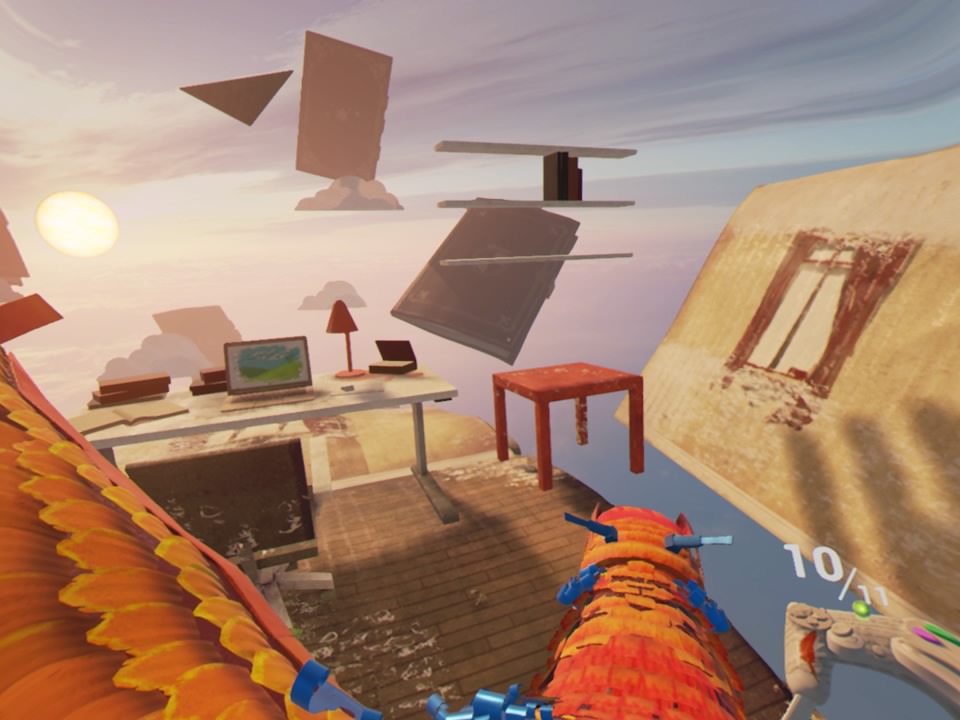 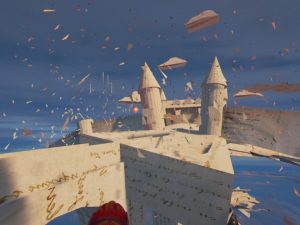 How We Soar is one of those games.  Just like half of the PSVR catalogue, 90% of indie games and 100% of walking simulators, this isn’t a game where the gameplay is the star.  The experience, if you want to call it that, is what is being highlighted here and knowing that, and lowering your gameplay expectations, is key to enjoying and appreciating what How We Soar has to offer.

The game starts you off with no exposition and no explanation.  You are sat on a phoenix that looks like a piñata and a virtual DualShock 4 acts as the handle for the reins (and tells you what the controls are).  From that point on the gameplay plays out on a very tight loop.  You fly around the game’s dozen or so levels, doing just a few things.  You’ll fly through rings, Pilotwings-style, and collect orbs (the DualShock’s face buttons act as counters for the orbs, with each one relating to a separate orb colour, so they aren’t exactly cramming gameplay elements into the control scheme here).  Get enough orbs and another phoenix will appear. 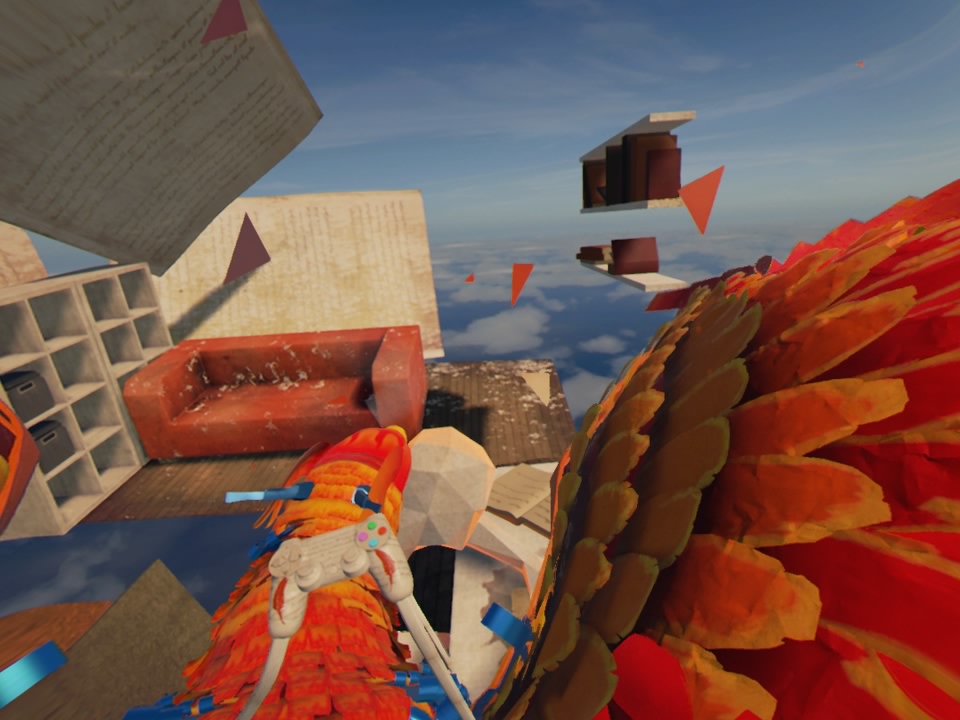 You then have to catch up to this creature and this is the only mildly taxing part of the game as you can lose distance on them by not keeping up with where they turn, and they aren’t much slower than you.  The trick to getting them is anticipation.  You’ll want to cut them off and when you do, you’ll absorb them (and their colour) which you can then release into the level by flying into what looks like a thermal column of paper.  Complete that task and a huge floating book will open, allowing you to travel to the next level.

None of this is massively engaging or difficult.  Sometimes you might feel a little lost in terms of where to go next but that seems to be common in a lot of VR games at the moment.  Aside from that this is a walk (flight) in the park (sky).  The game’s trophy set adds an added dimension by requiring you to fully explore each level but that’s about it from the gameplay here. 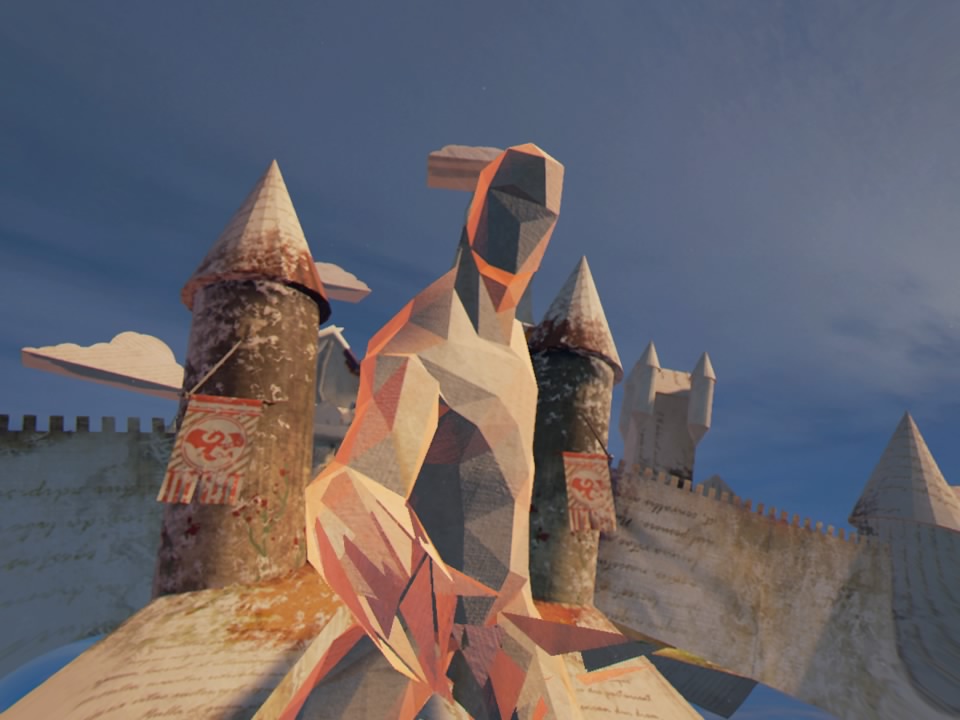 What sets How We Soar apart, and keeps it in the top half of our scoring system, is the setting.  The story is that you are a writer and the levels are essentially your imagination.  Each one starts out looking as if it was constructed out of used writing paper.  However, as you fly near to a surface, it will fill in with paint, and come to life (those aforementioned trophies are essentially for painting entire levels).  Each level is a paper construct in the sky and the feeling of soaring in and out of these structures is exactly why we bought a PSVR unit in the first place.

We could write something wanky and pretentious about the poetry of it all but fuck that.  What you need to know is that it looks good, with many of the levels offering up spectacular views.  Flying towards a dragon that is perched on a paper castle with the sun beaming out is just the antidote to all these space games we’re currently getting.  The actual quality of the graphics isn’t amazing, which is partly down to the technology itself, and the paper cut-out style does seem to have a dual purpose of fitting the narrative but also papering over the cracks.  The visuals can also clip and go a bit mental at times.  But while the graphics engine may not be working at optimal levels, the artistic choices more than make up for it.  As does the sound design which is excellent. 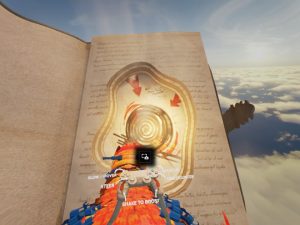 However, while the game itself is reasonably short (less than four hours), it can get a bit tedious.  It’s telling a short story in a particularly lengthy way (sure, four hours isn’t long for a game but it would be exhausting for a film) and the gameplay feels tacked on, an excuse to put a price tag and some trophies on the game in order to get it onto PSN.  But, if you dip in and out of this, How We Soar is a beautifully presented way to enjoy your PSVR.

How We Soar
6 Overall
Pros
+ Very different to the other PSVR titles + Art design is often spectacular + Perfect for VR
Cons
- Limited gameplay - Can get a bit tedious - Graphics can clip and distort at times
Summary
How We Soar doesn't score highly for gameplay but as a PSVR experience, it is one that owners of the hardware shouldn't miss out on.