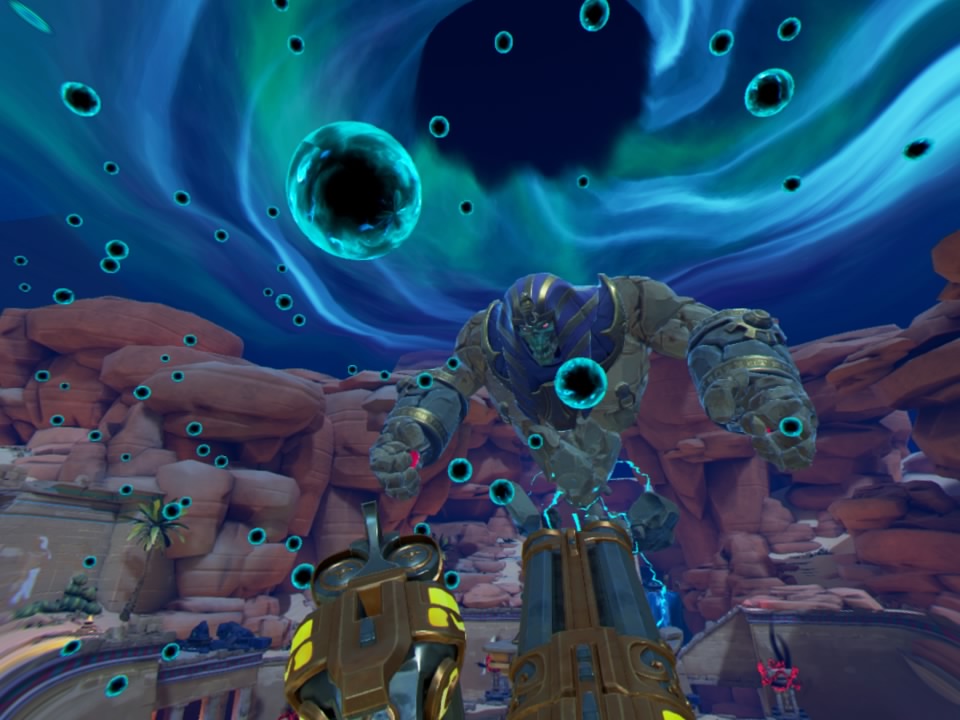 Ancient Amuletor is a new release for PlayStation VR and combines a couple of genres in the hope of shaking things up a little. Does it do enough to stand out from the VR crowd? Also, I’ll get this out there straight away – this is a Move controller only game, so if you don’t have two Move controllers don’t even consider purchasing it. 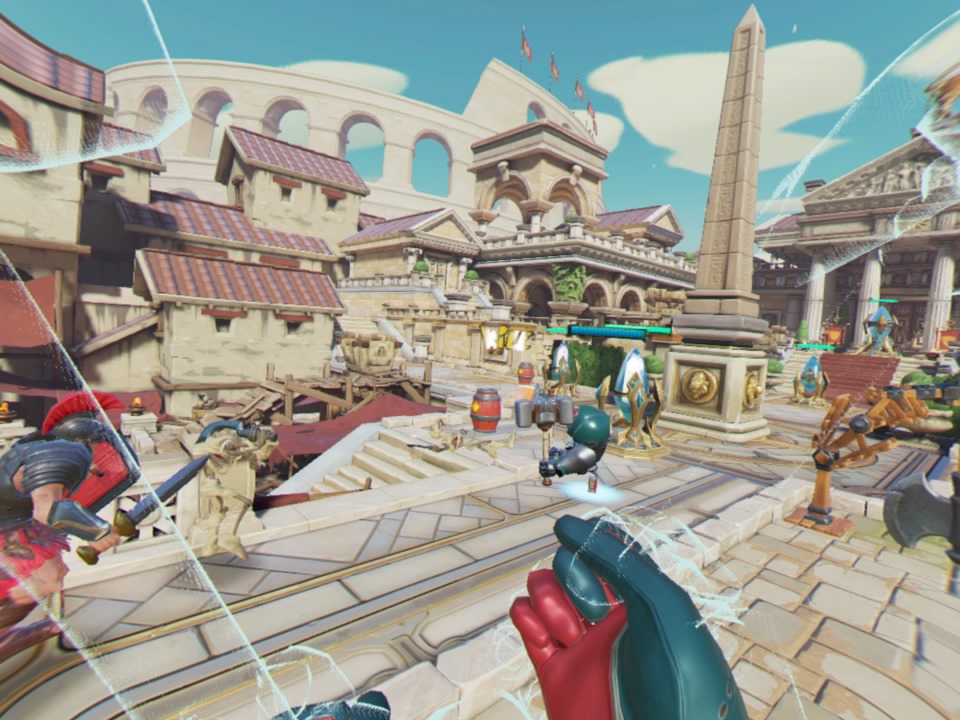 This is another of those arcadey experiences for VR. There’s no story or campaign, upon starting up you can choose a level to tackle and and then once you’ve done that you’re kicked back to the menu and can move onto the next one. You have three characters to choose from initially although a fourth is quickly unlocked. Each has their own strengths and weaknesses and you aren’t locked into your choice, you can switch character mid match to suit the situation.

You have the gunner who is the easiest to control as you dual wield what appear to be sawed off shotguns. Point at the things you want to die and pull the trigger. You get four shots before you need to reload which is accomplished by simply flicking the controller up. Being shotgunny things though the guns are best used at short range, with the spread of the bullets making hitting targets from a distance difficult, but not impossible.

Next is the archer. Here your left controller is the bow and you place the arrow with the right controller, pull the trigger and pull it back to take aim and then release to fire. Obviously it doesn’t fire as quickly but you can hit targets at a distance as long as your aim is good enough. It feels nice and landing an awkward shot makes you feel pretty bad-ass.

Third is the mage. You hold a spell book in your left hand and a wand in your right. Pressing the trigger in your left hand generates a spell which you must then grab with your right hand and fling at the enemy with a throwing motion. This has a splash damage effect which is good for taking out smaller groups of enemies, but generating a spell, grabbing it and then throwing it isn’t the fastest and getting an accurate throw can be difficult. There is some auto-aim which can be a blessing and curse as it aids you in hitting enemies but can sometimes track to the wrong target. 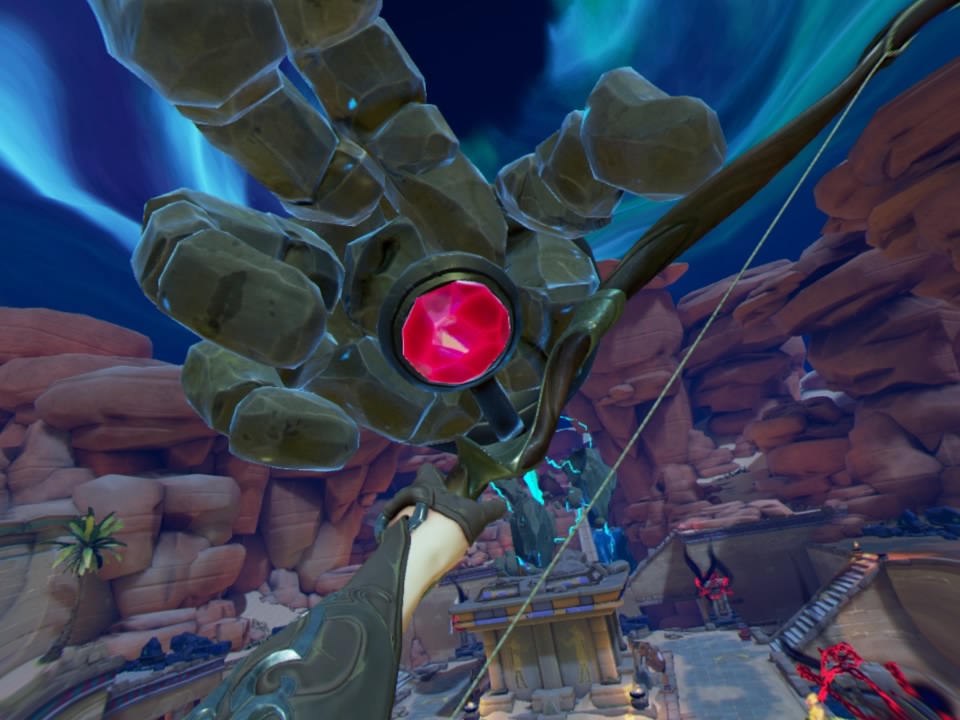 Lastly is the character you quickly unlock which is the puppeteer. You have a little robot in your left hand that you can throw anywhere on the field. From there he mimics your actions as you swing you arms about to take out enemies. He’s powerful and is good for guarding one particular area, but it takes time to move him from one spot to the next and if the puppet takes too much damage he becomes stunned and can be out of action for a while. Also playing as the puppeteer gave me Wii flashbacks as I flailed around with little care or accuracy.

Each character also has a special that builds. The gunner can fire non-stop for a brief time, the archer can tag enemies before firing off a shot that hits everyone, the mage can throw one shot that freezes enemies in place whilst the puppeteer has an attack that kills all around it.

You will face waves of enemies as they try and destroy crystals around the arena. The only crystal that truly matters is the large one at the end, but defending the smaller crystals too gets you a greater score. Basically it’s a tower defense game where you are the tower. Enemies will walk in set paths and stop to destroy any crystal they encounter along the way. To help you attack enemies around the map you can teleport to set locations which will give you a view on a specific part of the map. The controls are snappy for this and just require you to point and select where you want to go.

As the waves progress more enemies appear, with more variety, each causing a different problem. The mummies are the default enemy and simply walk up the crystal and hit it, the archers strike from afar and so don’t need to get so close to start attacking, bomb carriers are slow but have more health and do major damage if they manage to detonate on the crystal, mages can block certain warp points limiting your mobility and generate portals near crystals for enemies to pour out of and Romans carry shields which can block your attacks. 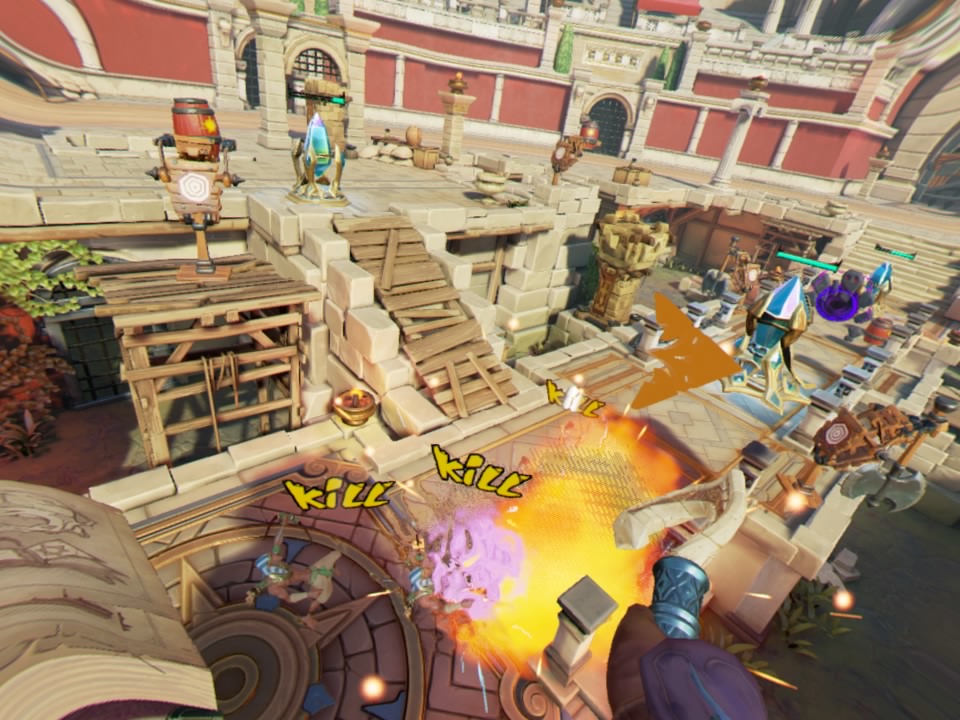 That might sound like an odd mix of characters but as the game is now there are two locations, Egypt and Rome. Each only has two levels, the second of which ends with a boss fight. That might not sound like a lot of content and, well, it’s not. Each level has three difficulty levels plus an endless mode that you can unlock by completing previous difficulties and you are ranked out of three stars upon completion of the level but that’s about it. There are a couple more levels with ‘Coming Soon’ written beneath them which seem to be based on samurai and Vikings, but when will they be released and will they be a free update or DLC?

There is a multiplayer mode which is up to three people but I was not able to get a game which is unfortunate as I believe this would really shine in a co-op setting. Even in single player if you look down you can see a full character model so looking across to a friend killing enemies would be very cool.

Visually things, although not technically incredible, are well designed and have a cartoonish look which is pleasing to the eye. Bosses, especially the first, are large and have attack patterns and weaknesses which vary the gameplay.

Although there is a real lack of content the game is fun to play and, at least with the gunner and archer, feels good to play too. That’s not to say it couldn’t be improved though. There is a training level to teach you the basic controls but it only lets you use the archer, a tutorial for each character wouldn’t hurt at all. An enemy count for how many are left in a wave and a boss health bar would also be appreciated just to give you more awareness about your progress. Oh and being able to pause in single player would be nice as well.

There are some interactive traps that you can use to your advantage but more destructibility in the environments would have made the locations feel more real and the enemies having more than one death animation or even rag doll would have made getting a head shot feel better. 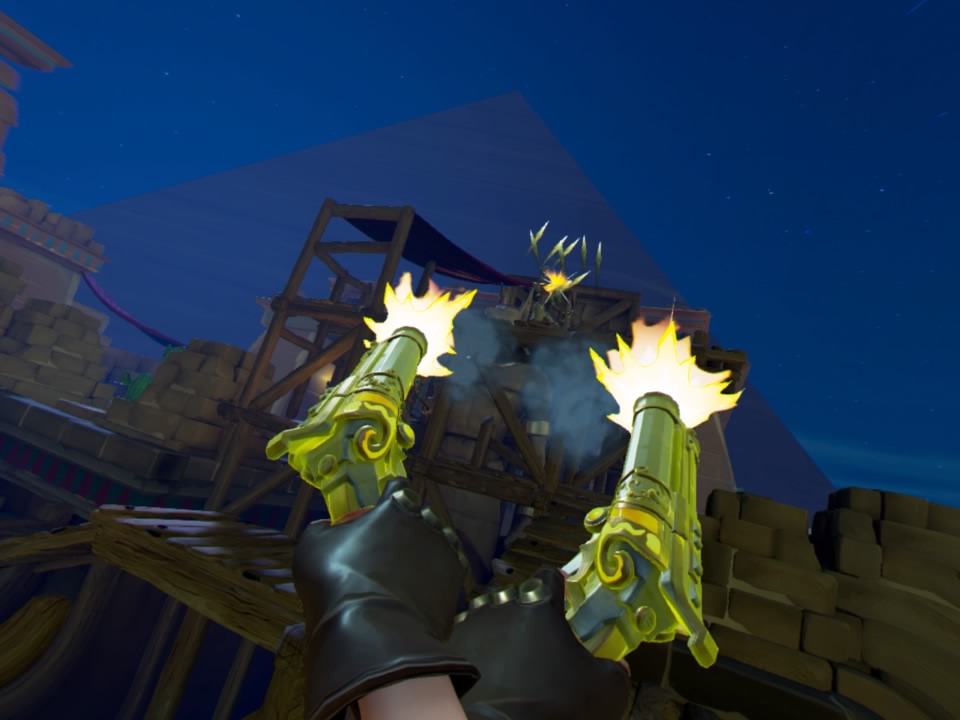 Overall though it is a well put together package that will hopefully be updated soon with more content for free. If not then I don’t think four levels is enough to warrant the price tag. If you can get a friend or two on board I’m sure it’ll provide some fun but otherwise you might struggle to get much longevity out of it.

Ancient Amuletor
5 Overall
Pros
+ A couple of characters are a lot of fun to use
+ Visuals are pleasingly well designed
+ Each character has a use
+ Three player co-op is good, in theory at least
Cons
- Only four levels
- Some characters are less fun than others
- Can be tiring
Summary
Ancient Amuletor is a fun VR shooter/tower defence hybrid. Unfortunately it's incredibly short on content and variety at only four levels. Online co-op could enhance the experience if you can find a game but in single player you'll see all the game has to offer in one session with only higher difficulty levels hoping to tempt you back in.