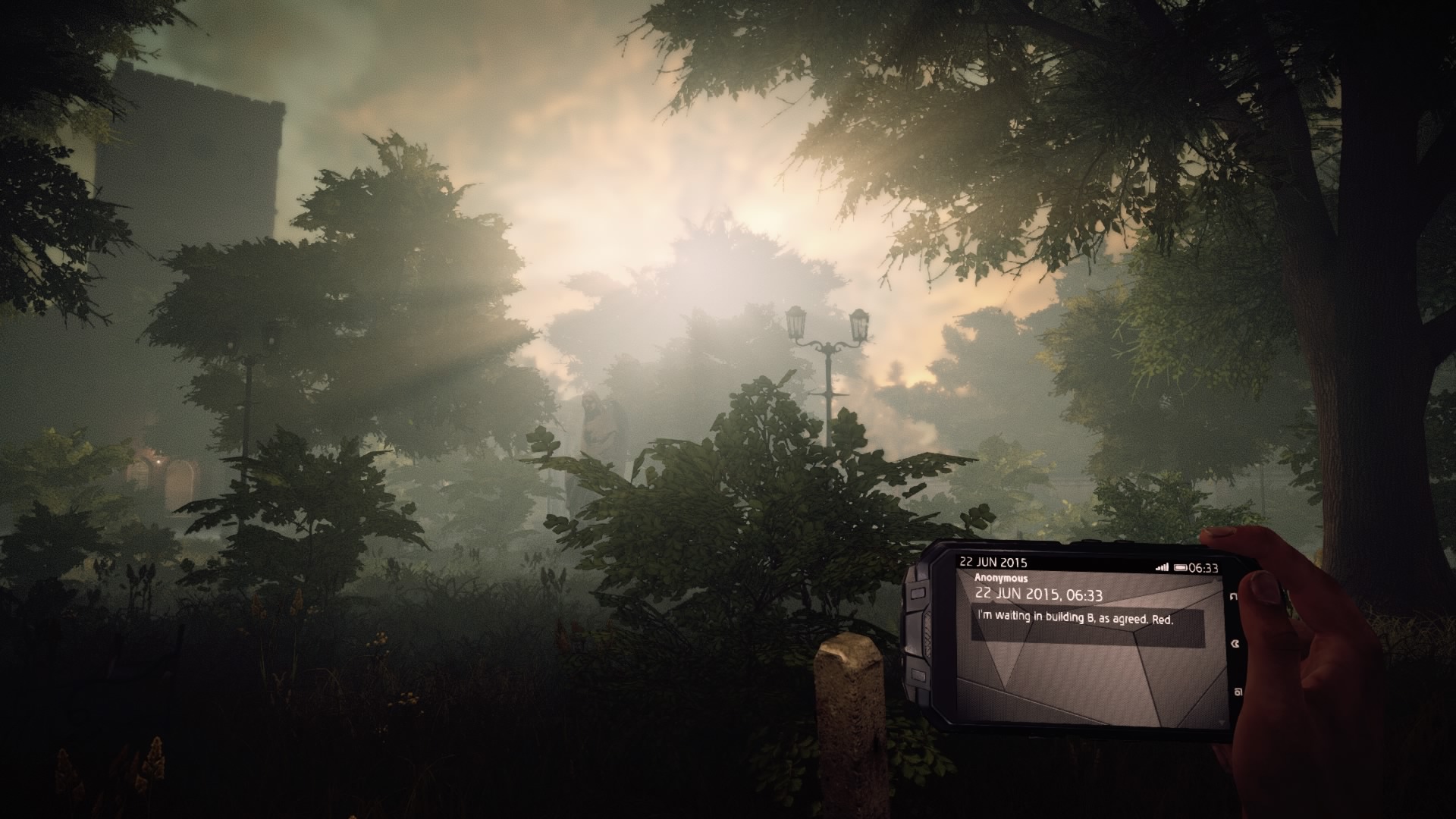 Judging this game solely on it’s cover, I was expecting Get Even to be a ballsy revenge shooter. Luckily, there’s more substance to it from a studio that does tend to stray into shooting territory with supernatural elements. Coming from Polish developers The Farm 51, Get Even looks to tell a stylish, twisting narrative whilst delivering the gunplay they’ve become accustomed to. Is it the right mix?

The story opens intriguingly enough with our protagonist Cole Black being tasked with saving a damsel in distress. Unfortunately, the prologue resolves with both being hit by an explosive which renders Cole unconscious and the girl seemingly expired. You awaken in an asylum with a mysterious Red guiding you from the shadows. From there, the story looks like pick up the hows and whys of the kidnapping. Both Black and Red are after answers and, as a captive, all you can do is play along. You do this by collecting as much evidence as you can before reviewing it all and deciding on a timeline of events. Again, phone apps play a part in solving puzzles and pointing you in the right direction towards new clues. Some see limited use but the ones relating to vision get plenty of application. 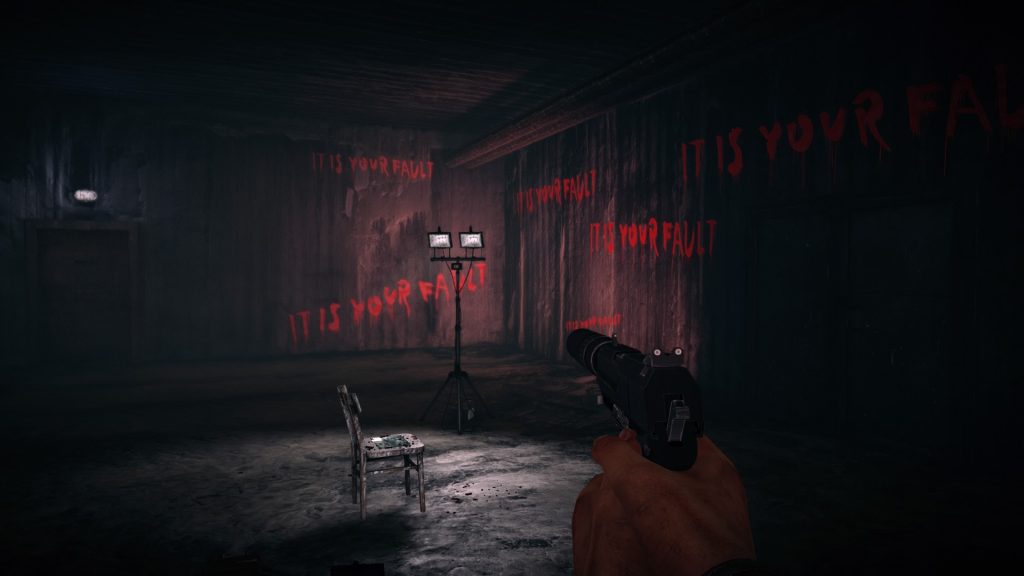 The main cast are represented well with some solid voice work. Cole’s thick Yorkshire gruffness seems a touch overbearing but the supporting cast measure things nicely. There’s a lot to cover with the story being told in news articles, email and written correspondence and cutscenes. There’s the potential to be swamped by it and you’re encouraged to find all the clues with new weaponry. I just found what I could on my playthrough and the conclusion didn’t make me feel lost or missing something crucial.

Choice plays a factor for some of the more peripheral characters. Sealing their fates doesn’t necessarily give the tale a huge branching task but there’s snippets of information you’d not get otherwise. Whilst Red is your guiding hand, he does offer the occasional recap, particularly as you head towards the climax. The unease between the two is fun to see play out and it’s clear it’s a cast full of secrets and revelations.

Gunplay is fairly serviceable. You definitely feel like a trained mercenary as you line up headshots and take enemies down. You will go down in a few shots but recharging health does give you the impetus to find cover. Cover which can be toggled back into existence by a handy phone app. It’s a contrivance that at least gives combat a more tactical element. You also have thermal vision which gives you a decent layout of the surroundings and, thanks to some early corporate espionage, a gun that shoots around corners. It’s a gimmick I never took advantage of beyond the tutorial. Given how intense the later shootouts become, it can become quite an asset. I certainly get the impression the adventure aspects are given the sharpest focus. It’s not that the combat is an afterthought. It’s thematically appropriate to Cole’s line of work and there’s enough going on mechanically to imply some genuine effort going into it. 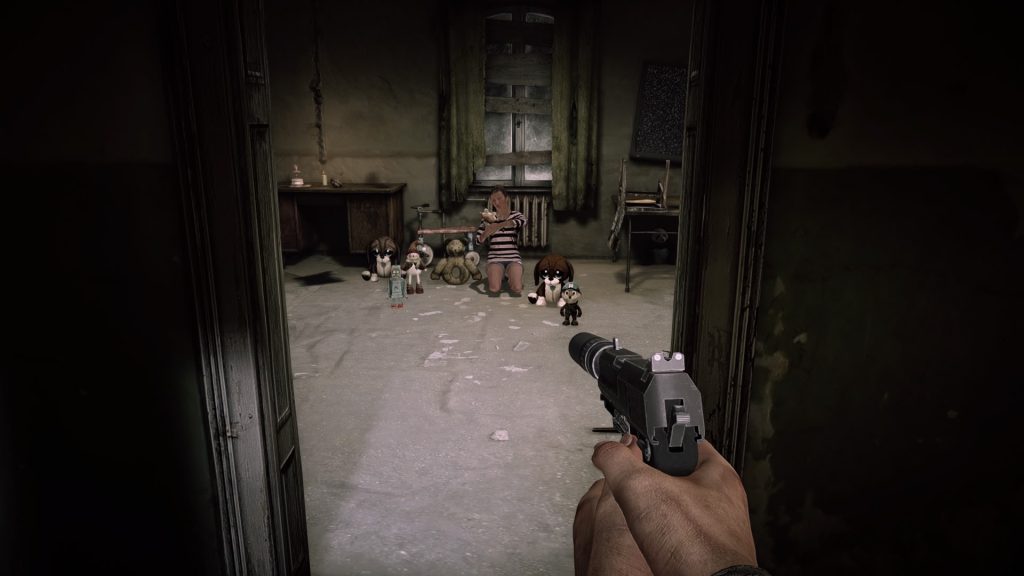 You’re given a narrative reason to focus on stealth and, whilst it’s perfectly doable to sneak through tight spots, I don’t feel you’ve got the tools at your disposal to distract create openings for yourself. It does gain more intricacies in the closing act but I found some of the shooting sections to be a little superfluous. There’s not a lot of them and, when they do arrive, they increase in difficulty. It can lead to scenarios where you’re outnumbered.

Visually, this game could be sharper. Objects will pop into existence when outdoors and the greenery looks a little lifeless and jagged. It’s rough in spots but there’s some stellar lighting effects that come into play within dimly lit rooms and corridors. The tighter locales offer the chance for more detail and fidelity. There’s plenty of abandoned, indoor areas but Farm 51 have taken ample opportunity to land Cole in surreal mindscapes. The change in perspective is greatly appreciated with some shifting geometry offering a chance to show new parts or add new context to the story whilst taking a break from reality. The soundtrack plays a big part too. It’s mostly sombre violin pieces but they strike an appropriate tone for a story that lands on some rather bleak notes. 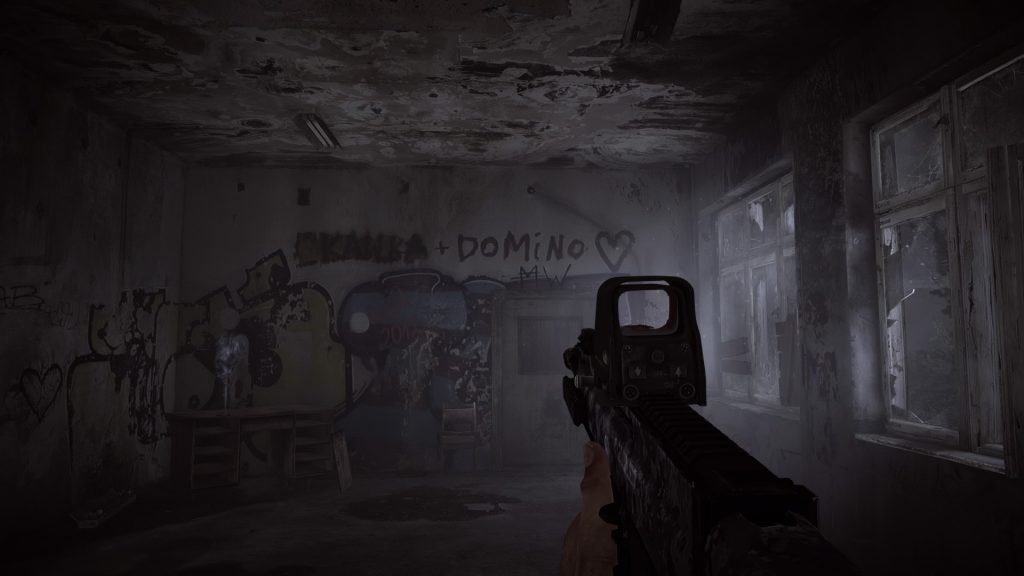 With its presentation and storytelling, Get Even is trying to deliver a lot of narrative in a nine hour spell. A simple tale of redemption and revenge quickly develops into a complex weave of betrayal with characters motivations being laid bare, obstructed and laid bare again. I may have done this game a disservice by trying to marathon the final third. It did tire me when the home stretch appeared to be anything but. However, I was pulled back in. There are surprises along the way which don’t feel contrived or convenient.

What I take away from Get Even is an ambitious story that limps towards the finish. There’s plenty of visual flourish with some experimental mechanics on display. Unfortunately, the pacing saw me lose patience towards the end. The effort is great, the execution feels a touch laboured.  Your patience is rewarded by a revealing closing salvo, but it takes a while to get there.

Get Even
7 Overall
Pros
+ Has a weighty, twisting narrative.
+ Good voicework that enhances a decent cast of characters.
+ Does show real moments of visual flourish.
+ An appropriately sombre soundtrack.
Cons
- Outdoor areas show a lot of rough edges.
- Gunplay is serviceable but bland.
- The story could've been paced tighter.
Summary
Whilst the story is compelling with plenty of facets to dig into, the pacing and combat felt a little tiresome. Great characters and presentation become mired in an experience that could've been tighter. Get Even is worth a look for a strong, narrative adventure with some interesting hooks, if you can stomach the uneven pacing.

One thought on “Get Even – PS4 Review”