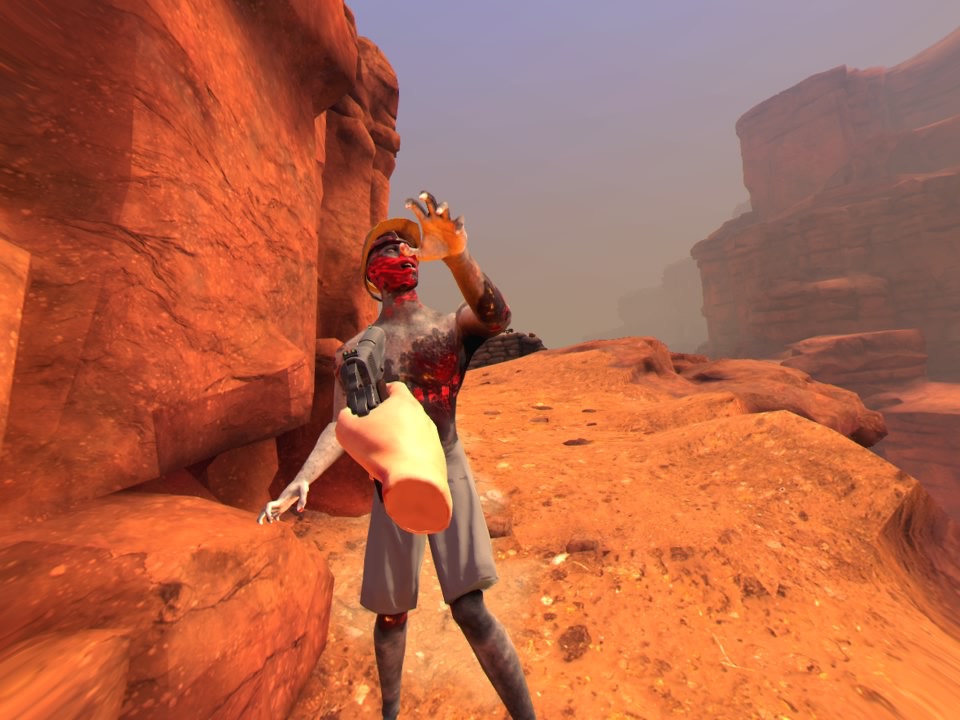 PlayStation VR owners will have been happy to see Arizona Sunshine hitting the store as it offers a full campaign and somewhat unrestricted movement rather than just being another turret/on-rail shooter.  Personally, we’re just as happy to see blue skies and linear level design because we’re old school like that.  Arizona Sunshine delivers on all of this but does also come with a few issues too.

The game is set right in the middle of the zombie apocalypse and sees you playing as an unnamed protagonist leaving his camp after being woken up by a zombie being decapitated by one of his traps.  From this point on, you make your way through the rocky, sun-bleached terrain of Arizona in the hope of finding something of a better life for yourself. 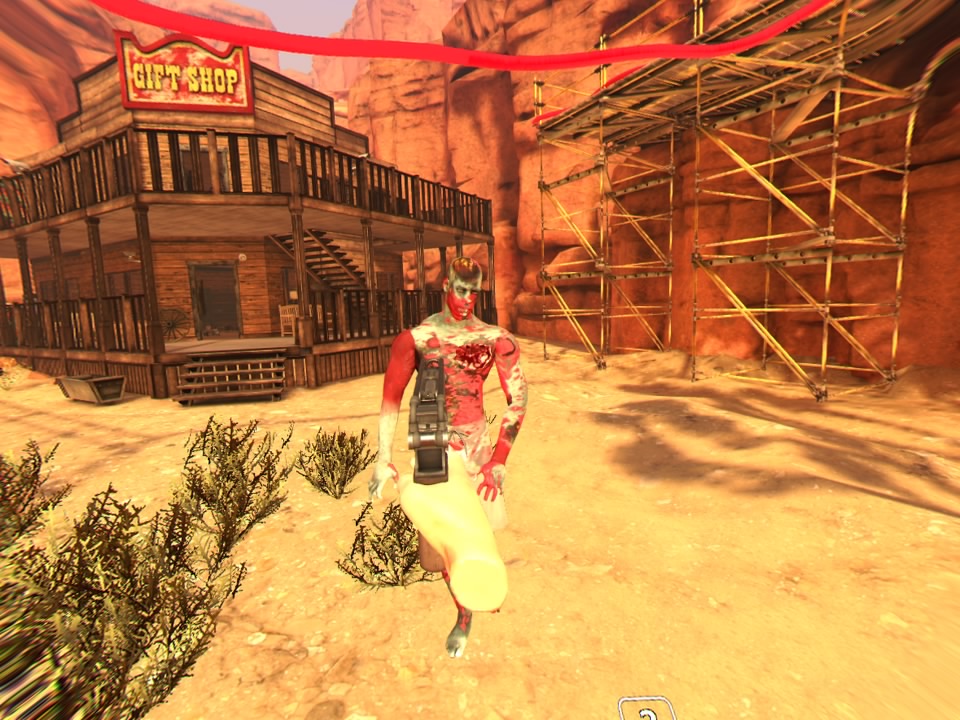 Along the way you’ve got two real problems.  The first is an almost classical lack of ammo.  You need to make your shots count and that means going for the head because popping a zombie skull like a watermelon will only take one well-placed shot where as taking off lumps of flesh and limbs from the body will take a lot more before the undead prick in front of you dies (again).  The other problem is, of course, the zombies.  These are pitched somewhere between the slow shamble of a Dead Rising type and the Usain Bolt-but-dead Left 4 Dead type.  They won’t run at you (at least not very often) but they will climb obstacles to get at you and, in large numbers, can cause you real problems.

The gameplay is generally boiled down to ‘get from point A to B’ and ‘find the switch’ and is set in a similar level of linearity to something like Resident Evil 4 in that the path ahead is usually pretty linear but there are some small open areas to explore occasionally.  It’s never as clever as Resi 4 though and that is really the crux of Arizona Sunshine’s issues.  You see, without the VR gimmick, this is really the sort of game you’d have expected to see on the PC fifteen years ago.  The level design and gameplay is quite basic and the visuals are dated (even on a PS Pro).  Compared to something like last gen’s Dead Island (a similarly sun-baked zombie-’em-up), this is extremely basic in all areas. 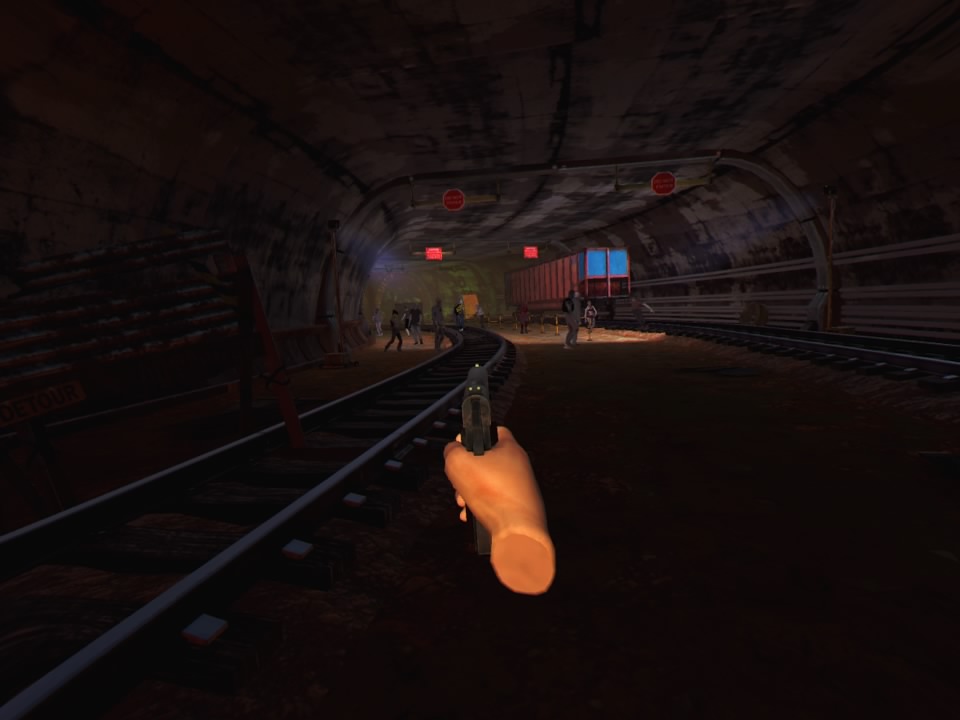 Add to that some fairly tricky controls (the game offers Aim, Move and DualShock control schemes but these all take a degree of getting used to, rather than the pick up and play brilliance of Until Dawn: Rush of Blood) and a rather empty world that has a lot of little objects in it, but none that you can use in any real way, and first impressions of this game are poor.  Of course, the VR functionality adds something to it all but it does all feel like another poor game elevated by the headset.

However, having completed the game in one sitting, it grew on me somewhat.  My favourite moments were where the game suddenly throws a lot more zombies at you.  Having to pick zombies off with headshots (because ammo is limited) feels tense and rewarding and when you’re down to your last few clips and there are zombies crawling towards you while others are rushing to claw your face off, it all gets the adrenaline flowing. 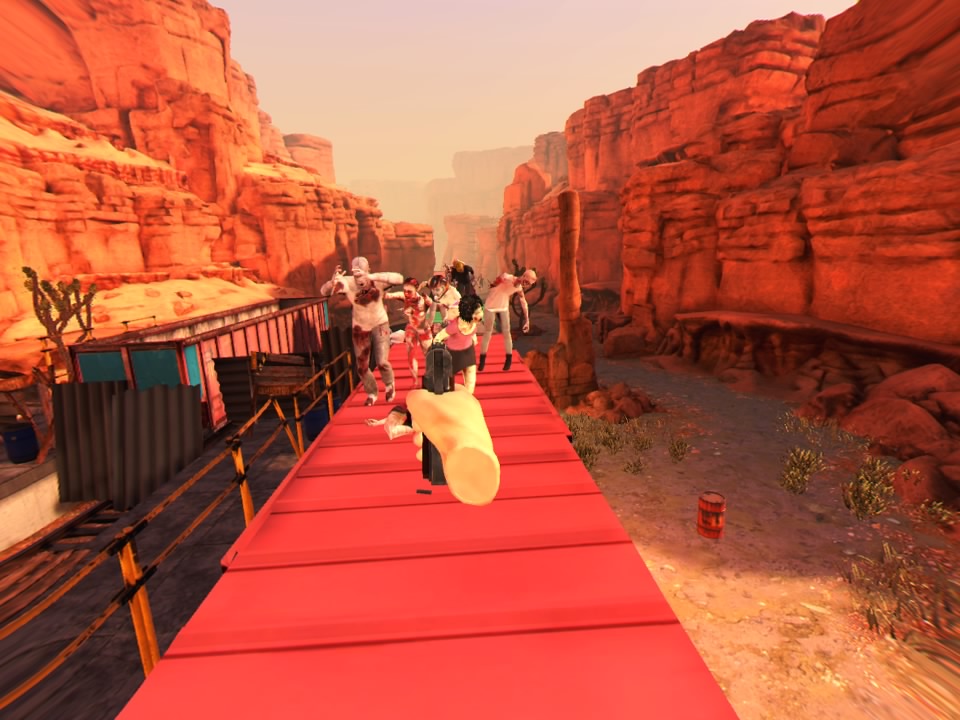 As the game progressed, I found my shooting improving as well.  You really have to line up your sights to get those headshots and it feels good to pull these off.  The Move controls ended up being too complicated for my tastes and so I switched back to the DualShock, which made things a bit easier for me.  I also switched from teleportation to smooth movement which took some getting used to but I didn’t find the motion sickness ever kicked in.  It apparently works very well with the Aim controller but good luck finding one of those for sale.

The campaign can be played in online co-op with one other player and there is also a horde mode (for up to four players).  These are welcome options that add a little bit more to the package which is a little bit light considering the £32 asking price. 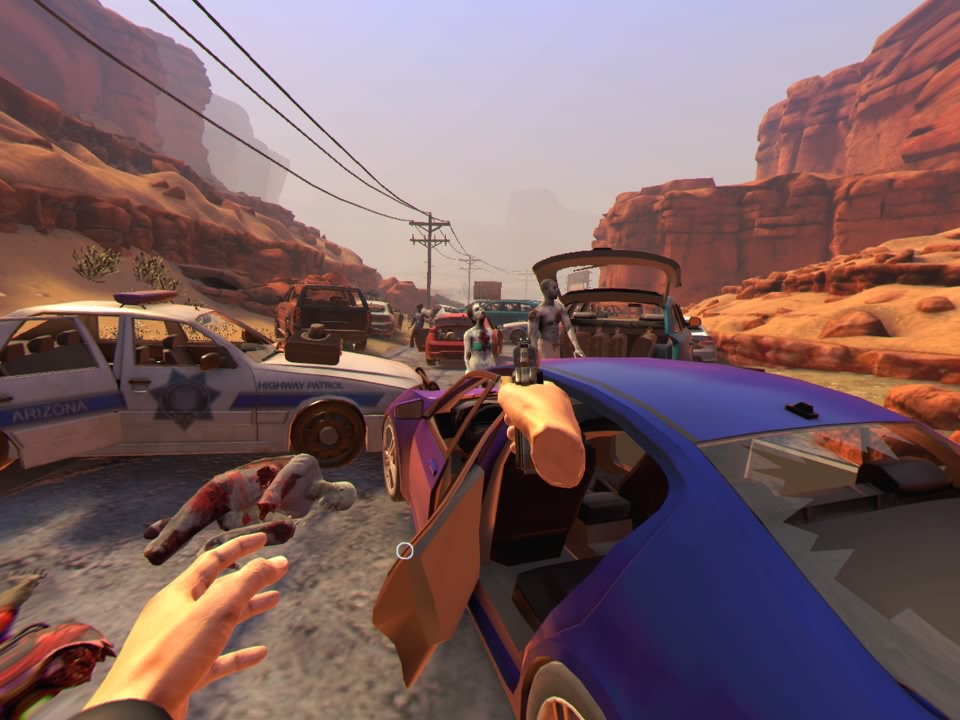 After a very rocky start, I ended up enjoying Arizona Sunshine a lot more than I expected to.  The linear nature of it, sunny vistas and cheesey monologues from the protagonist all work to its advantage and while there are better shooters for PSVR out there (I still rate Rush of Blood as the most exciting and The London Heist as the most precise) this has some value.

Without VR, this would be a fairly forgettable game and the VR doesn’t really add a whole lot anyway apart from the sniping sections (which at the very least suggest that a convincing port of Silent Scope would be very possible) and a sense of panic when the horde gets within biting range.  Overall though, this is a good option for PSVR owners looking for some old-school zombie killing action.

Arizona Sunshine
6 Overall
Pros
+ Good set piece battles
+ A good range of control schemes
+ Decent sense of humour
+ Five hour campaign time is just about right
+ Online co-op
Cons
- Weak graphics
- Controls take quite a lot of getting used to
- Might be too linear for some (shut up, linear is good)
- Expensive
Summary
Arizona Sunshine offers an enjoyable slice of zombie shooting action that left us relatively satisfied. The basic gameplay and dated graphics make the price tag sting a little though.