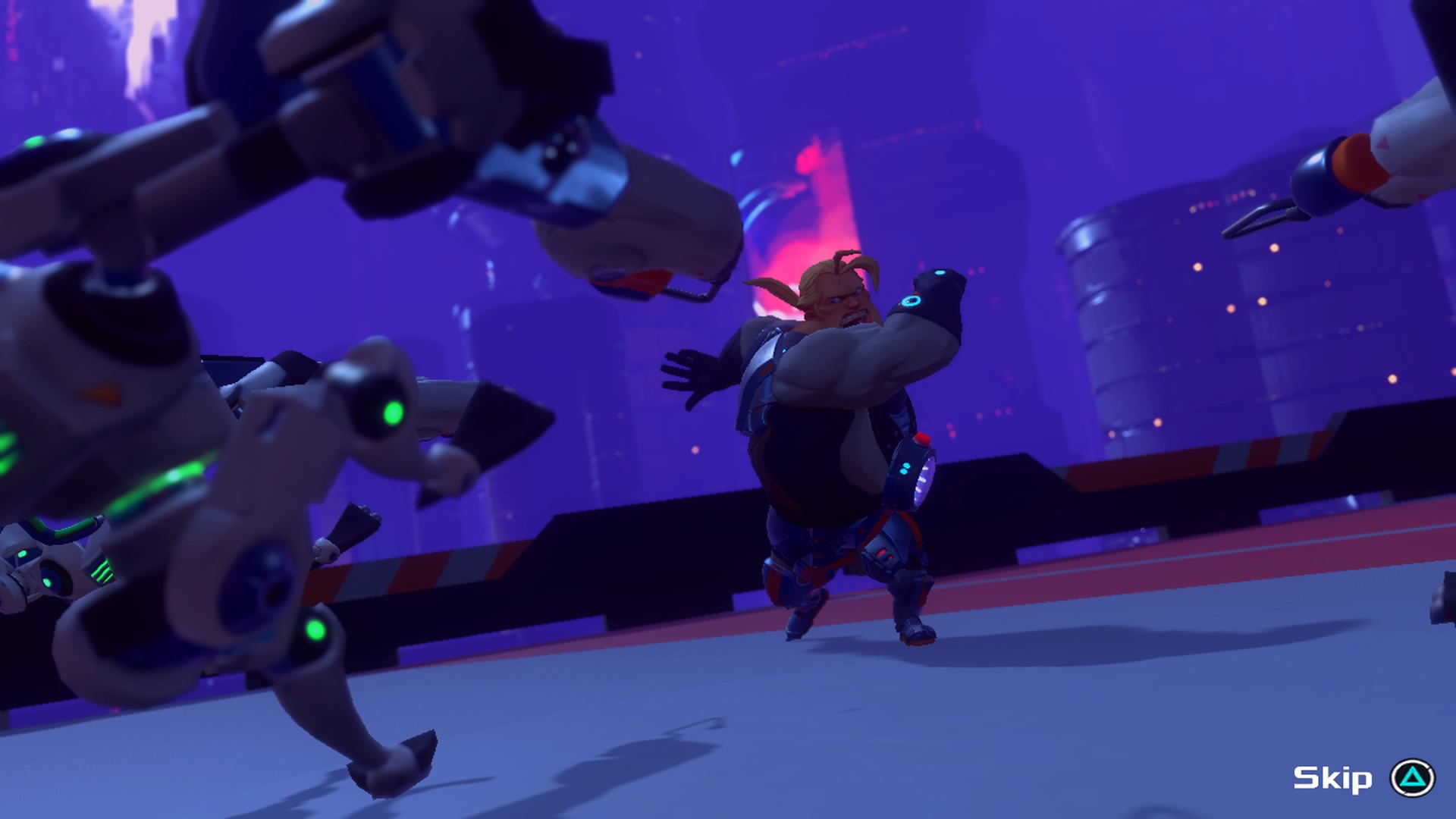 As someone undergoing a beat ’em up awakening, there’s a lot to like about Zheros. Initially released in 2016, the title has now been re-released to coincide with the game’s expansion DLC. Rimlight Studios are hoping this can boost what was originally a mixed critical reception. 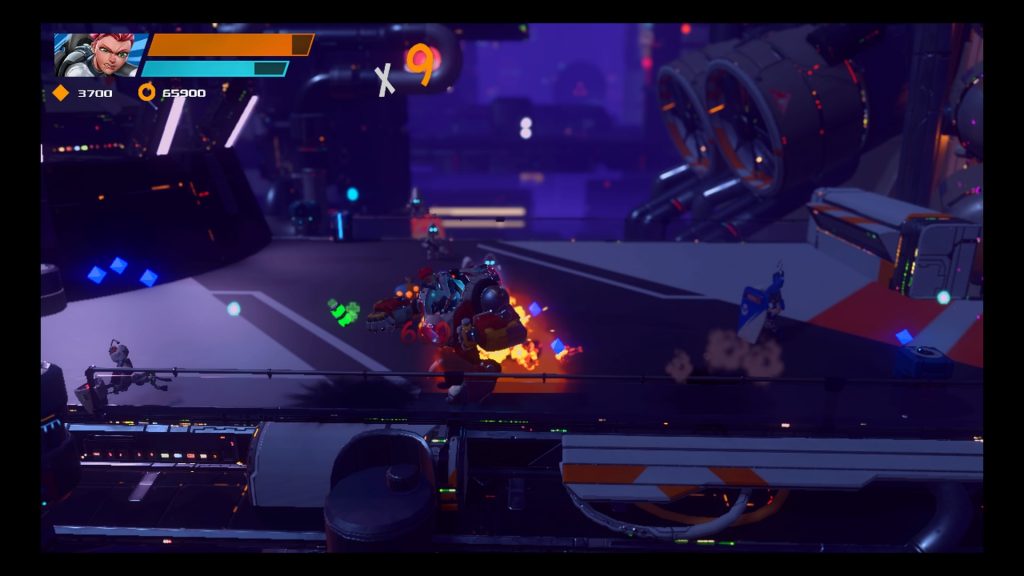 At first glance, Zheros is a colourful, stripped-back brawler with very little in the way of plot. There is an archetypal villain out to destroy the world using an army of mechanical deathtraps and it’s your job to stop him. The Zheros are Mike and Dorian. The former is a heavy, brutish type whilst the latter is a more nimble, acrobatic ninja. You can chose either to tackle the game’s 18 levels although swapping between them from stage to stage is not an option. You pick your poison and you stick with it. Both are capable although I find Dorian’s moves to be a lot more eye-catching. Don’t expect much exposition from any of the cast. The roles are clearly defined in the introduction with any other set-pieces used to unveil new enemies and bosses.

Our protagonists animate well with both friends and foe alike having a great amount of detail to them. There’s a variety to the enemies which is nice to encounter although, from a combat perspective, you’re not enticed to change it up. Each new zone introduces plenty of new enemies. However, there’s a clear fodder class which gets wheeled out all too often. Environments offer plenty of new things to see. Industrial laboratories give way to volcanic caves and each new level provides a spectrum of colour which makes each one look intriguing. They also encompass their own set of hazards from laser grids, conveyor belts and jets of fire. 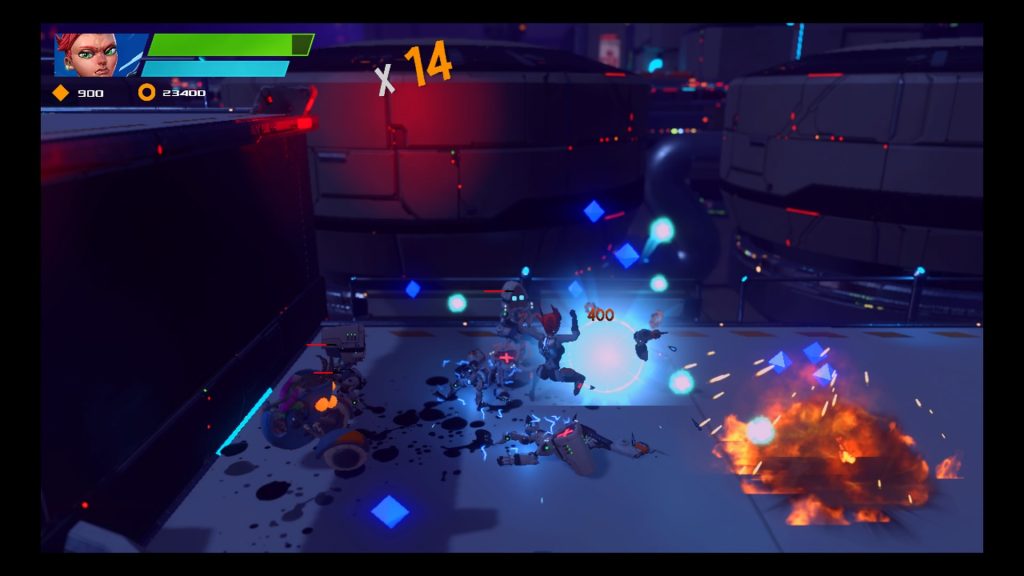 Combat is surprisingly deep. There’s a wealth of combos to choose from with running attacks, shields and gunfire used to extend your combo meter. It’s encouraging to see plenty of options when it comes to offence and a good, well-timed defence can reward you with shield parries and evasions. Your roll can be used to avoid attacks or obstacles and can really close ground quickly. It’s a shame there’s not a nuance to fighting to really back it up. I fell back all too easily into mashing my way home. It’s easily done and you’re not penalised for such things.

Enemies, for all their variety, can be brutally worn down with only one requiring an actual change of tactic to open up their guard. An upgraded shield can certainly be useful for parrying but the dodging and blocking mechanics don’t offer enough rewards to really master them. It’s nice that it’s there, I suppose. You’ll upgrade your combos, shield and gun frequently enough that you’ll probably want to see their new tricks and improved damage numbers.

Since release, difficulty’s been a bone of contention for many players. Uneven spikes and unforgiving mobs have been cited as a main concern and, my impressions have lead me to believe this has been rectified somewhat. Checkpoints still seem a little sporadic but the threat of death seems to have been alleviated. Health pick-ups are plentiful and usually conveniently placed. I found my first run to feature more death from pitfalls and platforming than actual combat. There are a couple of larger enemies deliver roadblocks. Stage hazards become a minor nuisance that can nibble away at your health. Fighting on a raised platform and being charged into the abyss (bloody Space Cows) delivered a particular headache. You can cricumvent it through dodging or decent positioning. Mobs will descend and corner you. In the latter stages a gauntlet is laid down which can give some frustration. 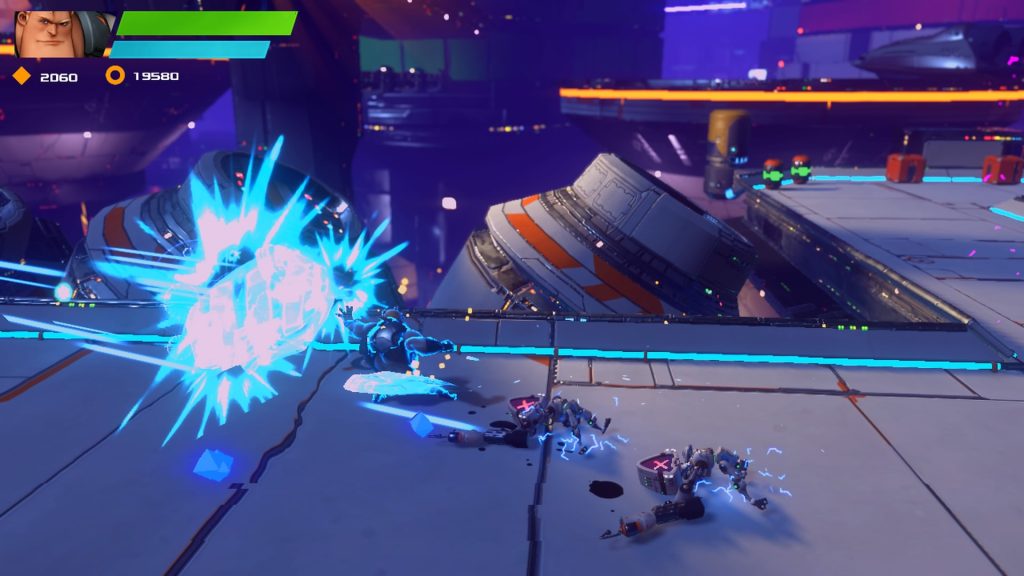 Your biggest enemy is a poorly-timed jump. To travel longer distances, you need to jump whilst running. This requires you to press in the left thumbstick and then jump. It’s a fiddle and I’ve found myself lose momentum before making the leap of faith. It’s another choke point that could hamper your progress through the reasonably short campaign, although platforming is still kept to a relative minimum.

You’ll find the game clocks in around seven-and-a-half hours. There’s a hard difficulty you can tackle and upgrades you can pursue to bolster your time with Zheros. There’s also collectibles to find. All of this assumes you can withstand the repetitive nature of fisticuffs. Levels vary wildly in length but, as you draw closer to the conclusion, they elongate. There’s little room for exploration or quieter moments so this might grind you down.

There’s also some curious technical moments. You undergo an initial load which seems worrying slow and, whilst load times improve, they aren’t exactly swift.  Framerate’s fine but the heavier action does bog it down with some hitches also stepping into play near the end of levels.  I’ve played an entire level where the depth-of-field has failed, leaving me with a blurry, soft-focused experience. It cleared up which, sadly, can’t be said for the DLC.  After initially patching out a graphical issue that effectively registered you blind for the entire expansion, I’m now presented with a crash that boots me back to the Playstation desktop.  Consider it an ongoing concern.  As it happens, the little I’ve seen of the DLC re-enforces some of the game’s fundamental problems.  Expect larger combos as the enemies take longer to defeat.  With that new found enemy resilience comes more time on the clock using a fighting system that feels a little long in the tooth, by the conclusion. 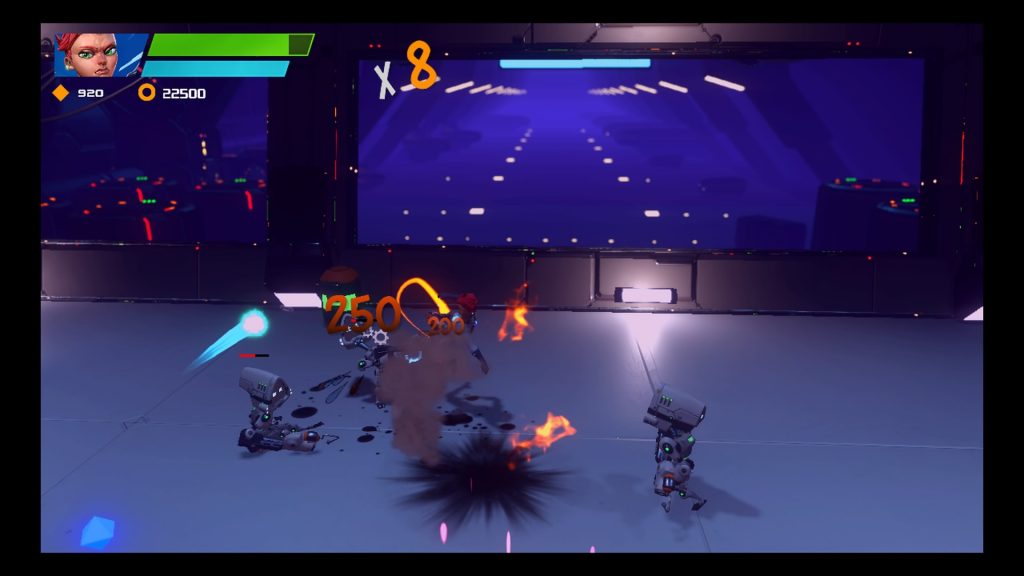 The base game itself has some interesting combat mechanics and strong art that unfortunately see repetition undermine their efforts. What’s here isn’t bad but the missed opportunities are painfully clear to see. It’s fine for a brainless mash, if you have the patience for some of the game’s issues.

Zheros
6 Overall
Pros
+ Bright, colourful art style.
+ Varied environments.
+ Plenty of enemy types to keep you busy.
+ Deep combat with plenty of options.
Cons
- Platforming can be a chore.
- Repetition sets in pretty quickly.
- Initial Load times are glacial.
- Curious technical hitches.
Summary
Zheros has a heart to its varied, bright visuals and depth to its combat which, sadly seems underutilised. Whilst there's a plethora of combos to bust out, a preference to mash will easily see the job done. Platforming frustrations and the repetition of combat wears down a decent brawler that can't quite realise its potential.