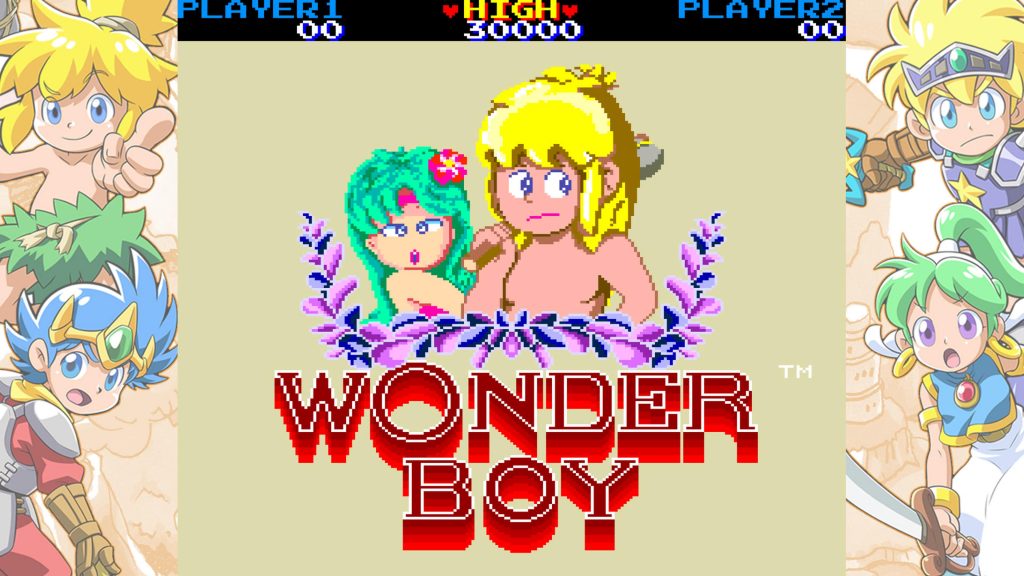 As mentioned in my Wonder Boy Asha review from last year, the Wonder Boy franchise is one that had passed me by, despite being a self-professed Sega fanatic ever since the glory of the Mega Drive days. Despite owning original copies of Wonder Boy III on Master System and Monster World on Mega Drive for some years now. I hadn’t really given the franchise a proper sit-down until Artdink’s loving remake came out. For those who aren’t going to read through that review, the TLDR version is that I loved it and found myself wondering why I had never taken to the series before.

There are a few reasons for this, but most of them are based on a barmy aversion to anything RPG back in the 90’s. I don’t know what it was. Sega tribalism because they didn’t focus on them in PAL regions? Me preferring arcade experiences that were pick up and play? That horrendous box art that featured a tooled-up knight complete with a 90s tennis player haircut and a baby eating grin? Whichever reason you can pick from the above, it was wrong (apart from maybe that box art) as the series has a lot to offer in terms of retro fun that shouldn’t really be missed by anyone. To address the balance for people like me, ININ games have worked alongside Westone to bring a selection of the classic Wonder boy games to the PS4 in a collection that spans four major releases. 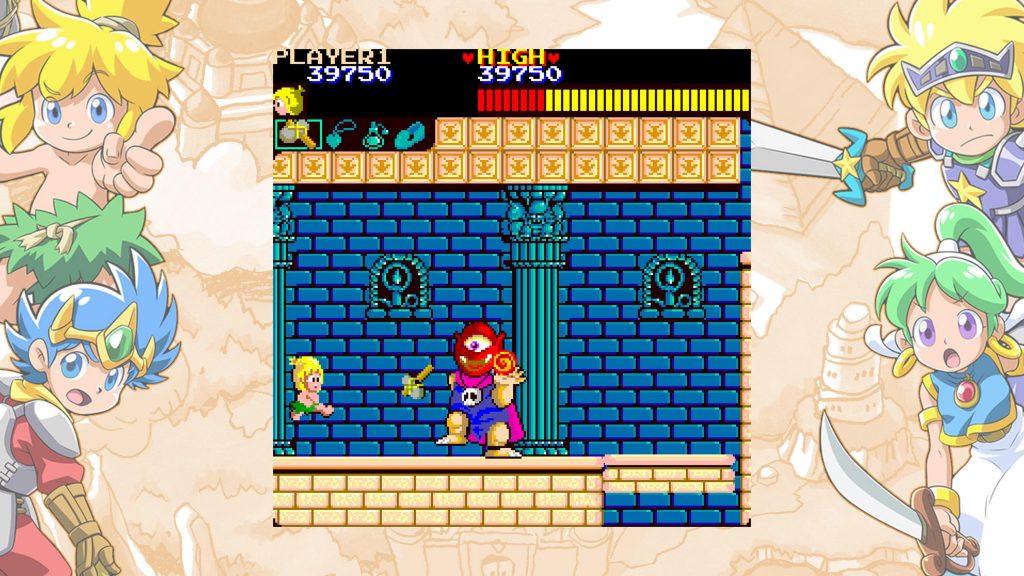 This would be a fine number of games to stick in a relatively inexpensive collection such as this. However, I do have a bone to pick. For some insane reason, the digital version of the Wonder Boy collection pales in content, compared to the physical counterpart available only through Strictly Limited Games which offers a staggering twenty-one games. Now, I am one of the biggest advocates of physical media, owing to the library of games I own in the real world that are currently behind me. However, the disparity of the offering between physical and digital versions is almost anger inducing, owing in no small part to the fact that arguably the best Wonder Boy (The Dragon’s Trap for Master System) game is only included in a limited, never to be printed again physical cart or disc. 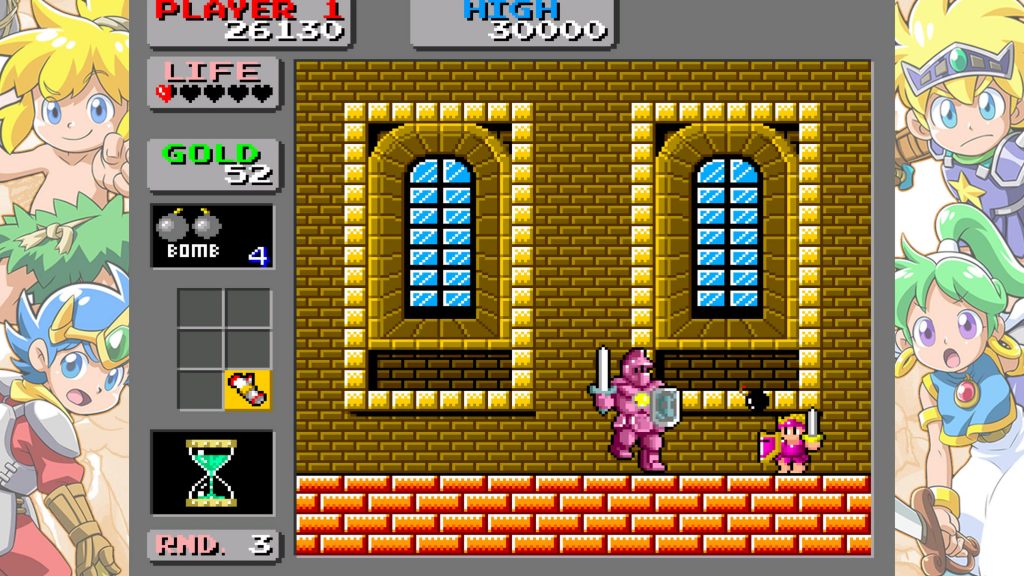 The first Wonder Boy is the most rudimentary. As an old school arcade game, the goal is about as simple as they come. The main characters’ girlfriend has been kidnapped by the evil king and as a result, Tom-Tom must run and jump through various colourful worlds in a bid to rescue Tina from the evil clutches of greedy royalty. While it is the simplest game on offer here, it still maintains its charm after all these years. The moreish pick up and play nature ensures that most players will get to see the end credits, owing in no small part to the ability to pump in as many virtual credits as you want to get the job done. For those interested in the difference, this title was both the inspiration for future Wonder Boy titles and the Adventure Island Series by Hudson Soft, which was a licensed / legally distinct offshoot of this game, so those who love the skateboarding caveman will get a kick out of this one.

Wonder Boy in Monster Land is a direct sequel to the first game but is the beginning of the ultimate evolution into what the series became. Despite still being an arcade release, this is where the RPG elements of weapon/armour upgrades, spell casting and speed/ height increasing boots that offer incremental benefits to Tom-Tom. After not being sure at first, I found myself enjoying this one a lot, as while the RPG nature of the game encouraged going at a turtle pace to ensure I was earning enough for those juicy upgrades, the ticking sand timer provided incentive to keep moving on with the game. There is also a ton of replayability, even if the broad strokes of a good run can be earned mostly through trial and error, there are plenty of secrets to find throughout and character upgrade strategies to consider, even if they feel archaic next to the competition today. 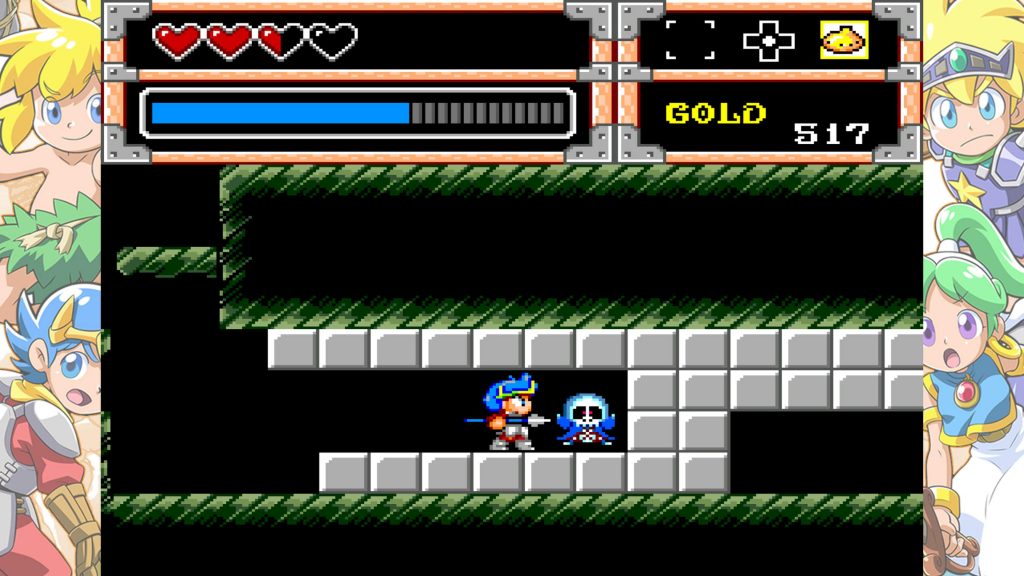 Things get a bit muddier in the collection as we move onto Wonder Boy in Monster World. While this is the third game in the collection, this is the fifth release in the series, with two version of Wonder Boy III existing, depending on whether you were playing in the arcades or Master System. Monster World is the first entry into 16-bit territory, and it shows, thanks to the advent of progress saving, fancy colour palettes and enlarged scope, Monster World feels like a much larger and grander adventure, taking the previous short lived arcade releases into a modest four-hour experience. I could live without some of its oddities however, with some like the Ocarina being a barrier at the early stage thanks to poorly translated button prompting.

As nice and playable as the previous games are, the marquee of this collection is Monster World IV. Also known as Wonder Boy: Asha in Monster World. Even though this game could have launched its own series due to how different the themes and characterisation are, this is the quintessential Wonder Boy title as it incorporates all the best elements of the previous games and places them in the most well-rounded adventure of the lot. My thoughts were covered well in my previous review of the remake here and the original version is largely the same. The only caveat is that if you own the physical release of the remake, you already have this version of the game. 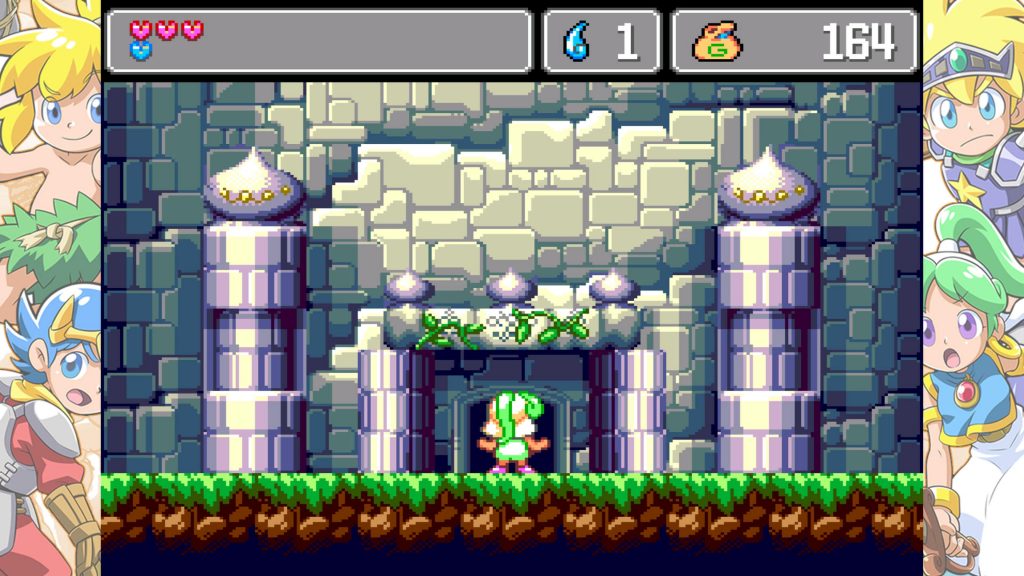 Overall, this is a solid set of games if you are wanting to dip your toes into Monster Land/World as this gives you both the origin and ultimate retro games of the series. It’s just a shame that this is exactly all you are getting with the collection. The history aspect is so threadbare, with only a small art gallery that showcases previous box and manual artwork. Where the collection benefits, is within the filter options that offer various modern and scanline options for the few CRT lovers that still exist. Other than this though, all you really have here is a series of roms with a menu on top to separate them. This would be fine, but some quality-of-life improvements would have been welcome, especially in moments where button prompts are necessary to perform certain actions, such as the Ocarina in Monster Land that will put you in an infuriating loop unless you play perfectly. Some work to translate the A,B,C control of the Mega Drive into PlayStation shape format would have been nice.

Wonder Boy Collection
7 Overall
Pros
+ A great opportunity to get Wonderboy Asha in Monster World if you missed the physical edition of the remake
+ Solid emulation, making these play exactly as you would expect and looks great
+  The rewind feature is great for accessibility as these games aren’t the most forgiving
Cons
- Feels empty compared to the physical edition of the same game which contains a staggering 21 games compared to the four on offer here.
- Does little more than you would expect from a retro collection these days in terms of filters/scan lines and other features
- The gallery doesn’t offer much insight into the artwork or history of Wonder Boy, for shame
Summary
Featuring four of the best games in the franchise, Wonder Boy Collection is a solid set of retro titles that should satisfy fans and those looking to experience some classic Sega goodness. However, the decision to restrict a wealth of alternative console ports and some of the best games in the series to the physical edition only is a major sticking point. This makes the digital version harder to recommend. There is nothing wrong with the games you get here of course, but it does feel like a somewhat stingy package that diminishes an otherwise great reason to celebrate a classic franchise.