Remote Life is a 2D horizontally-scrolling shoot ’em up from Italian one-man studio Next Game Level.  Now, we’re on quite a run of shoot ’em up reviews at the moment but this one is probably the most unique of the bunch.

Taking its cues from R-Type, this game sees you battling a force of bio-mechanical monsters in a space setting that evokes memories of Irem’s famous arcade game.  You play as John Leone, a lone pilot who has to save humanity from these intergalactic bastards.  Thankfully he’s got a spacecraft and the way ahead is packed full of weapons that he can pick up and use. 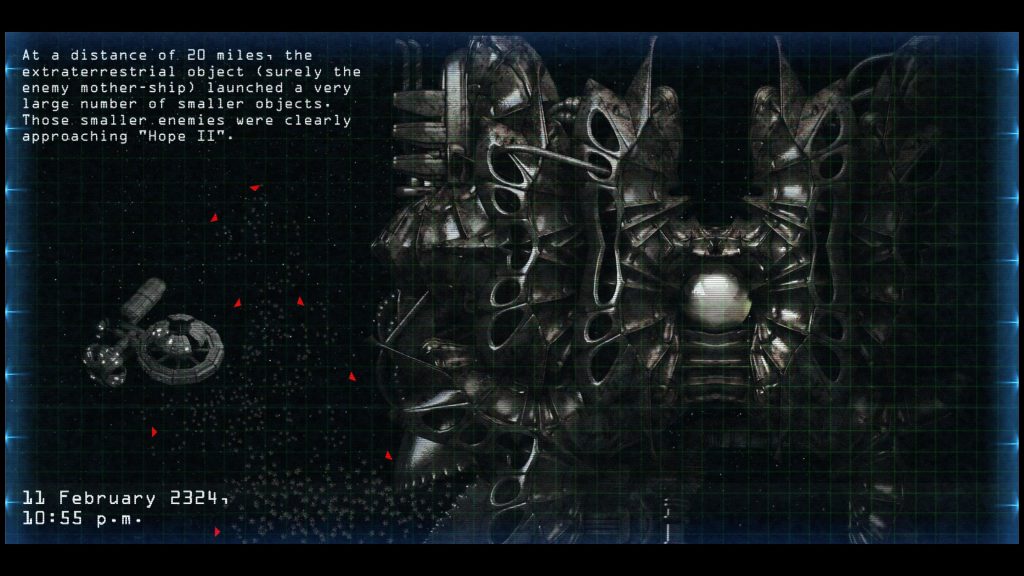 Unusually, although this is a horizontal scroller, the game uses a twin-stick control set up and that’s good because the enemies in this game like to approach from all angles and your ship has access to three primary weapon slots (switchable with the shoulder buttons) that fall into classes A, B and C and a ‘class D’ support weapon (usually cluster bombs or mines).  Along the way you’ll find temporary weapon pick ups that fit into those first three classes.  It’s a neat system that allows you to save good weapons for harder encounters and gives you plenty of room to experiment.  On top of that, you also pick up support drones that last a short time but will bolster your firepower for ten seconds or so.

You’ll need every bit of help that you can get as this game has sixteen levels that are full of enemies and environmental hazards.  The enemies, Giger-esque monstrosities are perhaps the best part of Remote Life.  The game is very much rooted in a sci-fi horror aesthetic and it’s really quite remarkable at times.  There’s an otherworldly creepiness to the game that sets it apart from the usual type of thing we see in this genre. 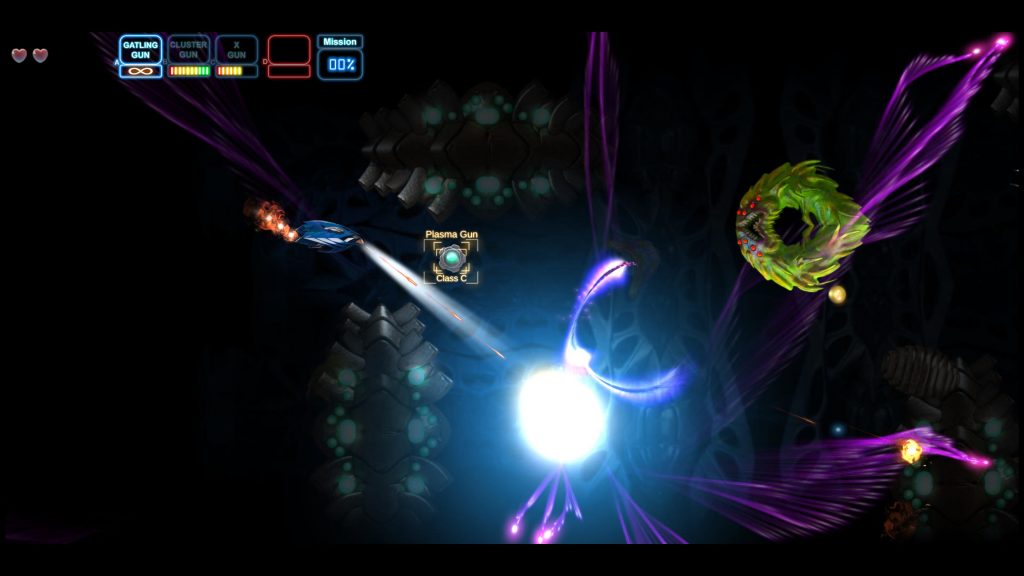 There are some issues though and these do, at times, threaten to spoil the party a bit.  The warning signs are there immediately thanks to a main menu that uses a clumsy cursor control system clearly ported from the PC version with little thought for console play.  Then you get some weirdness as the plot is told in the worst way, the only possible way it could be less engaging than just text cutscenes as the game actually uses a text-to-speech engine to generate the voice acting.  It’s quite terrible.  But we’ve never cared for plots in shoot ’em ups, so we’re not bothered.

The gameplay has a few issues too.  Some are basic such as the fact that your gun aims from the nose of your ship which throws off the twin-stick aiming.  Also your ship seems to have no hitbox so the whole thing is vulnerable which isn’t great.  This doesn’t make things unplayable but it can make it feel a little less intuitive.  More serious though are the issues around visibility. 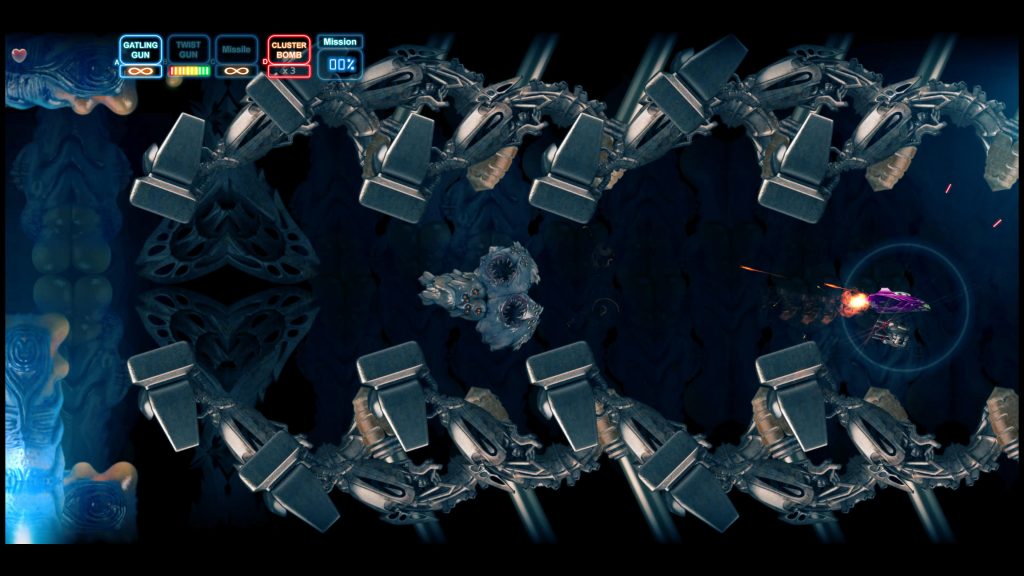 The graphics use a very detailed, hi-res style and this means that enemy bullets can be very hard to see but this is often made worse by sections of the game that are very dark.  Also, this is the kind of shoot ’em up where half your deaths come from the environment and sometimes its hard to see what is in the background, and harmless, and what’s up front and deadly.  When you combine all these factors, deaths can come very cheaply.

What we do like is that there are some notable set-pieces during the game with nice twists like escort missions and giant guns that you can dock with.  These add a bit of fun and drama to the proceedings and help freshen things up given how many levels this game has. 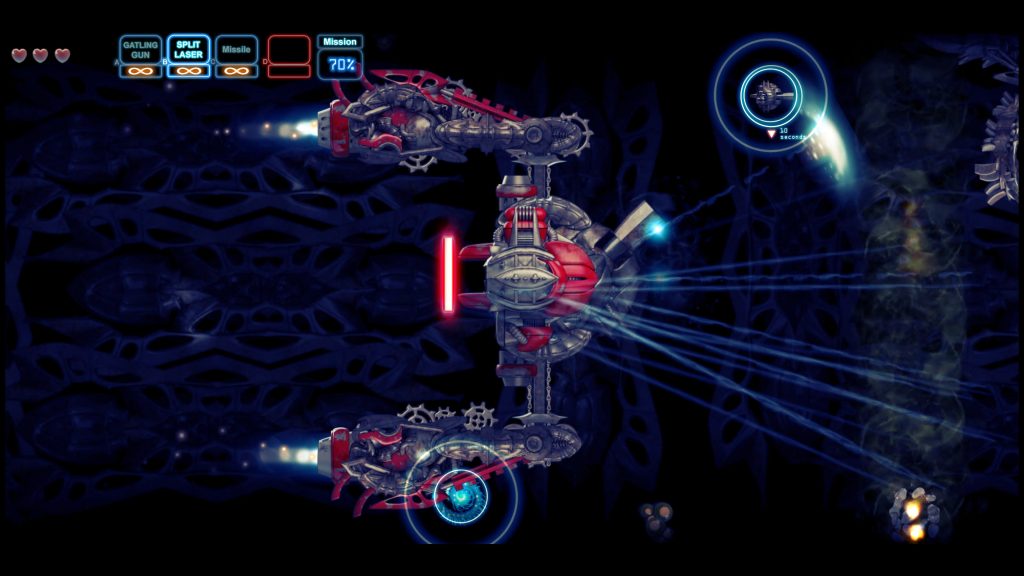 What’s less good is that sometimes the levels have moments that seem poorly planned such as giving you one of those ten-second drones just before section with no enemies.  It almost feels procedurally-generated at times.  This is why games need teams developing them because while this game is technically pretty impressive for a one-man studio, it might have been better served by having someone else on level design.  We also weren’t happy that that enemy firepower can go through the environment but yours can’t, which makes the action quite claustrophobic at times.

Unusually, there’s no scoring in this game at all.  The focus here is on getting through the game and surviving its challenges.  That does suit the grimy, scary setting but it might limit replayability as there’s no scope for improving your overall game. 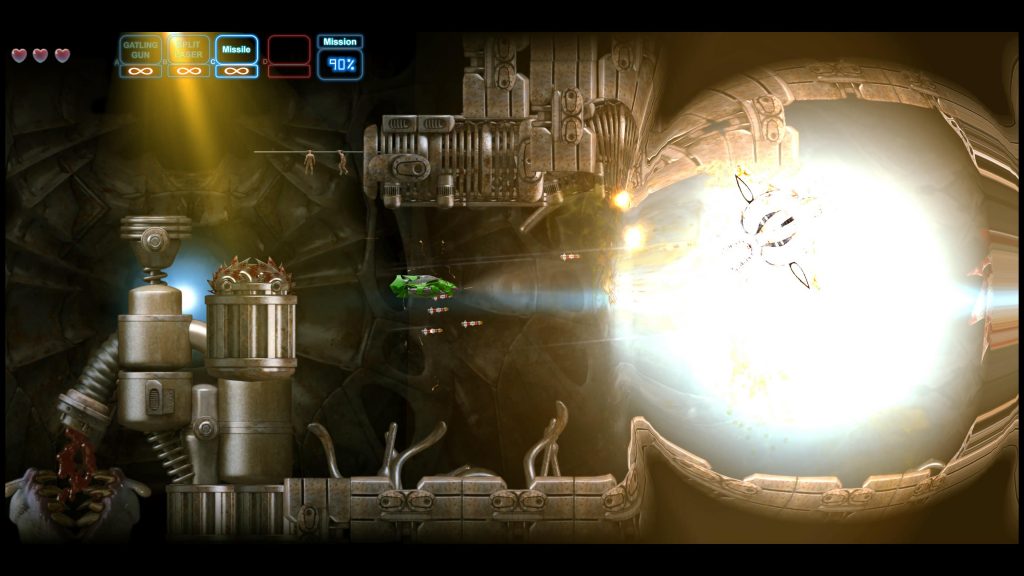 With all those niggles, it’d be easy to write this game off as a bit of a mess but there are positives.  The weapons you find are varied and dynamic, the enemy designs are great, there are some really cool bosses to battle and the high resolution visuals can look really nice especially when coupled with the game’s neat lighting effects.  The music is also pretty bombastic although it doesn’t seem to fit the levels all that well so there are plenty of times where it stops and the restarts.  Given that the game has a consistent forced scroll, that seems like an unnecessary oversight.

Overall, we quite like Remote Life.  It speaks more to the horror movie fan in us than the shoot ’em up one but it does make for an unsettling journey into enemy territory where you do get a sense of the hostility and malevolence of your foes.  As a shoot ’em up, it’s a little bit messy and under-developed but its an admirable effort for a solo coder.

Summary
Remote Life is an admirable release from a solo developer but has some issues around visual clarity and level design that hold it back a little. However, if you can treat it more as a survival horror game than a pure shoot 'em up, the game's creepy atmosphere and memorable enemies make it well worth checking out.