I’ve reviewed a few strategy games recently. Banner of the Maid was a more traditional strategy RPG whereas Spaceland had the strategy gameplay but although it had upgrades it was less reliant on RPG mechanics. Wintermoor Tactics Club falls into the same category as the latter.

You control Alicia, a student at Wintermoor Academy and member of the Tactics Club. Wintermoor Academy is full of clubs for all sorts of things but the Principal has decided he needs to discover the Ultimate Club and so pits everyone against each other in snow ball fights in a knockout competition. If your club loses it gets disbanded until only one club remains. 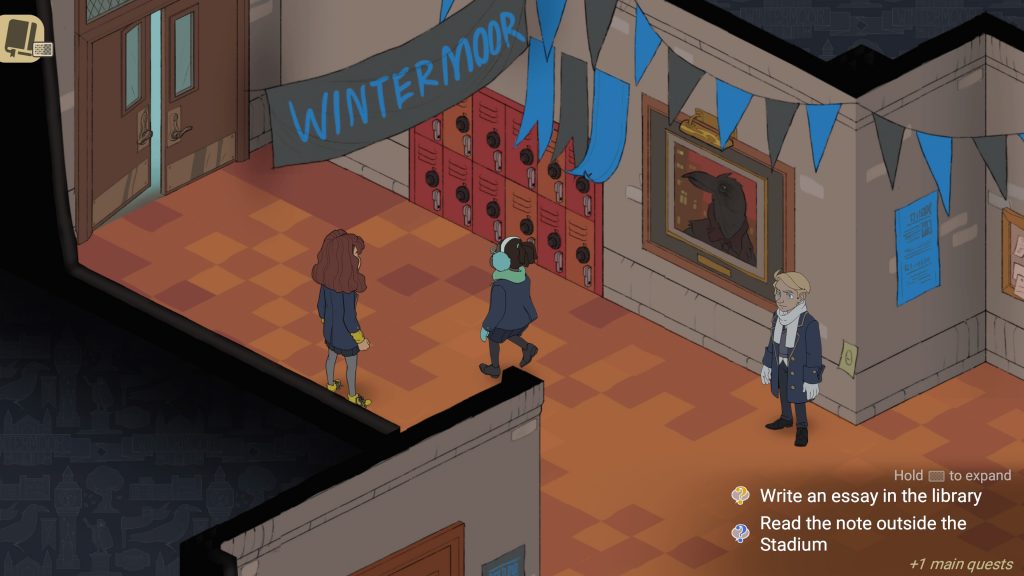 Luckily the Tactics Club is obsessed with Curses & Catacombs, a Dungeons & Dragons-style table top RPG, and can take this experience onto the battlefield. Whether it’s the Club playing out different fantasy scenarios for fun or battles against other clubs in order to progress in the competition the structure is the same, your characters take the form of their fantasy avatars and have the same abilities.

These battles take place on a small arena, easily fitting the screen, with your opponents starting in set positions and you’re able to position your characters within a starting area. Your team gets to move first and once they’ve moved and acted it’s the enemy’s turn. Your characters move on an isometric grid and movement is limited depending on the character. You have to move using the analogue stick, oddly, which takes some getting used to as the directions map one-to-one rather than up being up and right, for example. Each character has different attacks with different ranges and damage. You can view enemy’s stats and movement/attack ranges so in theory you should be able to plan out your actions before the fight even starts. 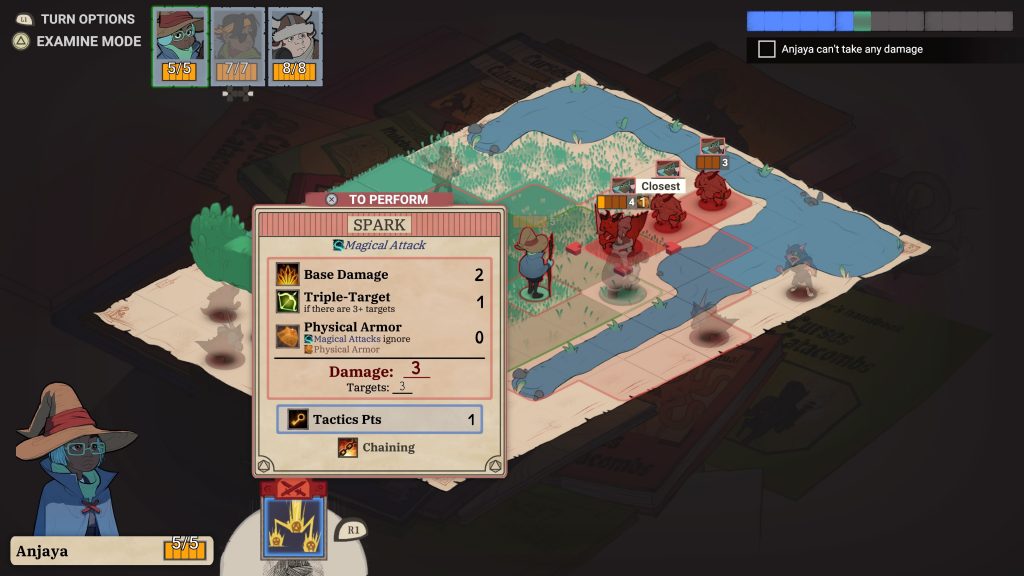 This is important as you start with three characters and can only ever field three in a mission, so once your Club starts to grow you’ll want to have an idea who you should be taking into battle. Enemies have magic or physical resistance and your characters will generally specialise in one or the other so you’ll need some forethought. The missions are quite easy but if you’re struggling to deal damage characters will fall and certain missions will have set requirements like someone not dying or even not being allowed to take damage.

As the arenas are so small the levels are actually over pretty quickly. This is good as you’re given medals depending on performance. You’re rated on characters defeated, damage taken, turns taken and how many supers you use. As well as missions being quite quick to replay any medals you’ve already got remain unlocked so if you only need to use a couple of supers, for example, then you can concentrate on that and not worry about the other requirements. Spaceland suffered from having quite lengthy missions which made replaying them to figure out the puzzle a bit of a chore whilst I actually enjoyed going for medals in this if I’d missed out on them first time around. 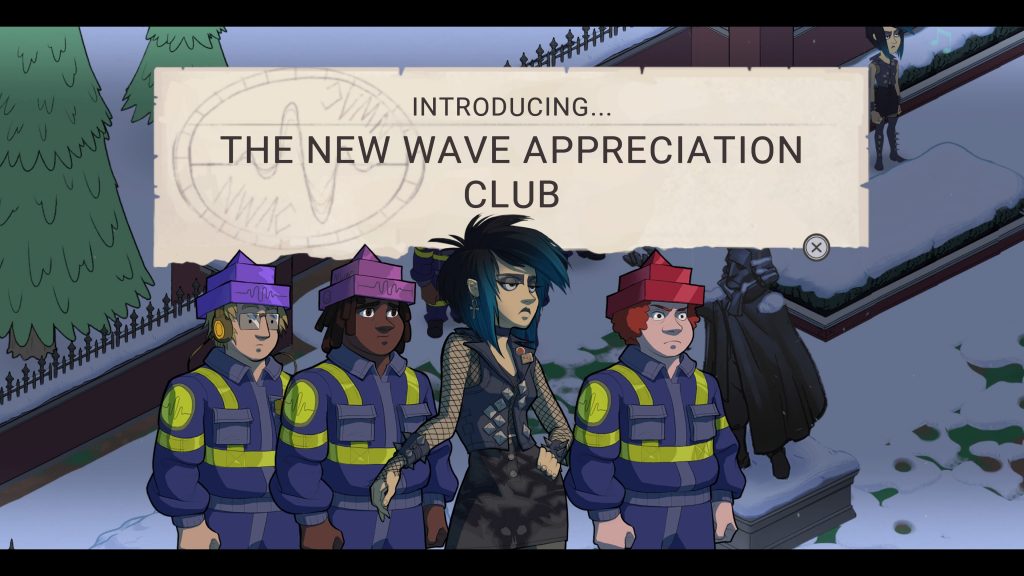 Outside of battle Alicia will be able to travel around the school talking to her fellow students. You’ll start to recognise them as you play through the game and learn their personalities, even if they’re not directly involved in the main story or any side missions. Side missions are pointed out on the map screen and generally just involve you talking to the quest giver, going somewhere else to talk to someone before returning to the original quest giver. Not super enthralling but you get new items that you can equip to further customise your approach to a level.

As with all the graphics the exploration sections are 2D, viewed from an isometric angle. All the characters are well drawn and when you talk to them they have visual novel style portraits pop up. Each building in the school has to be loaded in from the map but they can lead to multiple rooms themselves. There’s a load between each but they aren’t generally too bad, but it seems if you play for too long then the loads do get longer and longer, with me waiting over forty seconds for the map to come up on occasion. Restarting the game did seem to solve it but considering how little it’s loading (the cheerful if repetitive music continues throughout and there are no voiced lines to load in) this shouldn’t be an issue. The menus also lag. You don’t spend a whole lot of time in them but again, with what’s going on both the menus and the loading should be pretty snappy and would make a smoother experience for it. 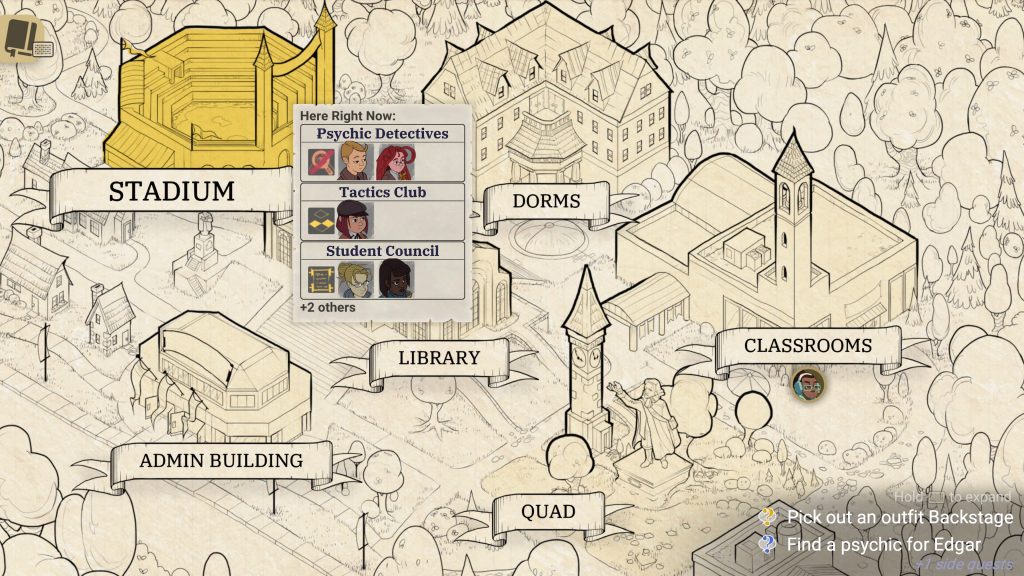 Similarly odd is the way the game handles saving. When you save the game creates an individual save file each time. It tells you how many you’ve used and that you can use up to two hundred but the fact that you can’t choose to overwrite any is bizarre. I guess it means you’ll never be worried about losing a save but I thought some open world games were bad for the amount of saves they make but this will take some beating.

For the type of game it is a relatively short experience. I still found that I had to split up the sessions rather than ploughing through it, especially with the load times bug as the constant walking back and forth in between short, enjoyable but similar fights did start to wear. The story is entertaining though, primarily thanks to the characters and their personalities but again a couple of chapters in a play session was enough for me. It is a very pleasant and enjoyable time though not particularly challenging. If you’re a fan of strategy games or like puzzling out solutions then Wintermoor Tactics Club could well fill a little hole. 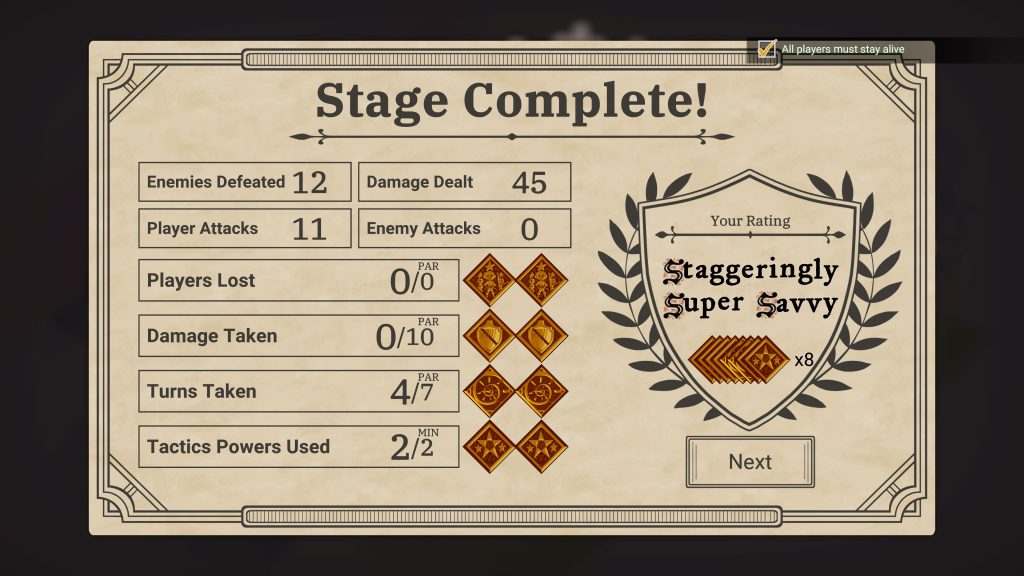 If you’ve been interested in a similar title but felt a little overwhelmed then this could introduce you to some concepts gently, as there’s even a no-fail setting to eliminate all difficulty if you choose. More experienced players won’t find anything too challenging but will probably enjoy their time with it all the same. Apart from some technical issues Wintermoor Tactics Club is a very well made game where the parts fit together nicely. The visuals and characters have a charm that ultimately make the experience worthwhile.