Banner of the Maid is a strategy RPG in the vein of Final Fantasy Tactics or Shining Force. It’s been developed in China rather than Japan but that makes little difference as it follows the template closely. The last Chinese developed RPG I reviewed was Sword and Fairy 6 and although it was a fun enough game it was a technical mess so the only way is up! 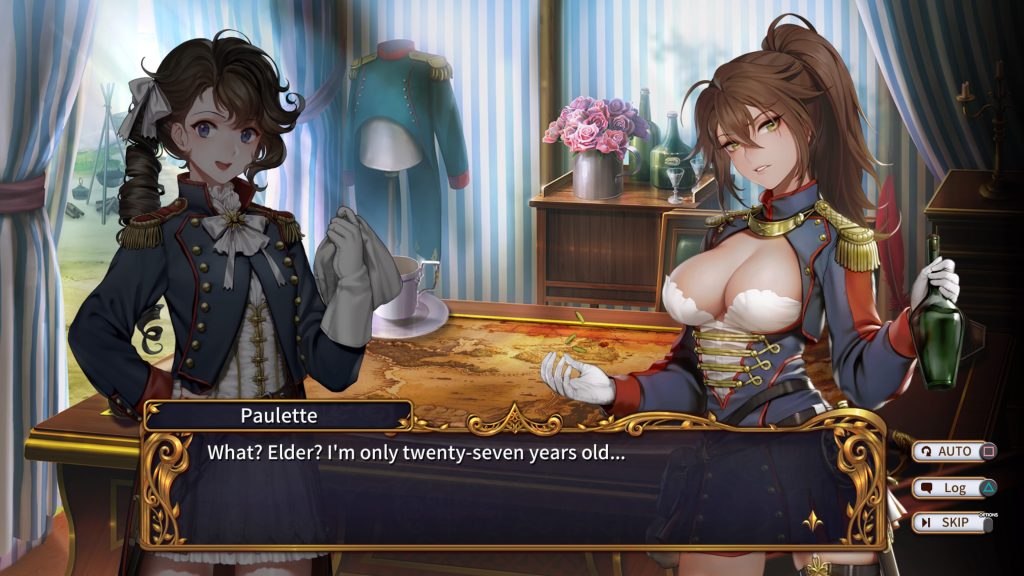 The story follows Pauline Bonaparte, sister to Napoleon, as she fights for France against invaders and bandits. She is a Maid, a female with extraordinary powers. From a tiny amount of research she was a real person, but wasn’t a teenage soldier and didn’t have some mysterious power, unsurprisingly. How much the story is actually based on history I couldn’t tell you but I expect that maybe battles against Austrian armies within Italy might have happened, whilst the broader story arcs didn’t.

The story is actually a surprisingly large part of the game. From that I mean that outside of the battles, which I’ll get to shortly, it takes on a very visual novel quality. 2D backgrounds with stationary 2D portraits of the characters represent the text being spoken. There is no voice over and, unfortunately, the translated dialogue is quite clumsy. How well written it was in the original Chinese I don’t know but, although it generally can be made sense of, the writing is difficult to follow and doesn’t sound natural in English. The characters also have a very cliched anime feel to them which is fine, but if you’re going to get into Banner of the Maid it will be for the battles. 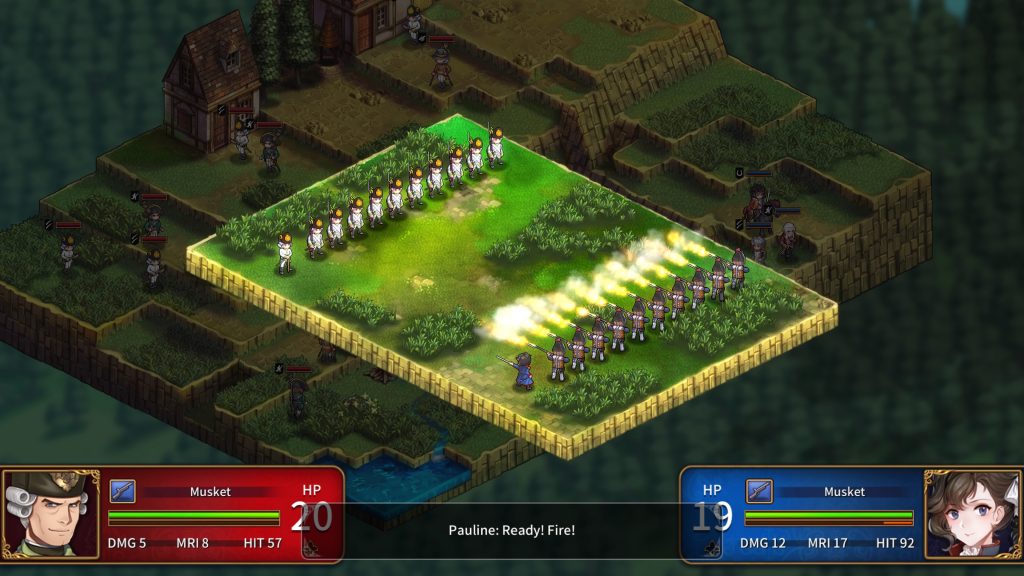 These are set up by the story and take place on set maps. Your army has starting positions which you can switch around and then you move all your troops before the enemy gets their turn. Characters can move a set distance on a grid, depending on their stats, and if they’re within range can perform an attack with a selected weapon. Weapons have limited uses in battle (like Fire Emblem, but they don’t break) so spreading out your damage through your force and having spare weapons on hand is a must. Characters have set classes which are strong or weak against certain other classes, almost like an element system or rock, paper, scissors.

Due to the time period a lot of the weaponry is gun based, but the majority still require for you to be right next to your opponent to attack. Rifles can attack from two squares away and artillery can attack from even further and are useless at close range but otherwise muskets have the same range as sabres. Attacking builds up morale which can be used to perform a Heroic attack which is more powerful and grants more experience than a normal hit. 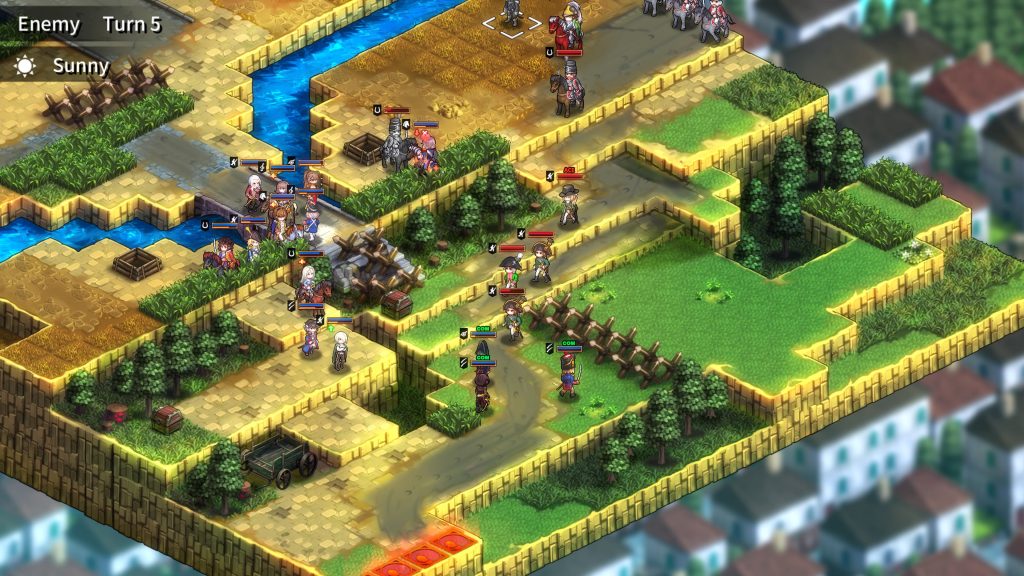 When you attack if the enemy doesn’t die they counter attack, as do you when attacked by the enemy. Juggling your troop’s attack, morale and HP as you make your way across the map is key to victory. Generally apart from Pauline and maybe one other key troop anyone can ‘die’ and they’ll retreat but your ranking will suffer on the higher difficulty and of course you’ll be without that character for the rest of the battle. Some missions also have challenges to attempt, which can be completing the mission within a certain number of turns or defeating everyone on the map before defeating the boss. Completing these is tough and epitomises Banner of the Maid‘s gameplay which often feels like you have to do things in a specific way in order to complete the levels. More like puzzles to solve than being truly tactical.

This is also due to the fact that the scenario can change mid-mission. This can be reinforcements turning up, for you or your enemy, or the weather changing which affects your troops ability to move and dodge. It’s the same every time you play so it can feel like you need to learn the map before you can attempt to have a decent crack at it. There are optional side missions you can complete for more money, gear and experience and some are repeatable so you can grind your way to victory in some cases but having a character retreat because of a missed attack or something unforeseen can be disheartening. 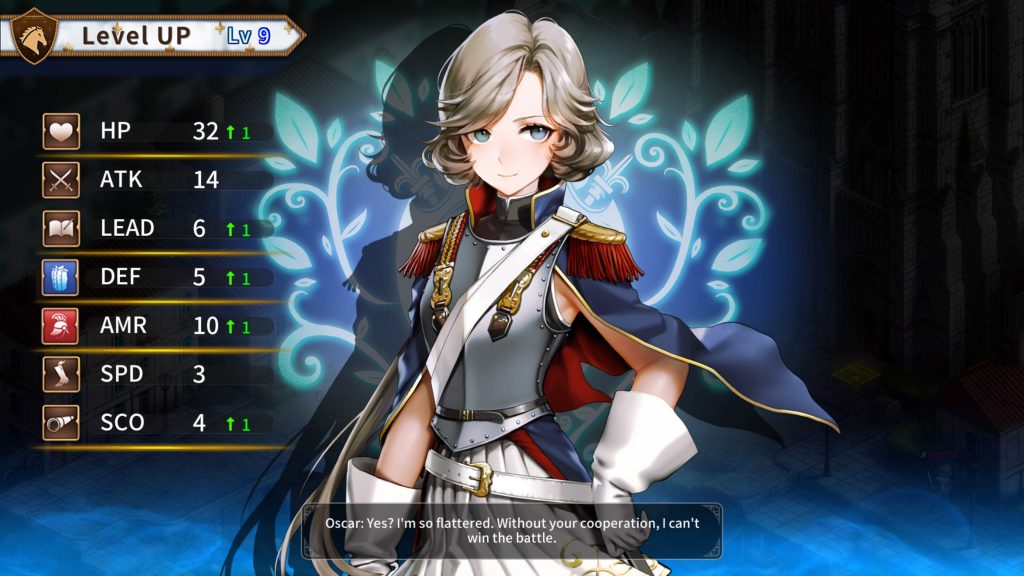 The inverse is also true however, beating a mission and the associated challenge does give you a feeling of accomplishment, especially if you’ve struggled to find the correct method. There are three difficulties to attempt, with Officer Mode allowing for infinite saves during missions whilst General Mode restricts that to once per mission. Story Mode is the other option which the game describes as ‘very easy’.

During the story sections you’ll sometimes get dialogue options to choose which can change scenarios in the future and also affect your standing with the factions in the game. These factions act as shops and the higher they think of you the more stock they have to spend your reward money on. It’s another layer to think about. You can also buy new abilities for characters using items gained from killing bosses to further adapt your play style. It’s a lot to take on as this is a long game and you don’t want to play yourself into a corner.

I will quickly touch on the presentation which is a mixed bag. The 2D portraits for characters are actually really nice, though more attention has been paid to the women than the men I’d say. Backgrounds are so-so. In battle the graphics are purposely low tech, with little 2D chibi characters running around a basic map. When you initiate an attack a window shows up to show a little animation which is okay, but I quickly turned it off as it doesn’t really add too much but does slow battles down a lot. As mentioned before there is no spoken dialogue but there are grunts and phrases uttered in the battles, but in Chinese only. The music on the other hand is actually really good, enhancing battles and setting the mood for the story beats. 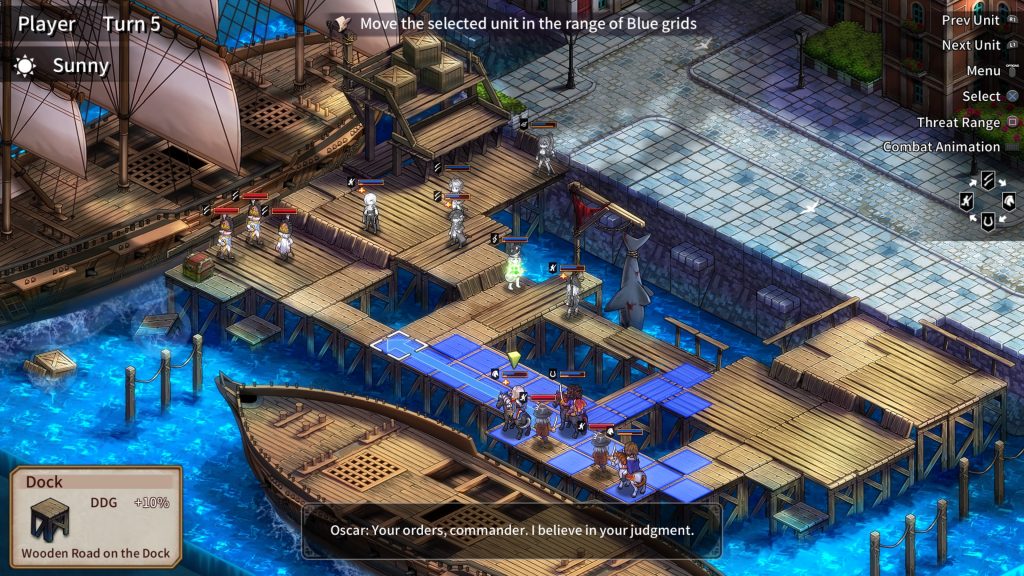 Banner of the Maid didn’t quite bring back memories of playing Shining Force III on the Saturn for me but it had its moments nonetheless. The translation undermines a lot of the story but the combat and character progression, as long as you realise it’s probably not as flexible as you’d hope, is enjoyable when you succeed. The presentation style isn’t AAA but is still very good and, unlike Sword and Fairy 6, it works. It’s also very reasonably priced so fans of any strategy RPG should give it a look and will get a fair amount of enjoyment out of it.

Banner of the Maid
7 Overall
Pros
+ Plenty of battles and variety
+ Very nice presentation
+ More than fair price
Cons
- Battles can feel more like puzzles at times
- Clumsy translation
Summary
Banner of the Maid is an enjoyable strategy RPG for a low price. The levels feel like they require learning at times rather than simply strategising your way through but completing a mission and its challenge is very rewarding. The 2D artwork and music is also very pleasant. Worth checking out.