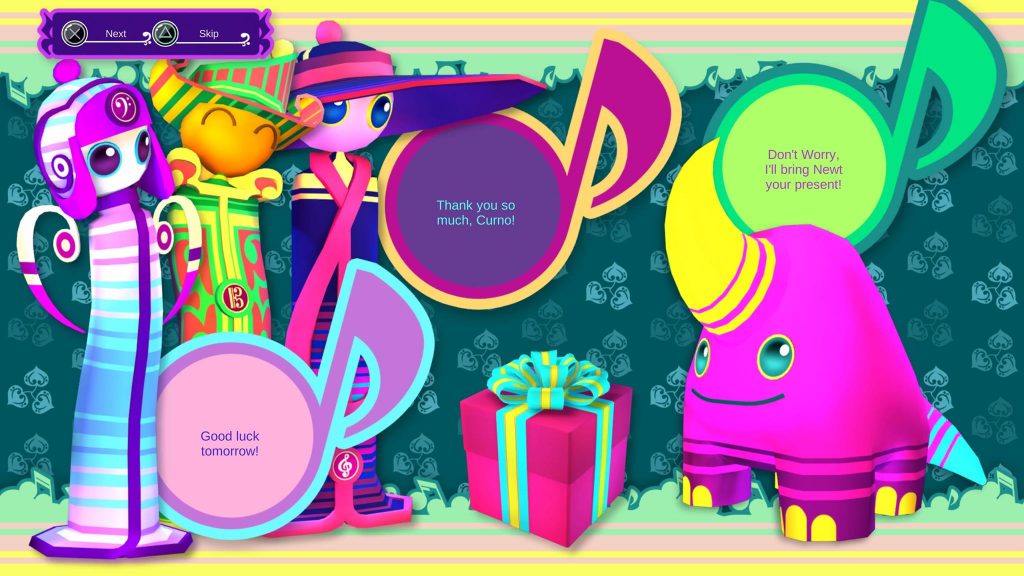 There isn’t enough praise given to games that appear in the category of palette cleanser. These are the type of titles that offer something a bit different from your usual run and guns or fighting games. These unsung heroes generally appear in the form of indie retro platformer efforts or rhythm action games from Harmonix, the key signifier being that they are short, fun and can generally be quite forgettable, should you be in between big releases and don’t want to commit to another 250-hour epic.

Newt One is the textbook definition of the previously mentioned. It’s clearly been designed as something you can dip into and enjoy, without the risk of losing where you left off after a long absence or the sense of foreboding that comes with expecting a tough few fights that will surely end up taking all those sweet Sunday hours from you. 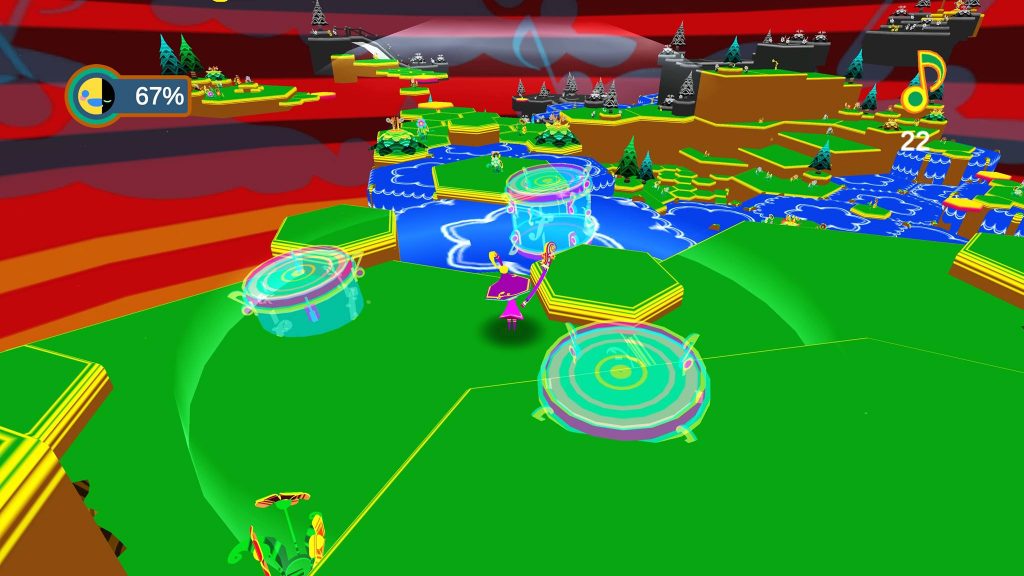 You play as Newt One, a young lad that finds himself in the middle of a crisis. Colour is being sapped from the world around him, the stark result of a black and white state called the ‘Great Slumber.’ It is Newt’s job to traverse the geometrically designed worlds, bringing both colour and music back to awake its inhabitants. To succeed in this task, the player guides Newt One as he floats around the world, bumping into scenery or creatures to awaken them. There are no enemies to dispatch, no glaringly difficult obstacles or even deaths. Instead, what results is a short and fun 3D platformer which is more about traversal and exploration than anything else and that’s just fine with me. It’s a stark change of pace compared to the more action orientated shooters or high stakes storylines exhibited in other titles. Newt One revels in letting the player go at their own pace, allowing them to seek out every monochrome item to change to colour or to speedrun should the player see fit.

There isn’t much variation from this throughout the game. However, there are a couple of powerups to allow Newt One a bit of spice. Throughout certain levels you can pick up one of three powerups; a drumkit that allows you to freeze water/ lava and send out a burst of colour energy, a set of wings that allow a higher jump and glide across gaps. The third is an item that appears once each themed world and remains consistent throughout the world’s stages when picked up. This is a wand which shoots out colour energy to nearby objects, making colour changing the stark landscape a much easier task, saving Newt from having to bump into things individually. Beyond these, that’s pretty much it for variance of duty. What I will say however, is that one could argue that Devnari didn’t want to over-stir the pot in terms of mechanics, resulting in a more refined and balanced gameplay arc. 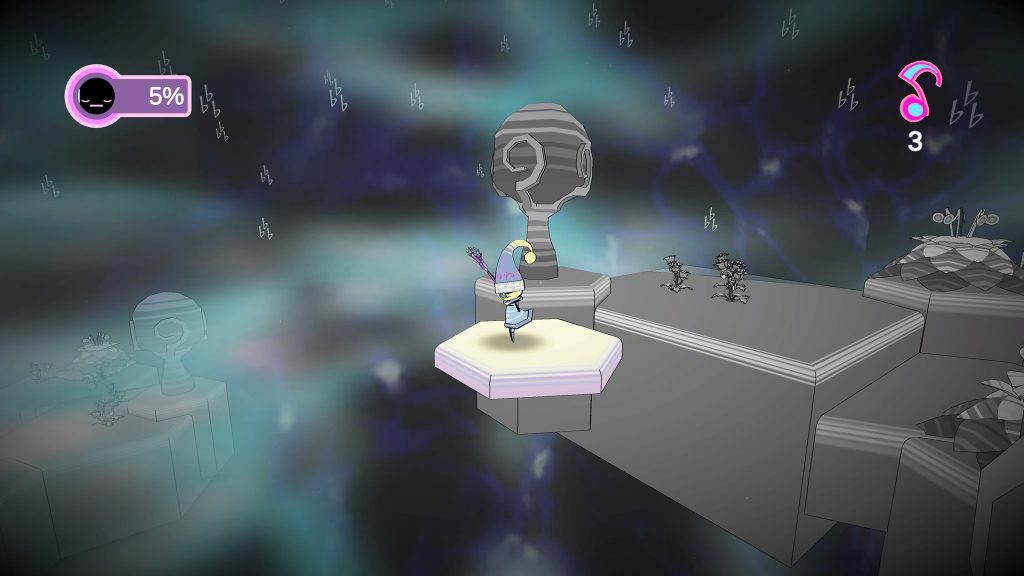 What’s really striking about Newt One is something that the screenshots may not necessary convey well enough, is how well it all gels together. The colourful, untextured abstract worlds coming to life with a touch is almost therapeutic in execution. The controls of Newt feel tight enough and responsive, with just a hint of momentum-based physics to contend with and the background soundtrack ramping up as you progress further through each stage feels just great. Throughout the game’s four stages (extra ones unlocked based on collectables you can pick up) the music fits the themes nicely, from the vibrant forest levels to the cold and slippy Glacier stage. For an indie game of this price point, few put together everything as nicely as this.

That’s not to say there aren’t caveats however. These come in the form of repetition in the soundtrack as each world only has one theme over seven stages each and there are moments of frame rate slowdown which mar the overall experience. Others will be less inclined to forgive Newt One for the lack of stakes also. The story that is woven throughout the game is presented on 2D slides which basically consist of colourful characters (including a rather rudimentary blob creature with a horn called Curno) that feel flat, talking about chosen ones or whatever. 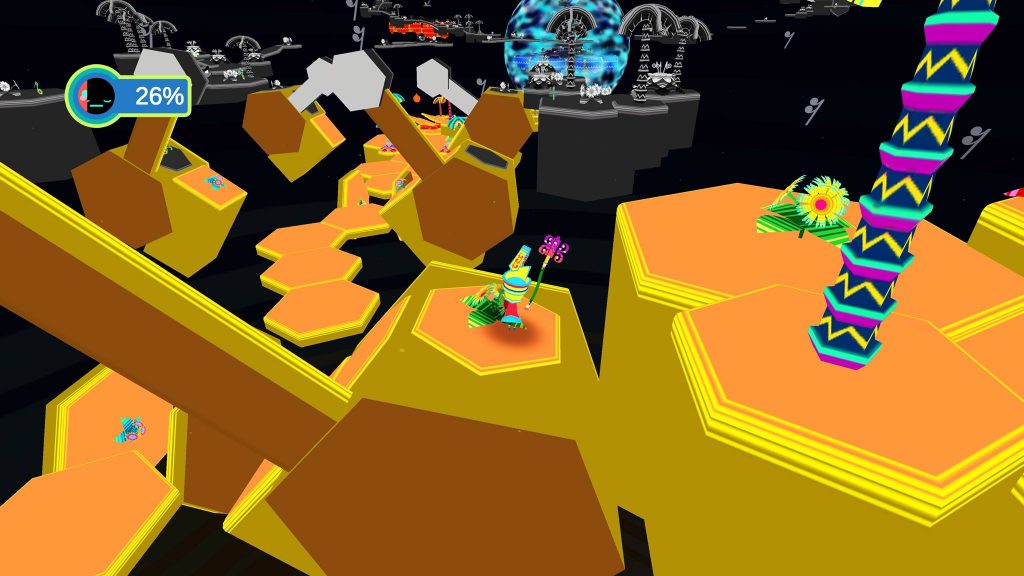 Luckily, the story is ignorable and doesn’t take away from Newt One being a fun, indie effort. It certainly won’t win any awards for epic scale, compelling narratives or grade-A visuals. If anything, Newt One provides a great argument for not every game needing to strive for those goals. It’s just a great little palette cleanser that doesn’t request too much of your attention to enjoy and sometimes, you just need a bit of that in your life.

Newt One
7 Overall
Pros
+ Charming, bright and colourful graphics
+ Incredibly relaxing
+ The very definition of a palette cleanser
+ Pretty damn unique
Cons
- The between stage story sections are as low-fi as they get
- Zero stakes
- No real variation to speak of
Summary
If you look in the dictionary of terms for palette cleanser, then Newt One would likely appear in the definition. The game features no stakes, violence or compelling storylines but makes up for that with a relaxing, fun gameplay loop and attractive low poly visuals.