If you’re unaware of the term ‘immersive sim’ then it’ll probably mean nothing to you. It’s a genre that let’s the player choose, whether that’s story options or how to play. It wants to immerse you in the experience by letting you play how you want and adapting around you. Generally they’re seen as first person games like Deus Ex or Dishonored but Weird West bucks that trend by being a third person immersive sim. Does the change in camera angle spoil that immersion? 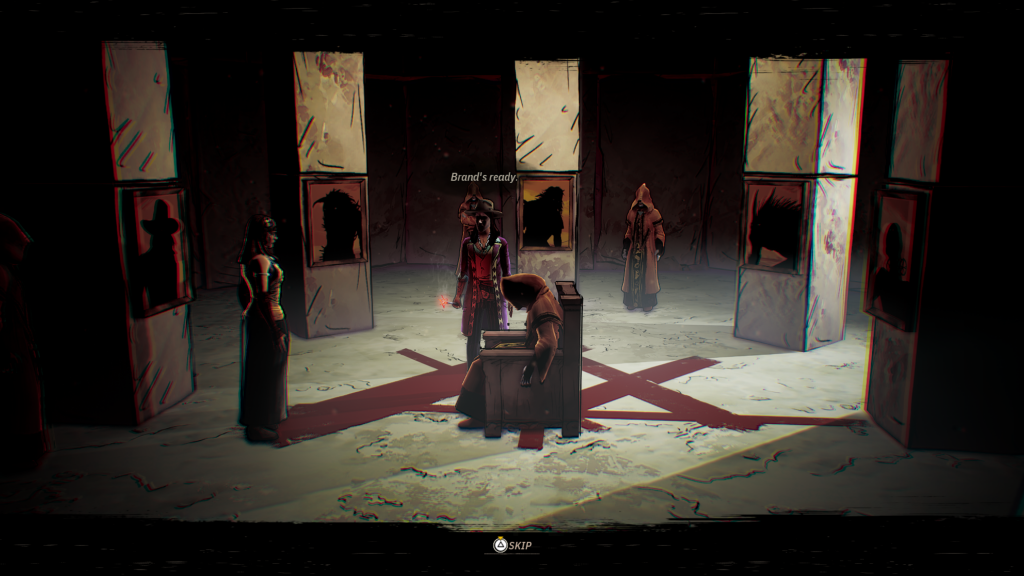 As the title implies it’s set in the Wild West but a fantastical version with the occult, magic and otherworldly creatures. It’s got a unique set up in that you don’t control one character, you jump from one to another throughout the story. They’re all linked by a brand on their neck which is placed there by some mysterious cloaked figures but they all have their own adventure to experience as well as figuring out what the brand is.

You start as Jane Bell, an ex-bounty hunter. The brand appears just as the local gang kill your son and kidnap your husband. With your life torn apart you dig up your bounty hunter gear and go in search for any clues as to your husband’s whereabouts. This’ll take you to towns and abandoned locations for you to explore and infiltrate, either to forward your investigation directly or through helping others. 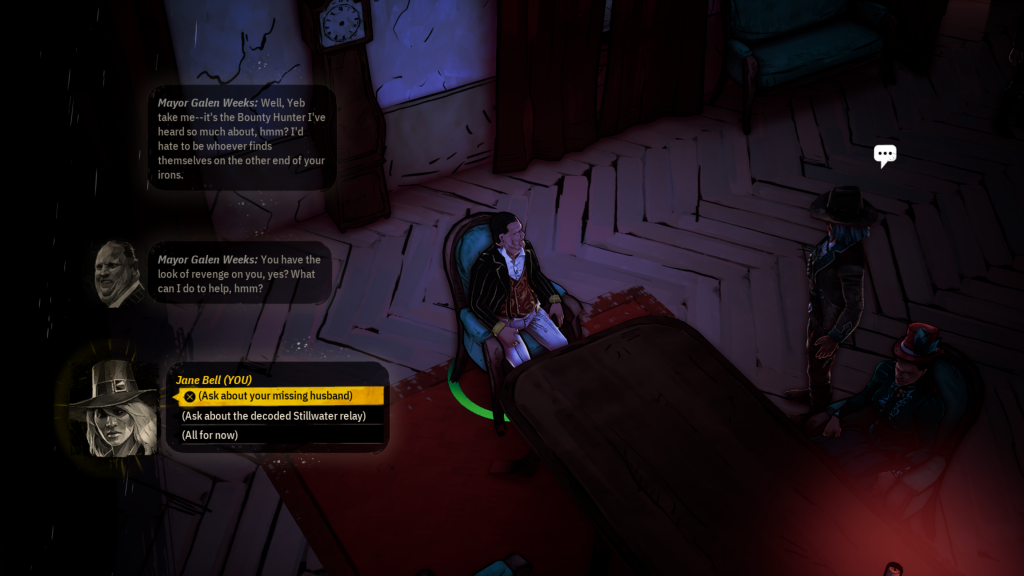 Towns are filled with people but you can only converse with a select few. As well as main objectives there can be side quest givers and shops to visit. Here you can buy goods but also sell what you’ve collected, looted or stolen on your adventure. Good for getting cash but also to clear out your inventory which only has limited space. Different shops will sell different items, with weapon shops, armourers, hospitals and banks all providing specific services. Naturally you can also steal things as long as no one is looking or murder the entire town, even important people, and the game will work around that to allow you to continue the story and creating a Ghost Town. There is law in the West though so expect your reputation to take a hit and spend time in a cell or eat a bullet or ten if you’re caught.

Outside of towns you can freely travel a map but only at specific locations will an area load in, whether that’s marked on the map or a random encounter. If you do encounter hostiles then you have the option to go in guns blazing or take a stealthier approach, or try and then resort to violence when things go pear shaped. Enemies have vision cones on a mini map when you’re sneaking around and you can get up behind them to choke them out and carry their bodies around. A bow and arrow is also silent if you can take someone down in one shot, but even if you go loud not everyone in the map will necessarily descend upon you which is nice. 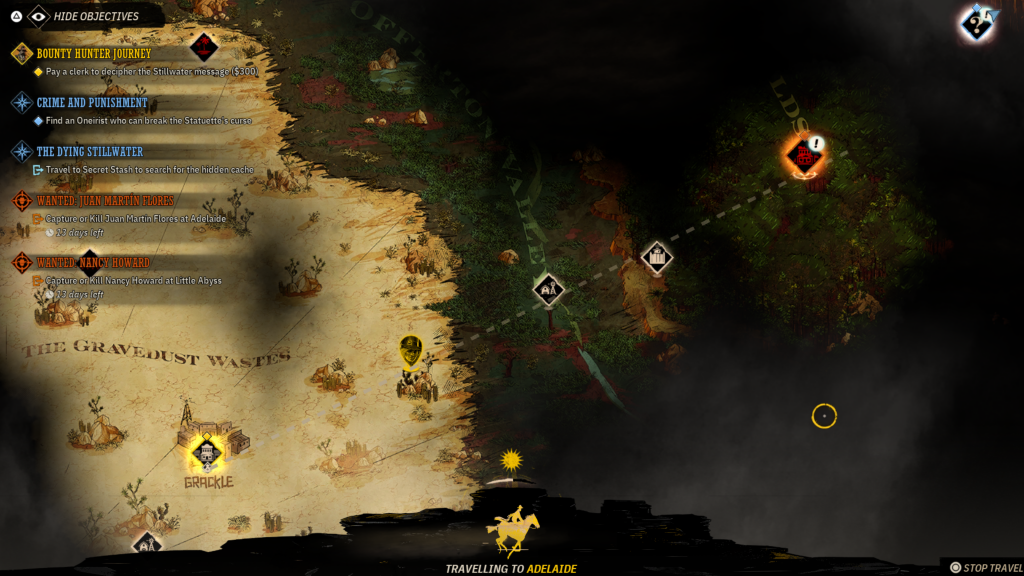 As this isn’t a first person game you don’t get to aim for head shots or anything like that, you can use the right analogue stick to aim in a certain direction and the game will semi-lock on to the nearest target. Being the Old West this isn’t a run and gun twin stick shooter, each weapon has a low amount of ammo loaded into it and fires relatively slowly so you’ll want to pick the right weapon (from a weapon wheel) for the job and make good use of cover and your abilities.

Abilities require collectibles to unlock which you can then spend to acquire special attacks per weapon, like lightning bullets or a silent shot, or character specific abilities like planting a mine or charging down a foe. Although the weapon abilities are the same for each character these do not carry over when you move on but your perks do. These let you sneak faster, jump higher, reload quicker or have more health and are also unlocked with a different kind of collectible. 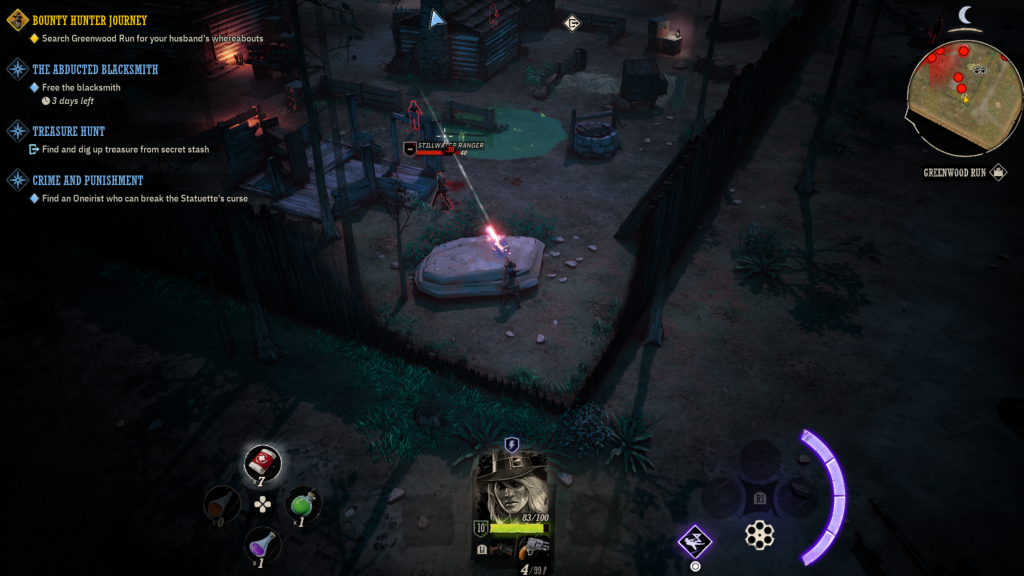 You’ll find them by looking around, either in people’s houses, ‘dungeons’ or out in the wild. Buried treasure can be dug up if you’ve got a shovel on you or ore (used to upgrade weapons) can be mined if you’re carrying a pick axe. You’ll need lock picks to open a lot of chests with the better stuff in them, but doors can sometimes be kicked open or can be opened with a key if you’ve found one. Safes require a lot of lock picks to unlock, unless you happen to have found the combination. Although exploring is rewarded you don’t have to play it like that if you don’t want to. Once you’re in the basic area objectives will become marked and you can brute force a lot of things, but if you’re very thorough as I tend to be then you’ll be rewarded with more loot and maybe an easier time when you encounter certain resistance.

Similarly you can ignore side quests if you so desire, but often helping people will result in a party member (of which you can have two) or a ‘friend for life’. This means if you get into a fire fight they may just turn up and give you a hand. Similarly if you kill someone’s gang leader or lock someone up rather than killing them then they may start a vendetta against you which will involve them attacking you as you roll into town at some point. 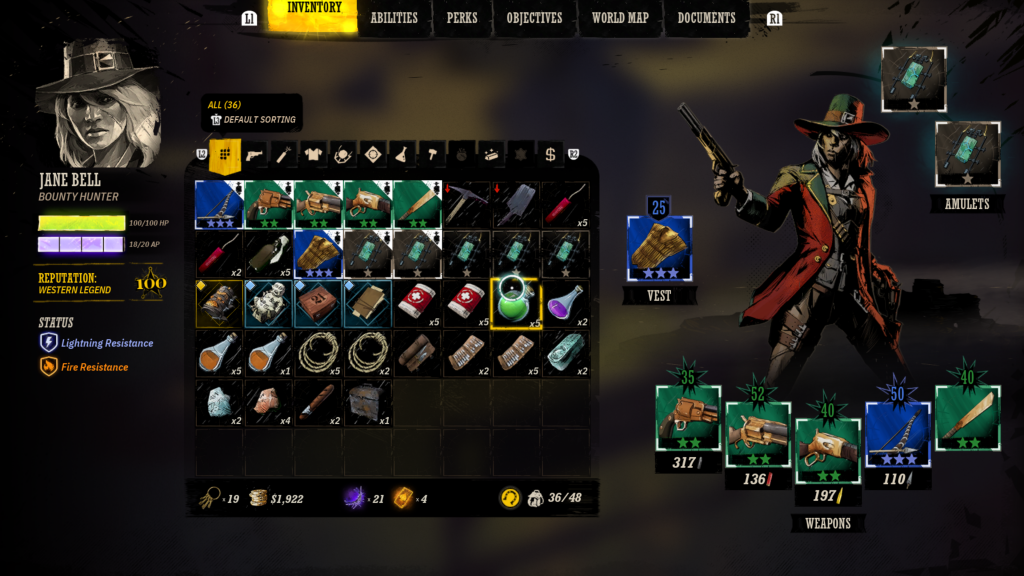 Weird West is full of systems like this that you can ignore or interact with. Another is the weather system which you have no control over but will have an impact. Tornadoes can just appear, throwing objects about, or people, and they can also take on elements like fire if they touch it. Rain will make things wet, making them susceptible to electricity, and filling barrels with life giving water. Again, it’s not something you necessarily have to think about but it’s impressive it’s there.

However, with all these systems does come some jank. You can stealth the majority of the game but the way the enemies move can result in some trial and error. There is a quick save and load option in the pause menu which is very welcome (the loads themselves vary in speed depending on the size of the location) and the game autosaves often enough, but sneaking up behind someone just for them to do a 180 in a split second does undermine it somewhat. In a similar vein your AI partners can’t be spotted whilst stealthing, which is good as they’d be spotted instantly, but it looks really silly when they’re literally blocking a doorway so an enemy can’t get through. Your AI teammates can also get stuck as you explore so when you do eventually get into a fire fight they’re not actually around to help you. 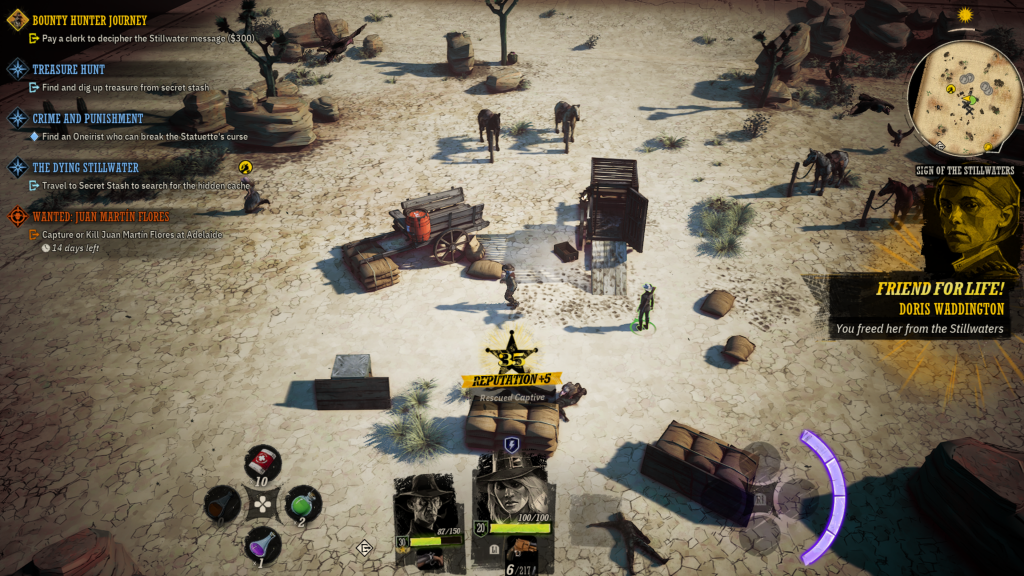 It can also be tricky spotting or picking up specific items. Items only highlight when you are near enough to interact with them so picking up or examining a specific item or body can be awkward. Otherwise the visuals are decent. They’re not going to blow your mind but it’s the systems underneath, like the physics, which are impressive rather than the visuals with environments repeating often. The only voice acting your hear is from a very good narrator who pops up at key story points. All the characters are just text, some requiring you to click through whilst others roll automatically. The music represents the era well though you will hear the same tunes a lot, similar to the visuals.

I’ve purposefully only talked about the first character you play as as things do get suitably ‘weird’ pretty quickly afterwards and each character has a story with choices to be made. At the end of each chapter the game will list all your key decisions so you can be sure to do the opposite on subsequent playthroughs but the game is quite long, depending on how much side stuff you interact with, so I don’t think it’s necessarily one you’ll be playing over and over in quick succession. 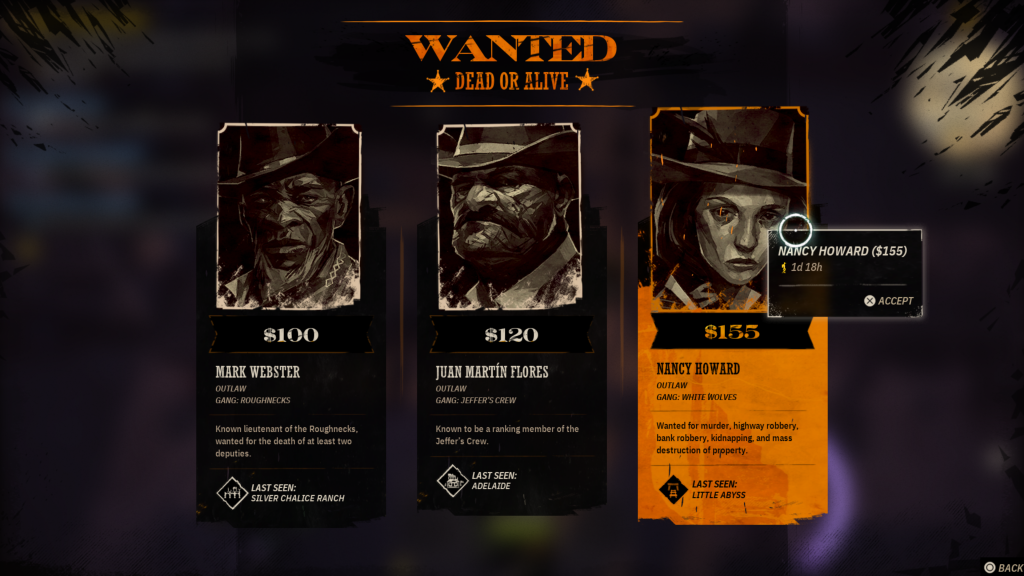 Ultimately Weird West is an enjoyable game with some interesting systems and mechanics in place and multiple stories to discover. Elements like the stealth and gunplay don’t quite work as well as more dedicated games but the powers you unlock and the choice of how you approach each situation are very welcome. Some may find it too clunky but it’ll appeal to a specific type of gamer who will get a lot out of it.

Weird West
7 Overall
Pros
+ An interesting setting
+ Multiple characters with their own stories
+ Choices, both in story and gameplay approach
+ Lots of systems and mechanics to think about, or not
Cons
- Stealth and gunplay are a little clunky
- Environments can get repetitive
- Lack of voice acting does detract from the characters a bit
Summary
Weird West has a lot of interesting systems working under the hood to let you play as you like. With this comes a certain amount of jank which undermines the immersion somewhat but the multiple character stories and many choices still make it worth playing.