I know games sometimes like to cover civil unrest, protest and it’s consequences but they largely don’t concern themselves too much with ethical quandaries behind the curtain. There’s always a greater good and the good guys usually win out. Vengeful Heart has a fairly obvious cause to fight for but it’s interesting to see how this visual novel from Salmon Snake delves under the surface to at least show the pressures involved. 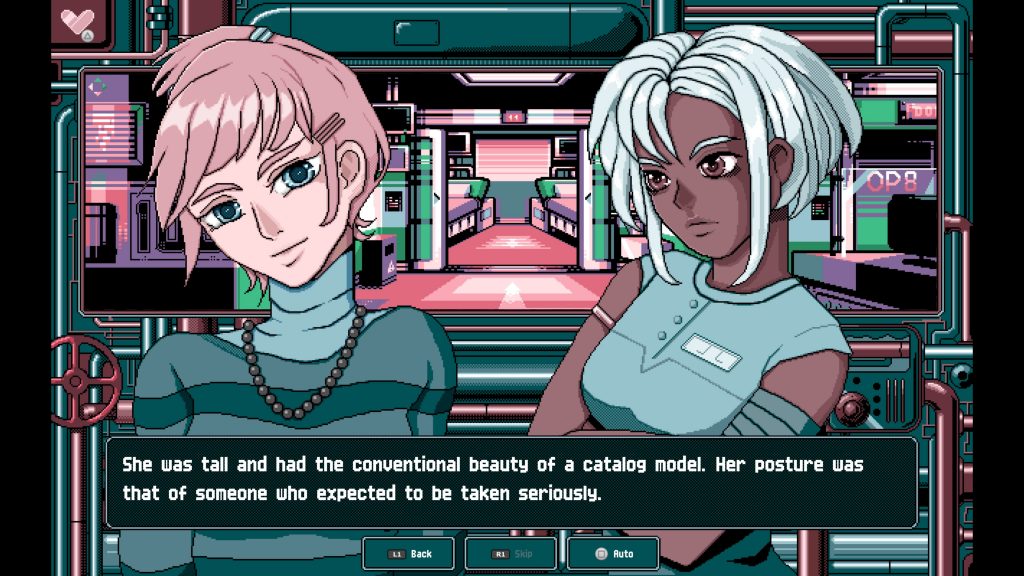 Vengeful Heart‘s plot is one of activism and the consequences thereof. Josephine Lace begins the take as an engineer of Nephys, a water company who holds a monopoly on the city’s supply. She sees the corporate world she’s in and gets a glimpse of the top table. Francis Brabeck is her boss and, whilst he is careful to say the right things and spread the right message, there’s more malevolence to his demeanour than he lets on.

This introductory chapter culminates with a violent act of civil disobedience. Josephine’s apartment complex has had their water supply cut off which leads to dozens, if not hundreds of people without a basic utility. In her first act of subterfuge, she teams up with Rani, a military officer and breaks the pipes. Nephys sees this as theft and then swiftly moves in to detain the residents. Whilst this is going on, the eyes of the media take notice, although their message is hampered somewhat by obvious interference. A week of disruption ends in a bloodbath with our heroine now declared dead. She’s kept sustained, however by an artificial heart. As the title suggests, she is out for vengeance.

As Josephine plans her response, she puts together a group of like-minded activists to put Nephys in their place. They come from varied backgrounds from Rani and Bob’s obvious muscle to Amy’s academic background. Norbert is a doctor who’s ‘do no harm’ ethos is ever present in his motives and Josephine is there as someone with intimate knowledge of Nephys as an organisation. 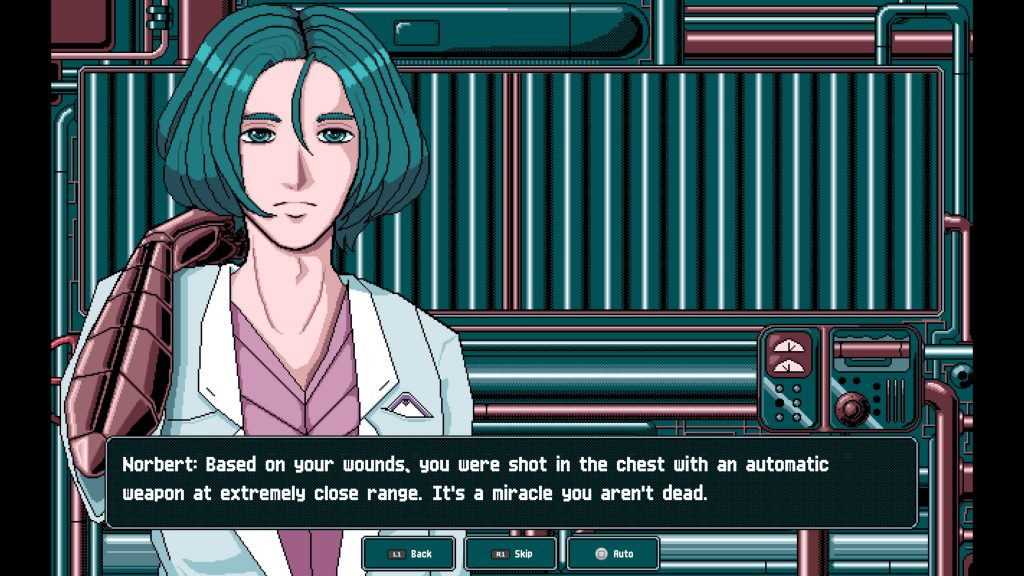 It’s a good group with clear motivations and each can share their input on how best to damage a monolithic machine. I did wonder if this was going to take a more idealised look at protest and unrest but, to the game’s credit, the murkier elements are touched upon and pondered. The team is cohesive and, whilst disagreements do happen, they hold together for the greater good. It’s wholesome but definitely doesn’t shy away from the obvious problems any movement would face.

At its heart, Rani’s more guns blazing approach is often at odds with Norbert’s need to care and protect. It’s not such a binary choice although the game’s one and only decision point does boil it down to that. It’s a shame as the unit is close enough without giving us a romantic partner to settle one of two endings. It seems unnecessary and crass, particularly when it solves the love triangle that brews an act before. It’s too convenient.

It’s a shame the gameplay is so passive, even for a visual novel. The one decision you make feels like an afterthought when these two have been conflicted throughout the tale. Giving the player the option to shape their response might’ve branched the story out in some interesting ways. Perhaps even failure could’ve been an option. As it is, both endings feel like minor tweaks on the same conclusion. 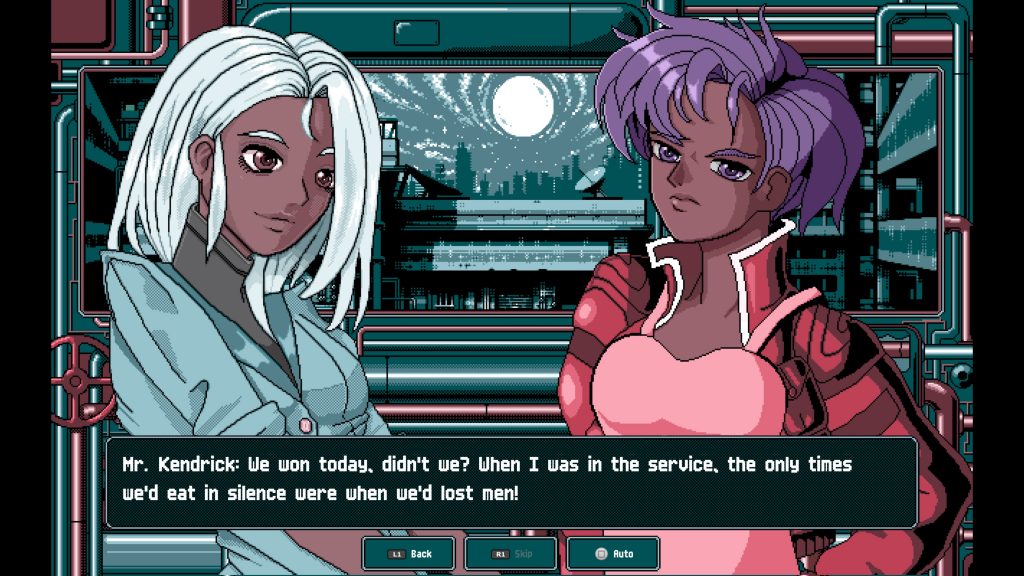 I also wish Francis had a bit more nuance to him. He does hide his motives behind some good public relations but his ultimate goal ends up being a bit too textbook corporate evil. Odd, considering he also pines after Josephine as a love interest. She’s all too keen to jump on that proposition until the early turn.

The pixelated, neon look of Vengeful Heart doesn’t work for me. It reminds me too much of the Amstrad CPC games of my youth and it looks unsightly at times. It does a good job of portraying the piped dystopia but I can’t cast a gaze on it for too long. The electronic shutters being used for scene transitions is a great touch but overall palette just isn’t pleasing.

The character portraits are fine. They’re stylised in an anime style and it is nice to see costume changes in a visual novel, even if they don’t remain consistent. Rani uses her uniform throughout and her donning an apron for cooking scenes looks suitably charming and daft. These do come off as largely static. Josephine has a few expressions she cycles through but nothing that really grabs my attention.

I’m disappointed only the main cast gets the luxury of a face. There are some late game side characters that get quite a bit of text to them. Unfortunately, they’re relegated to a name and nothing more. Some of them are quite pivotal to the plot and it’s a shame they’re so faceless. It would help bolster the cast and make some of the more emotional scenes resonate more. As it is, interactions are limited to checking on Josephine’s heart rate. It would add pressure to some scenes if I had some influence over it. 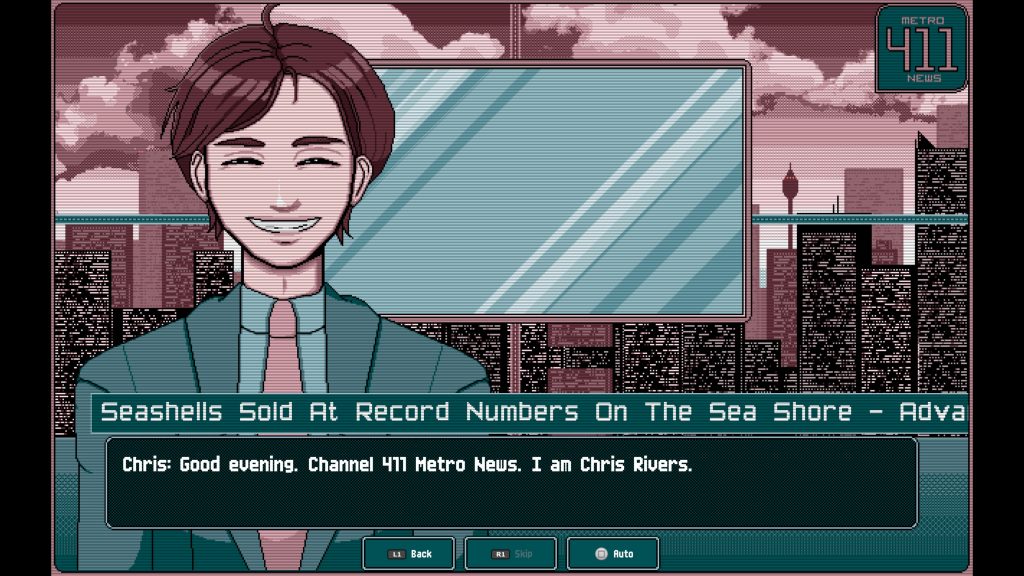 Aside from the plot, the music works largely well. It doesn’t take a genius to put synths together with cyberpunk but the score fits with the action nicely. At times it’s moody, adds to the tension and compliments the action well. Unfortunately, it does feel like a short album on shuffle and repeat. I wouldn’t call it jarring but sometimes the scenes and music don’t quite mesh.

Despite these little problems, I was at least kept interested in Vengeful Heart. It’s not much to look at but the moody music and the surprisingly layered plot did hold my attention. It’s nice to see a group of do-gooders planning out campaigns of disruption and struggling with the consequences of it. The ensemble cast did well to portray a solid unit that all had their different strengths and input. It’s a shame the player wasn’t given more influence over things but I can’t say I disliked this.

Vengeful Heart
6 Overall
Pros
+ A well-written tale about the triumphs and tribulations of insurgency.
+ A strong cast of characters.
+ Well structured with each chapter covering a new objective for the crew.
+ Quality music that fits the moody universe.
Cons
- The villain of the piece is a little one-dimensional.
- Some side characters aren't given the attention they deserve.
- Incredibly passive with barely anything for the player to decide upon or interact with.
- The colour palette and pixel art just does not work for me.
Summary
Vengeful Heart's tale of disobedience in the face of corporate greed is one that's dug deeper than I expected. It's not much of a looker with a pixelated style that just seems too harsh for my eyes. I spent most of my time concentrating on text scrawls that really helped portray a group of friends struggling to topple a juggernaut whilst wrestling with their own ethics. Some aspects feel undercooked but there's an interesting narrative, if you don't mind being a bystander in all of it.