Void Gore is the latest in the ever-growing line of retro-inspired shoot ’em ups from the prolific stable of Eastasiasoft.  Their relationship with Panda Indie Studio has produced several games so far such as Null Drifter, Red Space and two Project Starship games and this one shares plenty of DNA with those games.  If you’ve dabbled with Panda Indie’s stuff before you’ll know what to expect.  Short but enjoyable blasters with ‘interesting’ visuals and a bit of a DIY punk aesthetic.

Indeed, this is another vertically-scrolling shoot ’em up and, as with all of its stablemates, it has a twist to the controls.  Aside from the basics (you move with the d-pad/left-stick and shoot with

), the only wrinkle to the gameplay is that when you press

, you’ll clear a circular area around you.  Any bullets in there when you activate it will be gone and you’ll damage enemies in that circle too.   That’s pretty much it when it comes to core gameplay mechanics apart from a score multiplier that you build up when you get kills in quick succession. 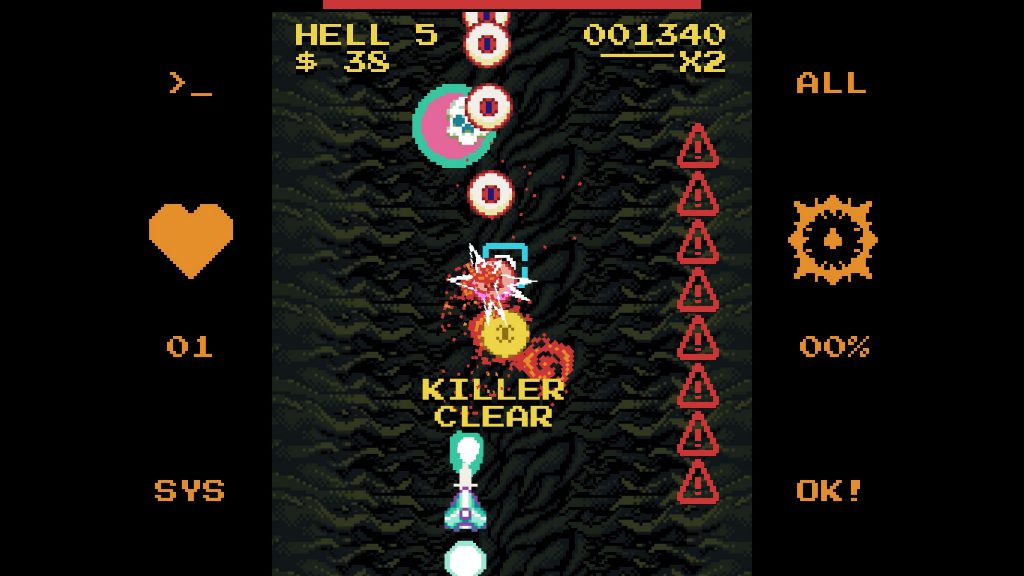 If that doesn’t sound like much, that’s because it isn’t and that’s the story with Void Gore.  The game has some stuff going for it but also some fairly obvious weaknesses.   The biggest problem is that the game is just an unending sequence of procedurally-generated levels that all look and play the same.  You’ll see some skulls, which are your basic popcorn enemies, and some weird balls-with-teeth things that take a few more shots to dispatch.  You’ll also get a bigger enemy, more a sub-boss than a meaningful boss, and that’ll take a few seconds more to destroy.  You’ll may be get one or more of each type of enemy and then you’ll be onto the next stage.

The next stage, and every one after it, will just be that until you get bored or die.  Even by the most forgiving budget shoot ’em up standards, that’s not much gameplay to really hang a game on and it is pretty evident early on that this isn’t a game that will provide even days of entertainment. 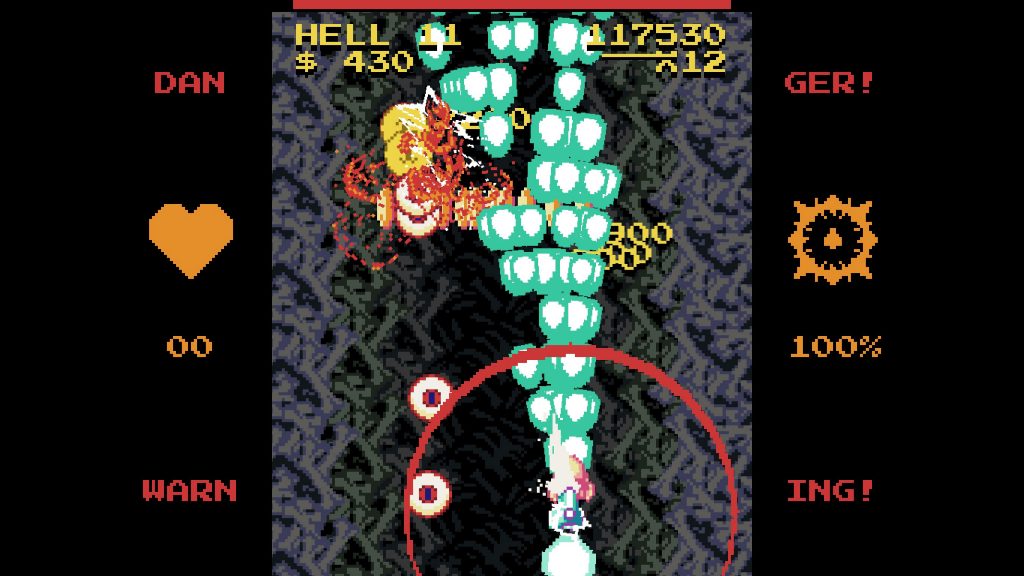 But it’s not all bad.  Void Gore does encourage some replayability with its upgrade system.  You start off with a pretty weedy ship but enemies will drop coins and you can spend these between games on permanent upgrades such as more lives, a more effective clearing circle and improved firepower.  Initially, you’ll take a bit of a beating thanks to the weakness of your ship and the sometimes unfair trajectories of some enemies (expect to get blindsided pretty often) but you’ll become more competitive.  You can also earn upgrades during gameplay but these are lost when you die but they do have the effect of rewarding you for surviving for longer.

By the time you get to level 12 (the last meaningful level as that’s where you’ll likely pop the game’s Platinum), you be quite formidable and so are the enemies at this point so the game does get quite exciting.  Beyond that point you’ll just be playing for leaderboard position but we were glad to see a leaderboard at least. 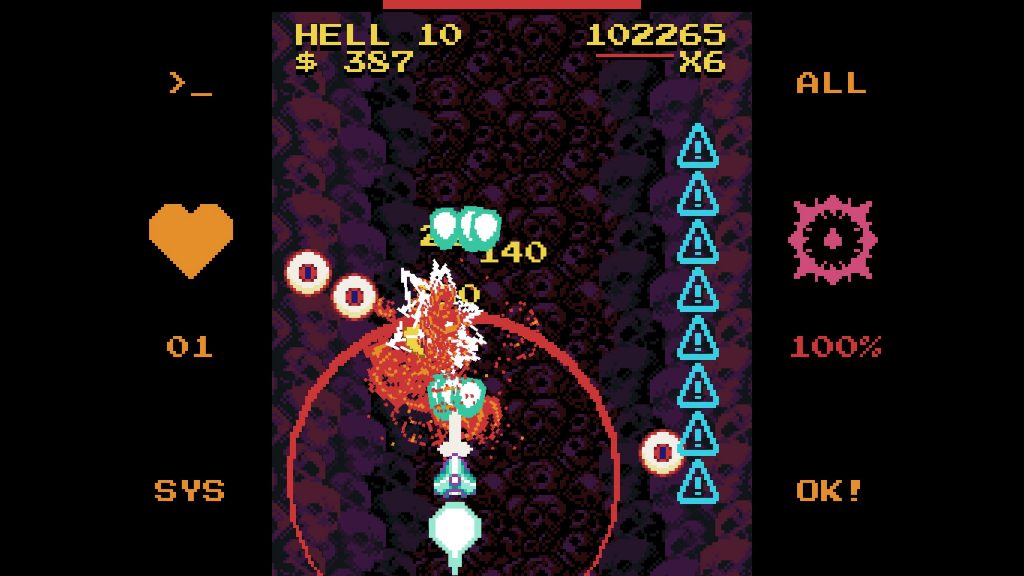 Panda Indie have long since been using a confidently primitive graphic style which can really only be described as 8-bit in execution.  Sometimes it works, mainly in the Project Starship titles where it was married along with a bit of eccentricity but here the design work is very staid.  The levels themselves have no interactivity, direction or detail.  You’re just moving up through an infinite path that never changes.  There’s also no change between levels but there are eight different colour schemes but you select these before you play and then you’re stuck with just one until you get back to the main menu.

It wouldn’t be so bad if this facilitated a really useful visual style but the gameplay is often a little unclear.  It’s 2021 and we don’t expect to die from things we couldn’t see in time.  If it’s not an enemy sneaking up on you, it’s the fact that enemies take a second or two to disappear when destroyed which can clutter the screen a little.  That’s not great but really the problem is that the game is just a bit too generic looking to forgive being this ugly.  There’s a fine line between looking retro for effect and looking retro because you’ve not got a good designer on board. 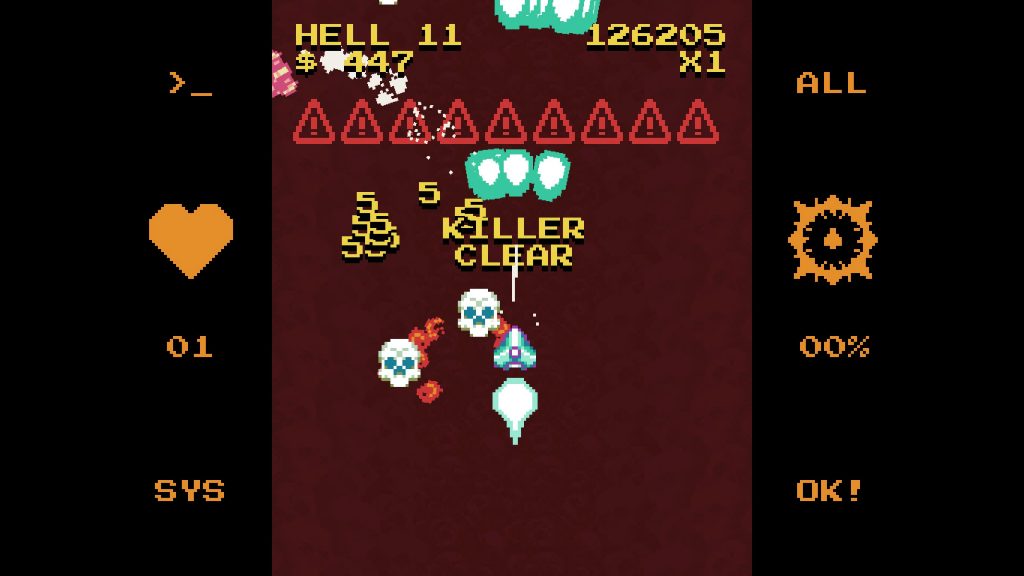 So it’s a bit of a mixed bag but ultimately while the game’s shortcomings really kill its long-term appeal, in the short term it’s actually rather fun.  The upgrading system helps but, as with all of Panda Indie’s games, you will get better at the game too and before long you’ll feel as though it’s not just the upgrades making you better.  Also, while the game, as per most of these Eastasiasoft shooters, is a very easy Platinum you will need some skill to nab the game’s last two trophies.  We prefer a little resistance and the game does well to not make things absurdly easy.

It is what it is.  Void Gore is fun for a while, the core gameplay is fine, but it feels like it was rattled out in an afternoon.  It’s cheap, it’ll give you a Platinum and the upgrade system is pretty compelling and that’ll be enough for a lot of players but PSN is home to some really good shooters now and this one can’t really compete when we’ve got gems like Ginga Force and Soldner X2, both of which were released not all that long ago.

Summary
Void Gore is an okay shoot 'em up but one that is let down by some lazy/minimalist (depending on how kind you're feeling) level design and clumsy visuals. We enjoyed it while it lasted but that wasn't very long.