We only just reviewed Ginga Force, a shoot ’em up from genre specialists Qute Corporation and now here is the sequel.  Natsuki Chronicles shares much of the same DNA as its prequel.  It’s a shoot ’em up, it features a cast of Anime-inspired characters (some of which are returning from the previous game) and you get a lot of weapons to purchase, upgrade and try out.  The games also share a similarly taxing level of difficulty and a nice system where you accrue extra shields that are specific to the game’s individual stages, essentially helping you out as you crash and burn pitifully time and time again.

The big difference though is that Natsuki Chronicles makes a shift away from Ginga Force‘s vertical aspect.  Yep, this time we’re going horizontal which, when combined with the modern visual style, gives the game a similar look and feel to games like R-Type Final, G-Darius and Gradius V.  As before there is a plot but the majority of it happens during the action and we don’t speak Japanese, so let’s focus on what really matters: that sweet, sweet shoot ’em up action. 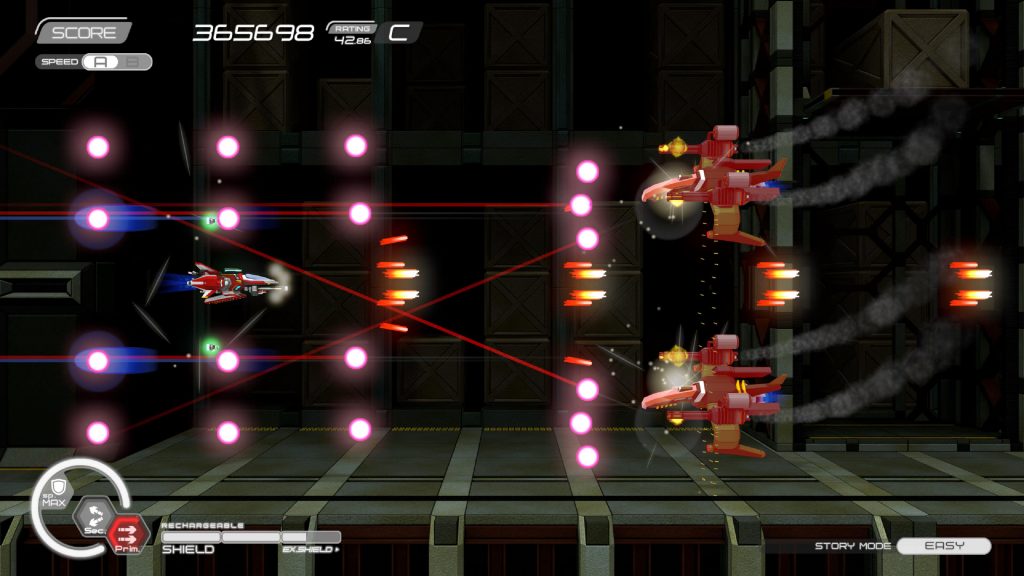 A series of brief tutorials introduces you to the game’s main mechanics.  As per usual you’ll be moving around with the d-pad/left stick and you’ll have three weapon systems to play with.

fires off your primary forward-facing weapon, while

controls the rear-firing secondary weapon.  A clever system means that you can either focus your fire on one or the other but if you use both together, their power will be reduced.  So you’re balancing power with coverage essentially.  It’s a simple but nuanced system that means you won’t just be holding down one fire button for the whole game.

You also get an ‘option’ (mapped to

) which is mainly defensive (although a variant does allow a more attack-based homing weapon).  Also, as per Ginga Force,

can be employed to change your speed (albeit with less options that the previous game).  Eventually, after three tutorial stages, you’ll get to the main game where you’ll face off against ten stages of familiar shoot ’em up action with each stage having a boss battle.  There’s nothing here that shoot ’em up fans won’t have seen before but where Natsuki Chronicles does well is in its execution of these well-worn concepts.

The action is well-paced and well-balanced.  You’ve got plenty of firepower at your disposal and a good number of enemies to take down with it.  The game does well to avoid making the levels themselves an obstacle too with the main threat coming from enemies and bosses rather than layouts that need memorisation.  Things do get tough though.  Even on Easy, you’ll soon find yourself outmatched thanks to the more durable enemies that show up but thankfully Natsuki Chronicles gives you the ability to increase your offensive capabilities. 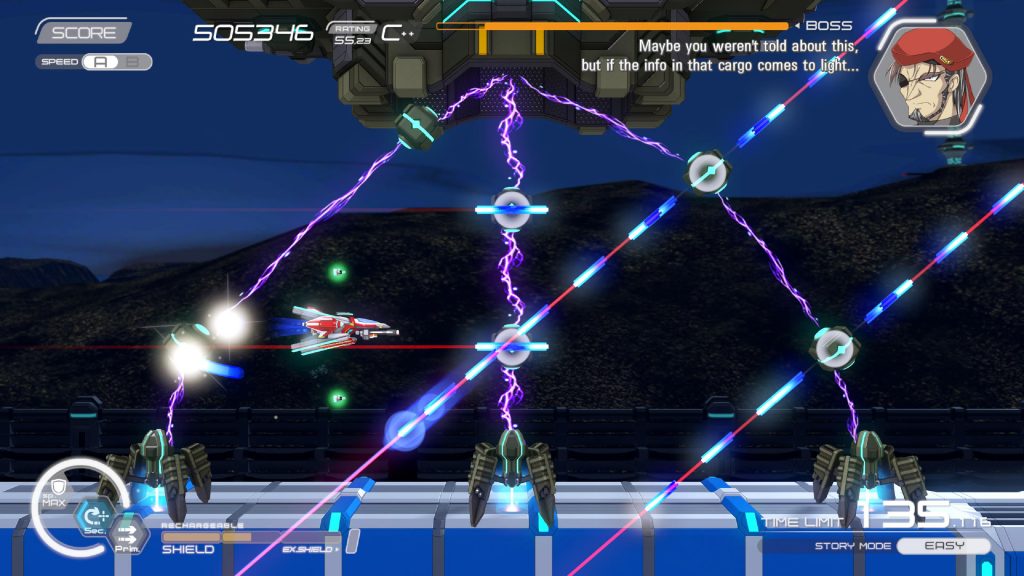 Credits earned during gameplay can be spent on weapons and these will make you more effective.  There’s a good range of them too from basic guns, spread firing, lasers,  mega-lasers, homing rockets and various other types so you’re sure to find a build that works for you.  These aren’t all available for purchase right away though.  They are unlocked by increasing your overall experience or level experience.  The latter grows as you take on an individual level over and over.  Aside from unlocking weapons, this also gives you extra shields for that stage only as we said before.

This makes for a nice, rewarding upgrade system that really pays off when you get the next level of your favourite weapon or just find a new favourite.  We found that certain ones worked better one specific stages too, so it’s worth experimenting if you get stuck.  Indeed, while we found Ginga Force very tricky to get through, Natsuki Chronicles was a bit easier.  Still very challenging, sure, but the weapon layouts really did help us out in the end. 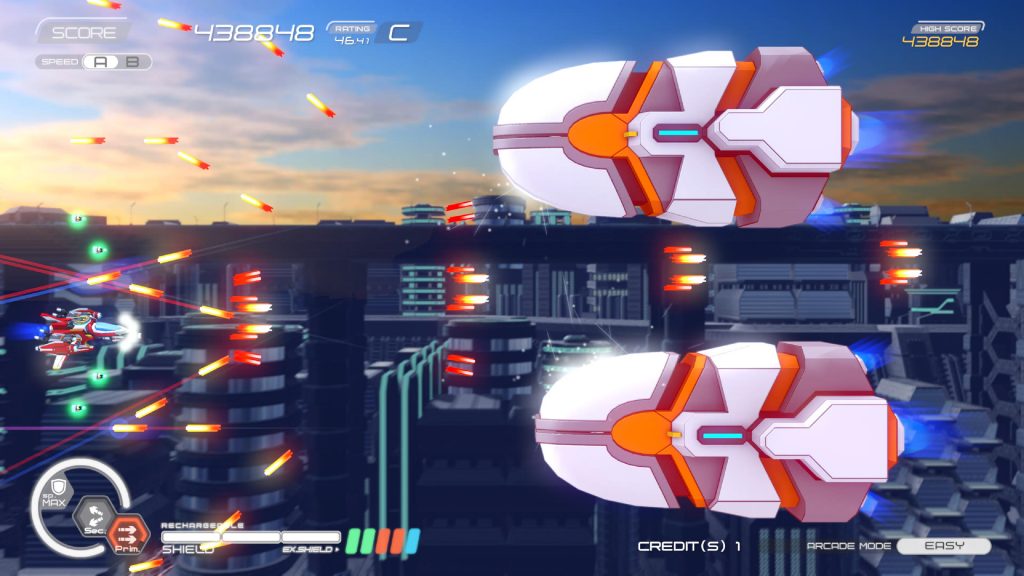 Although the game only has ten stages, you are encouraged to beat them on all difficulties which is a nice way to grind money and experience if you get stuck on a particular stage.  When we got stuck on level six on Easy, we went back to level one on Medium to continue our progress.  Eventually we got the right upgrade to allow us to continue.  And whilst the game is taxing, it doesn’t spike as hard as some shoot ’em ups.  You won’t be fearing your next boss encounter quite as much as usual with this game.

Of course, if all that stuff sounds a bit too in-depth, you can just play the game’s standard Arcade mode where you get a preset load out and have to earn upgrades on the fly.  This mode feels a bit more immediate than the main Campaign Mode option but we preferred all that upgrading (even if it did come with the annoying story-driven voiceovers).  Either way though, shoot ’em up fans are well-catered for. 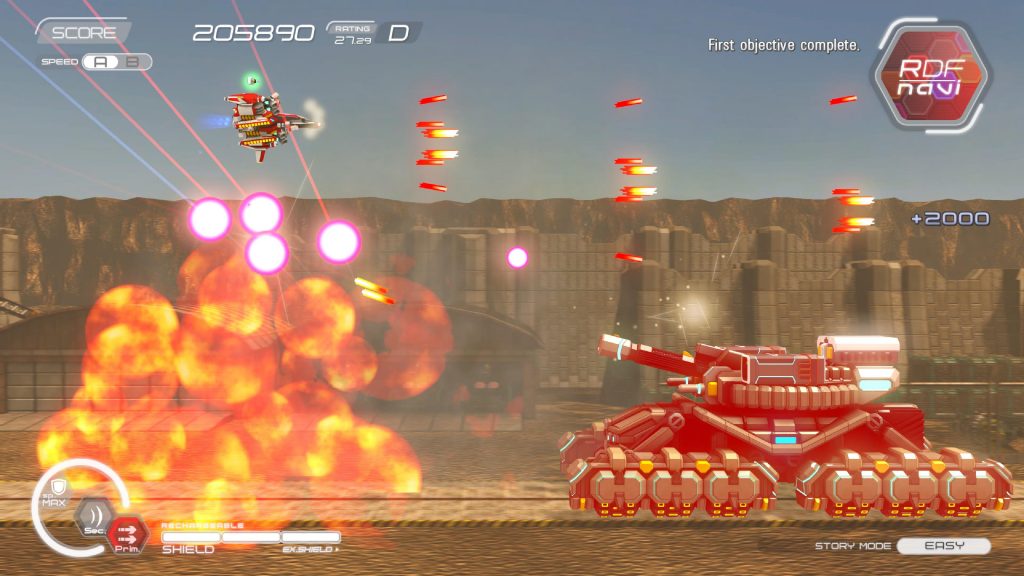 As with its predecessor, the game has a modern presentation style with 3D visuals and an intense soundtrack.  It won’t blow you away but the game’s nice clean modern look works well, arguably better than Ginga Force (which had some very minor clarity issues).  We’d have liked a bit more eye candy and it does sometimes feel as though the ships on screen don’t feel part of the levels they are in but overall there’s enough action going on that you won’t need to criticise the game’s looks.  We wouldn’t even have mentioned it but we’re reviewing the thing so what can you do?

We liked Ginga Force a lot but then we’re suckers for quality shoot ’em ups and we’ll continue to champion them.   We like Natsuki Chronicles more though.  It’s exactly what we want from a shooter.  It’s fun, addictive, explosive and in-depth without being too fiddly.  Again, the game’s difficulty might put off some but this is a bit more accessible than its prequel and is worth persisting with.  Qute Corporation have done it again and we can’t wait to see what they do next.

Natsuki Chronicles
9 Overall
Pros
+ Great shoot 'em up action
+ Good upgrading system
+ Decent presentation
+ Rewards practice without too much memory testing
Cons
- The plot is mostly yelled in Japanese during gameplay
- Might be too taxing for some
Summary
Natsuki Chronicles takes the high quality shoot 'em up gameplay of Ginga Force, flips it ninety degrees and delivers a great shoot 'em up with a rewarding upgrade system. Newbies might struggle a little but genre fans will have a blast.