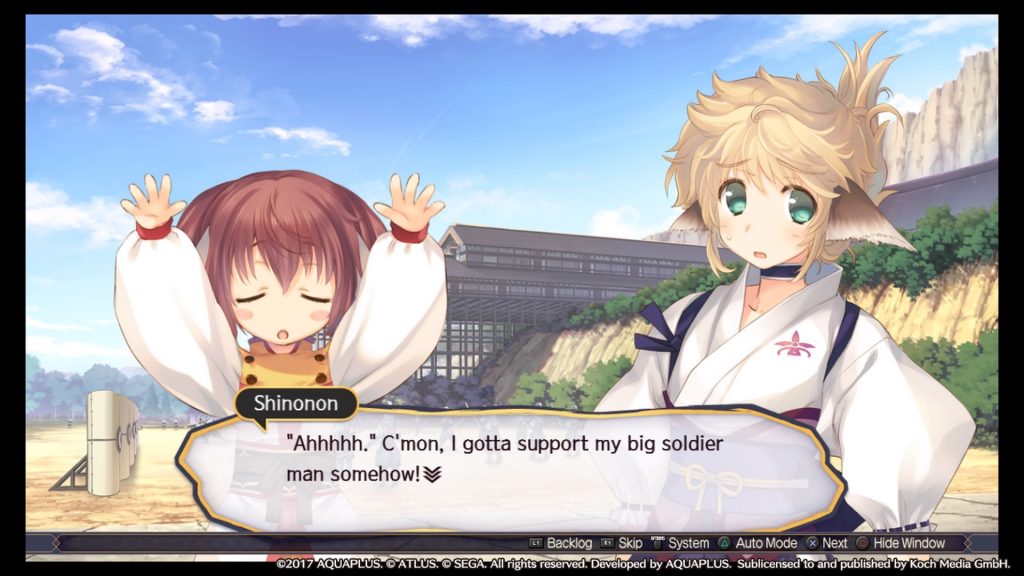 I don’t want to talk about the story really as to not spoil the events of the last game if you read this and are interested in going back. If you jump straight into this one then you will probably be able to get up to speed but you’ll be missing out on a lot of character development, which is one of Utawarerumono‘s strongest points. If you have finished the last title then this follows on from the end of that as you’d expect, which takes things in a different direction early on.

This means more battles from the start. Both games are primarily visual novels, the majority of your game time is going to be spent pressing cross to read through dialogue and, as before, this is well written with interesting and fun characters. Voice work is in Japanese only but is of a high quality. However every now and then there will be a strategy RPG battle and again if you played the last game there are few surprises here. 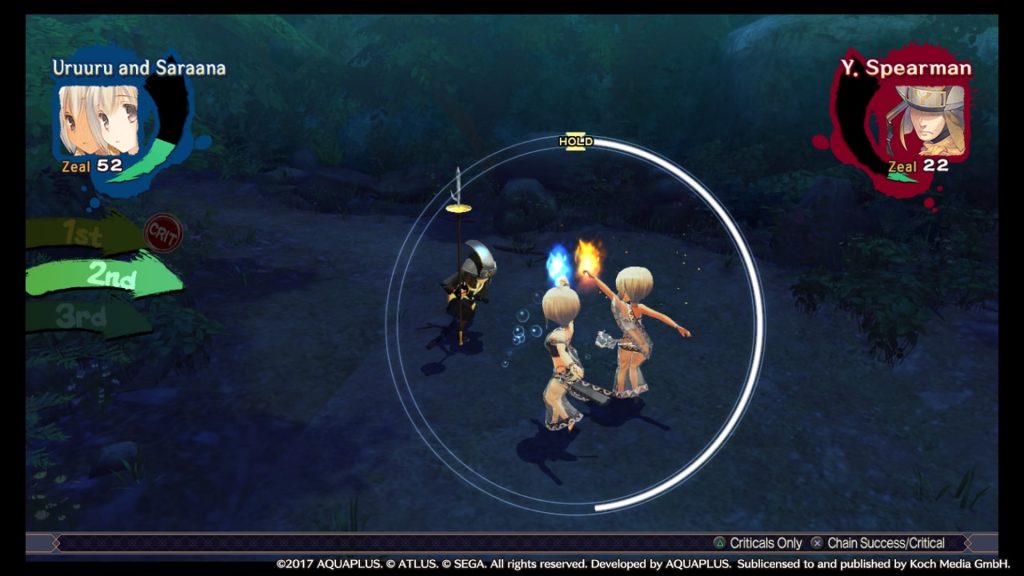 The battles themselves are pretty basic, with the ability to rewind up to fifty turns allowing you to experiment without risk of being punished. Good timing on some button prompts allow for critical hits and a zeal meter increases, buffing your character for a brief time when full. There are some new additions however, though you won’t see them for a while. Co-op attacks are exactly how they sound, combining the powers of two characters, whilst new modes allow you to test your strategy in trials and pit two teams of your own characters against each other in a mock battle to gain more experience.

In my original review I said that the battles were few and far between, here that’s slightly less true in that there are more battles and the pace of the game in general is better, but you will still get portions of the game where you are reading for hours before any action happens. If you’re a fan of the genre then that’s what you come for and won’t be a problem but if you got frustrated at characters talking in circles and scenes lasting for too long with little point to them in the last game then know that that is still the case here. 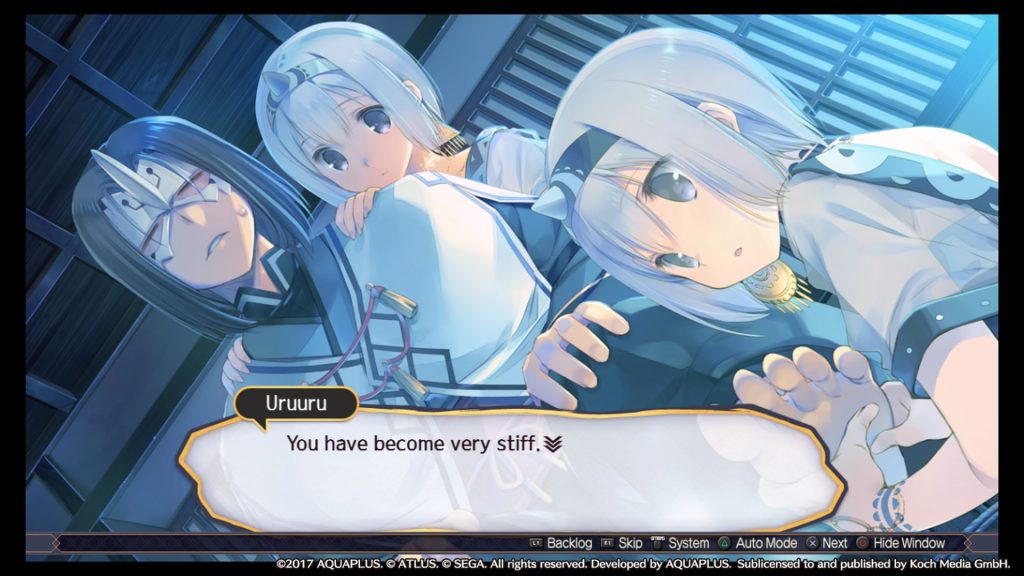 As is the game’s approach to its female characters. Utawarerumono has roots in the adult visual novel market and although being on PS4 and Vita means that they can’t be too explicit there is plenty of fan service and innuendo in both titles. Tame in comparison to some Western titles but just be aware if you’re easily offended or put off by such inclusions.

Those specific scenes are very well drawn however, as are any other scenes that get their own illustration. Characters get a few different 2D poses in the normal conversational scenes which are also well done. The 3D battle engine is less impressive, with simple character models and terrain. Looks nice stylistically but is not to the standard of the 2D work.

On the whole I actually enjoyed Utawarerumono: Mask of Truth more than Mask of Deception. I found the pace to be better, though not perfect, and the more frequent battles meant I was more invested in my character’s progression in that department than before. It’s still a visual novel first and foremost with a strategy RPG system that rears its head every now and then so be aware of that, but being reunited with these characters was a pleasant experience and confirms to me that it is in the writing that Utawarerumono shines. 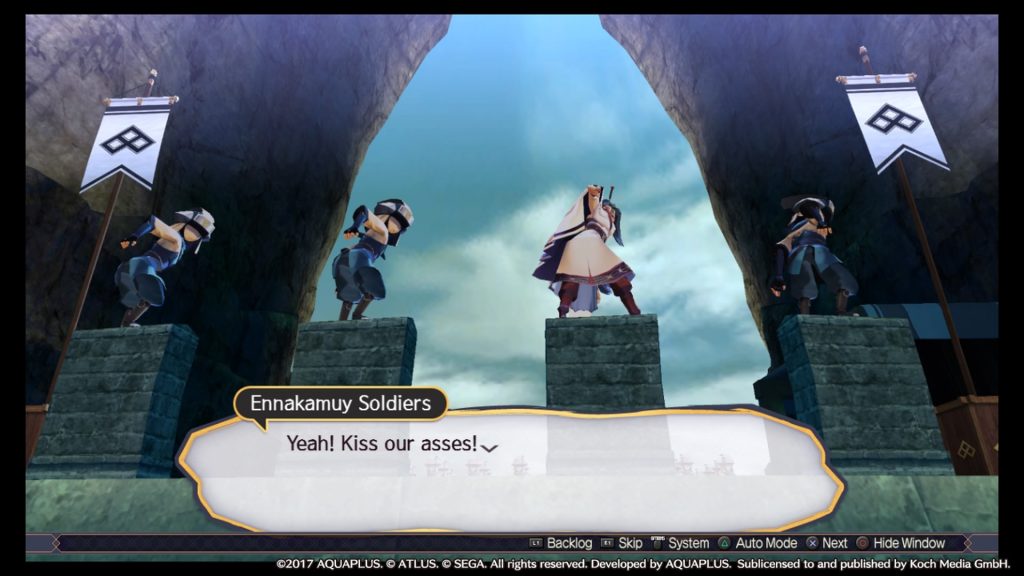 Do I recommend this? I can’t tell you to play this if you’ve not played the first, I just don’t see the point. If you’re interested know that it’ll be some time investment, with both games adding up to over a hundred hours of, mostly, passive reading, but if you’re a fan of the genre and you’ve not tried it then I suggest going back to first and know that the follow up is as good, if not better.

Utawarerumono: Mask of Truth
7 Overall
Pros
+ Very well written and likeable characters
+ Great character portraits
+ Better pace than the last game
Cons
- Can still have hours of little happening
- Should definitely play the last game first
Summary
Utawarerumono: Mask of Truth closes out the visual novel's story for those who played Mask of Deception. I wouldn't recommend you start with this title but for those who are already invested know that this is a great continuation with some minor improvements.