Some games are complicated to explain, others are very simple. Some games are stupidly long whilst others are incredibly short. Underland is both simple and short but that doesn’t necessarily make it a bad game. I’ll run you through the situation and you can see if it holds any interest for you. 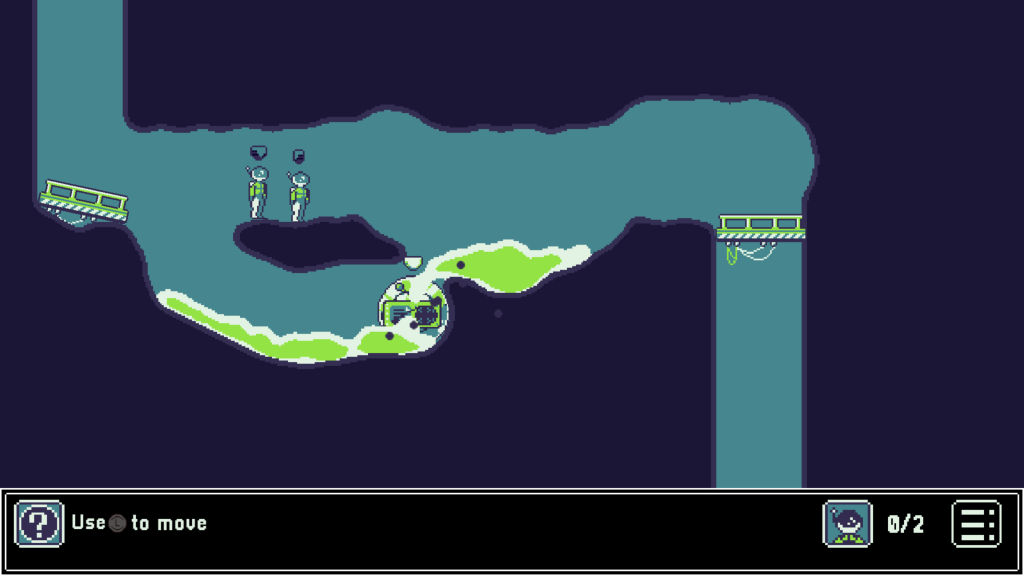 There is a very brief story. You control two astronauts who have landed on Earth after looking for a habitable planet. The surface is no longer habitable so everyone has moved underground and you must spend thirty levels digging down into the base. It’s just an excuse for some simple puzzles.

Each level is a single screen, so you can assess what needs to be done before moving. There will be certain elements on the screen you can take control of, distinguished by an arrow overhead. You can flick between what you’re controlling with the shoulder buttons and whatever is highlighted is controlled using the left analogue stick and an action is performed with the 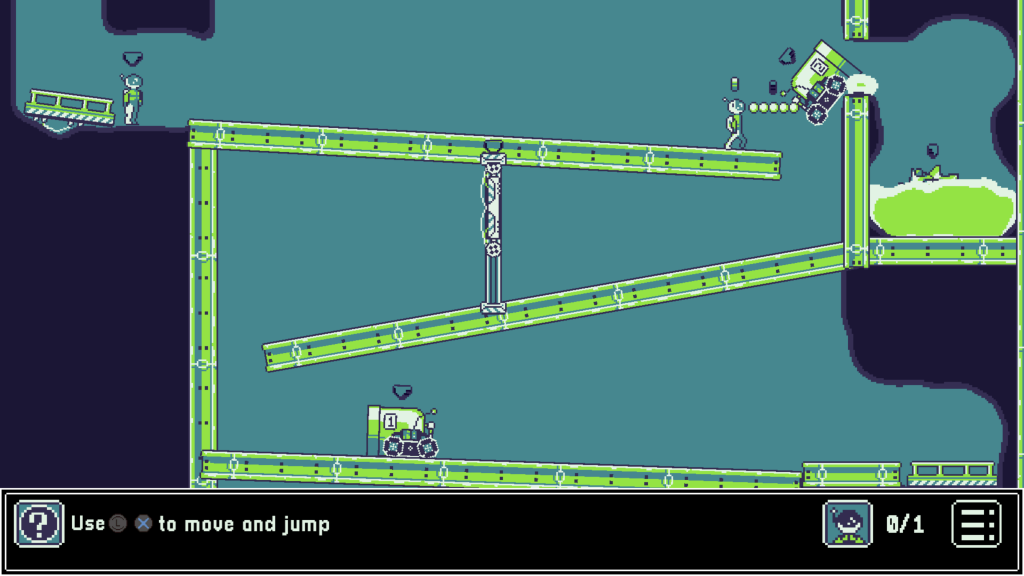 Every level’s goal is a lift but it varies whether you need to get one or two astronauts to it in order to finish the level. As you are underground the lift is generally under some soil or behind a wall and so you must clear the way for your astronauts to get through safely. The first object you can control is a mobile saw type thing. This will dig into the soil as it moves letting you create tunnels, though the saw itself is deadly to the astronauts as well. Other tools include TNT on wheels and a cannon. Most tools are for carving a way to the exit, though there are floating platforms you can control at times as well which let you get across gaps or to higher ground.

Hazards are also introduced steadily. Pools of acid or some form of deadly liquid are the most common, complete with fluid physics which means you can move and remove the acid with the right approach and tools. This includes suction devices that remove the acid and deposit it somewhere else to clear a path. Apart from that, beyond your own clumsiness only the odd steam jet is out to kill you. 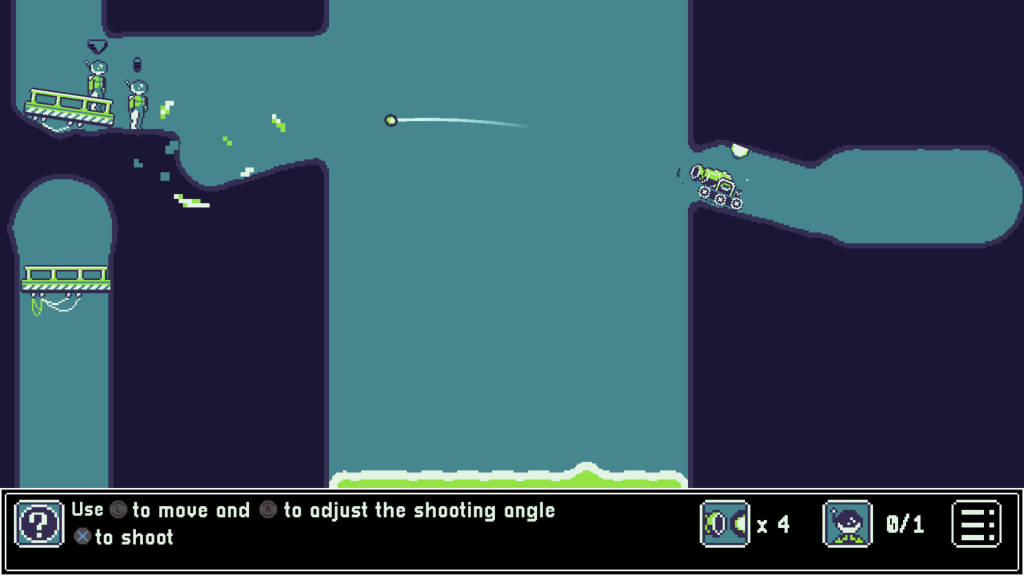 It’s all relatively straightforward, with only a few stages leaving you thinking about what you actually need to do to succeed. Most of the time the struggle will come from actually doing what you set out to do. The controls are consistent but destroying land isn’t an accurate science in Underland so making a hole big enough for the astronauts to fit through or small enough for them to jump over whilst big enough to drain acid can take a few attempts. Luckily the restarts are quick if your astronauts die or if you hit retry from the pause menu.

Visually it’s very samey, though not unpleasant to look at. The fluid physics are not the most realistic here but are always nice to see in action, as is the world deforming. Everything contrasts well and is easily recognisable but the colour palette never changes and the retro style visuals will put off some. Apart from a nice tune at the main menu there isn’t any music during the levels and only some sound effects when selecting what to control and explosions which is a shame. As the game is only thirty levels long, which took me about an hour and a half to get through, the lack of music or variation in visuals never became a major issue, but it could have been better. 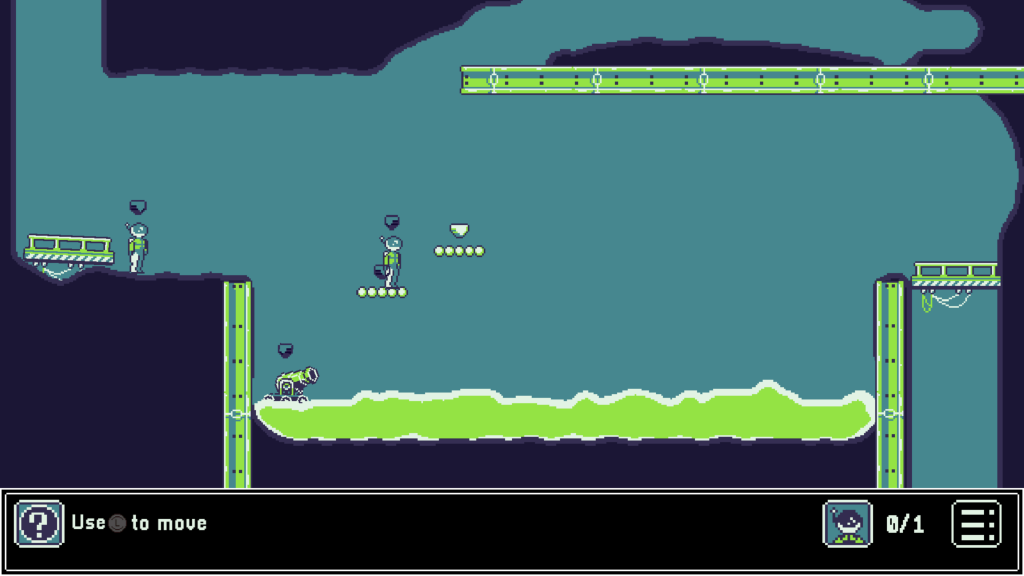 Underland is pretty inoffensive however. The puzzles are straightforward with the controls often getting in the way of you completing them first time but not in a unpredictable way, it’s just something you have to get used to. You can blow through it in one sitting, getting all the trophies for just completing the levels and it’s relatively cheap so if you’re into that type of thing then you can add this to the list of Ratalaika titles you’ve no doubt bought or wishlisted. I won’t remember Underland in a year’s time, but it was an okay one and done experience.

Underland
6 Overall
Pros
+ The puzzle mechanics are enjoyable
+ Cool fluid and terrain manipulation
+ Cheap, easy platinum
Cons
- Over in ninety minutes, for better or worse
- Controls hamper solutions, rather than puzzle difficulty
- Samey visuals and a lack of music
- Ultimately forgettable
Summary
Underland is a short and simple puzzle game which is enjoyable enough but won't leave a lasting impression. The visuals lack variety and having no music doesn't help but the price is low and the platinum straightforward if that's your type of thing.