Gleylancer is a port of a 1992 shoot ’em up that was originally only released in Japan on the Sega Megadrive but eventually found its way onto Nintendo’s Wii Virtual Console service in 2008 where it could be enjoyed by a global audience.  While never being an all-out favourite of gamers, it was always seen as a decent, solid title but one that we’d never had the pleasure of playing.  Thankfully, Ratalaika Games have decided to put out an enhanced port for us all to check out.

On the face of it, this is very much what you’d expect from a console shoot ’em up (as opposed to an arcade one).  You play as Lucia, a young pilot who has to pinch the titular ‘GleyLancer’ ship when her father, an Admiral in the Federation Navy, is captured by aliens in the worryingly not all that far off year of 2025.  This translates to exactly what you’d expect:  one ship taking on a whole army of alien bastards in space. 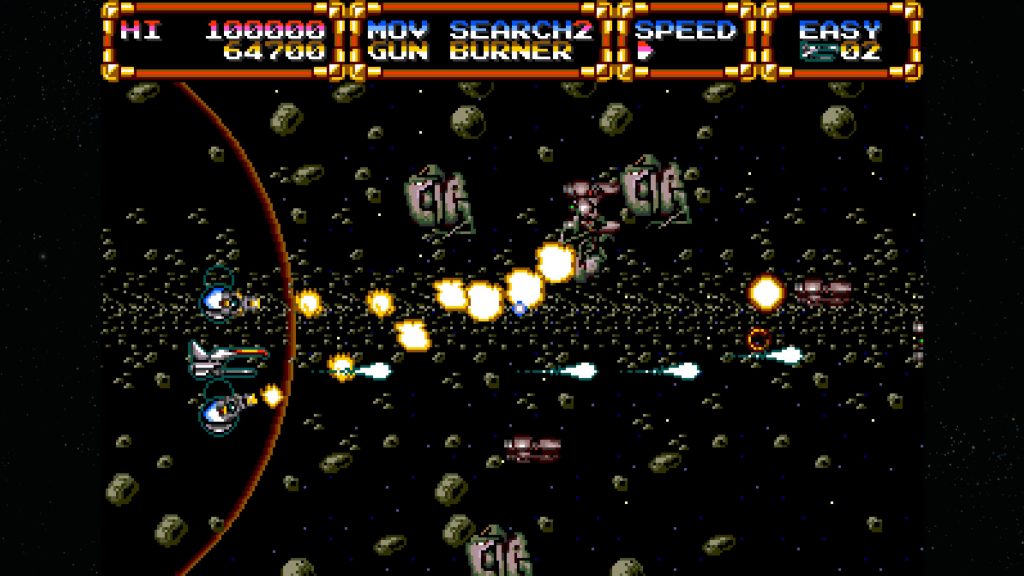 With the standard left-stick/pad for movement and a face button for shooting, the core gameplay mechanics are that of a typical horizontally-scrolling shoot ’em up like R-Type or Nemesis with the overall feel of one of those games rather than a bullet-hell approach.  Instead of being shotgunned by hundreds of bullets, you’re more likely to be blown out of the unfriendly skies by a well-directed bullet to the cockpit.

But before you can get started with your mission, you need to configure your ship.  Again, like R-Type and Nemesis your ship is equipped with two ‘options’ which are independent satellites that fire when you do.  Rather than manipulate them in-game though, you need to set their behaviour in that opening screen.  Do you want them locked and firing forward with you or do you want them to cover your rear?  Do you want them auto-targeting?  Or just flinging out firepower in an arc to cover your dead spots?  There’s a good degree of choice anyway, and it’s worth experimenting with. 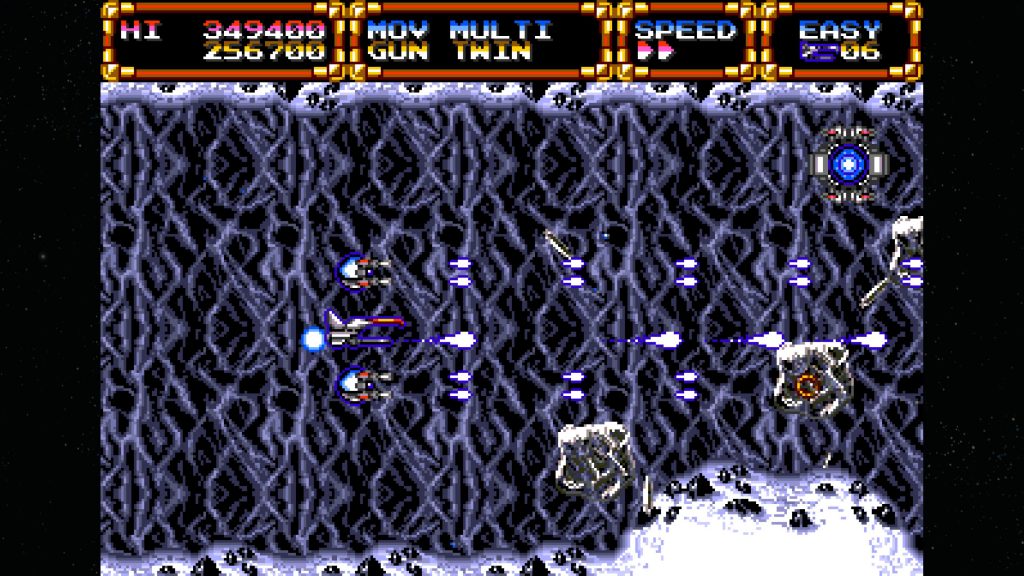 One of the great things about the ‘enhanced’ version of the game is that you also switch these options on the fly during the game too and you can manually aim your options using the right stick which is a very cool addition.  The original version does away with all that if you just want the authentic experience.

Knowing what a) shoot ’em ups from the ’90s and b) the Japanese are like, we decided to pop the game onto ‘Easy’ initially which is Japanese for ‘Hard’ apparently.  Death comes quickly in Gleylancer, like impressively quickly, and so you’ll need to try out the various configurations until you find the one that stops you dying a peasant’s death immediately.  It’s a shockingly harsh introduction to the game but eventually we found our feet and were able to become competitive.  Death is still always just a few frames away but once you get your eye in and your thumbs coordinated, Gleylancer becomes a lot more playable than you might initially think. 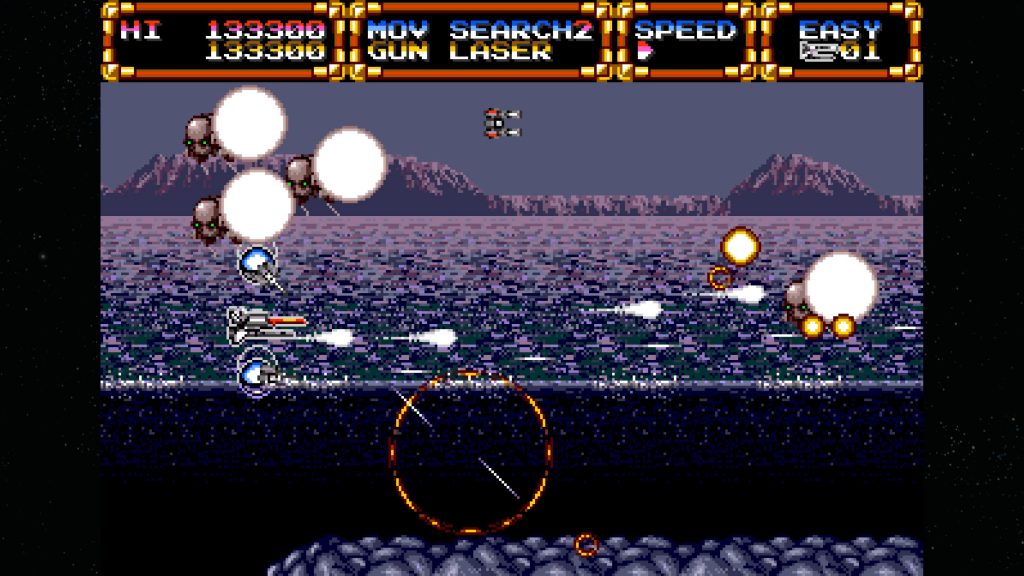 Then it’s just a case of surviving twelve stages of popcorn enemies and big-assed bosses, which is easier said than done.  This is mainly because occasionally, even after you’ve got your preferred loadout and have figured out which power-up weapon you prefer from the generous selection the game offers, occasionally the game will hit you with a section that is just shockingly tough.  There were some boss battles that made us wonder if the game had even been playtested by humans.

That said, while you might need to be prepared for those sections, which only comes from learning when they show up and what will happen when they do, the game isn’t the same kind of tedious memory test that R-Type becomes in its latter stages and is, for the most part, fun to play.  The danger nearly always comes from the enemies too rather than having too many environmental hazards (although there is one obligatory section with barriers to get through). 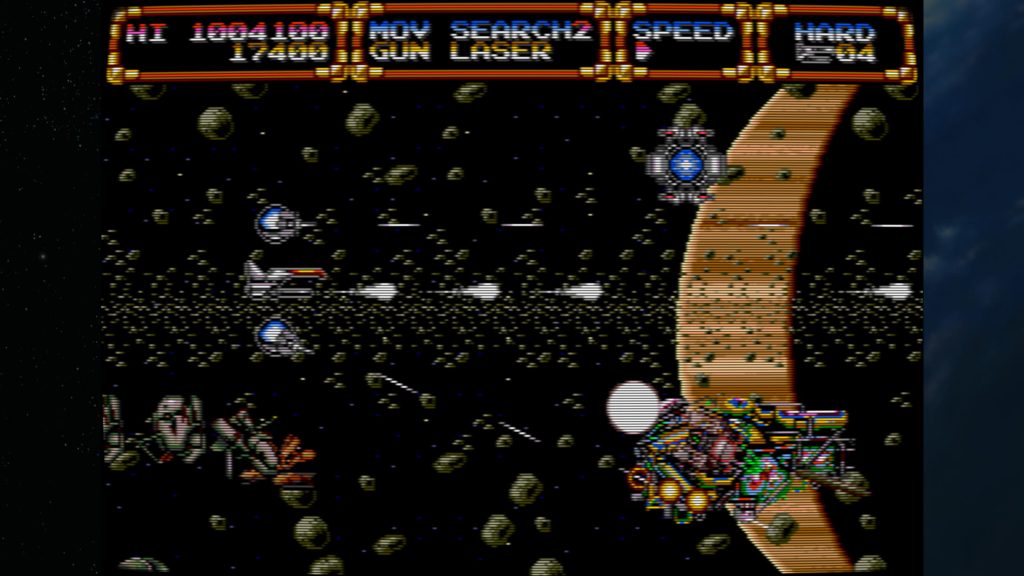 Of course, your enjoyment of Gleylancer depends on the type of shoot ’em ups that you prefer playing but we tend to prefer this sort of thing.  We like having lots of weapons to play with, speedy action and plenty of easy to kill enemies (rather than bullet sponges) and so we were pretty happy playing through this one.  Of course, those difficulty spikes were a real issue but Ratalaika were never going to drop anything too challenging on us and so you do have the option of a very generous rewind feature that works in real-time to let you erase any mistakes (unforced or otherwise) and even quick saving if you need it.  That might spoil things for any shoot ’em up purists (although these options aren’t available in the ‘original’ mode but for us it was an absolute godsend.  It may trivialise things a bit but some of the boss battles are even kind of hard with it!  Without it though I’m not sure a 1CC would be possible for us in our regular human bodies with, you know, normal eyes and thumbs and brains.

The other enhancements just seem to be some accessibility stuff, translations for the anime-esque cutscenes and a choice between the enhanced version and the original which just means a switch in graphical fidelity from what we can see.   The game looks good though, in that early ’90s console kind of way and it has a selection of manic tunes to accompany the action.  Sure, it’s all a bit dated but it’s obviously more authentic than a lot of these new retro-styled shoot ’em ups.  And of course you get to add a CRT filter if you like that sort of thing. 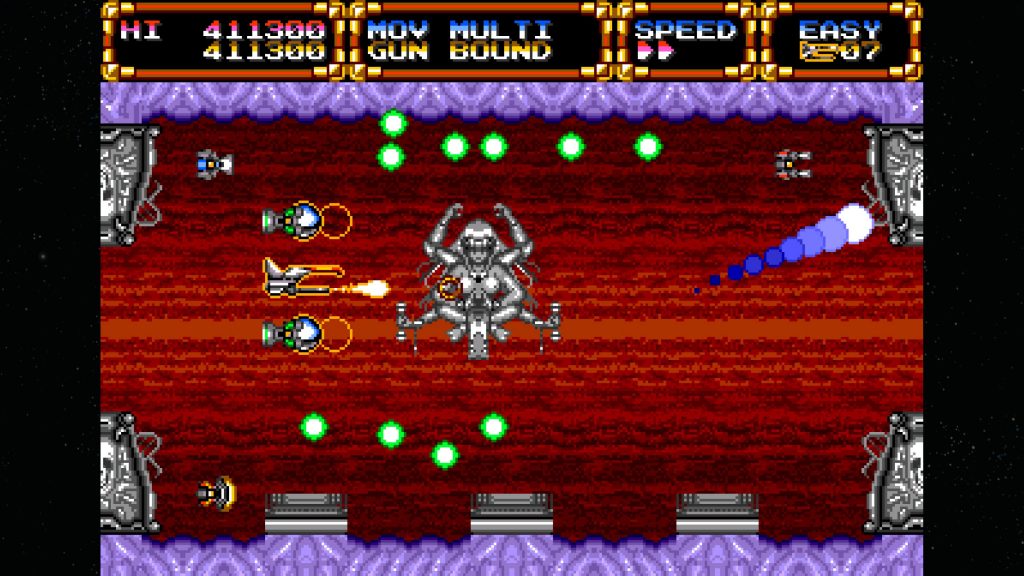 The main audience for this one will be fans of the original and fans of hardcore shoot ’em ups but the Ratalaiki brand will mean a few trophy hunters might tag along for the ride and they’ll get their platinum trophy with just one playthrough of the game.

All in all, this is a pretty cool release though.  An obscure shoot ’em up, reintroduced to the West with a cheap price tag and just enough care and attention to make it worth picking up.  It’s not going to be up there with the true arcade classics but it’s a good, enhanced port and we appreciate some of the gameplay improvements it brings.  It might be a bit too dated for some but this is one of the better recent Ratalaika games and one that we’ll keep installed for the foreseeable future.  Or at least until aliens come and kill us in four years time.

Gleylancer
7 Overall
Pros
+ Good range of weapons and option types
+ Generous accessibility and difficulty modes
+ A good, obscure choice for a modern port
+ Gameplay updates work really well
Cons
- Some very harsh, cheap bosses and difficulty spikes
- Might be a bit dated for modern shoot 'em up fans
Summary
Gleylancer is an odd choice of game to revive but this port adds some very nice gameplay enhancements and quality of life upgrades that make it worth checking out if you like decidedly retro shoot 'em up experiences.