We’ve said it before but the Jackbox games are easily the best party games out there (at least until Hidden in Plain Sight gets ported to modern consoles) and here at PlayStation Country, it’s been a mainstay of all of our online and in-person meet ups.  As ever, the Chicago natives Jackbox Games are behind this latest release in a series that has now seen eight main series releases since 2014, as well as a handful of standalone efforts too.

If you don’t know the basic concept behind these games, they aren’t really traditional party games.  There won’t be four of you on DualShocks, controlling the action.  Instead, one player hosts (on their PS4) and then they and everyone else plays on a mobile device, via the jackbox.tv website.  This of course means that you can have way more players and you can even get an audience going via Twitch or YouTube.  It also means that players don’t have to be co-located, making a Jackbox party a lot more accessible during these COVID times.

As ever, this is a collection of mini-games.  There are five on offer and it’s easier to go through them game by game but, as expected, you’ve got a mix of quiz games (which hark back to their previous You Don’t Know Jack series) and ones where you get to draw or create things.  Usually those are best as they put the humour in the hands of the players, which usually gives the best results and is why Drawful remains a favourite even though it goes back to the first Party Pack game.

The third Drawful game in the series, this one keeps the initial concept where players have to draw something unusual and provide descriptions of other players’ drawings.  The only difference with this one is that you now get to draw two frames which will repeat like a GIF.  It’s not a huge update but it does everything we love about Drawful and the additional animation element makes things a bit funnier too.  Obviously, this mode really relies on the people playing and if you’ve got a gang of mates with a similar sense of humour, this one will keep you going all night.

Obviously, this one is the highlight of the pack just as the drawing ones in previous packs have been (we’re thinking Civic Doodle and Tee K.O.) and we’re of the opinion that there should be a drawing game in every pack.  So this is a great start. 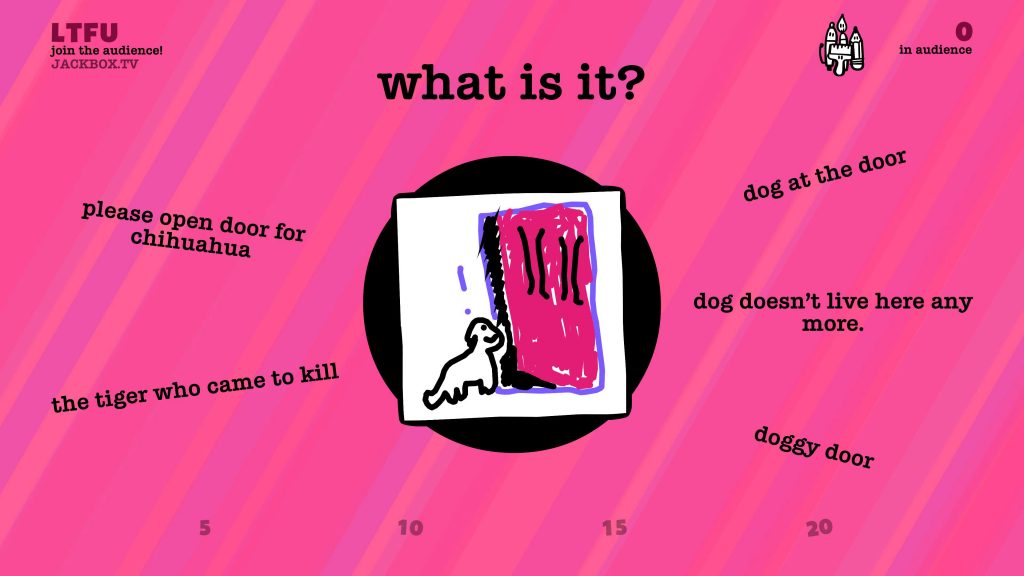 This one is a trivia game that plays like a psychedelic version of Trivial Pursuit.  The questions are fine but the ‘wheel’ aspects let it down a little.  Between question rounds, you’ll spin a wheel to earn points.  It’s a random roulette type of affair and is a way for players to earn points.  When they get to 20,000 points they then get to spin the ‘Winner Wheel’ and will need to land on the right segment to then be declared the winner.

That’s fine but when you get to 20,000 and don’t get lucky on your spin, it’s all a bit deflating and eventually it plays out like one of those board games from the ’80s where you have to roll a six or something to actually finish it. 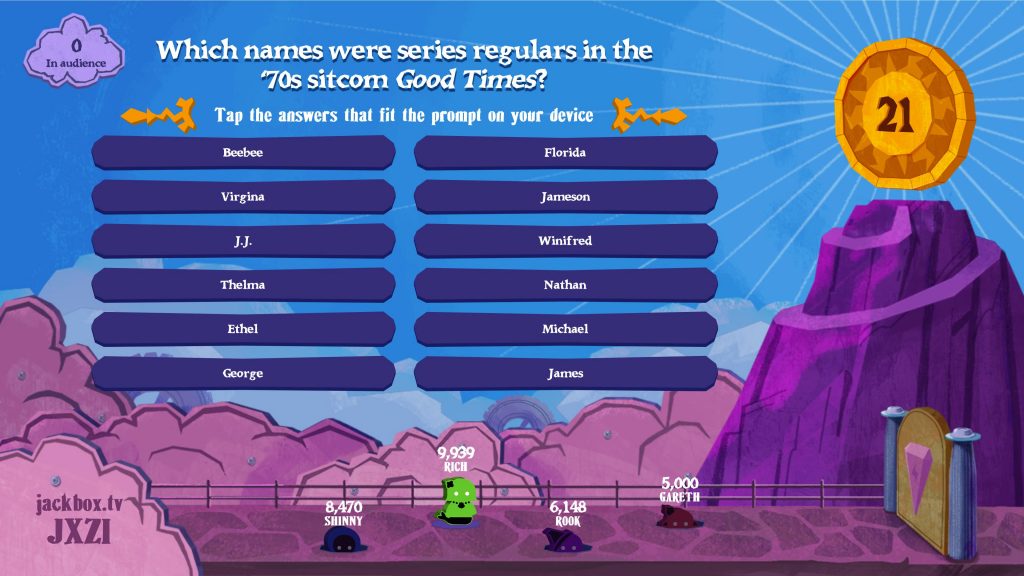 This one is quite interesting.  Job Job sees you all interviewing for a job by answering random ‘ice-breaker’ questions and then having those answers pitted against each other in classic Quiplash style.  We’re a big fan of Jackbox when it does this sort of thing as it provides plenty of opportunities for absolute carnage.

The fun thing here is that the answers you first give are all compiled together and then subsequent answers can only use words from other answers and the questions themselves.  Okay, that might not make sense but think of it like someone is making a ransom demand by cutting out words from a newspaper.   And now imagine that being very funny and probably quite offensive.  I had a tough job pulling out a useable screenshot which means this game is FUN. 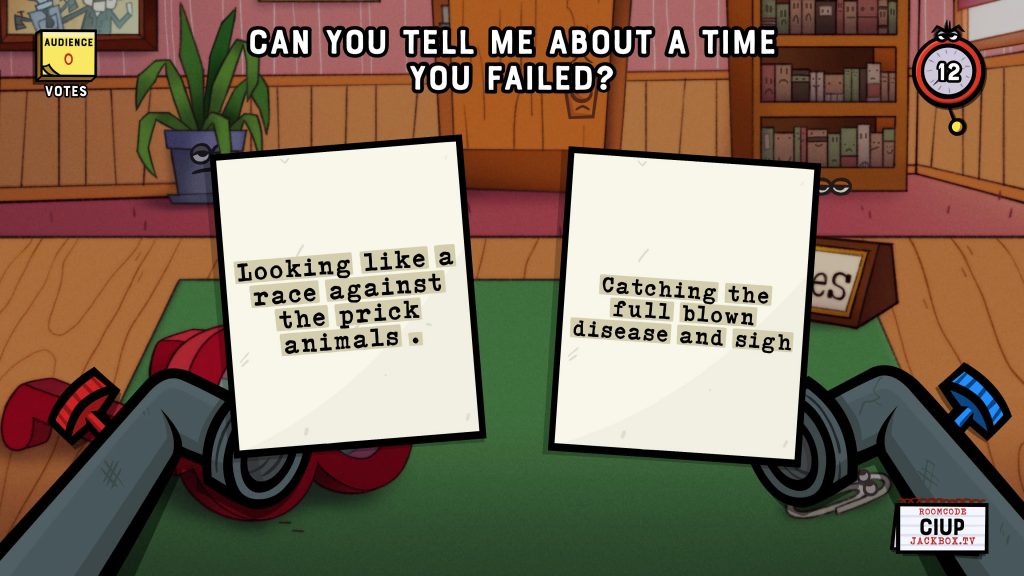 An unusual entry into the series, this game has you working in teams and is a bit tricky to explain but essentially you get a poll with eight options and players need to, as individuals, rank them in order of preference.  Then as teams you have to guess the order they were ranked in.

It works reasonably well but with no creative element, or quizzing, we soon got a bit tired of it, despite the game’s interesting RPG-esque presentation.  We can’t see this one getting much play in the future. 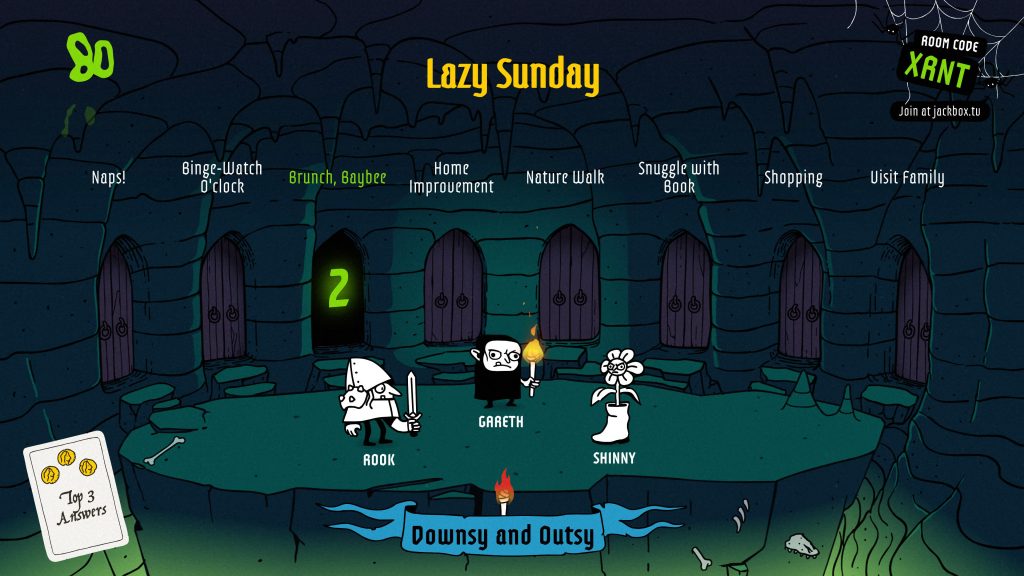 The final game in this pack, Weapons Drawn is whodunnit style murder mystery but with a twist.  Every player is the murderer.  You each create a guest to bring with you and then you all get to kill one of those guests.  You then have to leave a calling card which has a symbol on it that is particular to you but you then have to drawn around it to incorporate that symbol in a way that hides it.  That calling card also shows the weapon.

Does that sound complicated?  Well it is.  Especially when you’re trying to pick it up for the first time.  The game doesn’t explain itself all that well unfortunately but we were all left with the feeling afterwards that there is a fun game in there trying to get out.  Unfortunately, we had all had our fill of it after a few rounds. 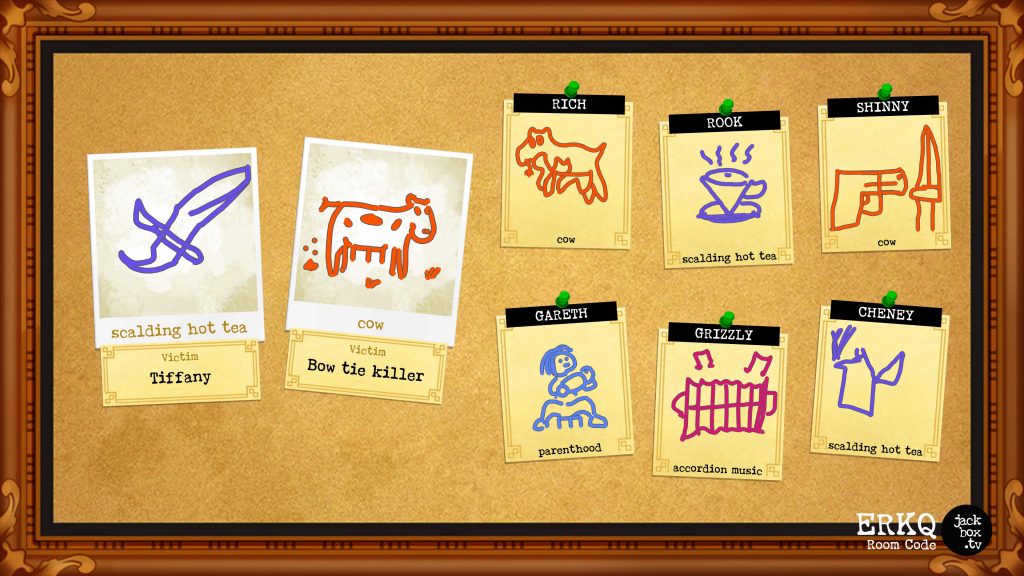 As ever, Jackbox 8 is much like the others in that it has a mixture of hits and misses but just as we love Jackbox 3 for Tee K.O. and Jackbox 5 for Mad Verse City, we will definitely return to this one many times because of Job Job and Drawful: Animate.  We’ve always wished for a create-your-own Jackbox where you just have the games you love from the whole series and we still feel that way after this one but as long as you’ve got one or two absolute bangers per pack, we’ll keep loving them.

If you’re new to the series, this is as good a place to start as any.  It’s got the best Drawful and that’s the mode that will really get the party started anyway and with the game’s clever mobile-based playability (which is now much improved thanks to the reduced streaming delay on Twitch) and cheerful presentation, you really can’t go wrong here.  These games are always a little pricey for what you get but they do tend to eventually end up on a PSN sale.

The Jackbox Party Pack 8
8 Overall
Pros
+ Job Job and Drawful: Animate are two of the best ever Jackbox games
+ No stinkers on this pack
+ Mobile interface works brilliantly as ever
Cons
- Not all games are great
- Doesn't feel like a step forward for the series
Summary
The Jackbox Party Pack 8 is Jackbox as we know and love it. A compilation of five party games of which two are brilliant and the rest are okay. We'll be returning to this one over and over.