We have to confess being a little alarmed when our download of UglyDolls: An Imperfect Adventure appeared on our PS4 before we’d even exited the PS Store. Moreso when we realised the publisher was Outright Games who previously brought us Paw Patrol: On A Roll. Thankfully a different developer in Well Played rather than Torus Games.

Ugly Dolls are a plush toy phenomenon that has been around for almost twenty years and this is the game tie-in of the forthcoming film. Quite why it’s taken them this long to come up with a film is anyone’s guess, but here we are. 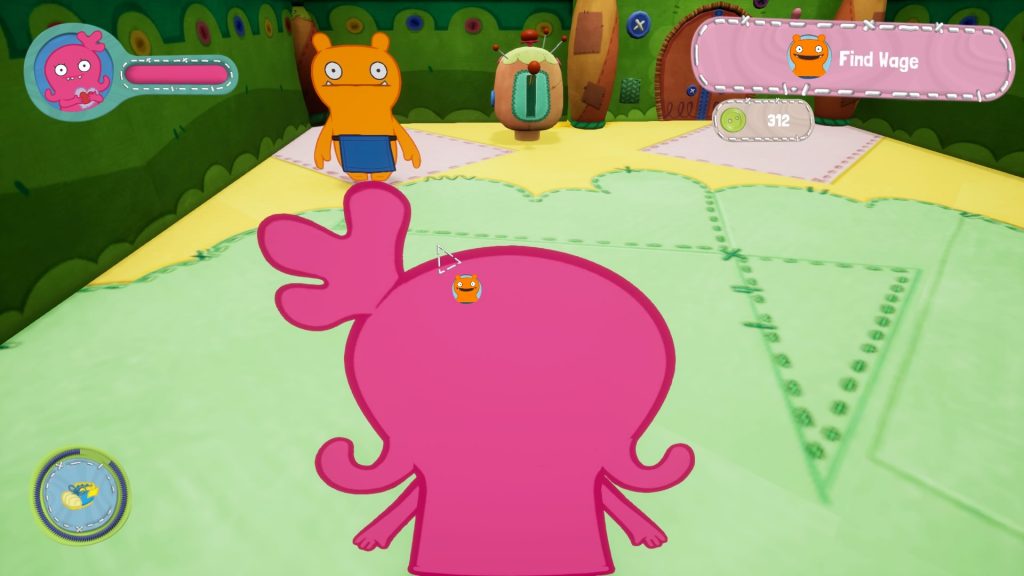 It shares the patchwork look and feel of the licenced property and from what we can gather, loosely follows the plot of the film. That 424Mb download betrays the fact this would fit on a CDR and hence voicework is limited to cutscenes only. No celebrity cast voices for you here, oh no.

The gameplay is inoffensive enough, best described as a three-dimensional platform game in which you explore a town (UglyVille) overridden by OCD robots that hate mess.  Your very presence elicits what could be hostility, but in the context of the storyline it is explained away as a need to keep things tidy. 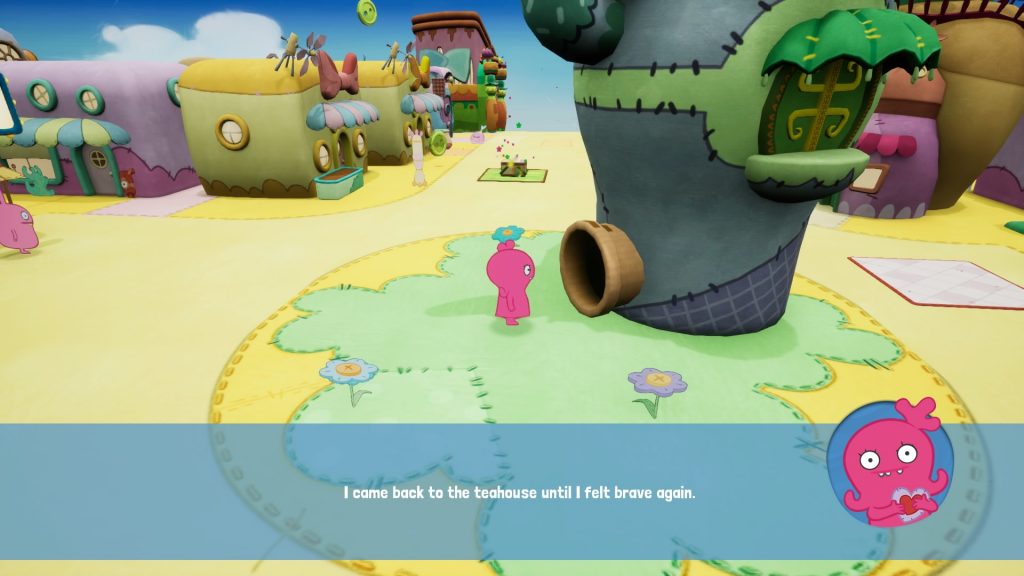 At the outset you’ll be introduced to the scenario by the narrator Lucky Bat, whose underground cave beneath his tea house is your hub for the forthcoming game. All missions start and finish here. You choose either Moxy (who’ll do anything for her friends) or Ox (who’ll do anything for his friends), gameplay being indistinguishable for each, the latter just being a bit slower to move.

UglyDolls starts off easily enough with craft baskets of components to rummage through and initially some rudimentary fetch quests. However, it soon becomes clear that this gameplay loop is all the game really has to offer. Admittedly, the core demographic for this isn’t likely to mainline it for the purposes of review, but this reviewer’s five-year-old son did remark that things did seem a bit familiar. “When are we going to do something different?” 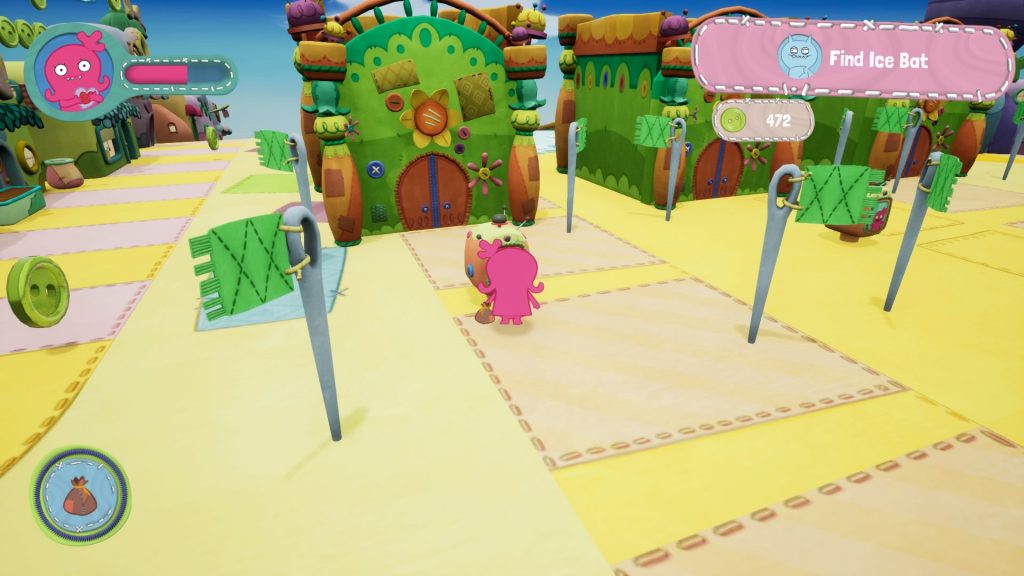 All that really changes is the description of the items that you’ll collect and the frequency of fetch quests, increasing in number as you progress through each successive chapter. For that reason alone, UglyDolls is a game best left to short play sessions lest boredom sets in.

It feels like the opening quests in World of Warcraft except instead of killing six rabbits and skinning them, it’s collecting baking ingredients. Or blocks of ice. Or any number of arbitrary items. They are all represented by a singular gold coin design with no discernible difference between them and the last fetch quest item other than the text in the top right of the UI. 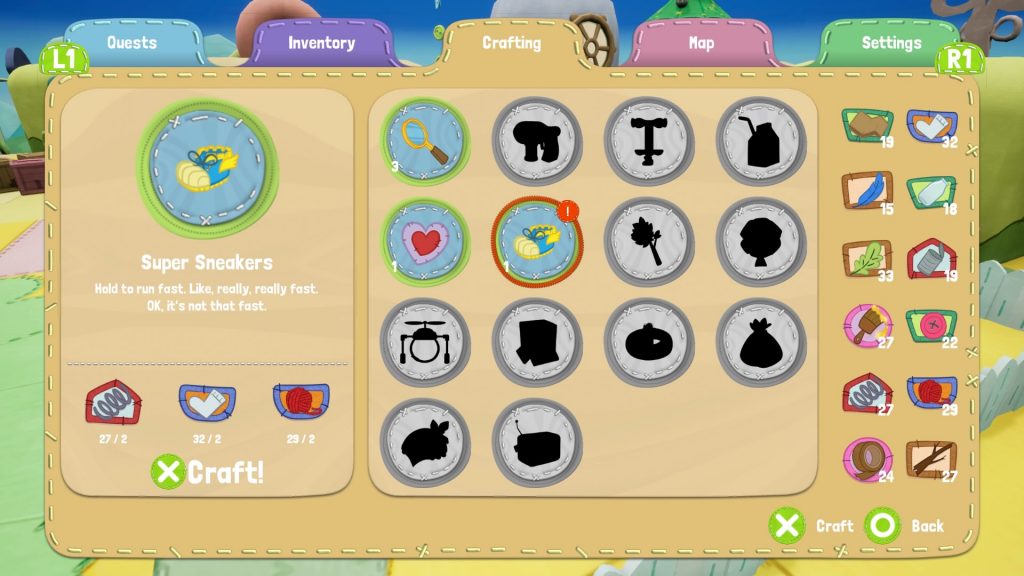 It’s a shame as some of the platforming is borderline challenging, certain areas only reachable once you’ve crafted the item that gives you the ability to progress further. It could be seen as an introduction to Metroidvania style gameplay, especially given the way it gates your progression.

Regards the crafting, your rummaging yields the required raw ingredients to craft items. Along with the buttons that are the game’s primary currency, you’ll hoover them up with ease and rarely, if ever need to look for ingredients. All the consumable items you need can be crafted with extra recipes unlocked via the in-game shop or by beating missions.

You can incapacitate, trap and distract the robots by various means, it’s a mild diversion at best. Though due to the various methods having associated trophies you’ll fulfil those criteria at least. 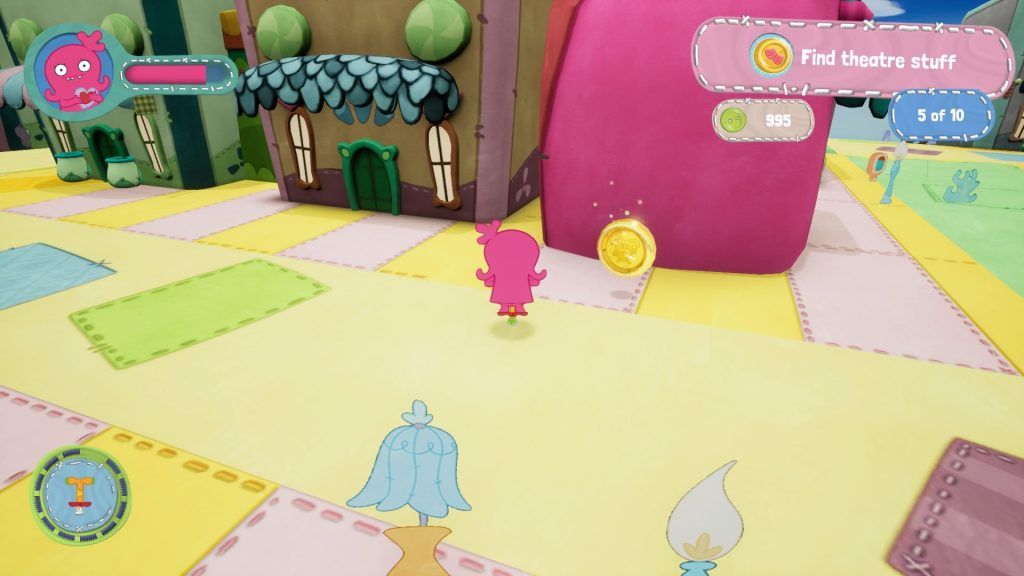 At this point we have to take a step back and remember the target audience of this game. It falls slightly beyond that of Paw Patrol, but beneath slightly more mature fare like the Lego games. Those at least mix things up a bit gameplay wise, UglyDolls sadly fails to do so. Unlike PP, UglyDolls does at least offer up a platinum. Though this game is no better than one of Ratalaika’s grindier efforts, just being a bit of a chore to get the max due to having to complete two playthroughs. That and the interminable fetch quests.

Some of the robots you face off against offer a slight challenge inasmuch as they teleport you away from the immediate area you’re in, but they’re a slight inconvenience if nothing else. Others muddle up your movement or try to chase you down. As enemies go, they’re no more challenging than an annoying bit of white fluff on a black suit. The further you progress through the game, the more densely they populate the town but they rarely prove more than slightly annoying. 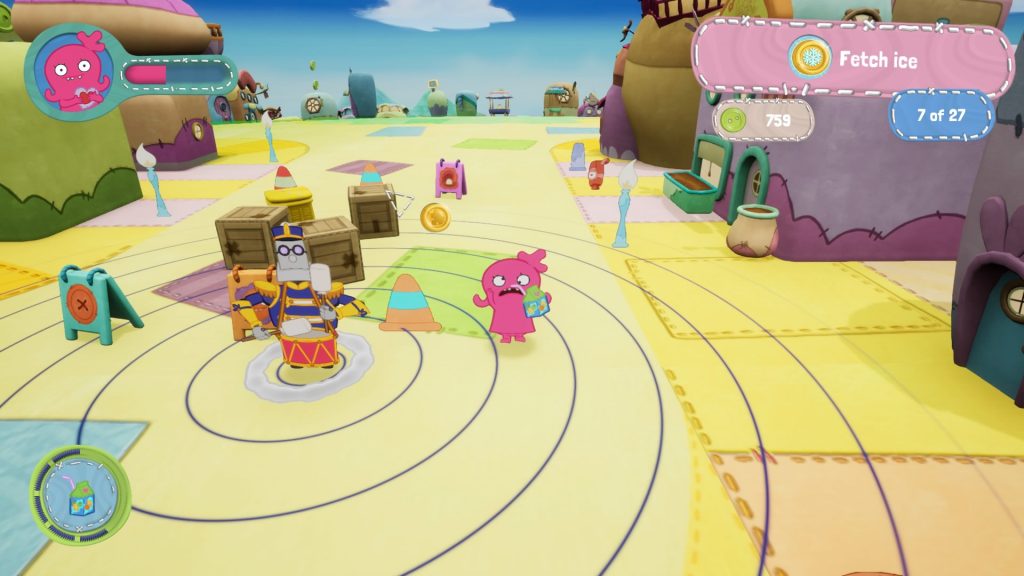 You have a health bar but you don’t die when it’s depleted. Except here it’s courage and you merely run out of bravery for no penalty of any kind. Not the sort of game to confront mortality admittedly.

To conclude then, UglyDolls: An Imperfect Adventure is very much a game for one of three key archetypes. They being the obsessive fan of the toys, young kids who end up being enthralled by the imminent film or the obsessive trophy hunter as this could well be maxed in one sitting. Were Blockbuster Video still a thing we’d even recommend you’d rent it instead. UglyDolls is true to its full title if nothing else, imperfect.

UglyDolls: An Imperfect Adventure
6 Overall
Pros
+ Could well be My First Metroidvania for kids
+ Bright inoffensive design faithful to the film
+ No collectibles barring in-game currency and crafting ingredients
+ As a parent, it won't take up too much space on your PS4 to indulge your child
Cons
- Perhaps too challenging for younger players
- Gameplay is a bit one-note. You can do more than fetch quests in a 3D environment
- What no voice acting?
- Perhaps a little expensive at $40/£30
Summary
UglyDolls: An Imperfect Adventure is pretty inoffensive, just like the film it has the licence for. It's alright, but just like the film it's hard to garner much enthusiasm for it unless you're already a fan. A by-the-numbers movie tie-in with a straightforward platinum trophy.