Angerforce: Reloaded is a vertically-scrolling shoot ’em up in the classic 1942/Dodonpachi style that comes to us as the debut from Beijing based coders Screambox Studio and it is out now on PSN.

When creating games in this genre the recipe for success is no secret and yet often indie developers struggle to get it right. What you want is slick movement, clear visuals, some risk vs. reward mechanics, a good scoring system, lots of enemies and the a heap of powerful weapons with which to decimate them.

But how does Angerforce fare? Well, after a bit of throwaway plot, you are given a quick tutorial which explains the basics of movement and combat. Shoot ’em ups usually have their own unique traits when it comes to gameplay and Angerforce is no different. 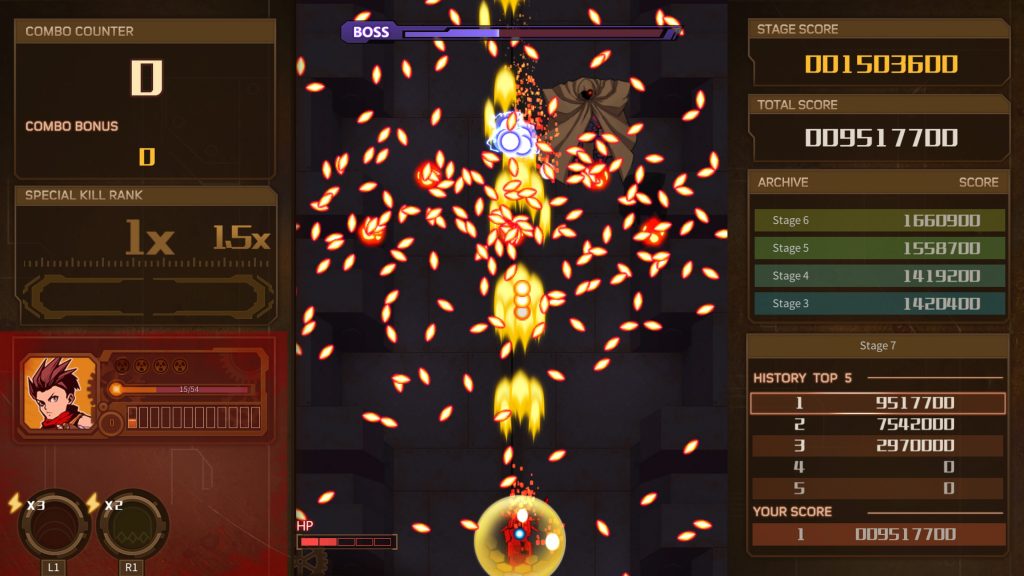 respectively. This is a good way of doing things and different to the usual method which is where you slow down when you hold down the fire button. This is better because it means your speed isn’t linked to your firing and I don’t ever want to be tapping away at a fire button if there’s an option to hold one down.

unleashes your main weapon in a stream of bullets although you can tap it if you so wish. Special weapons are mapped to

and these vary depending on which of the four pilots you choose from at the start, each of which coming with their own balance of firepower and armour. Firing them takes energy and this recharges slowly over time or can be topped up by collecting pick-ups from defeated enemies. The other way to charge up is to hold down the

button which charges your energy a lot faster but leaves you vulnerable.

The scoring system also links in with these special attacks as there is a multiplier system linked to a combo meter so if you want the really big scores, you’ll need to keep killing enemies with those specials while finding ways to recharge your energy.  You also get a bomb attack, mapped to

, which is very handy.  You can get more of these by killing enemies with your specials, which gives you even more reason to use them. 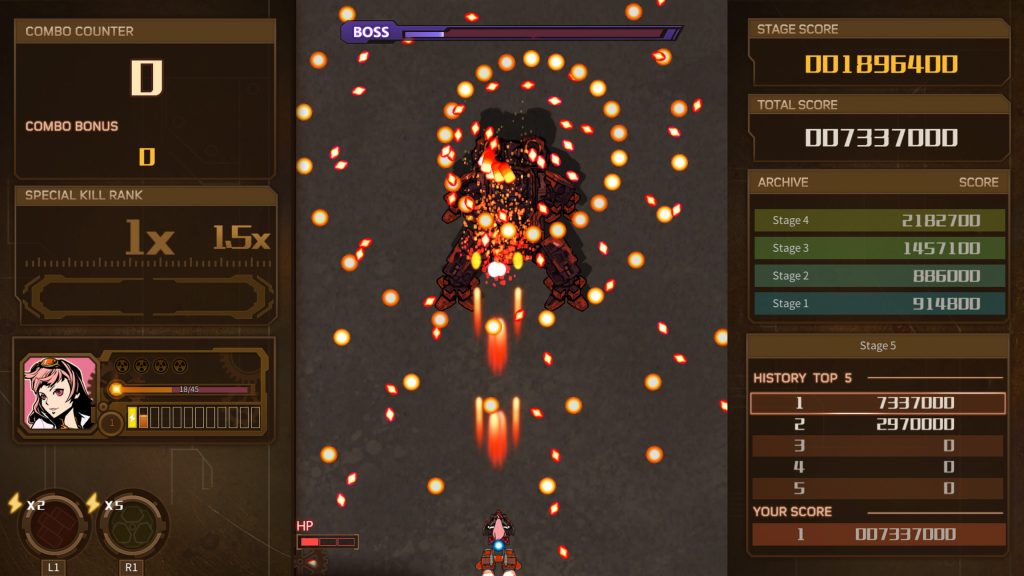 The core gameplay is pretty slick with the controls responding well to any bullet hell patterns that come your way and it doesn’t take too long to get used to the gameplay. The main campaign mode gives you three difficulty levels that are unlocked along the way. Noob gives you three stages to fight through with fewer bullets to worry about. Beating that unlocks Normal which offers five stages and a higher level of challenge. Finally, Hard gives you all seven stages and takes the difficulty up even higher.

However, it’s not as cut and dry as all that. When you finish a stage you can trade in some points to replenish your stock of hit points and bombs, as well as topping up your energy. If you lose all your hitpoints in battle, you can spend these to continue as well. Where this gets really interesting is in the game’s rogue-lite mechanics.

At the end of a successful campaign, any unspent can be used to purchase permanent upgrades which offer improvements to various attributes, to specific pilots or generally across the board. Increasing your damage output, your recharge speed, your ability to hoover up pick-ups and so one. There are dozens of these and it really does give you a reason to keep replaying. 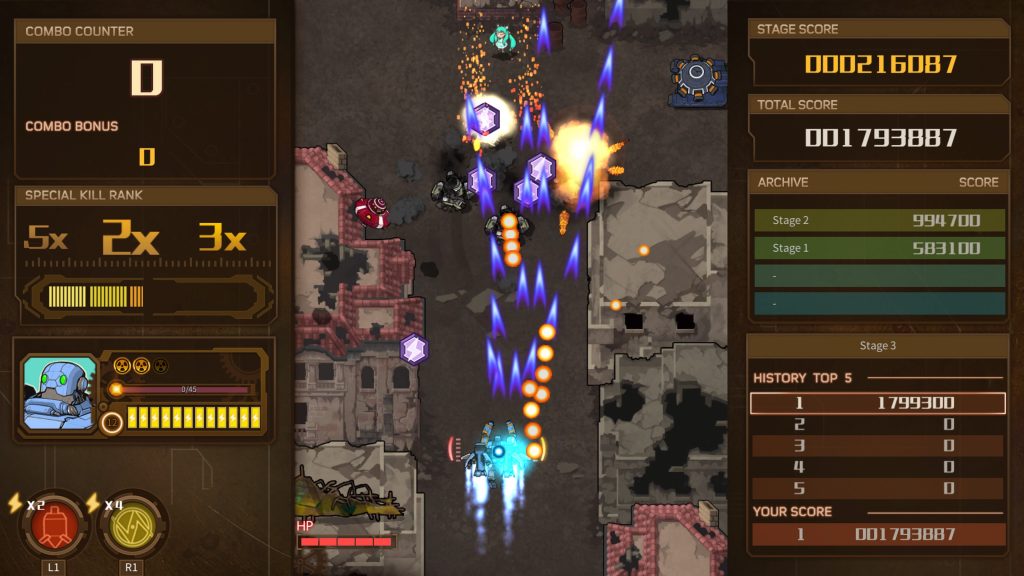 There is an issue though. I’m not a shoot ’em up pro, although I am a big fan of the genre, and I was able to breeze through the campaign on Noob and Normal and only saw actual failure on the final boss of the Hard campaign. I did a little upgrading along the way but no replaying and no grinding, so to get all the way to the end wasn’t great. I got to the final boss in good shape and was taken out by some uncharacteristically difficult bullet patterns that eviscerated me quickly and wiped out me out for two continues’ worth of health. Not good and speaks to a serious lack of balance in the difficulty.

That said, the core gameplay is excellent here.  The shoot ’em up action feels exciting and natural and the roguelite aspects give you a reason to keep playing.  We’ve also fallen into the trap of chasing the platinum which seems very attainable except for one trophy which is either glitched or just baffling but we keep trying because we enjoy the game.

The presentation is of a decent standard throughout with some cartoonish but well-defined and colourful visuals that manage to keep the action nice and clear.  There’s no ‘what killed me?’ nonsense here.  The game’s soundtrack is also better than you’d expect from an indie effort with the usual rock guitar soundtrack that you often get in these games but one that is very well composed and recorded.

Technically speaking, the only real let down here comes from the game’s loading times which are a bit savage.  We thought the game had crashed when we first fired it up but soon learned that the game expects you to wait every time you play it and any new levels take an uncomfortably long amount of time to get going.  But aside from that, and the odd difficulty curve, this is a very enjoyable shoot ’em up that should cater to genre newbies and some hardcore fans too.

AngerForce: Reloaded
7 Overall
Pros
+ Slick controls
+ Good upgrading elements
+ Well presented
+ Exciting and addictive
Cons
- Too easy for too long
- Loading times are significant
Summary
AngerForce: Reloaded is a very playable, and enjoyable, shoot 'em up with well-considered roguelite elements but is let down by a flawed difficulty curve and some rough loading times.