For one of the most spectacular races in motorsport, the Isle of Man TT doesn’t get much attention in games. Maybe the challenge of rendering 37 miles of Manx country road is too huge a task but, step forth Kylotonn. The WRC7 developers are now turning their hand to road racing. Can their efforts do the rarely replicated sport justice? 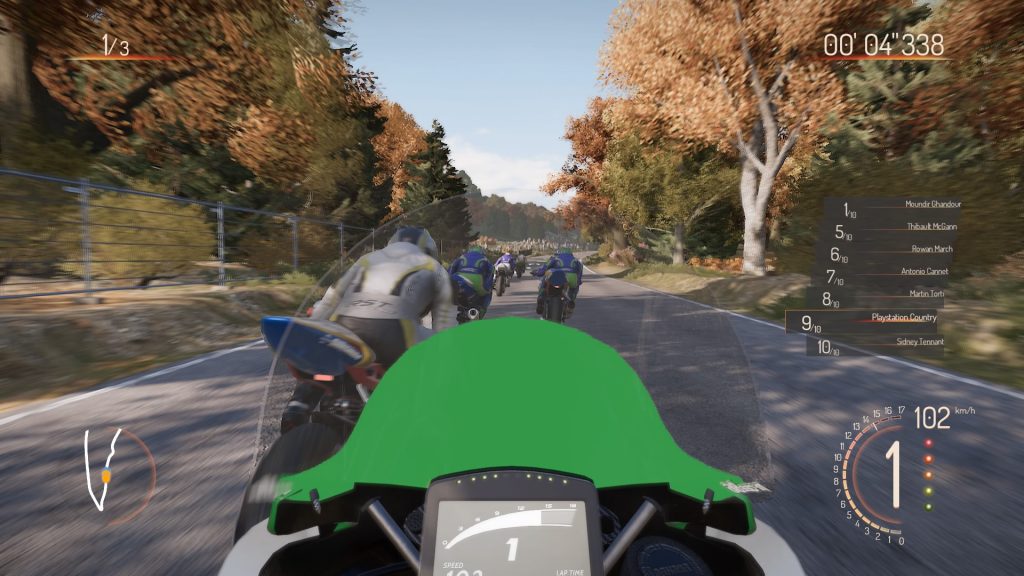 As the name suggests, the game touts the full Snaefell Mountain track made famous by the manic race. The license also brings across the major competitors and their bikes. The likes of Bruce Anstey, John McGuinness and Ian Hutchinson all make an appearance and, from what I gather, the grid is pretty stocked with recognisable talent and machinery. Unfortunately, the bikes are rated in handling, braking and acceleration which seems to dilute their individual traits and specifications.

They’ve made excellent use of the license and gone to town reproducing the island’s 264 turns. The undulating track surface represents a real challenge to ride and the narrow nature of the village areas giving way to the mountain section is great to bear witness to. There’s care and attention given to the hallowed ground and, as a fan, it’s appreciated. The relief as you descend off the mountain is palpable and a full lap of the course feels appropriately exhausting.

The package comes with some additional tracks which, whilst fictional in nature, do carry a sense of identity. There’s plenty of countryside and foliage to admire but you also visit areas of urban exploration. The Milford track takes place within a shipping yard and offers a more technical challenge. These tracks don’t quite carry the same level of track detail as the flagship locale but Kylotonns have taken their rallying experience and applied depth to the countryside these tracks inhabit. 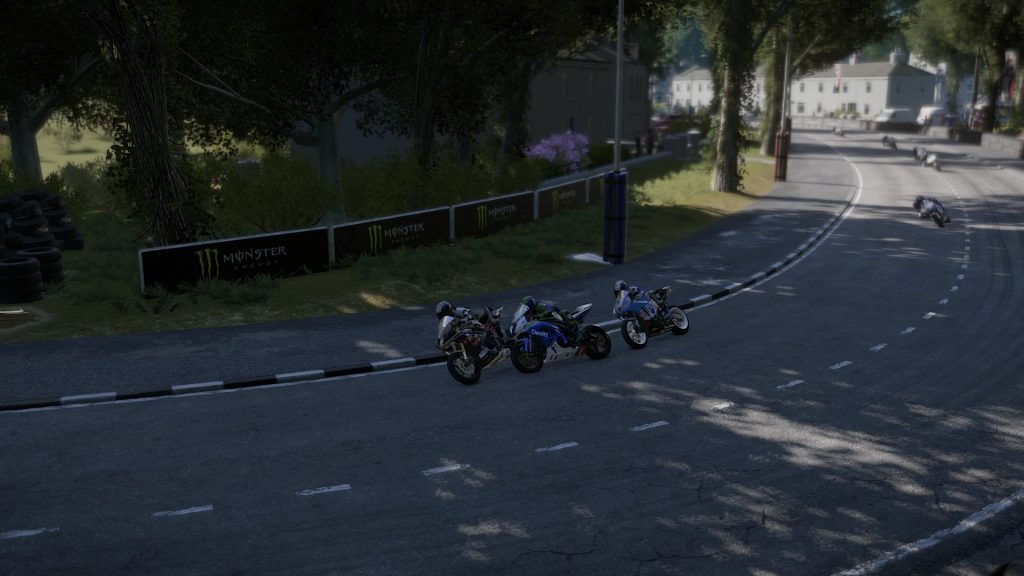 There’s a little bit of pop-in present but, overall the visual treatment is great. Sunlight reflects off the pavement and peers through trees realistically. It’s really pleasing to see as you hurtle past garden fences at 200 miles an hour. Bike models look fantastic although rider animation is an aspect the game seems to struggle with. There’s a wonderful sense of speed and, at top speed, wind booms up in a terrifying manner. Your rider looks clumsy and static. Under heavy braking, he doesn’t seem to move much. Unfortunately, this really hurts TT Isle of Man – Ride on the Edge‘s ability to give the player feedback.

You don’t see a lot of twitches or out of the seat moments. Vibration from the controller is meant to display the limits of adhesion but it doesn’t offer much subtlety. It leads to moments where you lose control in stages and can’t really recover. It’s a shame because, on a base level, the handling model is decent. Riding can feel pointed and precise without a ton of controller input. It makes sense given how much I’ve hard to learn the various tracks. With the marathon nature of some of the events, being able to tip the bike in without breaking your thumbs is welcome. 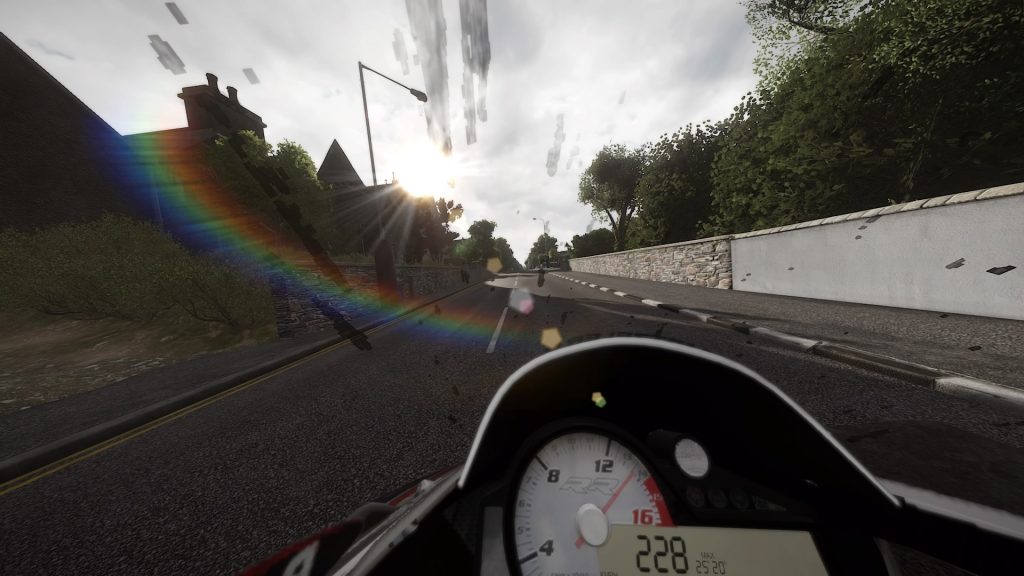 The educative process whilst playing TT Isle of Man – Ride on the Edge has been troublesome. The games contains four main difficulty levels, each corresponding to a level of riding assist. You can customise it to your will but, whilst the likes of anti-wheelie and traction control are present, steering and braking sensitivity options are absent. The default steering I’ve found to be fine but acceleration out of slow corners seems to come with a degree of peril as the power hits your back wheel.

The suggested racing line, complete with braking zones, seems a little untrustworthy. In a sport about concentration and confidence, finding these two qualities can prove an extensive task. It leads to frustration, especially with crashes being so time consuming. It’s a game that could’ve used flashbacks to allow you to find the limits safely. As it is, I find TT Isle of Man – Ride on the Edge‘s brand of racing to be stressful and, whilst it can be rewarding, getting there takes effort and a lot of time.

The modes on offer come in very standard flavours. Time Attack allows you to survey the track without fear of competition and has full leaderboard support. There’s online and offline multiplayer on offer. The latter offers hot-seating whilst the former doesn’t appear to work at time of review. Quick races allow you to customise an event. Even if the sport itself is against the clock, mass starts exist and demonstrate the AI.

They seem a little inconsistent. They’ll bump into you as they obey the racing line but, at other times, you can defend against them and hold them at bay. They seem good at top speed but can take some slower corners very badly. They have moments of great competitiveness mixed with incompetency and it results in me preferring solitary racing. 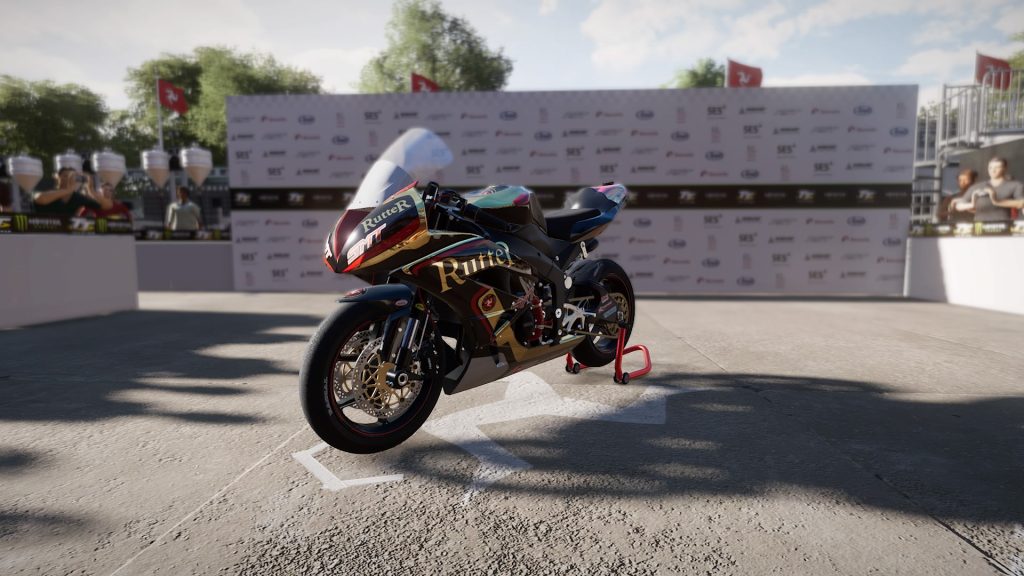 The game touts a career mode where you spend a lot of time engaging with the AI riders. You begin with a single bike within your budget and race to earn cash for new bikes and gain new fans. You have the usual emails from your manager who acts as your point of contact for accepting events. So far, progress has felt slow with events providing you with a trickle of money and fans. You’ll revisit the same locations and it has started to tire. It’s a mode that doesn’t present you with a lot of explicit, long-term goals, either. I’m aiming for the TT but I haven’t been given much feedback on when my manager will see fit to enter me for it.

If I feel a little down on TT Isle of Man – Ride on the Edge, it’s because the package itself feels light and what is there isn’t hugely compelling. That said, the riding and the spectacle of the flagship race manages to keep me curious. The leaderboard chase and the educative process is the thing that keeps me engaged. It’s a nice looking and sounding game that might wake TT fans out of their slumber. Sidecar DLC is coming for free in May.

TT Isle of Man - Ride on the Edge
6 Overall
Pros
+ Fantastic to look at and hear.
+ Has a great sense of speed.
+ Riding as you chase lap times can feel rewarding.
+ Great track design and attention to detail.
Cons
- AI riders are very inconsistent.
- The career mode feels aimless and slow.
- Player feedback is lacking which makes learning tracks tricky.
- Light on content.
Summary
There are moments where this game hits it stride as you ride in concentrated silence. Clean laps and new records are accompanied with a great sense of satisfaction. It's a pity the riding model and animation contain some omissions that limit your ability to read the bike under you. The environments are greatly detailed and the sensation of speed is fantastic. I wish this felt more comprehensive as a package and the AI was smarter but there's an enjoyable core to TT Isle of Man – Ride on the Edge.