From Cologne/Köln based developer btf (aka bildundtonfabrik literally picture and sound factory) comes Trüberbrook, a late ’60s Cold War era sci-fi point and click adventure game set in the titular village. The locale brings to mind the Harz mountain region of mid-Germany for anyone familiar with the country. 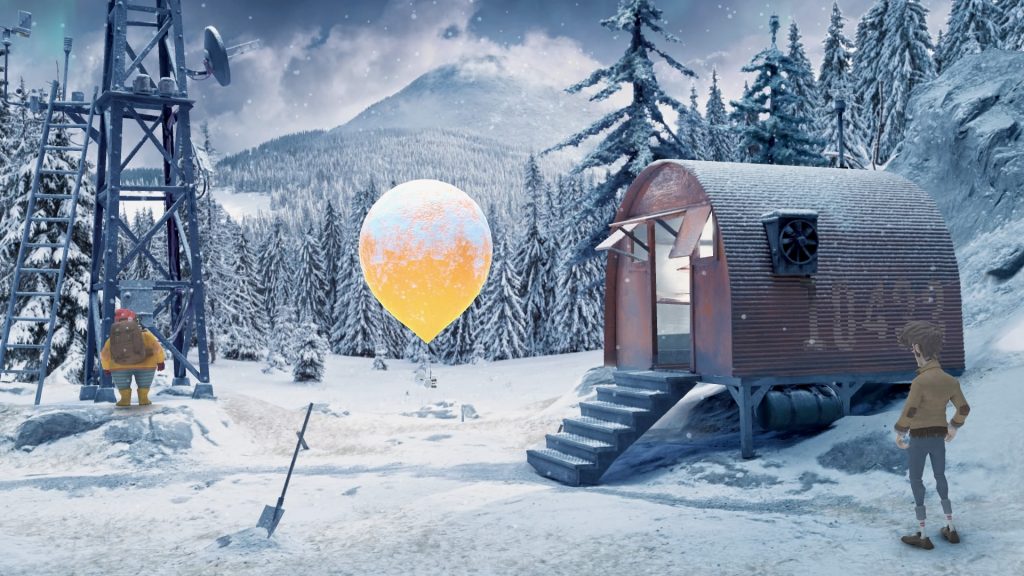 Trüberbrook first caught our interest quite a while ago off the back of a successful Kickstarter we just missed out on backing, so it is with no little delight we managed to take the chance to review it upon release. The crowdfunding allowed btf to secure extra grant equity and it shows with regards the quality of the final release.

What makes Trüberbrook particularly interesting is the fact that all in-game objects and sets barring the characters are scanned from real-world models professionally lit in btf‘s own production studio, their film making expertise coming into play. 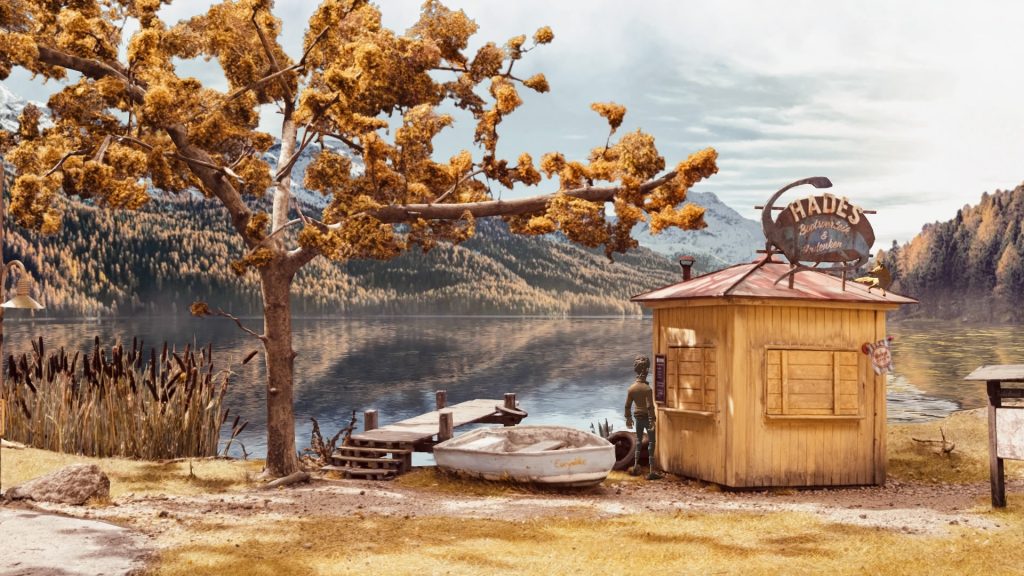 It gives the world a very distinct look, not entirely unlike one of Wes Anderson’s recent films like Fantastic Mr Fox or Isle of Dogs, except in this case the protagonist doesn’t have a bit of plane stuck in his head.

The expense and man-hours involved likely led to the relatively limited number of scenes you’ll encounter during your adventure. That’s not to take anything away from Trüberbrook, each set is exquisitely designed and laid out.

You’re gently introduced to the controls in your initial visit to a remote petrol station lit only by ambient light and the glow of neon. You can either select with the dpad or the corresponding joypad position:

being use an item. 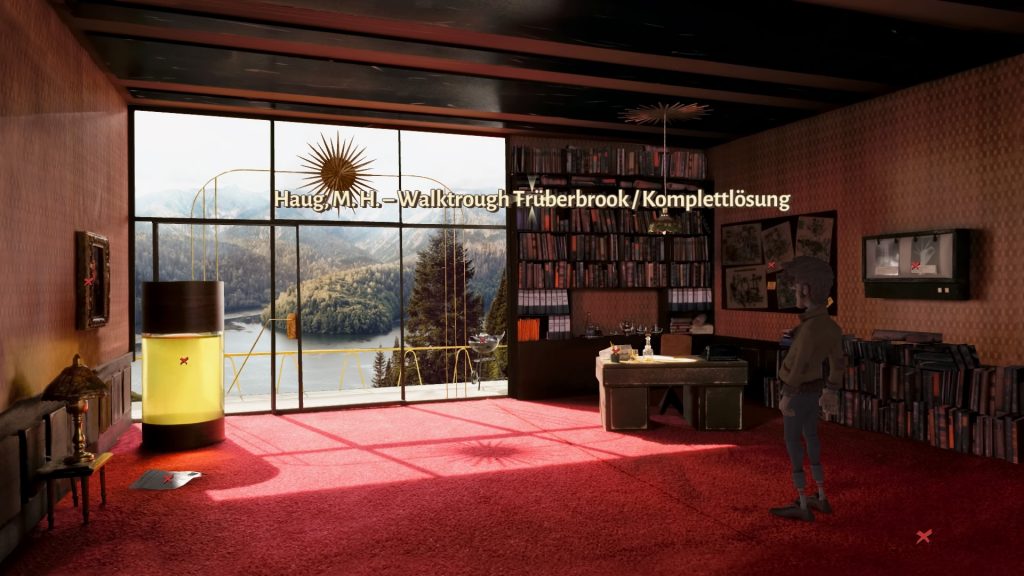 After solving a simple enough puzzle, you’ll be treated to a gloriously rendered introduction sequence with a VW camper trundling up a dusty mountain track to the outskirts of Trüberbrook village itself. At this point you’ll be introduced to the main protagonist of the piece, Hans Tannhauser, an American quantum physicist who seemingly has won a ticket for a holiday to the village. All this despite not having entered any contest to do so.

Upon making your way through the initially deserted Trüberbrook, you’ll check into the local guest house staffed by the larger than life redhead Trude. Once you head up to your room, the fun really begins, and a delightful sci-fi tinged romp commences properly.

The puzzles thankfully never fall into the ludicrous LucasArts puzzles of yore in terms of complexity, the most intricate example involving a fishing pole and a missing cat along with other items. Generally, you’ll hoover up most items required for puzzles if you’re thorough during your playthrough, only occasionally having to swap with NPCs to get the correct item for the task at hand. 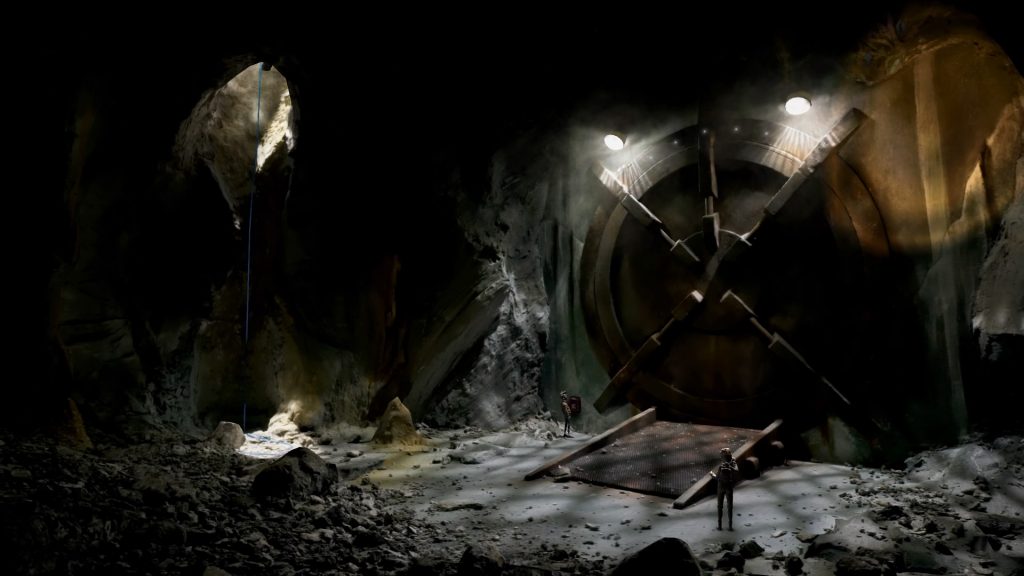 btf have obviously realised their set design can get a little busy. In a nice touch, you can hold down

to show all objects you can interact with. This helps on the breakfast table for example, where you’d likely struggle to discern from one object from another otherwise.

Sometimes you’ll have to perform a particular action for a dialogue choice and subsequent item to be available from an NPC, but it makes perfect sense in the context of the story and makes your exploration seem much more organic than if you were able to collect items pre-emptively.

All of the characters in the game are fully voiced in both English and the native German, we would recommend you go with German voiceover and English subtitles as the voice acting is excellent and feels much more expressive. Since this reviewer has a penchant for wanky art house cinema, it had to be the subtitled option for us. The subtitles are good, though prone to the odd typo and lack a little of the nuance contained in the excellent German script. 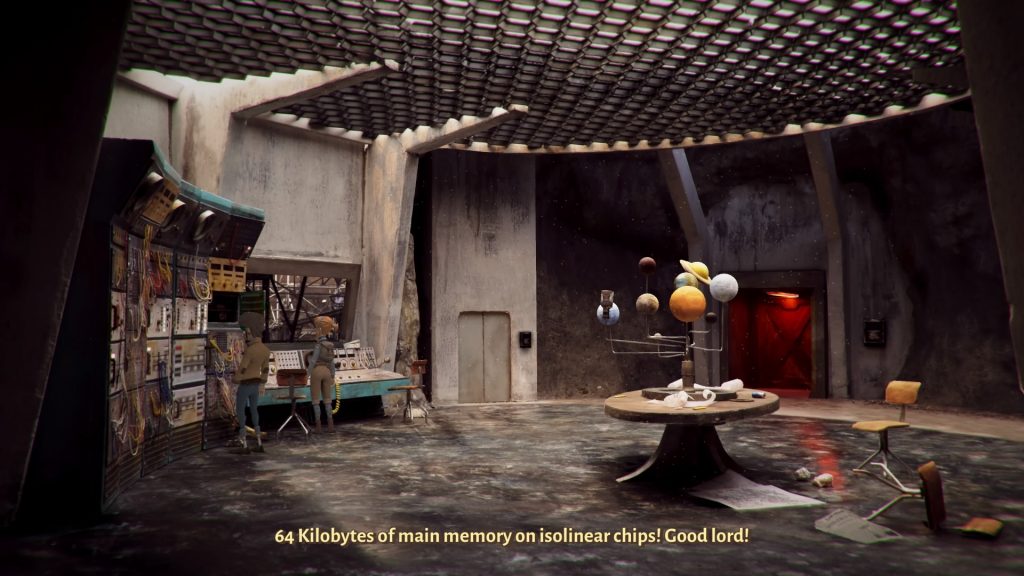 Unfortunately, the English voices fall into the trap of German-accented English barring the American Tannhauser himself. It gives the same odd feeling as the recent film adaptation of the classic novel Alone In Berlin with an Irishman in the lead role putting on a cod-German accent. Anyway, we digress. It’s better in German anyway. Though one joke makes the grade in both languages, not really making sense in German.

The music, both in the diegetic sense such as on a jukebox and as background to your own activities is excellently composed and performed, very much fitting the timeframe. One standout is a treat for fans of Leonard Cohen, aping his style to great effect. Talking of diegesis, Tannhauser himself is a nice nod to Wagner’s operatic libretto of the same name which uses this device to great effect. 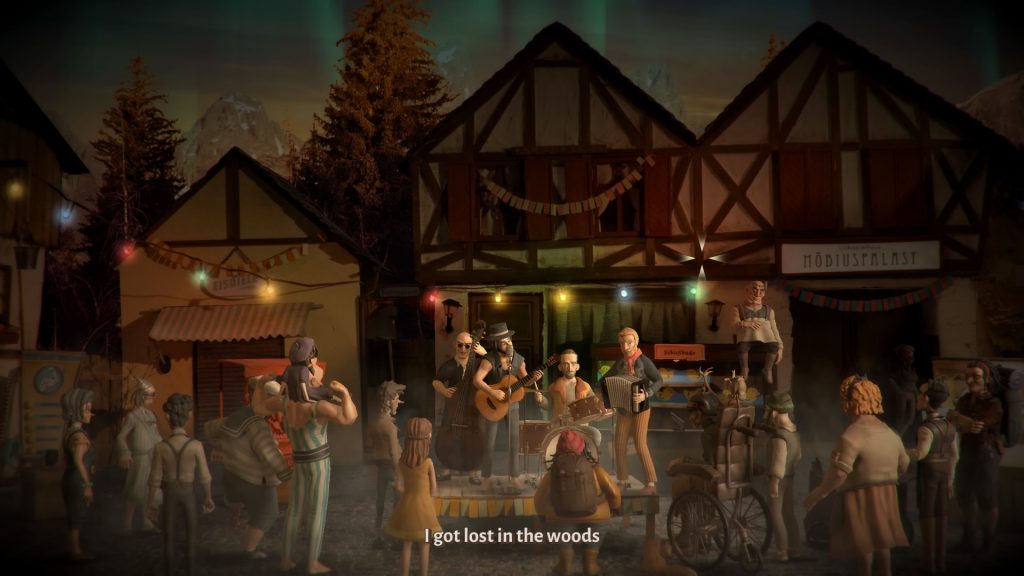 There are collectibles of a sort in Trüberbrook with associated trophies to boot, but they fill out the narrative well by taking the form of dictaphone messages recorded for an absent colleague by Hans throughout. They along with a few other trophies you’ll likely miss the first time, give good reason to play the game once again upon completing. Thankfully dialogue in almost all cases is entirely skippable so skimming through the storyline again to fulfil the criteria for trophies isn’t really a chore.

These dictaphone recordings are a great mechanism to ensure you explore every option on characters and objects, you’ll rarely get completely stuck here. One occasion where we came unstuck was due to our save being pre-release code and a critical bit of dialogue not triggering that meant we couldn’t progress. A new save soon resolved the issue. 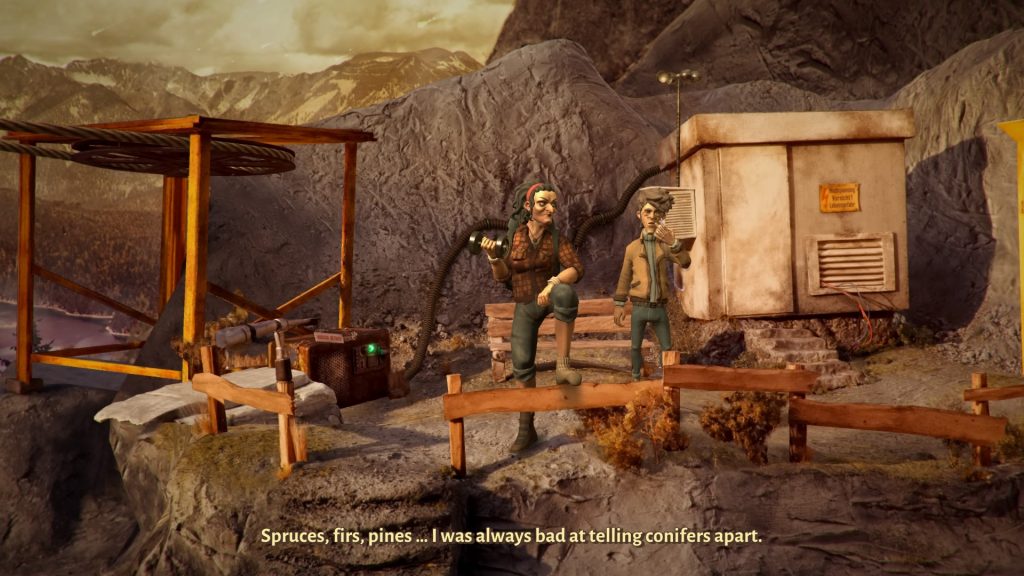 As well as two different language options, there’s also a kid friendly mode to stop awkward questions about a couple of slightly adult themed items you’ll encounter, but to be honest even in the unsanitised version there’s nothing particularly bawdy, merely suggestive.

If there’s any slight criticism we have, it occurred at the very end of the game in one climactic sequence. It was obvious enough what we had to do, but our perception of where the chief antagonist had to be stood was thrown off by not being able to work out their depth in the screen related to the event we had to trigger. But it proved relatively minor as we were able to proceed the next time we attempted it due to generous checkpointing. 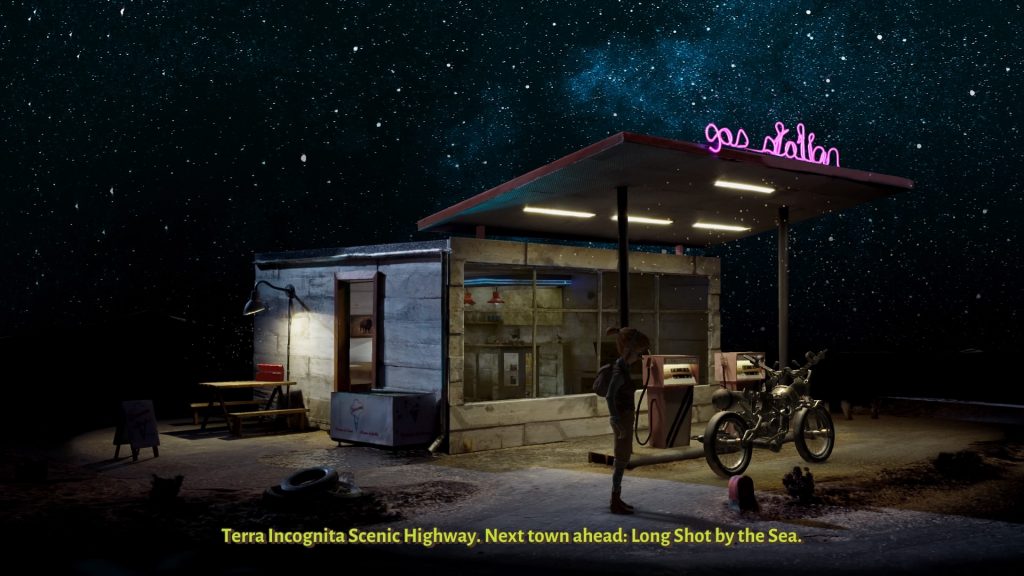 Also, we had slight issues with our character glitching on scenery, but they were isolated problems.

In conclusion, Trüberbrook is a delightful adventure game you need to play, preferably in German with subtitles. There are a few amusing moments as opposed to outright belly laughs, but that’s just fine. Trüberbrook ist tatsächlich ein  sehr gutes Spiel.

Oh, when the end credits roll, stick around for a lovely post-credits sequence.