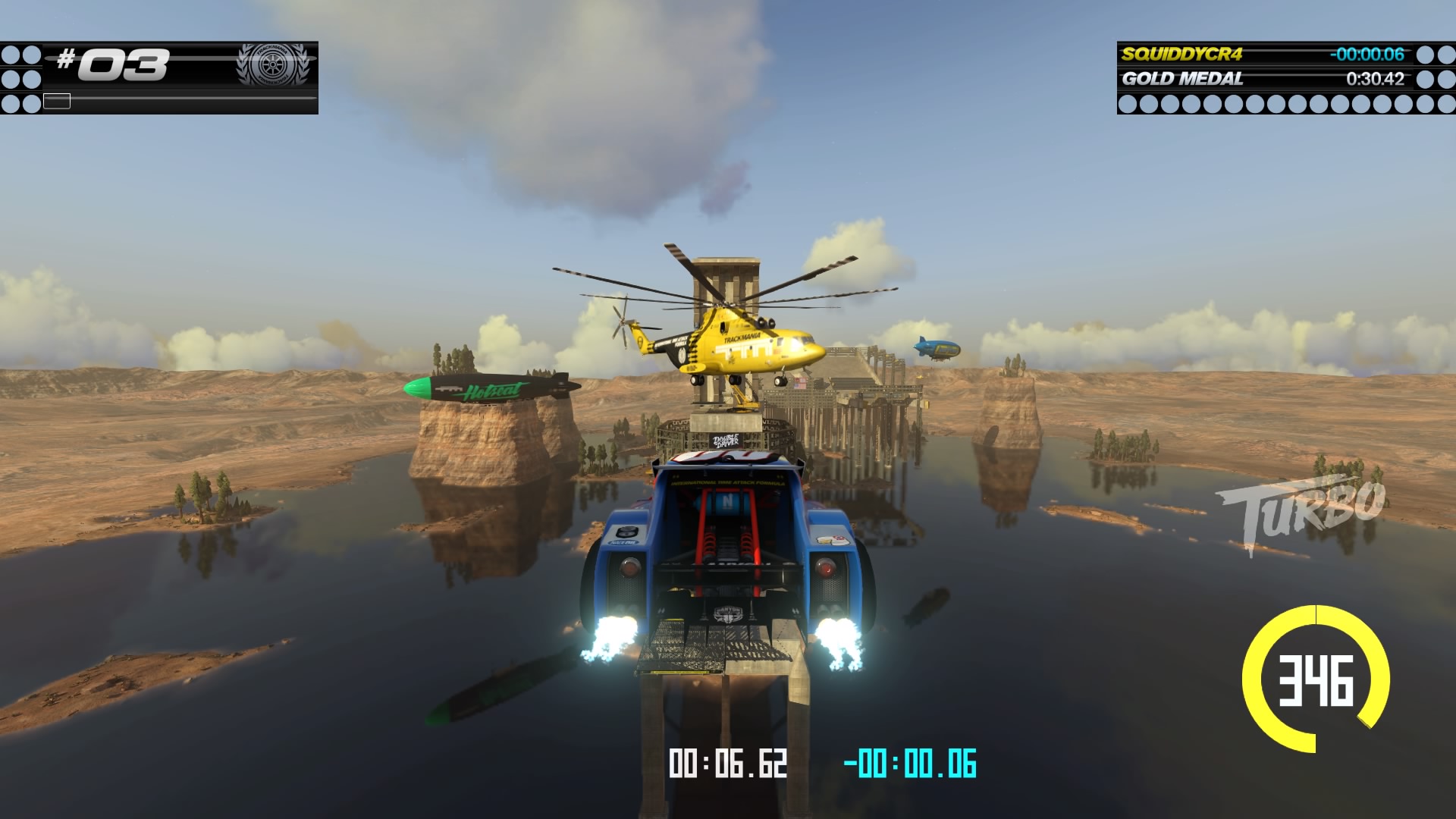 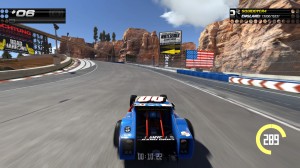 Without wanting to sound like the world’s biggest hipster, I was into Trackmania before it was cool.  I mean literally.  The very first Trackmania had very understated graphics, a far cry from the Burnout-esque visuals of its immediate sequels.  It also wasn’t really a racing game.  It was a practically a puzzle/platformer.  The bronze and silver times on tracks were usually beatable with decent driving but the gold times required some creative short-cuttery.  On top of that, the game also allowed you to earn bits and pieces for the track editor.  So you could build a great track and then cut together your replays with the fantastic replay editor.  Suffice to say, it was fantastic.

Since then, the puzzle element has pretty much gone and the game has liberally applied its go-faster stripes and headed off in a racing direction.  Trackmania Turbo continues this tradition, albeit on consoles for the first time.  As a budget physical release (it’s around £24), you can expect the package to be a little thin but as far as first impressions go, Trackmania Turbo really impresses.

The game isn’t really a racing game I suppose.  I mean, opponents don’t really exist in the same space as you.  Instead it’s all about the ghost times and so your objective is to replay races until you get the gold medals.  It’s tough almost right away.  Gold times require a mix of memorisation and smart use of your brakes (the handbrake and regular break are pretty much the same thing).  Drifting becomes important and when combined with the game’s blue skies and bright and hectic track design it all starts to feel like Outrun 2 or Ridge Racer.  Not a bad thing. 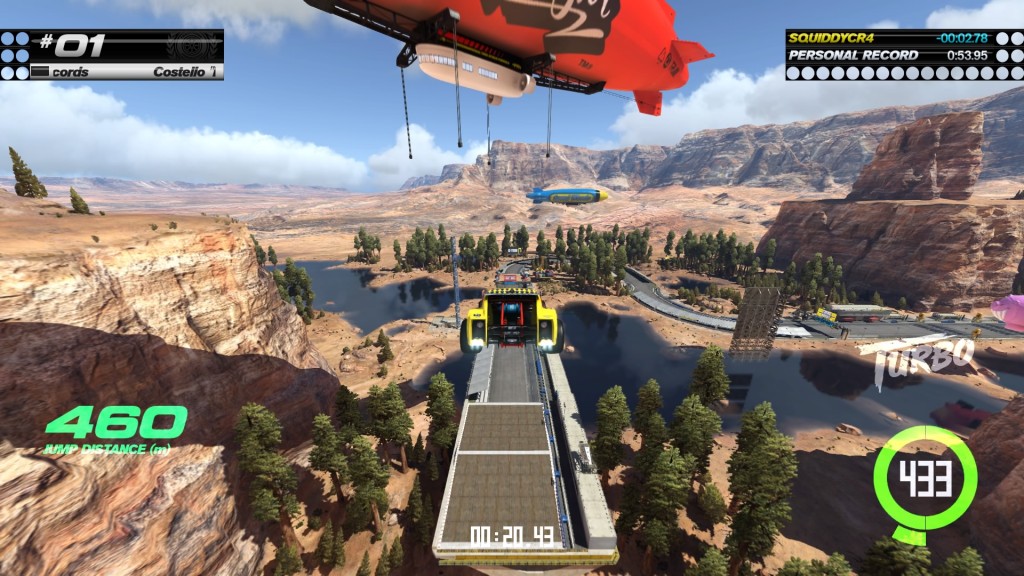 You are dropped into tracks, from a helicopter, and then you blast through them setting a lap time and then refining it.  A quick start function (mapped to the circle button), keeps things moving every time you clip a corner.  The need for perfection is somewhat balanced by the short length of the tracks though and ultimately you’re really only fighting your way towards PSN trophies anyway, so you can just bronze medal the tracks and move on.

The tracks are split into four types.  The first set of levels are glorious drift-fests, the best ones in the game.  And later you have roller coaster tracks and all-out speed tracks.  The real issue is the second quarter.  These tracks are rally style and combined with the high speeds and exuberant physics, mistakes come far too easily.  They ultimately feel at odds with the fun (but tricky) nature of the game and sort of spoil things.

As I said, the difficulty is pretty high right away and it keeps increasing for a long time.  It’s a shame as really the game should be a bit more lenient early on, especially given its arcadey feel.  After a while, the progress is harder and harder to make and with nothing but more challenge ahead of you, its easy to find reasons not to continue. 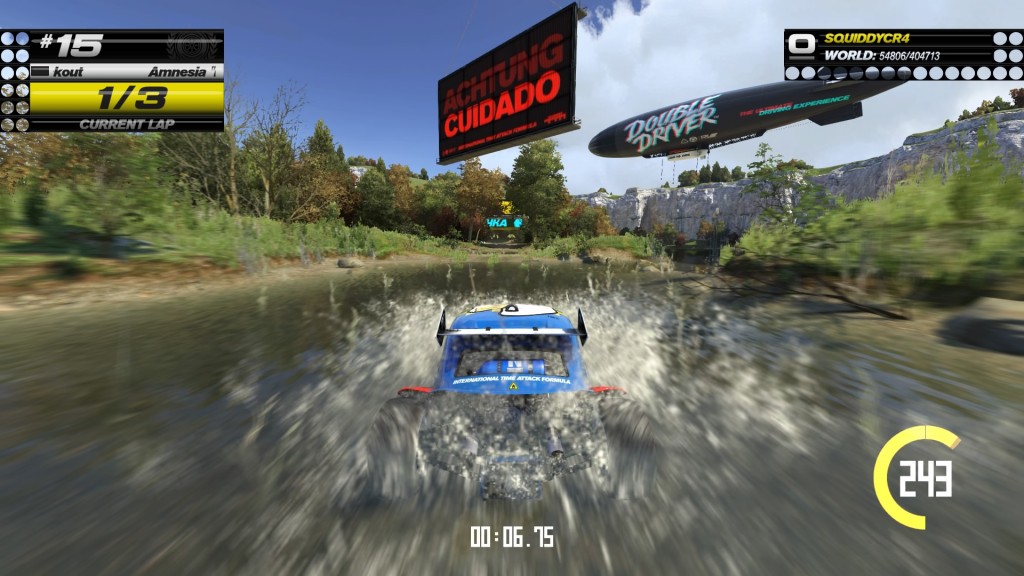 Aside from the single player campaign, multiplayer comes in two flavours.  Online play puts you in lobbies with up to 99 other players and sees you all time-trialing levels at the same time.  Racing with dozens of ghost cars on your screen is an oddly empty experience.  You feel disjointed from everyone else, the only interactions being a quick greeting (by clicking in one of the sticks) and seeing where you stack up on the session leaderboard.  It gets old almost immediately.

Local multiplayer is better.  Aside from having some real split screen action in there and some co-op (two people driving the same car… hmmm), there is also an ‘arcade cabinet’ mode where guests can log times a track.  It kind of works, if your house is full of gamers.  But if your house is full of gamers, you won’t want to be playing anything other than Jackbox Party Pack anyway. 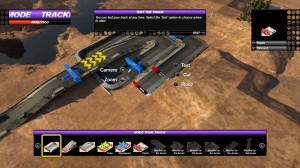 Visually the game impresses.  It’s bright and beautiful and the sense of speed, combined with the twisty-turny-loopy tracks, is really exciting.  The soundtrack is generic electronic dance music fare which almost dates the game back to it’s early ’00s roots but it kind of works.  Various languages count down the start to races which gives the game the feel of being some sort of racing festival too.  It’s nice.  We want more fun games with blue skies and Trackmania Turbo does that.

I want to love the game, I really do, but the flavour thins out pretty quickly and you start to realise why Ubisoft have treated this one as a budget release. It’s good, it really is, but it leaves you wanting a lot more than it gives.  The track editor is a nod at increasing longevity but it’s a half-measure really (although it’s fun to use).  Nope, the game needs stronger online play, more single player modes and to lose those horrid rally tracks.  But for now, we’re glad to see the series return.  Hopefully, Ubisoft won’t ignore it again.

Trackmania Turbo
6 Overall
Pros
+ Visually gorgeous + Many of the tracks are great fun to race on + Nice drifting mechanics + Good track editor
Cons
- Multiplayer is all smoke and mirrors - Single player campaign difficulty curve is pretty harsh - Rally tracks are awful
Summary
Trackmania Turbo looks the part - all fun and shiny and gorgeous - but the gameplay soon gets old and the massively unsatisfying online play feels like a waste of time.