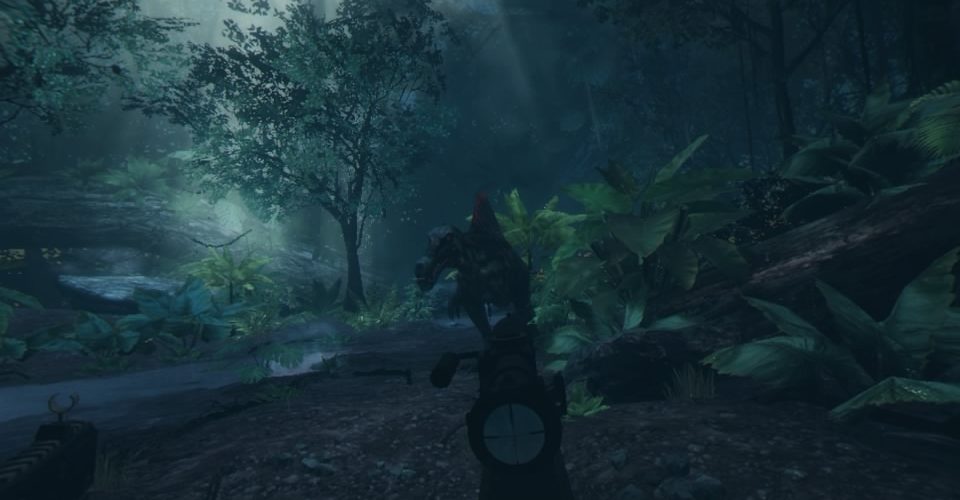 PSVR is still finding its feet a little and as it does a lot of the games on offer for the platform tend to fall into the wave shooter genre and Time Carnage by Welsh dev crew Wales Interactive is the latest.  This game is VR only and requires dual Move controllers to play.

The game offers an arcade mode but the levels for this are unlocked by playing the main campaign mode however there is no real story on offer here.   You play as a nameless time-traveller who visits various eras in the far future and distant past and blows the denizens there all to hell. 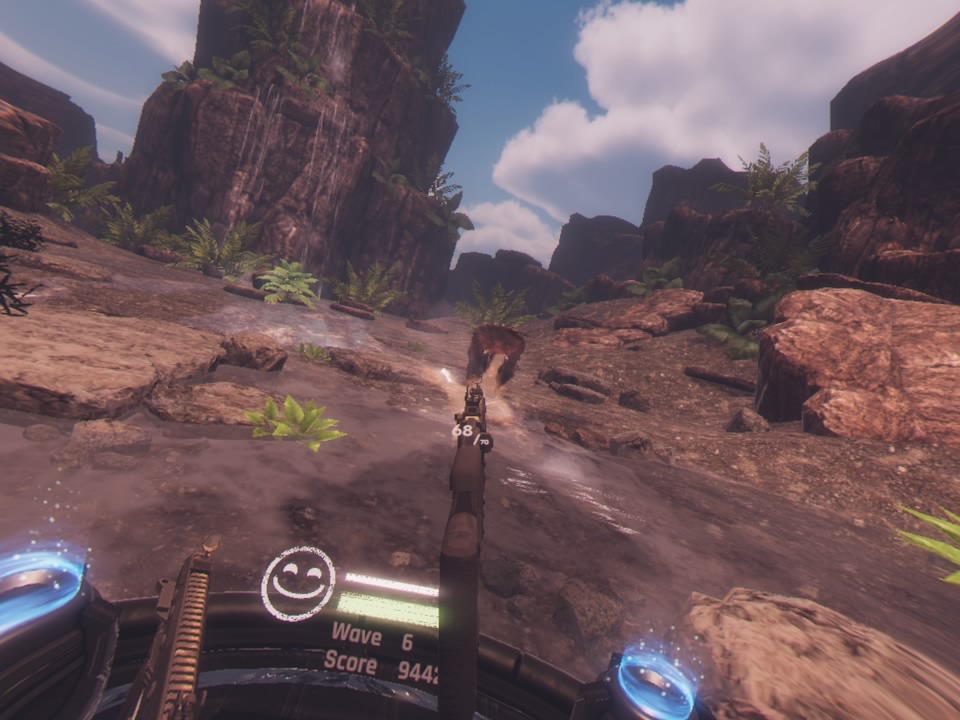 The campaign offers four eras each split into four areas.  These areas offer ten waves of enemies.  So you’re looking at forty waves for each time period, which is probably a few too many given that it can all start to get a bit repetitive but the levels do steadily build in difficulty and intensity.

You start off in the future, shooting mutants in a Fallout-style environment.  They may be mutants but essentially this plays out like a zombie shooter.  As a wave shooter you are unable to move but you have guns in four positions around you and you can pick up and drop these as required.   Dropped weapons auto-reload over time which means that when you hear the click that indicates they are reloaded, you can pick them up and start blasting. 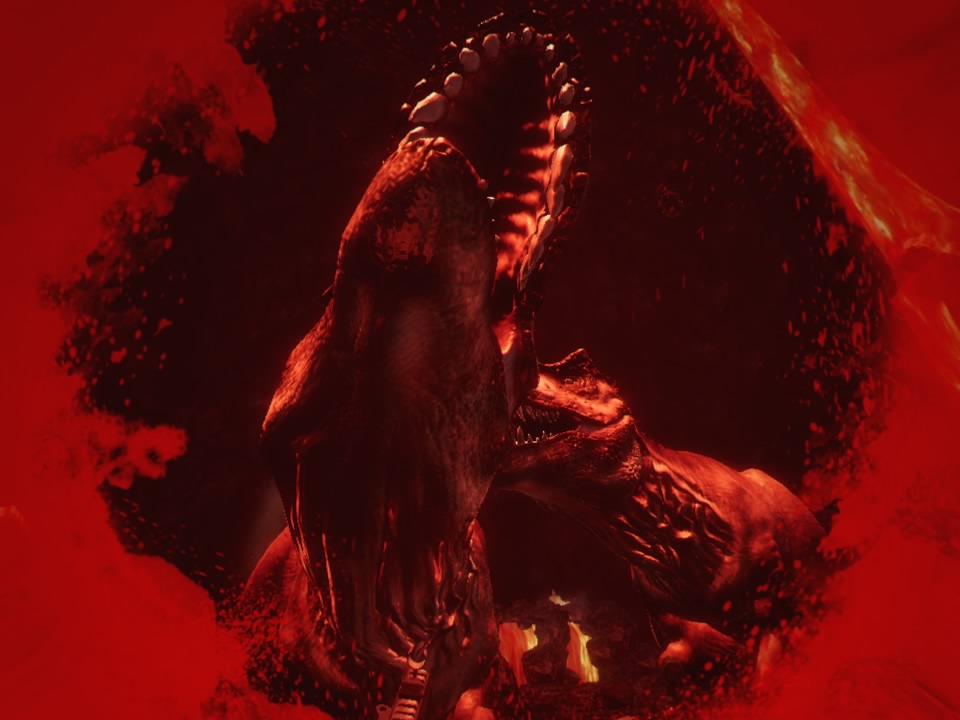 Also, you can put whatever guns you’ve unlocked into those slots and in any combination.  If you want four machine guns, that’s cool.  But if you feel like you might want a shotgun for enemies that get close or perhaps something more long ranged, explosive or futuristic then that’s all good too.   The whole set up works excellently and in the game’s more intense moments it is really enjoyable blasting away at the baddies and discarding and replacing guns without needing to look.  It’s up there with Rush of Blood and Superhot for making you feel like you’re way more badass than you really are.

Each wave of action is pretty short and there are checkpoints along the way so any failures should only involve you going back one or two waves.  At the end of a set of ten waves, you’ll unlock new weapons which has the odd effect of making the game a little bit easier as you go along although certain waves do spike the difficulty a bit especially when you get to the fourth area of each time period.  At this point you’ll get the larger enemies, and in pretty big numbers, so you’ll need to be accurate with your shooting and smart with your ammo management. 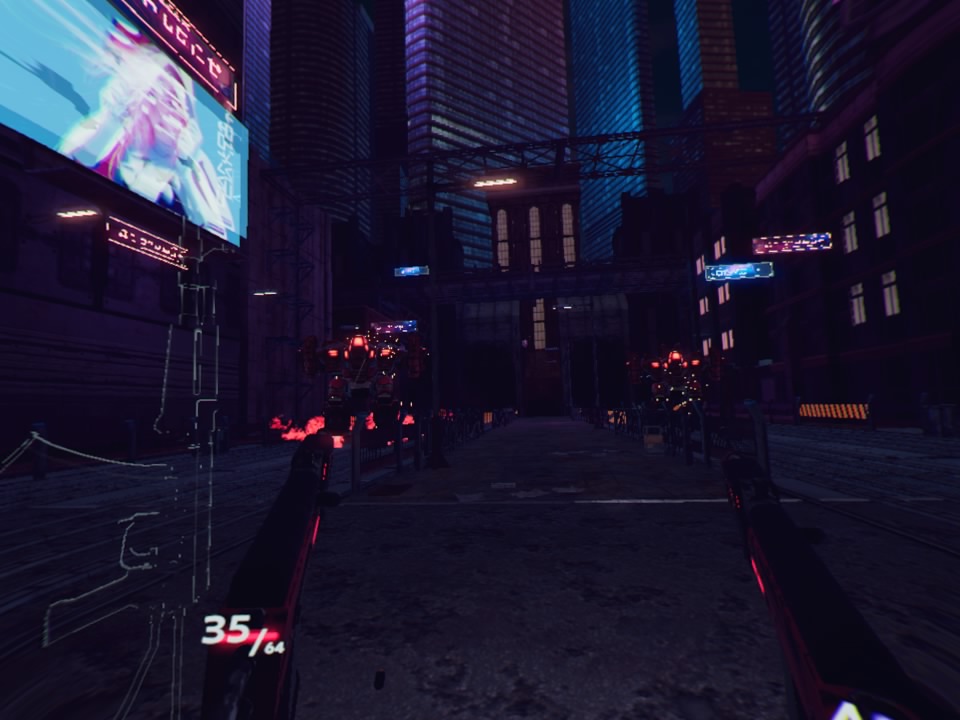 Eventually the zombie levels give way to dinosaurs, robots and animated skeletons but ultimately the behaviour of these all follow the same pattern, which is that they generally run straight at you and attempt to take out your shields.  While the bigger enemies tend to be the most intimidating, flying foes cause the most issues as they weave around in the sky attacking you from range.  Trying to manage them while making sure a giant T-Rex or robot doesn’t eat your face is definitely a challenge and that’s where the game tends to be at its best.

I’ve enjoyed the game a lot but mainly because of the controls.  The graphics aren’t exactly spectacular, even by the PSVR’s limited capabilities, and the repetitive gameplay does get old pretty quickly (older still if you’ve already played a bunch of similar VR games like we have) but the good outweighs the bad here.  It’s very much a product of where VR is at at the moment and the fact that you control a static character feels a little dated now that games like Farpoint and Arizona Sunshine have liberated us with the Aim controller but we’re fans of what Wales Interactive have done with this title.  It’s nothing special but is one of the more immediately enjoyable VR games out there.

Time Carnage
6 Overall
Pros
+ Excellent controls
+ Lots of weapons to unlock
+ Gameplay can be intense
Cons
- Visually weak
- Quite repetitive
- Enemy behaviour is too simplistic
Summary
Time Carnage may be just another wave shooter and the graphics won't be winning any awards but the smart control set up elevates it and leads to some enjoyably frantic shooting action.