They may not quite be billions but the undead threat that They Are Billions presents might be the best we’ve ever seen in any form of media.  Some might cite The Walking Dead (either as a comic or TV show), the Romero films (or the epic Dawn of the Dead remake from 2004) or World War Z (the book, definitely not the film) as the best that zombie fans can get and those are good examples (well apart from The Walking Dead TV show).  For us, the best zombie thing was probably Dead Rising (the original Xbox 360 game).  It was fun, creative and brilliant but when it comes to sheer peril and zombies being an actual threat, They Are Billions by Numantian Games is as good as it gets.

The game is primarily an RTS with a degree of survival, tower defence and resource management.  Essentially it’s a cross between the early console Command and Conquer games (especially Red Alert) along with the DNA of A Kingdom For Keflings, Age of Empires and anything with a decent horde in it.  The basic premise is that you pick a game length of up to 150 days.  The longer you pick to survive, the easier it is.  This is because while there are plenty of threats to contend with during those days, at the end a horde turns up and if you’ve not made your base watertight then you are basically getting your colony’s collective faces chewed up like beef jerky. 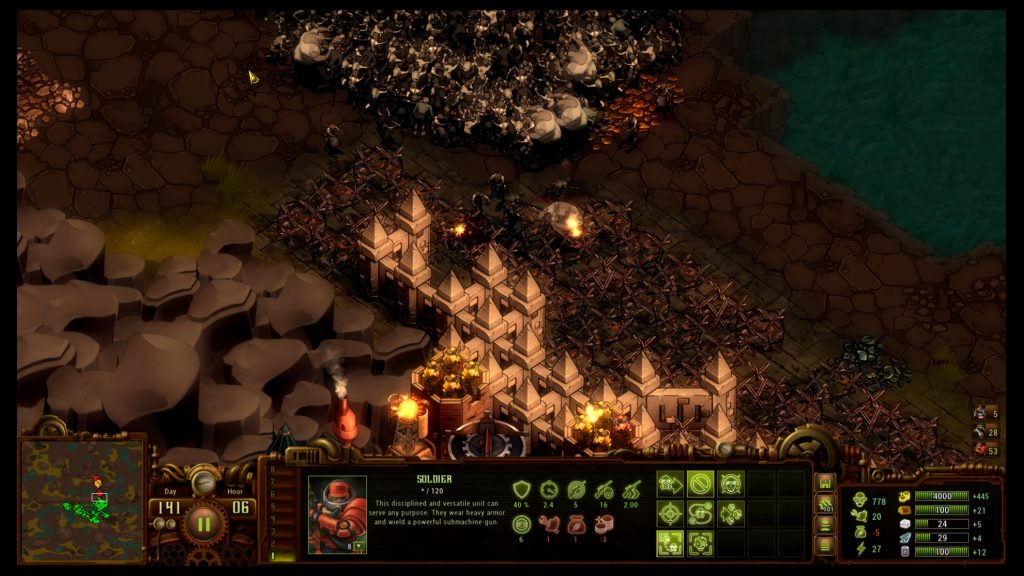 Before we get into that, we need to address the first elephant in the room which is that the game tells you NOTHING when you start.  At the time of release there is just a survival mode and a challenge of the week.  The main mode there is the former, and when you go into it you are plonked down in the middle of a randomly generated map and given a command centre.  Beyond that there’s nothing.  No tutorial mission, no written guides, no help of any sort.  There are better guides than we could ever write, and we recommend all of them, but here’s our experience.

We started on the recommended difficulty settings and started figuring out what to build.  You create buildings and these help to create various resources, all of which you’ll need.  First up you need housing as this will generate workers who are the main resource for operating other buildings and creating soldiers.  You’ll need wood (saw mill), food (fishing and hunting cabins), iron and stone (quarries), oil (oil platforms) and money (which is generated from selling excess resources and just by having people in your colony).  Once you’ve got enough of those to expand operations, you’ll need to research new technologies either related to further resource gathering, defence or attack.  There are various tech-trees to follow and it took us several aborted attempts to figure out the best way forward but we got there eventually. 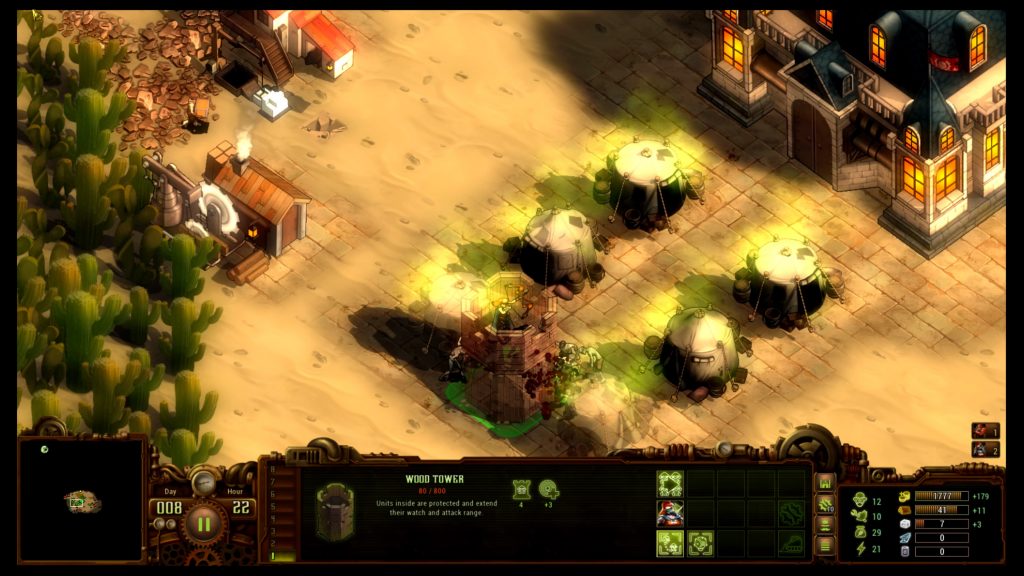 It took a while though.  Mainly, the game is pretty slow.  Getting stuff done takes a while and in real time you can lose hours and days to They Are Billions.  The game’s unforgiving save system means that you can’t afford to piss about either and so we found ourselves getting undone and this is what we were talking about in that first paragraph.  You can have a good, functional colony going on but if one zombie comes in and you miss it, then it’ll start tearing down buildings and turning the occupants into zombies too.  The infection can spread incredibly quickly and if you don’t have soldiers to hand, you’ll be done.  Game over.  Start again.

It’s not just the zombie threat that can scupper you though.  The maps are randomly generated and if you’re not near enough to some good resources, you may as well restart.  If you’ve got too many ways in to your base?  Start again.  Giant zombie village one screen away from your start location?  Start again.  These are all lessons that are hard-learned when you’re trying to get started. 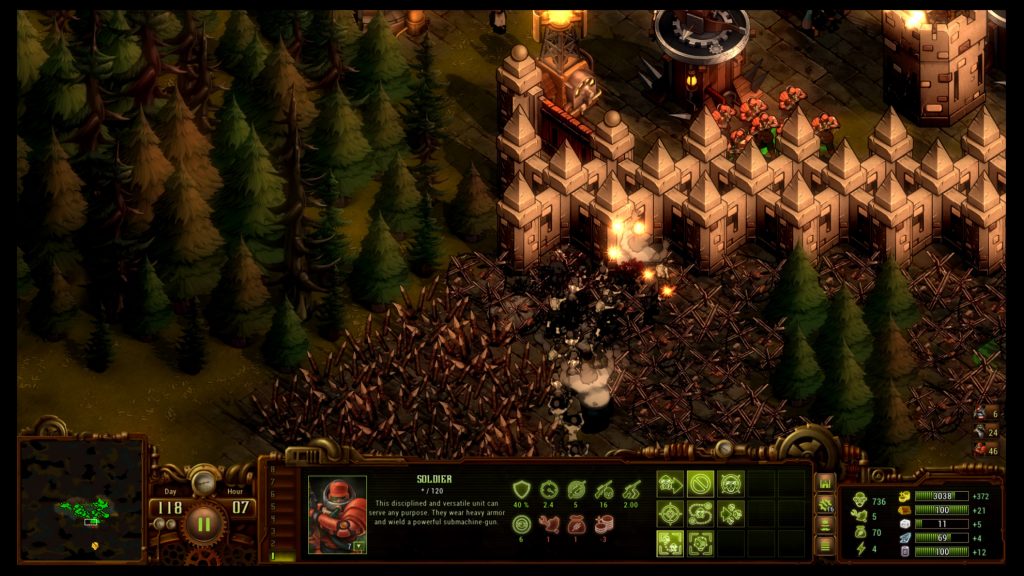 Eventually we got our heads around it and made progress.  The way the game works is that your map is full of zombies but at set intervals the game will send a bastard zombie horde at you from outside of one of the corners or middle edges of the map.  These get bigger each time, testing you in new ways.   You’ll realise you can’t afford to have any gaps in your defence.  At the end though they’ll send enemies in from all directions, in a giant horde far worse than anything you’ve seen until that point.  The first time we got that far it was game over.  Several hours of progress lost and our patience wearing thing.

However, we got there in the end.   There may not be different paths to success.  We suspect that if you want to do well you need to follow the same general plan, getting the same general technologies as you go along.  Surviving to the end is an amazing feeling though.  The game may not have billions of enemies but you’ll be facing hundreds of them in those closing minutes and it’s a spectacular and terrifying proposition as you hope that your defences are solid enough to keep the undead bastards out.

When it does, They Are Billions feels unlike any other game.  Sure, we played it on 22% difficulty thanks to the modifiers we chose but if you want to complete this game for review purposes then you need to eat a whole vat of humble pie and yet we still feel like grizzled veterans. 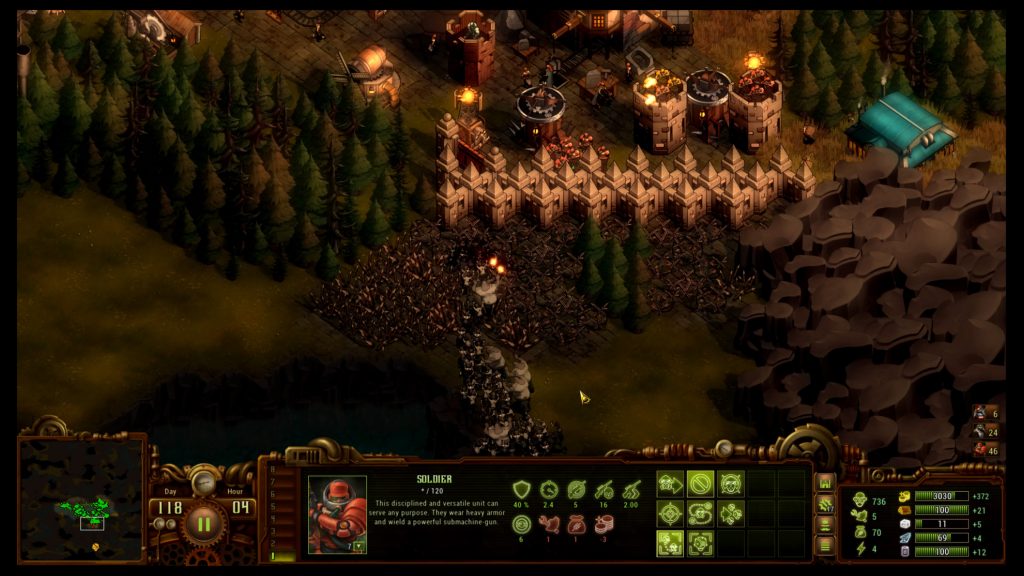 To its credit, the game has survived the trip to consoleland quite well.  The PC’s campaign mode is absent but presumably due to be patched in and we’re missing some units as this appears to be the vanilla version of the game but the controls work well (after a little adjustment, mouse and keyboard is an option though) and the giant horde only messes with performance if you’ve got the screen zoomed right out at the end when there are over a thousand zombies on the screen.

The presentation is pretty sparse, with simple menus and lots of dark visuals.  Once you get into the game it has a clean, isometric graphic style that looks better the more you zoom in.  People have complained that it can be a little cluttered and yes it is.  You’ll need to know the layout of your base, because trying to find that last cottage that you want to upgrade to a stone house is tricky when you can’t find it among all the other structures but, for the most part, we were never let down by the game’s visual style.  And, of course, when there are just a ton of zombies there, that’s the pay off.  And something that no other RTS can give you. 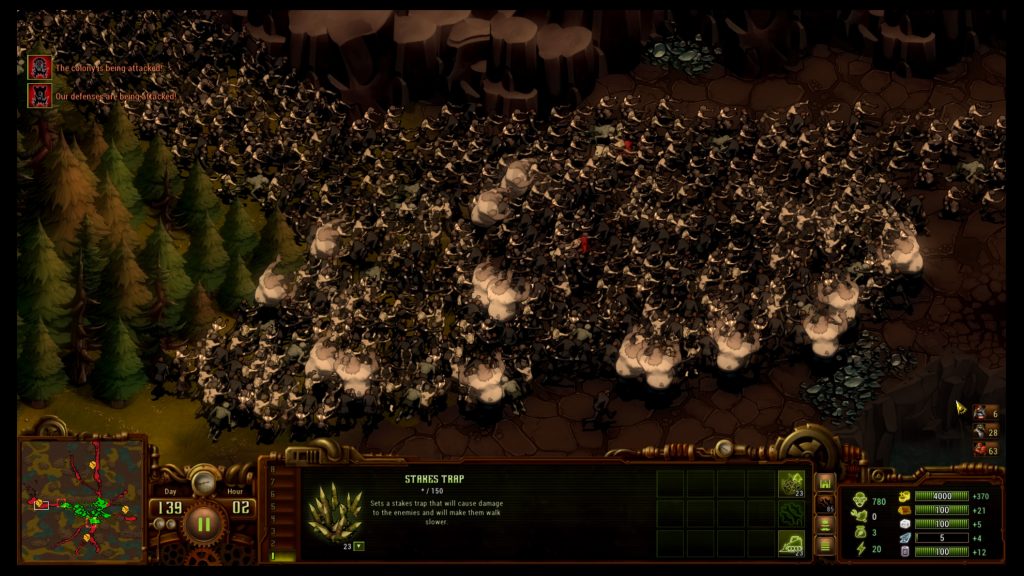 Having spent a lot of hours with the game, we feel smug that we’ve survived a couple of times now.  We’ll never get those trophies completed because frankly we can’t even understand how they are possible but we’re sat here writing this and feeling good about They Are Billions.  But we do need to remember the endless restarts, the harsh learning curve and the frankly unfair nature of the game.  The harsh saving system seems punitive, mocking you for thinking that there are mulligans in the world of zombie survival and maybe they are right but I can see a lot of beginners suffering from some serious buyer’s remorse if they go into this expecting to have fun immediately.

If you can survive the early trauma this game inflicts on you, and you don’t have a PC to play it on, then They Are Billions is a tough, rewarding RTS that is, from a resource management point of view, kind of accessible and when you’ve got a screen full of zombies being repelled by a few stone walls, floor traps and a handful of soldiers, it feels like the sentry turret bit from Aliens but even more intense.  Because of that we’re choosing to like the game but fucking hell it really, really didn’t help us to get to that conclusion.

They Are Billions
8 Overall
Pros
+ The best use of zombies in a game
+ Genuinely rewarding and worrying in equal measure
+ Good units and buildings
+ Savagely addictive
Cons
- Very hard to get into
- Eats time
- Save system feels punitive
- Survival can depend a little too much on getting a nice map roll
Summary
If you can get past the almost hostile learning curve, and that's a BIG if, then They Are Billions offers a unique take on the RTS genre and one of the most thrilling, and scary, zombie experiences you can have in a game. There are concerns over the lack of a tutorial, the effectiveness of the map generator and the absolutely mad difficulty curve but if you survive, maybe you'll catch some of this Stockholm Syndrome too.

One thought on “They Are Billions – PS4 Review”