I swear there was a point in the 90’s where Japanese game shows like Endurance got a lot of curious late night coverage. The last one to truly transition over here was probable Hole in the Wall. The premise was easy enough to grasp with contestants trying to fit themselves through a hole in a polystyrene wall. It was daft fun to watch and I’m surprised it only ran for two series. Anyway, this digression is a long-winded way of telling you Monster Couch made a game based around it. Tetsumo Party looks to take the concept to your screens without needing to don a bodysuit and get wet. 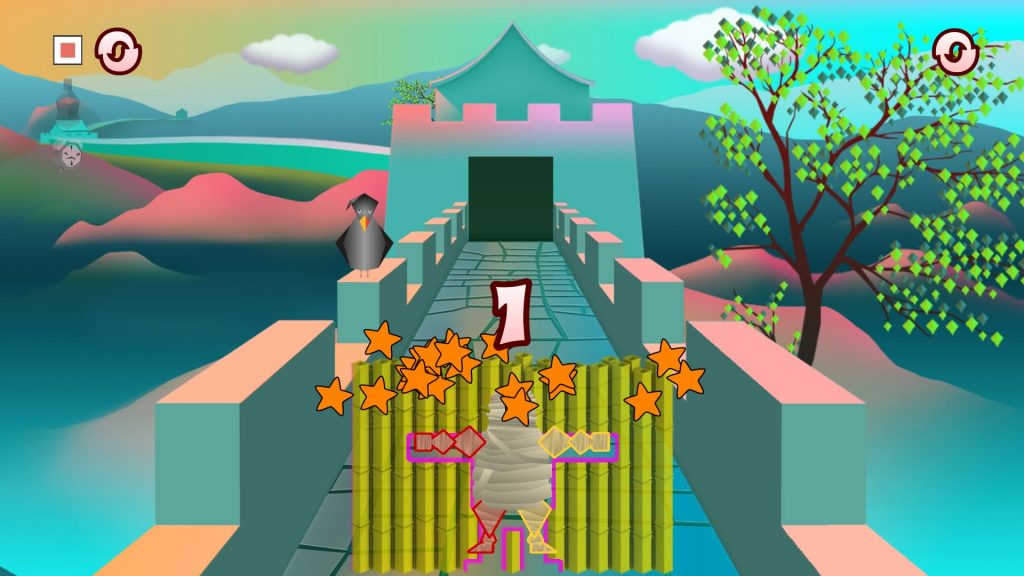 Tetsumo Party‘s controls are simple. Each of the shoulder buttons correspond to a limb and you cycle through positions before settling on the one the wall is asking of you. The first one’s always a freebie but, as the speed increases, you can find yourself being pressured into daft errors. There’s a gentle enough ramp and I did find myself getting better with time. Recognising the shapes you need to make and then executing in the nick of time can feel great. It’s all easy enough to grasp and the controls behave themselves to allow your full attention to focus on the approaching wall.

There’s power ups on offer to give you an edge. Green tea can give you the strength to smash through walls whilst clocks extend your time. You can choose to ignore them, especially if you’re out of position to pluck them from the helpful waiter’s hands. Completing walls whilst under the influence of tea entices you by offering double points. 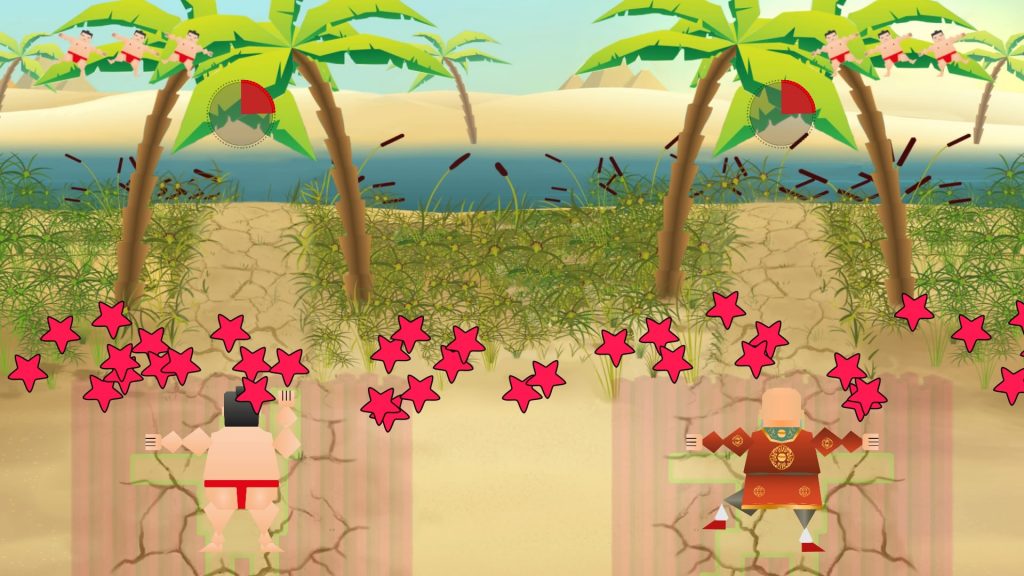 The single player offering pits you against an infinite wall until your inevitable failure. You can pick one of ten contestants that each have their own trio of trophies to grind. They unlock courtesy of sushi you can grab during each stage. It does offer you a reason to return although gaining the sushi to unlock the full cast takes just a few hours. On top of that, the characters often feel more like a cosmetic choice rather than a mechanical one. The short nature of the rounds and the quick restarts do help the game keep flowing. It’s something of a saving grace when, once the characters are unlocked, the solo experience can feel a little empty and brief.

Tetsumo Party really starts to shine when others are involved. You can compete directly with up to three others. Combatants take on the wall in split-screen and the winner is decided once all three of their lives are depleted. It makes a change from the single player which is over after the single failure. It gives the game a chance to pivot and build before the match eventually concludes. It means they can also go further than the swift solo stages. It’s where most of your time will most likely be spent as you fumble past obstacles. 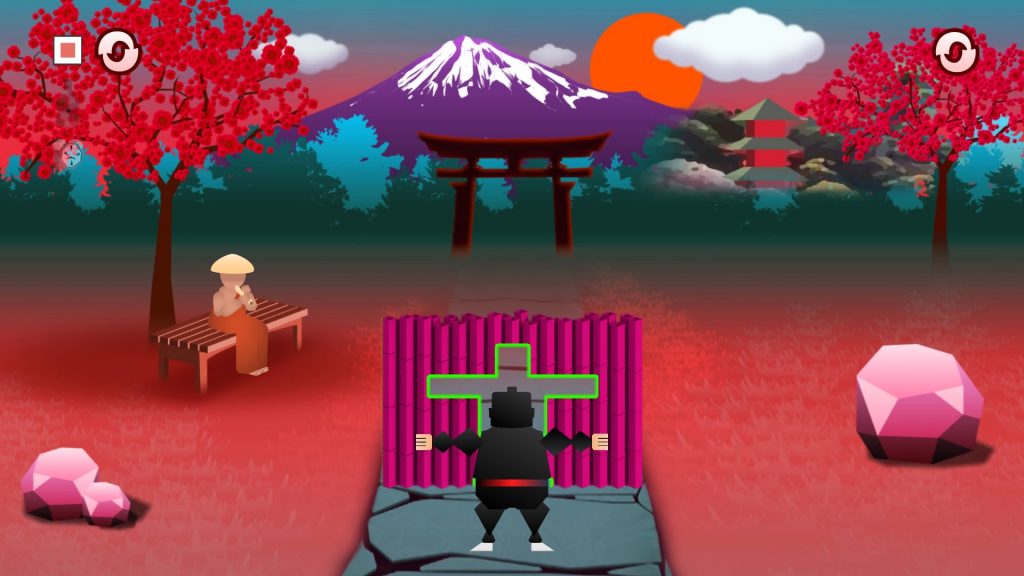 You also have the option to cooperate. Each player will share a body and, as a consequence, they’ll take charge of one or more limbs. As more walls are cleared, the duties will switch which brings with it a nice sense of chaos. Trying to coordinate whilst time is of the essence can put friendships to the test and really give this game the spark solo play lacks.

Tetsumo Party‘s aesthetic is a little too simplistic for my liking. Characters look blocky, triangular and they all function the same way. Backgrounds and characters are strictly two-dimensional and, whilst they’re colourful, they look flat. They’re animated but not enough to really distract you from the task at hand. Player models have a segmented quality to them that helps display the the points of articulation on the limbs. It’s functional at best with none of it ever looking great. The occasional stage transition manages to show something interesting but, you’re mostly looking at a pretty bland, harsh treatment. 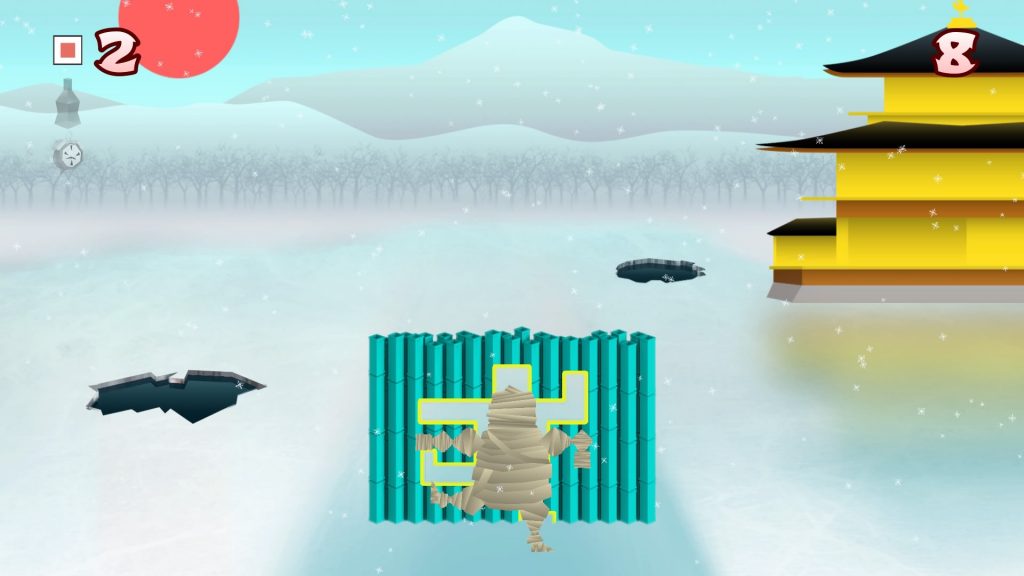 It would’ve been nice to see something a little smoother but at least the sound’s well done. The Japanese game show approach gives the announcer and audience opportunities to react to your performance. They’ll repeat quickly but there’s little flourishes in there that at least give the game a sense of charm.

There’s not a lot else to say about Tetsumo Party. It’s effectively a mini-game at the smallest price they could possibly make it. There is a flow on display that does lend itself well to quick, sharp bursts but it’s not deep enough to extend beyond half-hour stints. I find the visuals to be flat and uninspiring but the concept works well.

Tetsumo Party
6 Overall
Pros
+ Simple to grasp with a swift pacing.
+ Controls are consistent and allow you to focus.
+ Co-op is delightfully mad.
+ Cheap price tag.
Cons
- The visuals look too angular and harsh to me.
- A very slim package that feels like a proof of concept.
- Single player can run out of steam quickly.
Summary
Tetsumo Party does offer some thrills, despite the small package and cheap price tag. There's fun to be had with a chaotic coop mode and single player does offer some returning value. It runs out of gas fairly quickly but, in short bursts, it can be enjoyable. I do wish the game was more pleasing to look at but there's definitely something to this. Pity there's not more meat to it.