Sometimes, it’s worth not judging a game by screenshots. My first glimpse of The Serpent Rogue had me making assumptions about what kind of game it was going to be. As it turns out, this effort about crafting and discovery turned out a lot more mellow than I was expecting. I imagine Ukrainian developer Sengi Games have other things on their mind but, despite difficult circumstances, they’ve produced something interesting. 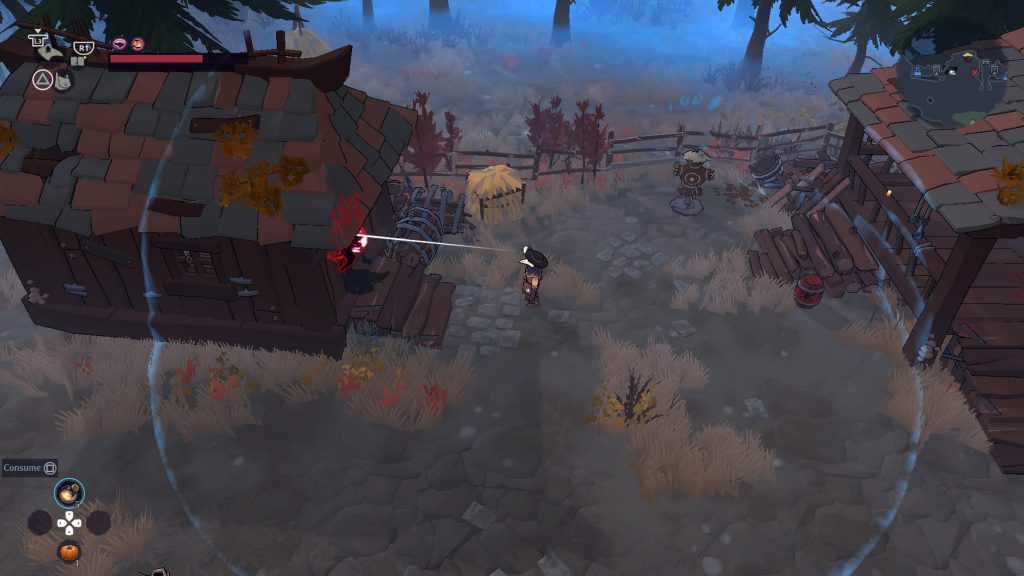 The story of The Serpent Rogue follows a nameless Warden through a ruined world. There’s a corruption spreading across the land and it’s the player’s job to fix that. Warden’s are Alchemists by trade so potion-brewing and helping others is on the agenda. You’re given a little guidance from Solomon, a fellow Warden who points you in the right direction. As for the rest of the story, it’s largely told within tomes that you can pick up on your journey. It’s very hands-off and, in terms of events, the narrative is kept fairly slim. I don’t think the game truly misses out on having a back seated plot as it gives the gameplay a chance to shine.

Our Warden has a health bar and stamina meter but this game is a lot more focused on exploration. The stamina meter doubles up as a way to represent hunger. You can spend this meter to sprint and attack but it’s also linked with your health. Should you take damage, your hunger meter can replenish it over time. Giving the two meters a symbiotic relationship is a nice touch and not one I’ve seen anywhere before. 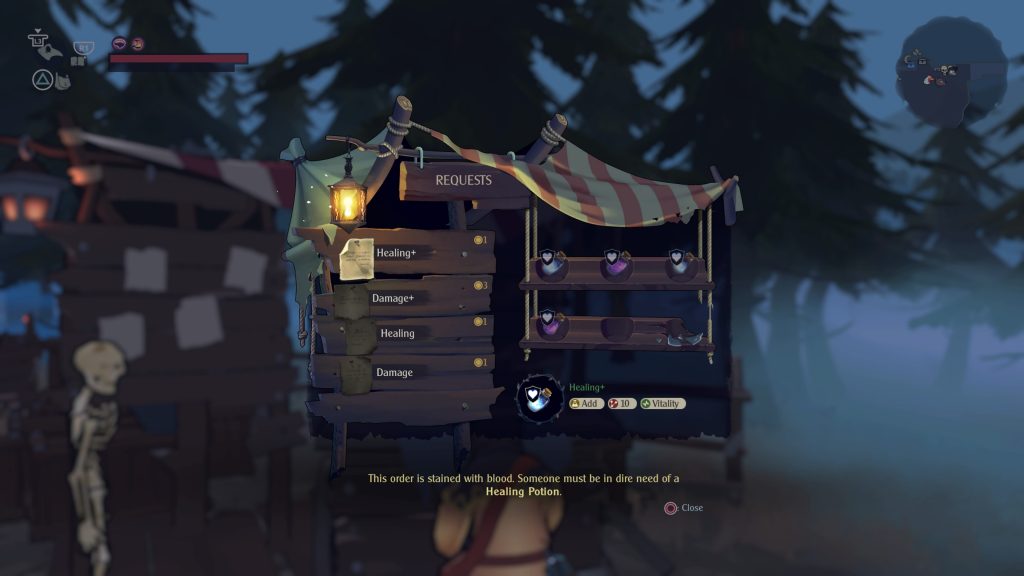 You cannot die from an empty stomach but an empty bar does limit your ability to evade trouble. Combat is there but it doesn’t feel like the focus. You can attack and block with the shoulder buttons but enemies have telegraphed attacks to comfortably move out the way of. There are small opportunities to stealth which gives the chance to discover new species or move about the landscape without too much trouble. Running away is a viable option. Even on low stamina, nothing can outrun the Warden and there’s even the luxury of fast travel.

Primarily, The Serpent Rogue deals in crafting, completing quests and discovery. As well as potions, food can be  cooked and weapons can be forged. There’s a few recipes to pick up which unlock the knowledge to craft new items. Recipes are very specific so paying attention to the order of ingredients is important. You can create potions without the knowledge but you run the risk of them being sloppy and ineffective. Originally, I wondered how complex these recipes would get but they rarely advance beyond simple combinations.

The corrupted landscape of The Serpent Rogue is surprisingly dense. Mechanically, there’s a lot of little considerations that keep you involved. There’s chests to uncover, some of which are locked and hold plenty of goodies. You can regularly send off potions from the kiosk for some coin which can then be spent at a fountain, a merchant or to buy followers. These are needed to carry equipment, can fight for you and help in other grunt work. You can also feed them which follows the same rules as your own upkeep. It’s nice to know there’s very little maintenance and you can always send followers back to base. 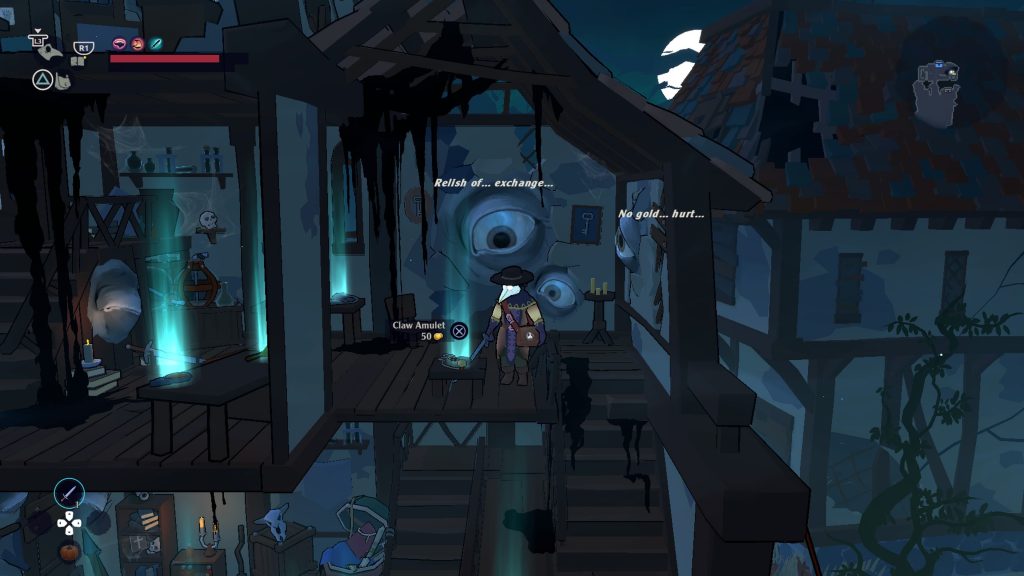 Quests come frequently with them often pointing you towards the bigger picture. Your primary goal is to deal with the land’s corruption and you’re prodded towards it in some interesting ways. Some solutions can be binary. When dealing with corrupted creatures, you can pacify them or take the more violent approach. Either way is viable but I found one early obstacle was solved without needing to engage with them. There is some conflict between creatures in the hostile areas, so maybe that’s a third route?

I do think players might struggle to get their bearings a little. Tutorial boxes do explain the core mechanics succinctly but I don’t feel you get pushed down a critical progression path. There’s not many areas to explore but they do have plenty to get on with. Most of it seems repeatable so you can grind out coins if the situation requires it. The Serpent Rogue‘s not a game out to trick players but it does, much like it’s approach to story, not want to intrude too much. Even death isn’t too much of a hassle. Dying gives you the opportunity to recover inventory in a corpse run but most of the crucial stuff can be brewed, smelted or purchased. I feel I don’t have to rush to get my satchel back. Unfortunately, I find the random generation of locations to be a little disorientating and it can be frustrating when you’re on the hunt for specific items.

The Serpent Rogue is beautiful to look at. It deals in a lot of muted tones but it allows for the more colourful elements to really stand out. I find the animations to be really fluid and and it does wonders to portray some great charm. Human characters appear faceless but they have a good sense of identity from the way they dress to their little moments of chatter. There’s also chances taken to frame scenes well. The climax exemplifies this perfectly but there’s some details that really portray a quiet polish.  Even the clockwork nature of the townsfolk gives the game some sense of routine and life. 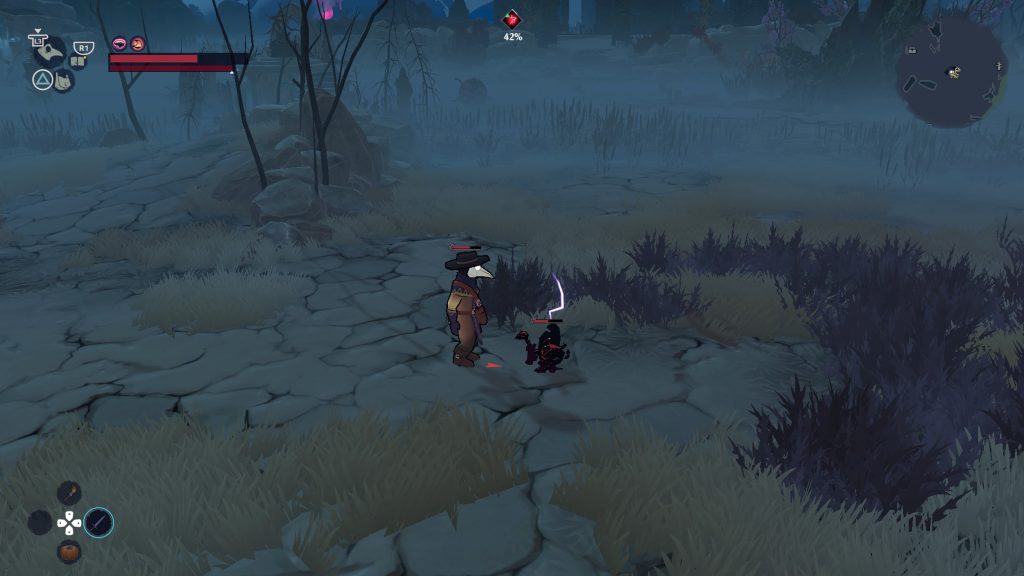 Musically, it’s well done. Each area has it’s own musical score that seems to gel with the surroundings. Swamps are typically murky whilst the safe zones are given this sweltering, ominous soundtrack. There is a polish to The Serpent Rogue that is greatly appreciated. Characters have an onomatopoeic babble that’s quite charming to hear and sound effects work well to inform you of incoming and outgoing events.

Truth be told, The Serpent Rogue caught me by surprise. It’s a well crafted, slower paced adventure that focuses deeply on its mechanics. At times it can be daunting and develop into a grind but there’s a charm to the presentation. Once I gained a foothold, it was hard for me to ignore the smart ideas on display.

The Serpent Rogue
7 Overall
Pros
+ Polished presentation with detailed visuals.
+ Mechanically dense.
+ Charming characters.
+ Moves at a relaxed pace.
Cons
- Controls seem a little compromised on controller.
- Definitely has the potential for grind.
- Random generation can scupper progress when you've already mapped out an area.
- Can be tricky for new players to gain a foothold.
Summary
The Serpent Rogue is a clever little title that has plenty of polish. Whilst it can be a little tricky to gain a foothold, I found plenty to discover and do within what is admittedly a small world. There's some nice ideas on display and the presentation helps keep things relaxed and charming.   Completing objectives feels rewarding and discovering new recipes can sometimes feel essential.  This will not be to everyone's tastes but I enjoyed most of my time with it.

One thought on “The Serpent Rogue – PS5 Review”